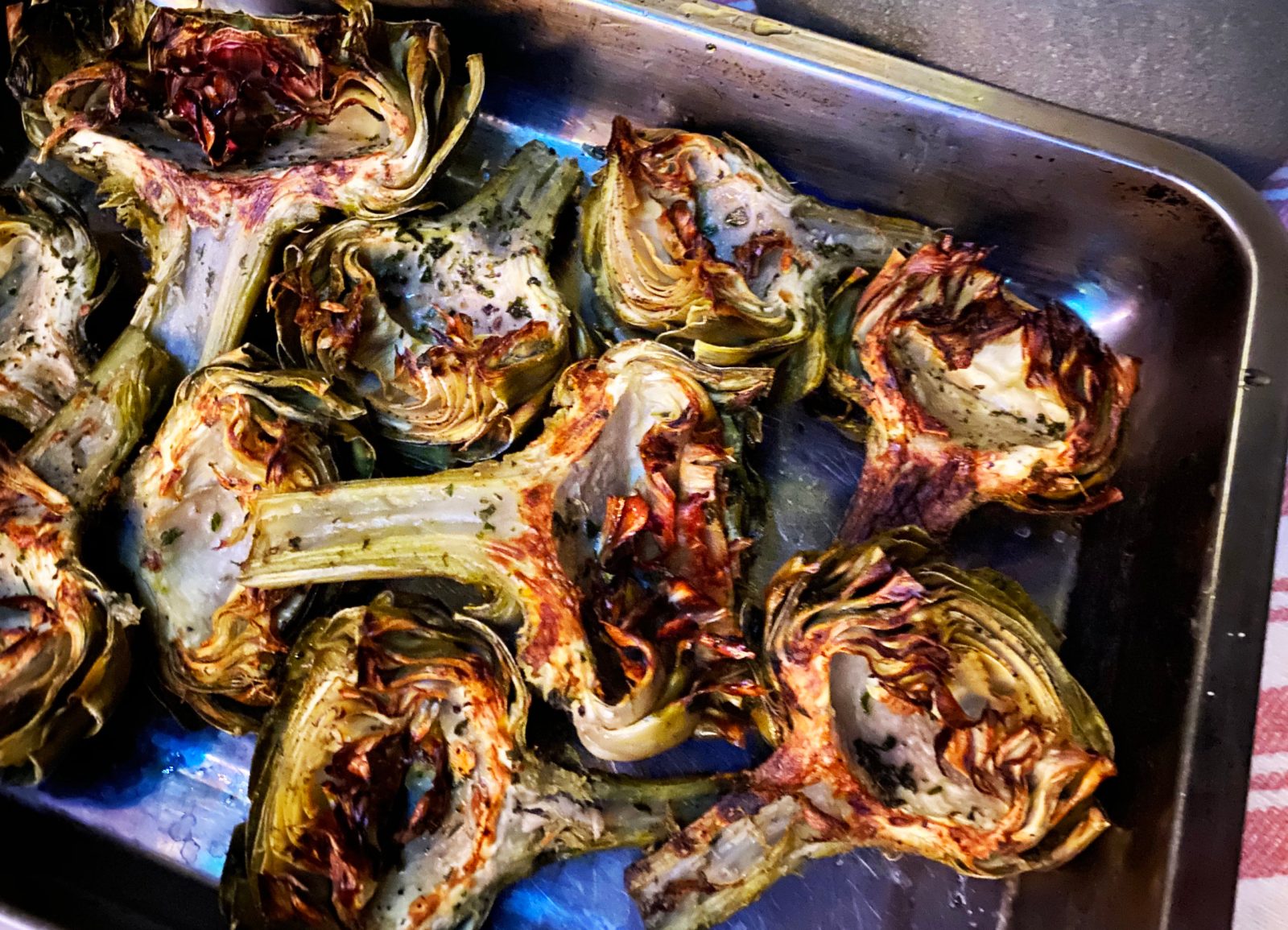 In this recipe, artichokes are first steamed over aromatics simmering in water, then basted and finished over hot coals. (Photo: Tony Jackman)

Artichokes are in their glorious season. They need time and effort but are generous in their reward.

There are differing schools of thought regarding peeling an artichoke before cooking. In the traditional school you would pare away most of the outer bracts (leaves). The other way, of leaving most of them intact, takes into account that you will not eat the outer bracts, only the soft flesh at their base. As you eat closer to the artichoke heart, more and more of the leaf is edible.

The choke (see the concave area in the photo where they were) must be scooped out, or it will live up to its name when you eat it.

Squeezing lemon juice over the cut half and snipped bracts avoids discolouration.

The feathery crown of fibres, if eaten, will quickly demonstrate why it is called the choke. Yet it is the choke that would burst forth into that glamorous flower.

The rest of the bud, even the oft maligned outer bracts, brings the reward. Traditional chefs will peel away a great deal of them because they are mostly hard and inedible. But, steamed for 45 minutes over water containing aromatics, and even the base of the hardest outer leaves will hold a little morself to be scraped off with your teeth.

As you venture further in, the bracts become more tender until you’re eating the leaves whole. Finally, you reach the heart, buttery soft and luscious, and nirvana is yours.

3 Tbsp fresh oregano or thyme (or both), very finely chopped

Fill a pot with 3 cm of water, add bay leaves and peeled garlic cloves, cut in half. Put artichoke halves in a steamer over the water, cover, bring to a boil. Reduce to a simmer and steam for 45 minutes. Set aside to cool, then scoop out all of the choke, but not the heart alongside it.

Place chopped herbs in a small pot, pour over olive oil, and heat but do not boil. Remove from heat and set aside to steep.

Brush cut sides of artichokes with baste, salt and pepper lightly, and braai over hot coals, cut side down, just long enough to get a nice char. Handle gently with tongs, but my test run confirmed that cooked artichokes can hold themselves together on hot coals as long as you’re not heavy-handed. Alternatively, put them under the grill for a few minutes, cut side facing the heat. DM/TGIFood

Send your Lockdown Recipes to [email protected] with a hi-resolution horizontal (landscape) photo.