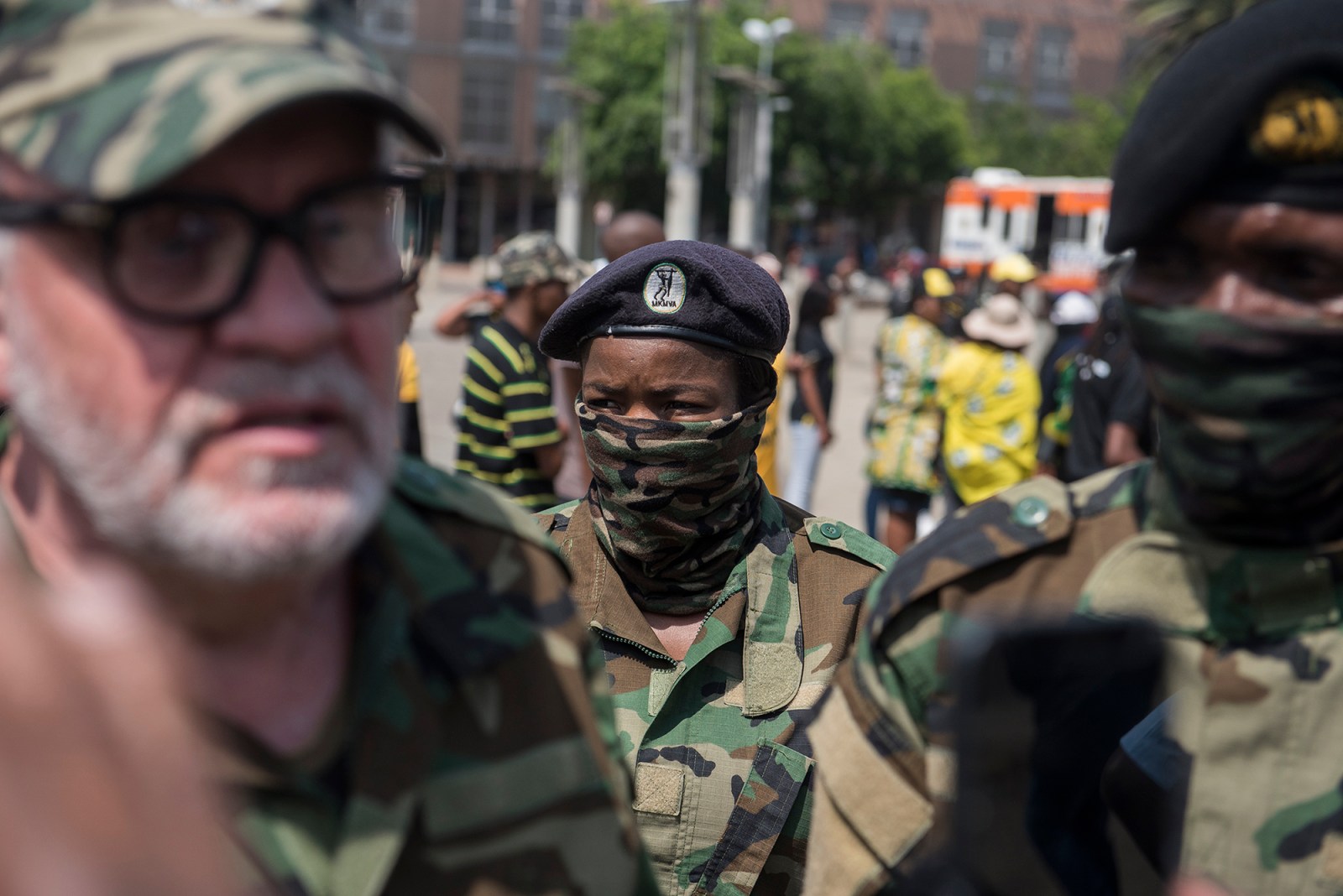 Members of the Umkhonto weSizwe Military Veterans' Association at a march at Mary Fitzgerald Square in Newtown, Johannesburg. The march was organised by the MKMVA in support of Jacob Zuma, RET interests and Ace Magashule. Photo / Shiraaz Mohamed

A group calling itself Radical Economic Transformation, led by the Umkhonto weSizwe Military Veterans' Association (MKMVA), protested against what they called the continued ‘persecution’ of former president Jacob Zuma through state instruments and for the Zondo Commission to be dissolved.

A small group, clad in ANC and MKMVA regalia, assembled at the Mary Fitzgerald Square in Newtown, Johannesburg, on Friday 9 October, before marching to the Zondo Commission, which is sitting in Braamfontein. They called on Deputy Chief Justice Raymond Zondo to recuse himself because of alleged bias against Zuma. And they claimed the sole purpose of the commission was to attack Zuma and suppress radical economic transformation (RET) interests.

Speaking at Mary Fitzgerald Square, Zuma loyalist and MKMVA spokesperson Carl Niehaus claimed the commission was selective in the way it deals with information.

“What we are doing here today is to fight for the true revolutionary heart of the ANC… We are here to say the ANC should return to its roots.”

Niehaus also used the opportunity to try to drum up support for ANC secretary-general Ace Magashule. It comes in the wake of refuted media reports that a warrant of arrest had been issued for Magashule  over the controversial Vrede Dairy Farm project. The Hawks have distanced themselves from the reports, saying no warrant has been issued.

“Magashule has made it his life’s task to push for RET,” Niehaus claimed, adding that opponents of RET wanted to get Magashule charged so that he could then also be forced to step aside.

In closing his speech, Niehaus ended with a threat: “Touch Zuma and Magashule and incur our wrath.”

He said Imbumba “represents business forums” and was against the continued persecution of black leaders such as Zuma.

The group said that it would ask Chief Justice Mogoeng Mogoeng to remove Justice Zondo, or that he be forced to recuse himself and for the commission to be dissolved.

Zuma supporter Bongani Mbebe, who said he had come from Cape Town, told Daily Maverick that he was also there for RET interests and Magashule. He said Magashule played a huge role in ensuring that the organisation functioned properly.

“We do not expect Magashule to go to jail; if he goes, we will go with him. Both Zuma and Magashule do not deserve this treatment as they gave their lives for the liberation of the people of this country,” said Mbebe.

Mbebe said they were not against the arrest of wrongdoers, but were concerned that when it came to Zuma and Magashule, there seemed to be an obvious conspiracy.

The group proceeded to the Zondo Commission, where they protested outside and handed over a memorandum. DM