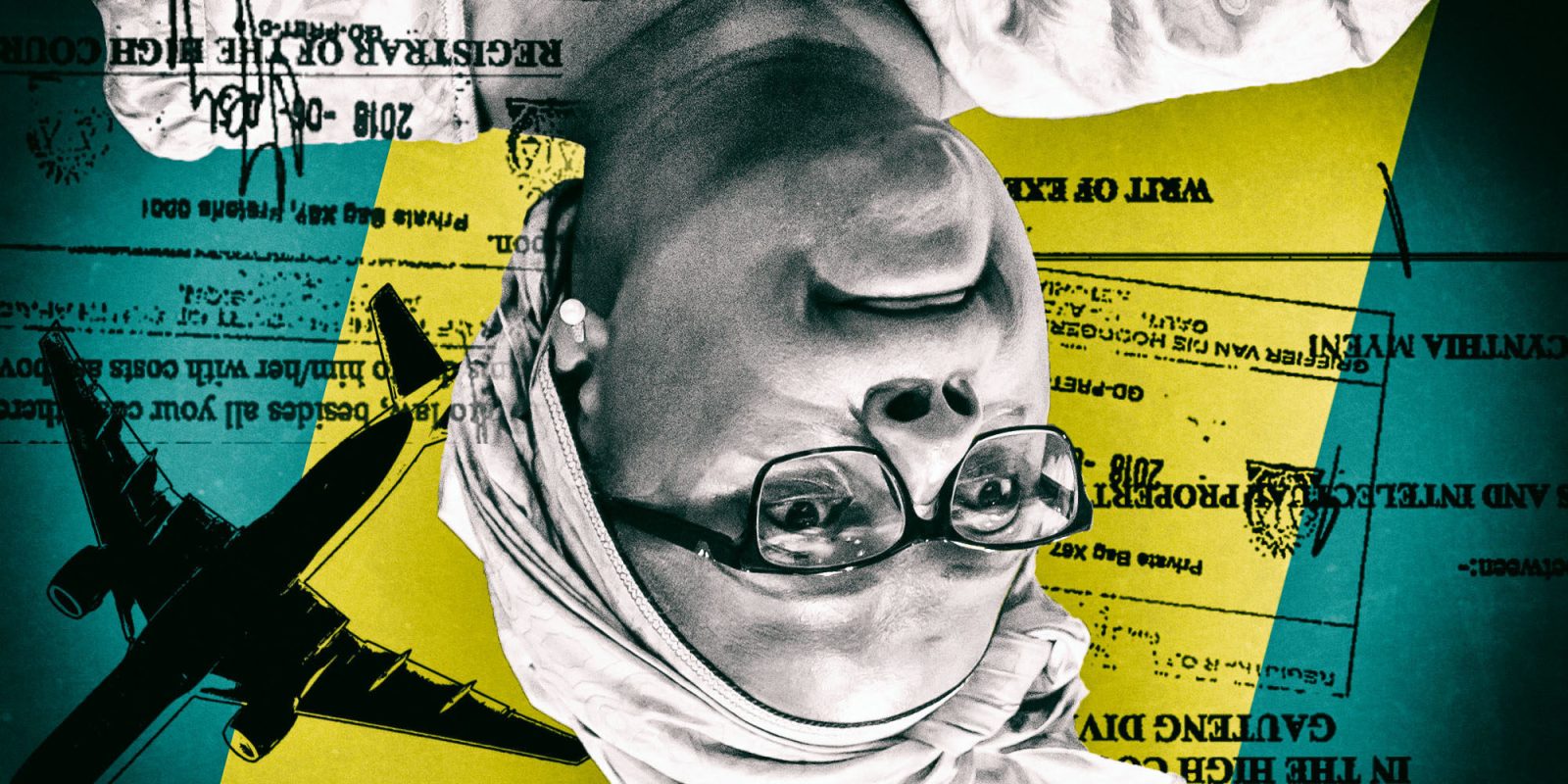 Heads of argument filed in September show that Dudu Myeni is eyeing an extended appeal process of up to three years that she thinks will reach the Constitutional Court. Such an appeal would allow her to hold on to the earnings from her role as deputy chairperson of electricity distribution company Centlec.

Former SAA chairperson Dudu Myeni has launched a blistering attack on the judge who declared her a delinquent director for life, arguing that there were many mistakes in the judgment.

Advocates Dali Mpofu, Nqabayethu Buthelezi and Noxolo Kekana, on behalf of Myeni, use the phrase the “learned judge erred” 10 times in a heads of argument document dated 25 September as Myeni looks to overturn the ruling issued by Judge Ronel Tolmay in the North Gauteng High Court on 27 May.

They denied that she took personal advantage of information gleaned while an SAA director, harmed the now-bankrupt state airline and engaged in grossly negligent misconduct. Myeni intimated that she would take the appeal process to the Constitutional Court, stating that she could take the case to “the highest court in the land”.

She filed a leave to appeal application against the judgment on 18 June.

The Organisation Undoing Tax Abuse (Outa) and the South African Airways Pilots’ Association (Saapa), which brought the application to declare Myeni a delinquent director, on 23 June filed a notice of opposition to that appeal.

Outa’s head of legal affairs, Stefanie Fick, told Daily Maverick on Thursday that the watchdog was looking forward to arguing about Myeni’s leave to appeal application and Outa’s primary and alternative enforcement applications.

The watchdog filed its heads of argument on 4 September.

Myeni said that Tolmay made a mistake when finding that she had acted on unlawful instructions of former President Jacob Zuma and that those instructions were immaterial to the case.

She said the judge had set a “crucial precedent” based on limited jurisprudence by allowing Outa to proceed with the case despite section 162 of the Companies Act specifically excluding public interest litigants from relief.

Myeni argued that the Companies Act provided for the removal of directors, but did not allow any standing for those acting in the public interest.

That she never challenged the standing of Saapa did not resolve the question about whether the judge was correct in granting Outa standing before the court, Myeni said. Outa allegedly ran a hostile media campaign against her by using their “illegitimate standing” granted to the watchdog by the court, she added.

This situation was “extremely prejudicial” and violated her constitutional rights to a good name, Myeni claimed. The judge in the case Frothingham vs Melon found that the notion of a taxpayer acting in the public interest was an “abstract interest”, she said.

“It would be untenable to contend that every taxpayer had a right to challenge a law as unconstitutional,” Myeni added.

She took exception to the fact that Tolmay had disregarded evidence that she felt was crucial to the matter of disproving Outa and Saapa’s allegations. The judge erred in finding that Myeni attempted to renegotiate the Airbus swap transaction when there was no such evidence proven during the trial, she said. The evidence was clear that the SAA directors at the time, John Tambi and Yakhe Kwinana, were the ones leading the negotiations with Airbus, she added.

The Airbus deal was an agreement between SAA and Airbus in 2015 to cancel a contract to buy 10 Airbus A320-200s and to substitute it with a new deal for SAA to lease five Airbus A330-300 aircraft.

This deal would have allowed SAA to save money and avoid significant impairments that would have resulted from failing to accept delivery of the Airbus A320-200s.

Myeni claimed bias on behalf of the judge as she had allegedly copied from Outa and Saapa’s legal documents, including at least 265 of the 285 paragraphs of the judgment.

The higher courts had discouraged this type of judgment, she added. Imposing of the delinquent director for life ruling was harsh, which would permanently impair her livelihood, Myeni said.

According to her, such a sanction was unprecedented and unwarranted in the circumstances. The sanction constituted a prima facie violation of her rights as enshrined in the Constitution, which provided that every citizen could choose their trade, occupation or profession freely, she said.

The case had several novel aspects, so there were compelling reasons for a higher court to hear the appeal, she added.

Tolmay ordered that the court refer to her 27 May ruling, and the evidence led in the case to the National Prosecuting Authority (NPA) to probe for criminal conduct.

Myeni opposes the judge’s referral to the NPA

But Myeni argued that there was no finding or evidence about her criminal conduct. The referral of the matter to the NPA smacked of possible further punishment on top of the life ban, she said.

This situation could cause double jeopardy or punishment, she said.

She objected to the judge ordering that the other SAA board members be included in the investigation by the NPA, but the judge failed to require Outa and Saapa to join these directors to the case.

The evidence in the matter showed that there were leadership tussles at SAA, where the board and the executives were repeatedly at odds over various deals, Myeni said.

These differences culminated in the SAA executives clubbing together to testify against Myeni in what was “a witch-hunt”, she said.

Regarding the Emirates Memorandum of Understanding (MOU), Myeni said that it was apparent from the evidence at trial that the SAA executives had abdicated their responsibility to conclude the MOU, and conveniently shifted the blame for their lack of competence to her.

The Emirates MOU dealt with a proposed code-share agreement, which in 2015 was worth an estimated R1.5-billion to SAA.

Turning to the Airbus swap transaction, Myeni said that all the allegations were flawed as Outa and Saapa had failed to recognise her capacity as SAA chairperson.

All of Outa and Saapa’s allegations reflected a “fundamental misunderstanding” of the Public Finance Management Act (PFMA) in that they failed to understand the definition of “accounting authority”, Myeni said.

The PFMA defined the accounting authority of a state company as its board, she added. The failure by Outa and Saapa to draw this crucial distinction was fatal to their case in its entirety, Myeni said.

In response to Outa’s application to have her relinquish all her board positions, she said her role as deputy chairperson of the board of Centlec – the Free State state-owned electricity distribution company – in particular, was not harmful to the public or the company. “The perceived harm is speculative,” she added.

Myeni’s remuneration from Centlec was a significant part of her livelihood and those of her dependents, she said. She earned a salary of about R274,000 from Centlec in its 2018 financial year. It was “absurd” for Outa and Saapa to assert that any court of law could find that Myeni would suffer no irreparable harm if these earnings were removed for the up to three years the appeal process could last, she said.

Outa and Saapa have an alternative constitutional challenge to remove Myeni from all her directorships.

“The constitutional challenge is so patently devoid of merit,” Myeni said.

The court ought to grant leave to appeal to the Supreme Court of Appeal, given the weight and complexity of the grounds of appeal, Myeni said. In closing, the three advocates on behalf of Myeni said that the high court should grant her leave to appeal, dismiss Outa and Saapa’s enforcement application and that the court should block alternative constitutional challenges aimed at enforcing the 27 May ruling. DM