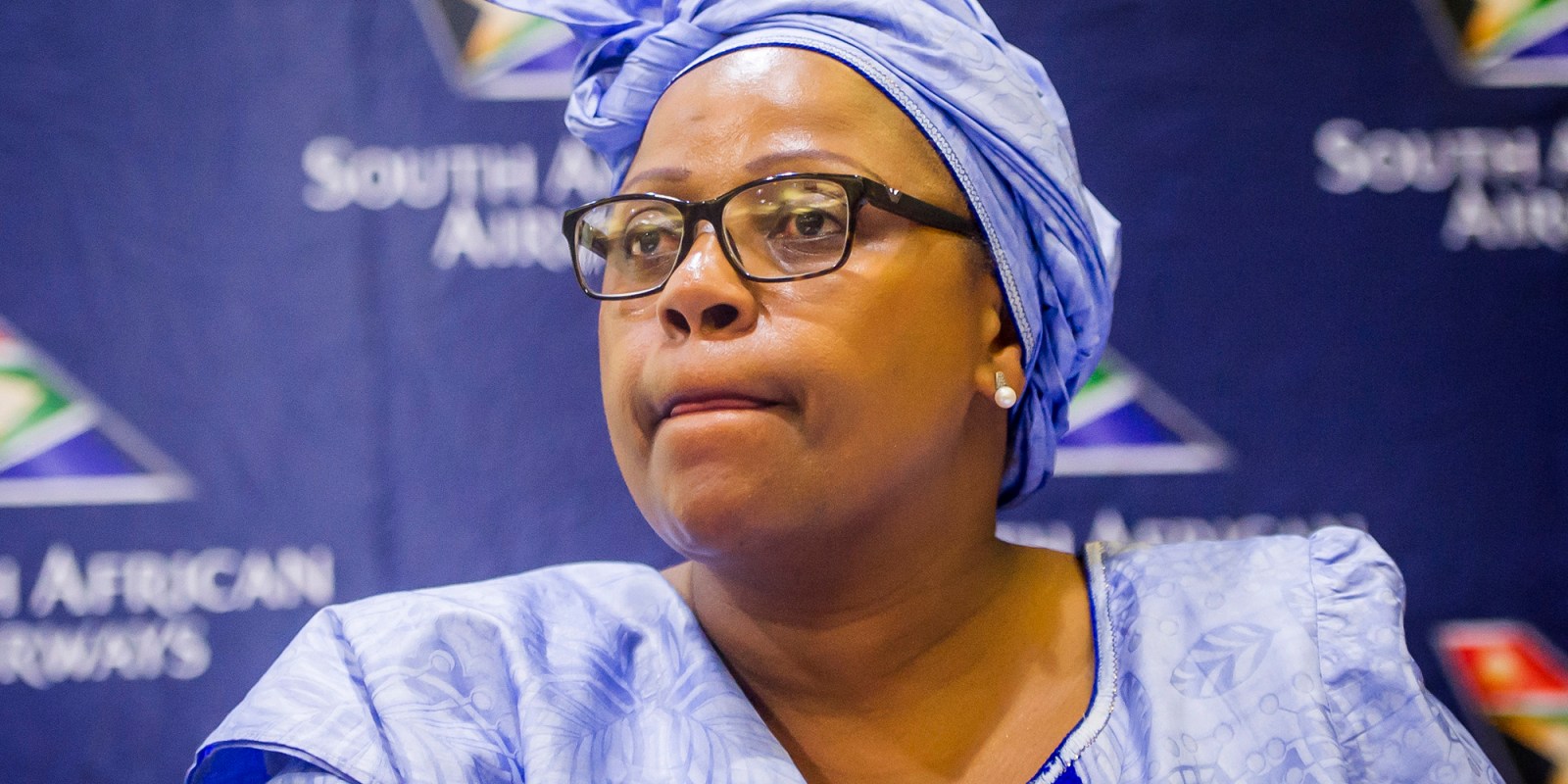 The Organisation Undoing Tax Abuse (Outa) and the South African Airways Pilots’ Association (Saapa) have argued in court papers that former SAA chairperson Dudu Myeni's appeal has no prospect of success and was a delaying tactic.

The Organisation Undoing Tax Abuse (Outa) and the South African Airways Pilots’ Association (Saapa), in heads of argument filed on 4 September, oppose former SAA chairperson Dudu Myeni’s leave to appeal an application against a judgment issued by Judge Ronel Tolmay on 27 May.

Myeni has argued that she would suffer harm if the court forced her to relinquish all her directorships, while she appealed the 27 May ruling.

However, the only financial harm Myeni allegedly faced was that she would lose income from her role as Centlec deputy chairperson, Outa and Saapa wrote.

Outa and Saapa argued that Myeni, during the trial, had tried to hide her Centlec position and the remuneration she earned from it.

Myeni claimed to be ‘unemployed’

She claimed under oath that she was “unemployed” and did not earn any income, they added.

Yet, under cross-examination, Myeni downplayed the remuneration that she received from Centlec, claiming it was “very minimal”, Outa and Saapa said.

“If this is the case, then the harm she would suffer by not receiving the stipend cannot be described as irreparable,” they added.

But Myeni now claimed under oath that her Centlec earnings were critical to her survival and this was another self-serving about-turn, Outa and Saapa state.

Myeni, they argued, said whatever was expedient, without regard to the truth.

Given Myeni’s evasion and dishonesty surrounding the Centlec payments, the court should disregard her allegations as wholly unreliable, Outa and Saapa wrote.

Myeni filed a leave to appeal application against the judgment on 18 June.

Outa and Saapa, on 23 June, filed a notice of opposition to that appeal.

Outa spokesperson Samantha van Nispen said on Thursday that Myeni had until 15 September to file her response, but she requested an extension until 22 September.

Outa gave Myeni until Friday, 18 September, to file her response, and if she failed to meet that deadline then she would have to approach Tolmay for approval for an extension, Van Nispen added.

Eric Mabuza, Myeni’s attorney, told Daily Maverick on Friday morning that he would submit heads of argument in response to Outa and Saapa filing next week.

Outa and Saapa have also argued that the court must enforce Tolmay’s order while Myeni applied for leave to appeal.

They said that Myeni’s application for leave to appeal faced “insurmountable obstacles”.

Tolmay made multiple findings against Myeni, and any one of those findings justified the declaration of delinquency, Outa and Saapa said.

“The majority of these findings are not addressed [by Myeni], including the multiple findings of dishonesty, wilful misconduct and recklessness,” they added.

“Directors have previously been declared delinquent for mere failure to prepare and finalise annual financial statements and to hold annual general meetings timeously. This court’s uncontested findings of misconduct are of an entirely different magnitude,” they added.

Outa and Saapa accused Myeni of nitpicking Tolmay’s judgment, which provided no prospects of success for her appeal.

Myeni provided no reasons that would convince a court of appeal that Tolmay’s judgment was wrong, Outa and Saapa said.

Seven grounds to justify the appeal

Myeni relied on seven grounds to justify her appeal, they said.

First, Myeni opposed the judge’s decision that Outa had standing in the public interest in terms of the Companies Act.

The court addressed the matter in its judgment of 12 December 2019, when Myeni’s appeal was dismissed, Outa and Saapa said.

Myeni brought an application for leave to appeal against that judgment, which the court dismissed on 28 January.

It was unacceptable for her to revive the issue, they said.

The evidence led during the trial put it beyond doubt that Outa and Saapa brought the case in the public interest, they added.

Second, Myeni attempted to resurrect her complaints about the failure to join the other SAA directors to the case, they said.

The court dealt with that matter in the judgment issued on 2 December 2019, Outa and Saapa said.

Myeni failed to appeal that judgment in her two applications for leave to appeal, heard in January, they said.

Third, they said that Myeni made “vague and unspecified claims” about evidence that Outa and Saapa introduced that were allegedly beyond the scope of the case.

There was nothing specific about her complaint, which rendered it “fatally defective”, Outa and Saapa said.

Fourth, Myeni’s appeal dealt with the proposed Emirates code-sharing deal, which in 2015 was worth an estimated R1.5-billion to SAA.

Tolmay found that Myeni had no grounds to block the signing of the Emirates agreement in June 2015 and her actions halted the deal.

“What motivated these reckless and detrimental actions… we still do not know,” she wrote.

Myeni breached her fiduciary duty by sabotaging the deal, and the people of South Africa and SAA’s employees were still paying the price of her actions, Tolmay added.

Instead of addressing these issues, Myeni confined herself to two points related to the Emirates deal, Outa and Saapa said.

First, Myeni alleged that the court erred in finding that former president Jacob Zuma’s instructions to her were immaterial to her delinquency.

The suggestion that Myeni’s case stood or fell on whether she could prove that Zuma instructed her to halt the Emirates agreement had no basis, Outa and Saapa said.

Second, Myeni claimed that the court “disregarded” the board minutes of 10 July 2015.

“Far from it; this court addressed the board minutes in detail,” Outa and Saapa argue.

Fifth, Myeni based her appeal on the court’s findings related to the Airbus swap transaction.

This deal was an agreement between SAA and Airbus in 2015 to cancel a contract to buy 10 Airbus A320-200s and to substitute it with a new deal for SAA to lease five Airbus A330-300 aircraft.

This deal would have allowed SAA to save money and avoid significant impairments that would have resulted from failing to accept delivery of the Airbus A320-200s.

‘She lied to Airbus and the minister of finance’

The documentary evidence established that Myeni lied to Airbus and the minister of finance – at the time, Nhlanhla Nene – and this took SAA and the country to the brink of financial ruin, Outa and Saapa states in its papers.

“Myeni claims that there was ‘no evidence’ that she attempted to renegotiate the swap transaction unilaterally,” they added.

This claim was contradicted by Myeni’s letter of 29 September 2015, to Fabrice Brégier, then president of Airbus, in which she unilaterally sought to renegotiate the swap transaction and misrepresented that she did so on behalf of SAA, they added.

Myeni opposed the imposition of lifetime delinquency, but she offered no grounds for concluding that the judge based the sanction on the wrong principles, Outa and Saapa said.

She suggested that Tolmay erred in referring the case to the National Prosecuting Authority for investigation.

Yet Myeni failed to address the judgment, which explained that her breaches were criminal offences, they added.

Myeni alleged that the judge was biased

Seventh, Myeni alleged that the judge was biased because the judgment was a “carbon copy” of the plaintiffs’ legal documents.

Given the thousands of pages of evidence, Myeni could not fault the judge for using Outa and Saapa’s summary, they said.

A reasonable person would consider the great lengths to which the judge went to accommodate Myeni despite her obstructive stance, they added.

No reasonable person with knowledge of the trial could conclude that the judge was biased, they said.

Outa and Saapa argued in their enforcement application that the court should not suspend Tolmay’s order, while Myeni appealed it.

“Myeni remains unrepentant. She persists in her denial of any misconduct or harm resulting from her actions,” they said.

A strong message had to be sent that the mismanagement of parastatals would result in consequences for those involved, and that wayward directors could not use appeals to evade accountability, Outa and Saapa said.

“Interim enforcement is necessary to prevent further irreparable harm to the investing public and the public purse,” they added.

Outa and Saapa submitted an alternative challenge that sought to declare a section of the Superior Courts Act unconstitutional that made a court order unenforceable, while a party to the matter appealed it.

If the court found that Myeni’s loss of “very minimal” Centlec earnings constituted irreparable harm that halted the order, then Outa and Saapa would bring a constitutional challenge in terms of the Superior Courts Act.

They argued that the court should dismiss Myeni’s appeal as it had no merit, and her prospects of appeal were “extraordinarily weak”.

Myeni should pay the costs of both the leave to appeal and the enforcement applications, including the fees of three counsel, Outa and Saapa added.

The court was justified in awarding punitive costs because of Myeni’s evasiveness about Centlec and her resurrection of grounds for appeal that the judge had decided upon, they added. DM