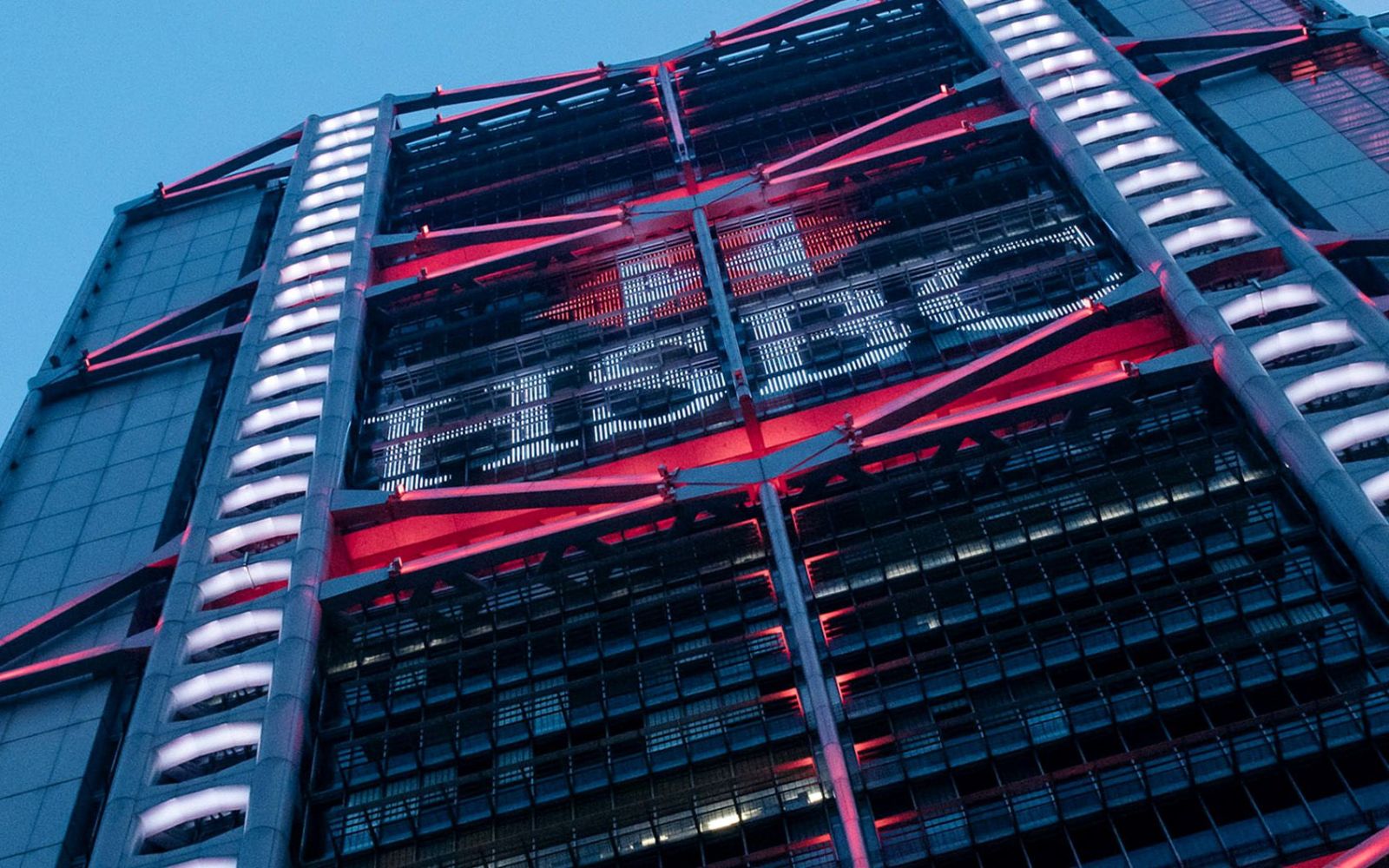 Emerging markets came up tops during the last week, with large global banks finding they offer relatively attractive opportunities compared to their developed market counterparts. But these assessments are unlikely to hold the grouping in good stead until the US elections and other hurdles are behind us – and investors can see further than a couple of months out.

If September has confirmed anything, it’s that markets can certainly turn on a dime – and, with US elections just more than a month away, we can expect many more about-turns to come.

After selling off almost 7.5% to its lowest point in late September, pulled down by a sharp correction in the big tech stocks, the S&P 500 Index rebounded 3.5% in the days leading up to month-end.

The difficulty of predicting the market’s trajectory understandably spilled over to emerging markets. For most of the month, risk-off sentiment prevailed and the unpredictable outcome of the forthcoming US elections also weighed on emerging market assets. But nervous investor sentiment didn’t stand in the way of some of the larger global banks coming out in favour of emerging market prospects relative to their developed market counterparts.

HSBC global head of Emerging Markets Research Murat Ulgen said the bank’s second EM Investor Sentiment Survey showed investors were more confident about emerging markets than they were three months ago. Nearly half of the respondents were bullish about emerging market prospects.

The majority, 71%, expect emerging market growth to improve over the next 12 months, compared with just 37% in June, based on their views that accommodative policy rates would stay the same.

Ulgen noted: “While respondents to our survey have still relatively high cash holdings now, nearly one-third now expect to put more cash to work in the near term and invest in EM financial assets. Only 11% expect to increase their cash holdings.”

The sharpest turnaround was in sentiment towards equities, with the proportion of respondents expecting EM equity markets to improve – almost doubling to 67% compared with 36% in the June survey. Some 55% expect emerging market equities to outperform developed markets for the next six months, higher than the June survey results.

Asia is seen as the region with the most favourable outlook across asset classes, while Latin America is considered to have the least optimistic outlook.

Meanwhile, Citigroup based its buy recommendation on emerging markets to the economic disappointments coming through in Europe and the “robust” status of emerging markets. It, too, recommended investors trim their developed market-specific exposure due to downside risks and take advantage of relatively attractive emerging market equity valuations.

Adding to the positivity, analysis on emerging market current account positions by the Institute of International Finance was also favourable. Based on their research, deputy chief economist Sergi Lanau and economist Jonathan Fortun expected emerging markets to build up “several sizeable surpluses” this year and said this would reduce emerging market external risk. They conclude that for emerging markets, “Covid-19 is mostly a growth crisis with fiscal implications and less of an external funding crunch”.

From a global point of view, however, there is mounting evidence that economic growth is stalling. The September 2020 Organization for Economic Cooperation and Development (OECD) Outlook confirmed that the global economic recovery had lost some momentum in recent months, while the weekly Oxford Recovery Tracker, capturing more current economic conditions in the US, was described as slowing to a “crawl”.

The OECD spelt out three possible future economic scenarios (see graph below). Its base case is for a 4.5% decline in global growth this year and a 5.5% recovery next year but this scenario “is subject to considerable uncertainty”. 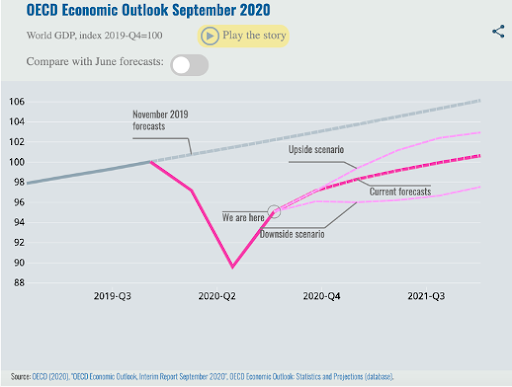 At its recent Short-Term Investor Forum, UBS’s summary of the views expressed on the global outlook was: “Don’t expect a V.” The bank said participants had agreed that “the swift phase of the recovery had already drawn to a close” and that although the world economy may have moved past the worst, it was still far from normality.

Most speakers agreed that the main concerns were the pandemic, the US elections and US-China relations. They believed that until there was a vaccine, there was “no obvious catalyst for the next upward leg for equities”.

In the last week of September, the prospect of US President Donald Trump refusing to leave the White House escalated US election concerns. During a press interview, Trump said that he could not commit to a peaceful transfer of power.

Although Senate majority leader Mitch McConnell attempted to put these concerns to rest by assuring the public that this would not be the case. However, Trump’s increasingly strident claims that there is already evidence of widespread voter fraud are an indication of what is to come if he isn’t voted back into power. HSBC believes there is a 50/50 chance of a stalemate over the result in November.

Such an outcome will keep markets on edge until almost the end of the year.

The bank looks at what happened during the disputed 2000 elections when the Supreme Court took five weeks to issue its ruling. The graph below shows that at the time the S&P 500 index fell 12% from its pre-election level to a low the week after the court issued its decision. At the same time, investors headed for the safety of US Treasuries. 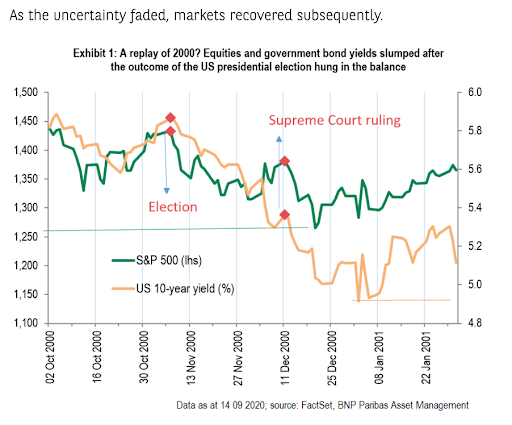 The other roadblock standing in the way of an improved economic and financial market outlook is the seemingly losing battle to get a second fiscal stimulus package approved. Goldman Sachs and Bank of America both substantially downgraded their US growth expectations for the fourth quarter to 3% last week, citing stalled stimulus negotiations as the primary reason for slashing their forecasts.

Participants in UBS’s Investor Forum also reiterated the importance of fiscal stimulus for investor sentiment. It added that a worrying scenario would be Joe Biden winning the US Presidency but the Republicans controlling one chamber of Congress. Participants said this could prevent agreement on stimulus and that, in this event, equity and credit markets “could end up rising and falling with the fiscal outlook”.

As month-end drew near, a US fiscal package of $2.2 trillion was put back on the table and stock markets rallied in short succession, indicating that the financial market twists and turns are set to stay until the US elections are behind us.

Only then will we be able to gauge whether the optimism on emerging markets is warranted on a more sustainable basis. By then, however, the world could look like a very different place. BM/DM