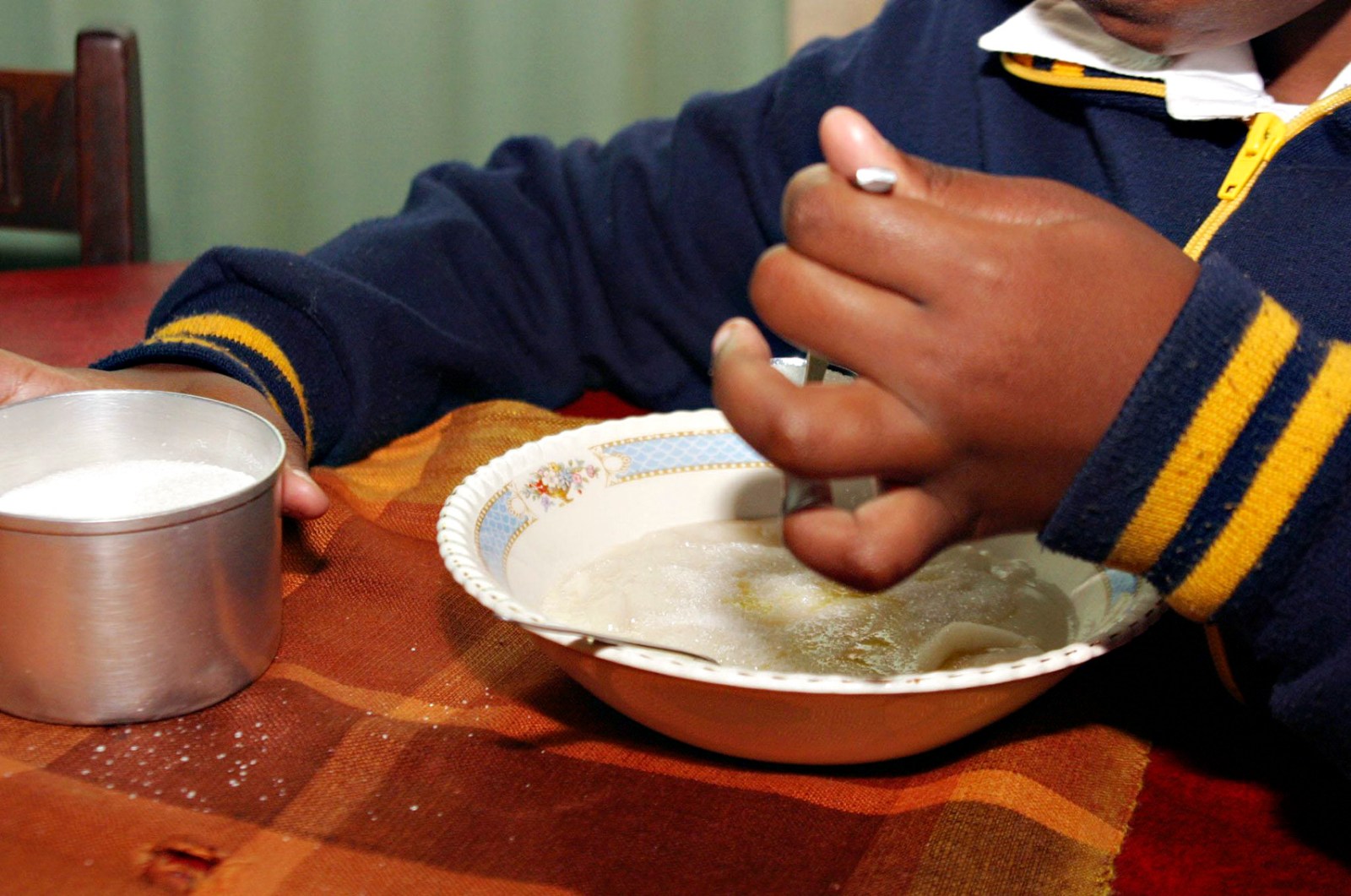 Child having breakfast before going to school. (Photo: Lucky Nxumalo)

“There have been as many plagues in the world as there have been wars, yet plagues and wars always find people equally unprepared.” – Albert Camus, 1947

Although there’s occasionally still a chill in the breeze, it’s clear now that spring is in the air. Winter is no longer coming, neither is Covid-19. For many people the sense of dread is departing, giving way to a return to normality: time for friends, family, sport, unhindered love, the prospect of summer holidays.

Yesterday the Minister of Health declared that “we are in the extremely fortunate position of achieving  effective transmission control”. So, all that remains (almost) is the inconvenience of wearing a mask and the good practices we have now learned, such as better hand washing and physical distancing.

Thankfully, life can go back to normal.

Sadly, not, because this is not an accurate description of ‘syndemic’, or of the lives, fears or aspirations of the majority of South Africans.

Tomorrow, the Daily Maverick/Maverick Citizen will publish the results of the ‘second wave’ of the National Income Dynamics Rapid Mobile Survey (clumsily known as NIDS-CRAM), which will give us the most accurate picture to date of what happened in the lives of millions of people in South Africa during the Covid-19 winter.

The details are embargoed until noon tomorrow, but what we can tell you is that the picture is a distressing one and that in key areas – education, access to food, gender equality – the survey provides evidence of a deepening of social and economic inequality.

Even more worrying, Covid-19 and the lockdown that aimed to contain it, has kicked away the ladders that are needed to make it possible for poor and historically disadvantaged people to achieve Constitutional promises of equality and social justice. Early Childhood Development (ECD) – read UNICEF’s definition here – so crucial to a child’s educational attainment, is one of the casualties.

In addition, another survey carried out by Tshikululu Social Investments, shows how many of the NGOs and CBOs that work with poor communities have been adversely affected by a Covid-19 funding drought. Sixty-six percent of the 179 organisations that responded reported that they had suffered a decline in income.

SARS-Cov-2 (Covid-19) may be a different virus to H1N1 which caused the 1918 ‘Spanish flu’, or HIV, or the bacillus Yersinia Pestis, or Tuberculosis, but it is following in their footsteps by threatening to profoundly reshape societies in its wake.

What do we mean?

In an accessible but meticulously researched little book in the Jacana Pocket History series, called Plague, Pox and Pandemics, Howard Phillips documents the history of five pandemics in South Africa. He recounts how, in 1904, the bubonic/pneumonic plague was “expediently” used as a reason to relocate Indian and African people from the inner city of Johannesburg (the so-called ‘Coolie location’, which was later razed as part of epidemic control) to much further away Klipspruit, a place proximate to a sewage farm, which later became Pimville, which later became Soweto. The same happened in other burgeoning cities like Port Elizabeth.

“The epidemic expediency provided by the plague accelerated existing social and political trends significantly in favour of single segregated state-run locations situated at a distance from city centres.” In this way “Yersinia Pestis had an impact out of all proportion to the number of lives it took.”

Sadly,120 years later, we still live with a residential apartheid in urban areas that was first consolidated by the plague.

Sadly, just as under apartheid and colonialsim, sanitation and “insalubrious living conditions” are still the primary social determinant of who bears the brunt of these epidemics, although as University of the Witwatersrand professor and political economist Patrick Bond – who frequently harangues me in private correspondence – points out: “You can search far and wide for any indication of the class and racial incidence of the disease – in this, the world’s most unequal country – and none of the researchers or journos quoted seem to give a damn.”

But in 2020, what calamity could Covid-19 introduce or entrench that isn’t already here? That is the question.

The answer is, a society in which the majority of people:

–   are permanently unemployed (watch out for the results of today’s quarterly labour force survey);

–   where any education (pre-primary, basic or tertiary) is entrenched as a privilege for a few;

–   where the majority are physically and literally peripheral and excluded; and

–   where a minority, that has once again taught itself to cauterise any empathy with fellow citizens, gets on with enjoying the fruits of the country.

An apartheid of the soul.

Back to the not-so-distant past we go… The question is, will we let this happen?

At the moment, all the signs are that we will.

In early October, key components of the Covid-19 relief package announced by President Ramaphosa on 21 April will come to an end.

Our sources tell that the government and the ANC is divided about whether to introduce a Basic Income Grant (BIG), or whether to extend the increased Caregiver Support Grant (CSG) or the Special Covid-19 relief grant which, miserly though they are, have been a lifeline to millions.

It is tragic that millions of families must now live with uncertainty and greater anxiety about where their meals will come from after October. This fact alone will be adding to the burden of mental illness which, as we will find out tomorrow, has grown exponentially.

It also seems likely that the Cabinet will meekly go along with further austerity measures when the Medium Term Budget Policy Statement is presented to Parliament on 30 October.

If they do, it will be in defiance of legally binding constitutional obligations to realise socio-economic rights, international human rights law and, most recently, recommendations made by the United Nations Conference on Trade and Development (UNCTAD) in its 2020 Trade and Development report published last week.

It is worth quoting UNCTAD at some length. They say:

Now, we all know the contempt with which tax-evader in chief, Donald Trump, holds the rule of law and the multilateral organisations of the United Nations, but does the same go for Cyril Ramaphosa?

Unfortunately though, we are worried about the quality of advice given by ministers and special advisers who have access to the president. Realpolitik tells us that Ramaphosa needs to spend a few days with no food, or on the streets with waste pickers, in order to hear a voice that is louder than the human rights naysayers.

With all of our political parties in disarray, much now depends on civil society.

In the coming weeks, protests are being organised by a number of mass organisations. The SA Federation of Trade Unions (SAFTU) is organising a strike of its members. On 16 October, to mark World Food Day, a coalition of social justice organisations is planning “empty plate” protests to highlight the hunger across our land. The Climate Justice Charter campaign is also planning a day of action on 16 October.

However, judging by the poor attendance at recent protests – for instance, those held last week to highlight the climate crisis – it seems that civil society is not getting its message across. It’s not even persuading those with the most to lose to take to the streets. There’s a danger that it has become an echo chamber for the already converted; a pin prick on power.

But while civil society needs to introspect, one should not fault activists who are at least trying to break the silence. Where are the faith leaders at this moment? How progressive is progressive business? Where are the people of good conscience, whatever their station in life?

The threat we face is an existential one.

We face not a lost decade, but a lost generation. In the words of writer Elif Shafak, we are at a “threshold moment”. In her most recent essay, How to Stay Sane in An Age of Division, she writes, “Acts of barbarity can happen fast and on a large scale… when enough people become numb. When we are indifferent, disconnected, atomised. Too busy with our own lives to care about others. Uninterested and unmoved by someone else’s pain. That is the most dangerous emotion – the lack of emotion.”

Sound familiar? Then, as citizens and rights bearers, we have a duty to do something. DM/MC