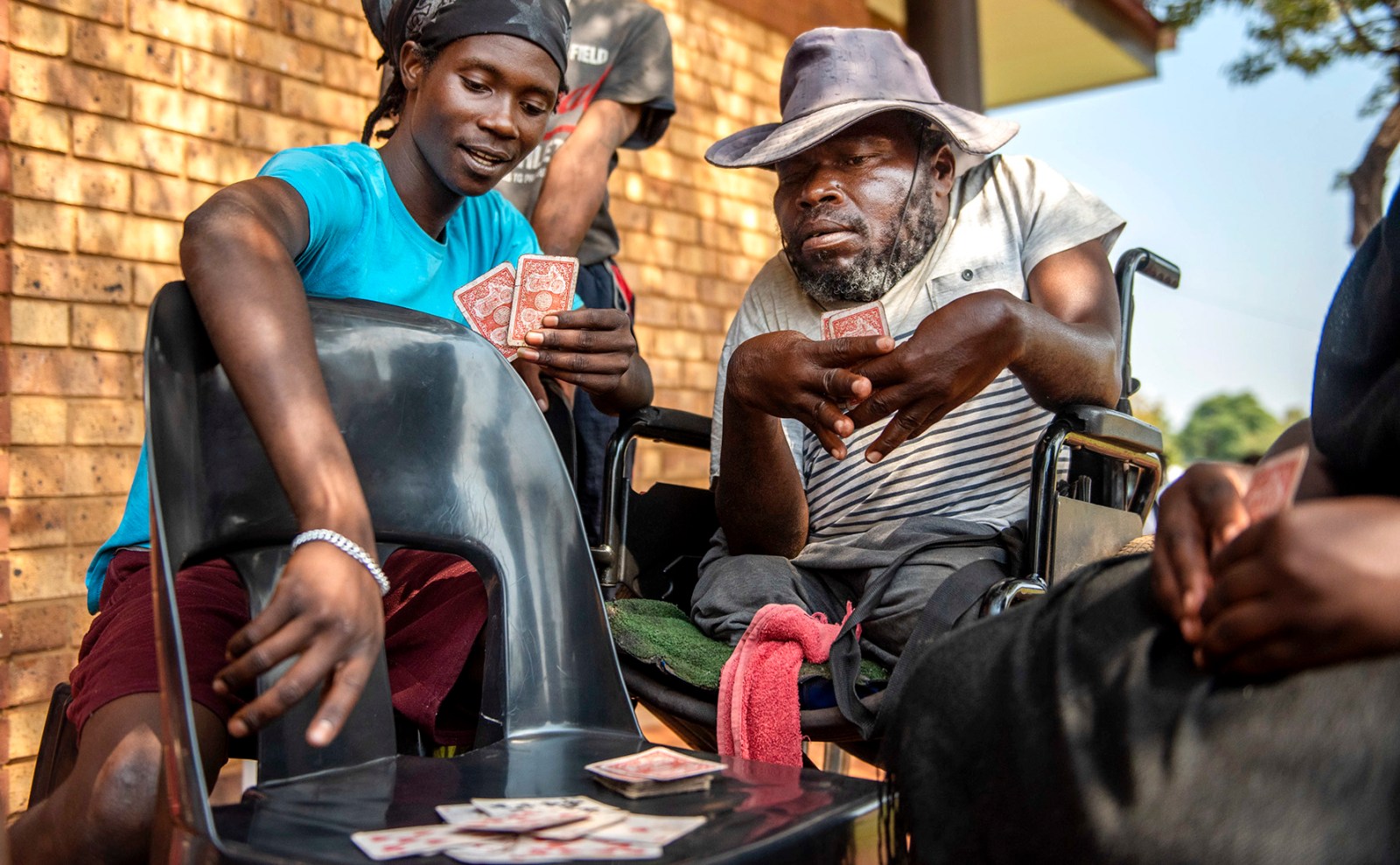 Simba Zimbanjo (in blue) with his father Maruva play cards at Heuweloord Community Shelter in Centurion. The right to social security is guaranteed in article 9 of the International Covenant on Economic, Social and Cultural Rights. (Photo by Gallo Images/Alet Pretorius)

‘Economic recovery should be financed through progressive taxation schemes and social programmes with a strong redistributive component,’ says the report. This is to ensure that crisis recovery is centred on poverty eradication as well as reducing inequality.

A report released on 11 September by the UN Special Rapporteur on extreme poverty and human rights says the economic crisis triggered by the Covid-19 pandemic is the worst since the Great Depression of 1929.

In the report, titled Looking back to look ahead: A rights-based approach to social protection in the post-COVID-19 economic recovery, the Special Rapporteur reminds us that this crisis was preceded by the global financial meltdown of 2008-2011. He says that 10 years later the world is still dealing with that crisis’s legacy on poverty, inequality and failing public services. Covid-19 will make it worse – unless the world responds differently.

The report is the first one issued by Olivier de Schutter, the newly appointed Special Rapporteur on extreme poverty and human rights (for more about this role, see here), who has taken over the mandate from Philip Alston. De Schutter continues Alston’s practice of not beating about the bush when it comes to naming the drivers of extreme poverty and notes that: “The world was ill-equipped to deal with the socioeconomic impacts of this pandemic because it never recovered from the austerity measures imposed in the aftermath of the global financial crisis of 2008-2011.”

However, while noting that government responses to social protection have been “maladapted, short term, reactive and inattentive to the realities of people in poverty”, the report says that we are now being presented with an opportunity to be better equipped for the future and “exhorts countries to design recovery plans with climate justice and equitable financing at their core”.

The report comes in the wake of the World Health Organisation (WHO) announcing its independent panel to review the world’s response to the Covid-19 pandemic, co-chaired by former Liberian president Ellen Johnson Sirleaf and former New Zealand prime minister Helen Clark. South Africa’s former director-general of health, Precious Matsoso, has also been named as part of the panel.

It was followed a few days later, on 14 September, by a report issued by the Melinda & Bill Gates Foundation that shows how far behind the UN’s Sustainable Development Goals (SDGs) the world is and documenting how the Covid-19 pandemic has wiped out 20 years of progress. The report detailed that extreme poverty had risen by 7%, which contributed alarmingly to the increase of world hunger, with 130 million more people reported as being food insecure.

In the face of this, socioeconomic rights, including to social protection, become all the more important.

One of the ways proposed to do this is to ‘normalise’ social protections as a permanent part of societal systems and governance, making them permanent entitlements prescribed by domestic legislation.

The report argues that “equitable financing” should be at the centre of any crisis response so that there is a “universality of protection, based on social solidarity”, which will ensure an equitable response that does not leave poor countries out of the proposed solutions.

One of the ways proposed to do this is to “normalise” social protections as a permanent part of societal systems and governance, making them “permanent entitlements prescribed by domestic legislation”.

“Economic recovery should be financed through progressive taxation schemes and social programmes with a strong redistributive component,” says the report. This is to ensure that crisis recovery is centred on poverty eradication as well as reducing inequality.

The report cautions against the creation of a digital divide that would see developing countries left behind in their response to Covid-19. This also comes into play with regards to educational aids, in many African countries, for example, where only a minority of children have access to Wi-Fi and computers for schooling and tutorials.

Part of what will make this a reality, the report suggests, is ensuring “adequate participation, by social partners and by people in poverty, in the design, implementation, and monitoring and evaluation of social protection schemes, to ensure that such schemes will effectively benefit people in need, and that, in the memorable phrase of Richard Titmuss, services to the poor shall not be poor services”.

Sadly, this is not happening in South Africa, where civil society is largely excluded from negotiations taking place around social security and an economic recovery plan.

Based on a survey conducted by the Special Rapporteur, to which 34 countries (but only one, Sierra Leone, from Africa) contributed, the Special Rapporteur reports that 1,400 social protection measures have been deployed in 208 countries to mitigate the Covid-19 crisis. However, while this is “impressive” and proves that “political will is all that is needed to address poverty”, De Schutter notes that these measures have proven not to be very effective and are often restricted by bureaucratic limitations and digital barriers. The social protections are also often inadequate to cover people’s basic needs and are meant more as short-term measures. Of concern is that they sometimes exclude those who are informally employed or are undocumented migrants.

According to the report, 61.2% of the world’s workers are in informal employment. It notes, however, that 21 countries, including Brazil, the Philippines and Mexico, have developed protections for informal workers, but recommends that this “sudden interest in their livelihoods must be compounded with a genuine commitment to their needs by tailoring social protection schemes to the realities of the different groups of workers within the informal economy”.

The report argues that key to the effectiveness of social protection measures is including children and adults who are unable to earn an income, particularly women, people living with disabilities, migrants and pensioners.

There need to be more gender-responsive protections in place, with women being disproportionately affected by the coronavirus – they are the majority caregivers whether at home or in employment. They were/are always the most affected by factors such as closed schools and restricted access to medical facilities.

The report cautions against the creation of a digital divide that would see developing countries left behind in their response to Covid-19. This also comes into play with regards to educational aids, in many African countries, for example, where only a minority of children have access to Wi-Fi and computers for schooling and tutorials.

Finally, throughout the report the Special Rapporteur commends the efforts of civil society, which has worked with governments in many ways to pool their expertise in order to access healthcare, education, information and work towards the social security of communities. The report shows how civil society has been critical in speeding up the process of relief fund assistance.

Nevertheless, a noted shortcoming was that governments “had failed to institutionalise the participation of people in poverty in the elaboration, application or evaluation of economic recovery plans”.

“When task forces have been formed, the voices of economists and virology and epidemiology experts have been privileged, to the detriment of those of other health and non-health experts, including people in poverty, despite the unique knowledge they can bring to the table. This impression is confirmed by WHO researchers, who have found that ‘evidence’ is largely understood as research based, and not necessarily experience based, and that non-governmental expertise, particularly of civil society and community groups, is mostly left out of decision-making.”

South Africa did not respond to the Special Rapporteur’s questionnaire, but it is clear that many of the weaknesses and principles he identifies are directly applicable to how we respond to the Covid-19 crisis. As social movements debate the inadequacies of our own economic recovery plan and continue to contest the government’s pursuit of policies of austerity, this report should be essential reading and ammunition for activists trying to remind our government of obligations it has taken on under the international human rights covenants that we have ratified. DM/MC