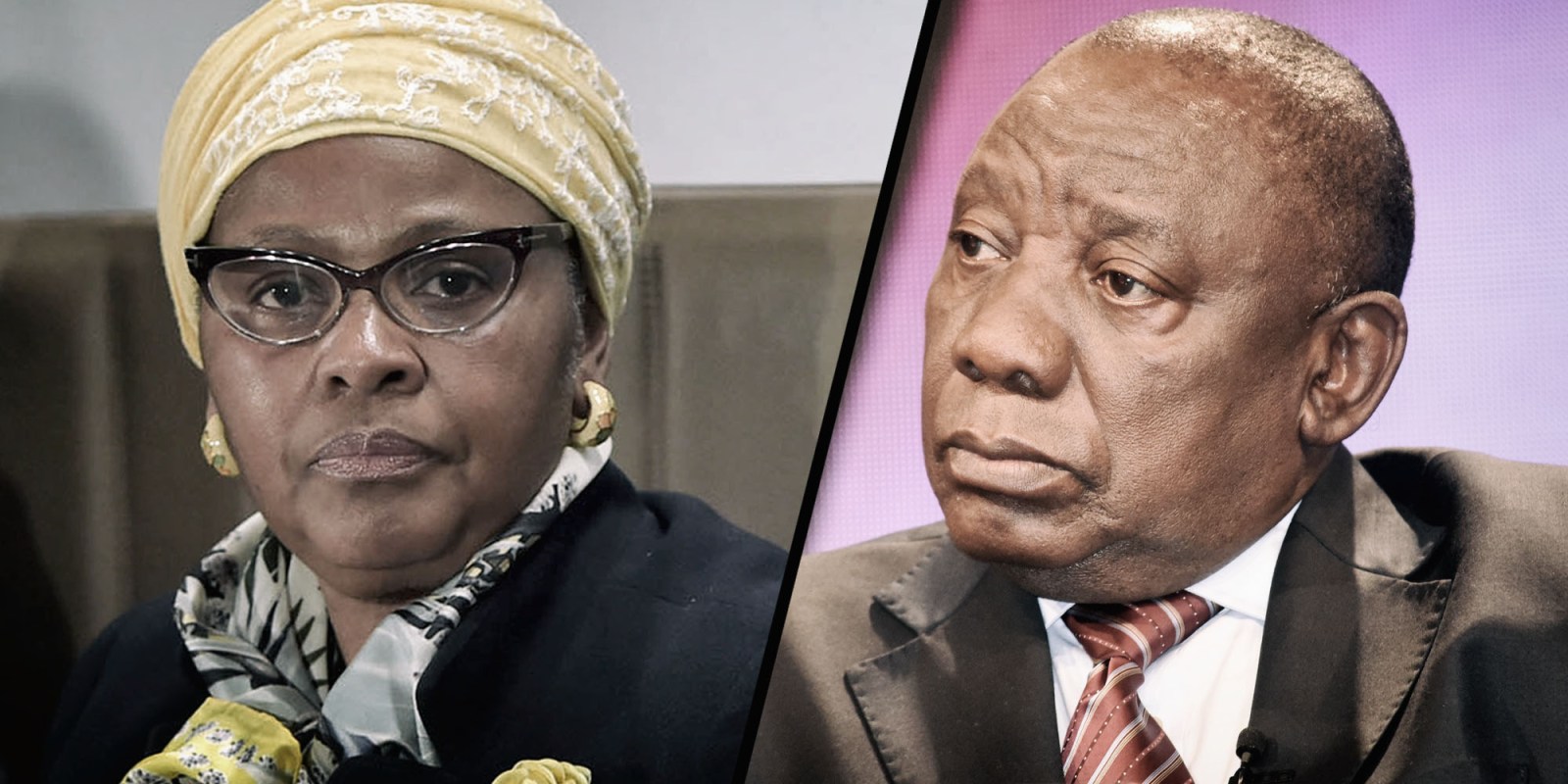 President Cyril Ramaphosa has taken action against Defence Minister Nosiviwe Mapisa-Nqakula over the incident in which an SANDF plane was used to transport an ANC delegation to Zimbabwe. This appears to underscore Ramaphosa’s stated belief that the ANC is not more important than the nation. And it is the first time the president has acted against someone of such seniority within the ANC.

On Saturday at 10.15pm the Presidency issued a statement. It’s a curious time to issue any kind of statement, as the Sunday newspapers have already started rolling off the presses and the Monday morning news cycle is many hours away. Some will no doubt feel that the timing was designed to ensure that it received as little attention as possible.

In the statement, Ramaphosa said he was issuing the Minister of Defence and Military Veterans, Nosiviwe Mapisa-Nqakula, with a “formal reprimand for conveying an African National Congress delegation to Zimbabwe on an aircraft of the South African air force”. This came after it emerged that the ANC delegation, including Secretary-General Ace Magashule and Social Development Minister Lindiwe Zulu, had been transported to Zimbabwe on a government plane for talks with Zanu-PF members. The ANC officials were there to speak to Zanu-PF only in their capacities as ANC leaders, and there was no official reason for them to be transported at government expense.

Ramaphosa has also further sanctioned Mapisa-Nqakula by forcing her to take no salary for three months, during which time her paycheque will be paid to the Solidarity Fund. He has also ordered her to ensure that the ANC goes through with its promise to reimburse the government for the cost of the flight, and to report back to him when this is done.

This is not the first time that Ramaphosa has imposed such a punishment on one of his ministers, but it is perhaps more important than the other occasion.

The only previous minister to receive such a sanction from Ramaphosa was Communications Minister Stella Ndabeni-Abrahams. While she is a minister, and also suffered a loss to her salary, she does not have the ANC seniority that Mapisa-Nqakula enjoys.

By making such a public example of Mapisa-Nqakula, Ramaphosa may well be sending a signal that no one in his Cabinet is above the law and the letter of the regulations of the Executive Ethics Code.

Also, in the case of Ndabeni-Abrahams he had an important argument he could make to her supporters. She was punished for breaking lockdown regulations, just as they were being imposed for the first time. Then Ramaphosa could argue he had to act, because the legitimacy of the entire lockdown was at stake. If he had not done so, millions of people could have ignored the regulations, potentially exposing themselves to the coronavirus. There was no similar excuse that could be made over Mapisa-Nqakula’s actions, and the outrage from many parts of society was at a deafening level.

It is also interesting to note that Mapisa-Nqakula is losing three months’ worth of her salary, while Ndabeni-Abrahams lost just one. But Ndabeni-Abrahams was forced to take special leave, to make a public apology and to effectively cease being in Cabinet for a full month while Presidency Minister Jackson Mthembu acted in her stead. This has not happened to Mapisa-Nqakula, who remains in office and does not have to make such an apology.

Perhaps Ramaphosa felt that that humiliation was a step too far, or that Mapisa-Nqakula should not be put through the pain of making the same kind of apology that Ndabeni-Abrahams was forced to do.

It is important to also note how the political atmosphere has changed since the era of former president Jacob Zuma. Then, Mapisa-Nqakula was able to use an air force plane to smuggle a young woman into South Africa and suffer no consequence.

During the Nkandla scandal, Zuma was ordered by the then Public Protector, Thuli Madonsela, to rebuke three ministers for their conduct. He simply sent them letters telling them he was “required to rebuke” them.

However, there is another element to his decisions that may be important.

Within the ANC over the last few years there has been a debate around whether the party is more important than the country, whether “the ANC comes first” or “the country comes first”.

This appears to have been started by Zuma, when he told the KwaZulu-Natal ANC in 2015, “that I think my organisation, the ANC, comes first”.

This was just before the (in)famous meeting of the ANC’s National Executive Committee (NEC) that decided that those implicated in corruption must “step aside”. It may be that Ramaphosa used that session of parliamentary questions to make that point so as to build up a head of steam – a political momentum – going into the NEC meeting.

Ramaphosa’s potential game changer? Only if there’s a strong follow-up

By taking action against a minister who used a government plane to give a lift to an ANC delegation (which included its secretary-general, no less) he is making an important point that the country does come first. This may well shore up his national approval ratings, which could be important in any battles to come.

As always, the question now is: “What next?”

It appears that, for the moment, Mapisa-Nqakula has no option but to take the punishment, as humiliating as it is, on the chin.

Certainly, it will bring the end of this scandal closer and the only step needed to formally end it now is for the ANC to repay the money.

However, it is well known that the party is in dire financial straits. Earlier this month it emerged it had not been able to pay staff salaries for August. This has happened several times in the past and no doubt leads to huge anger among workers at Luthuli House.

At the same time, it is getting harder for parties to get funding, as new regulations are due to come into force to prevent the funding of political parties by secret donors.

Thus, the party’s financial problems are only going to get worse. Should it result in the perception that the ANC has to put this debt above paying salaries, workers might well respond angrily. And more protests outside Luthuli House could be the result. Or worse, some internal administrative functions could be stopped, or even sabotaged by people furious at not being paid.

This, in turn, could be used against Ramaphosa if those in the party who oppose him believe that he is in some way responsible for this.

By taking action against a member of his Cabinet in this way, Ramaphosa is making an important and fundamental point about our state and the ANC, and the behaviour of people he appointed to their positions. He may well hope that the precedent he is setting here will last longer than his “line in the sand”. DM