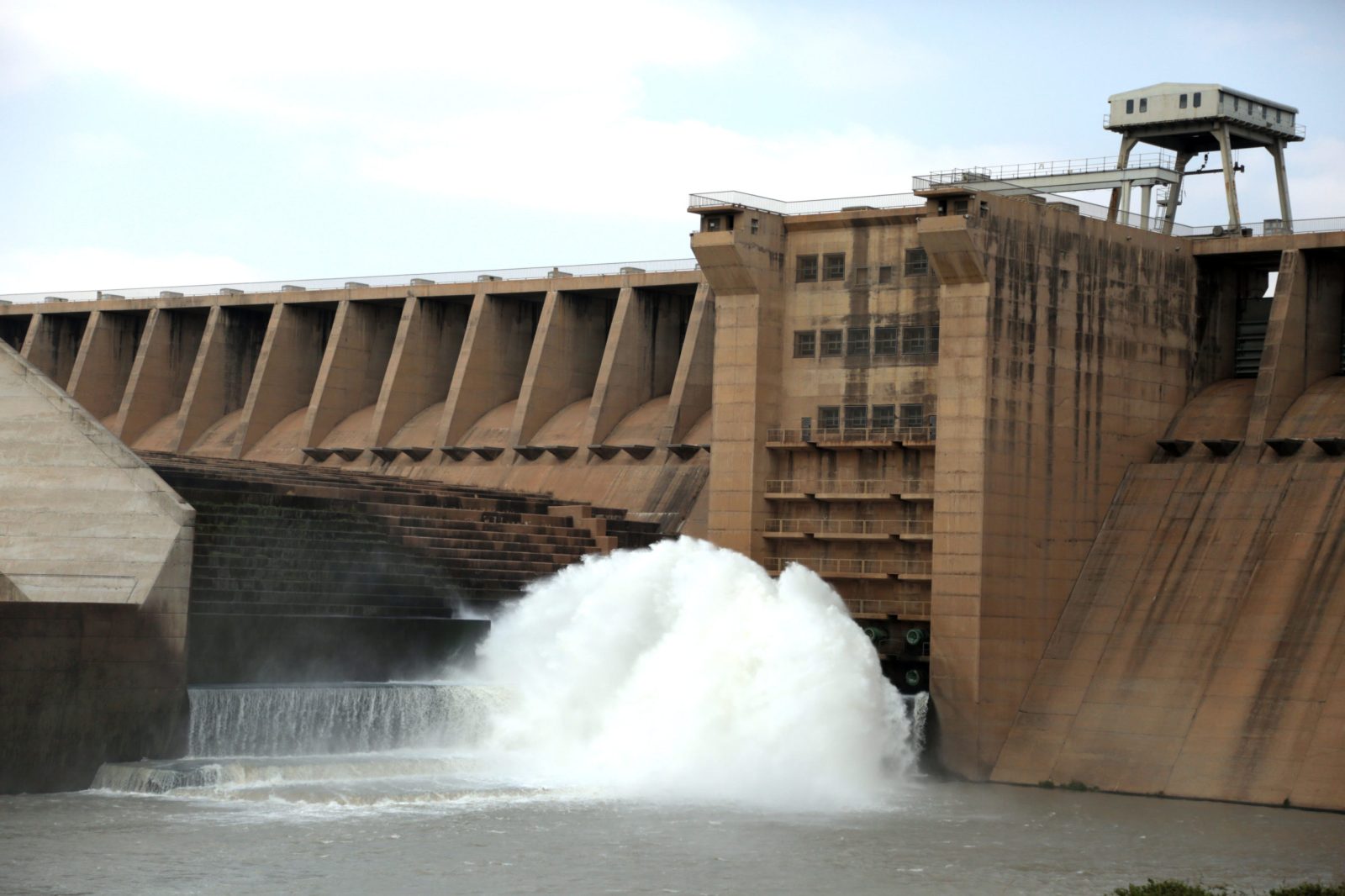 Levels of the Vaal Dam have dropped to 36%. Photo:Felix Dlangamandla/Daily Maverick

The Vaal Dam, Gauteng’s main water supply, dropped to 36% full in the second week of September.

By 17 September 2020, the Vaal Dam had dropped to a startling 36% compared with 57.6% last year during the same period. The dam hit a record 30% low in 2016 during the drought that crippled SA’s farming industry and affected the water supply for communities.

The dam serves as a key economic accelerator, supplying water to about 46% of the country’s economy — and 33% of the population — and forms part of the Integrated Vaal River System (IVRS). It supplies Gauteng and most of its Eskom power stations, and covers important economic hubs in Mpumalanga, Free State and Northern Cape.

During a visit organised by the Department of Water and Sanitation (DWS) to the dam on Tuesday 22 September, Daily Maverick observed the low level of the dam and dry riverbeds.

While rainfall is regarded as a critical driver of dam levels, as previously explained by Christine Colvin, a senior freshwater programme manager at the WWF, the state of a dam is also dependent on other factors.

Simply put, the state of catchments upstream of the dams, the water source areas, impact on the quality and quantity of water flowing into the dam. 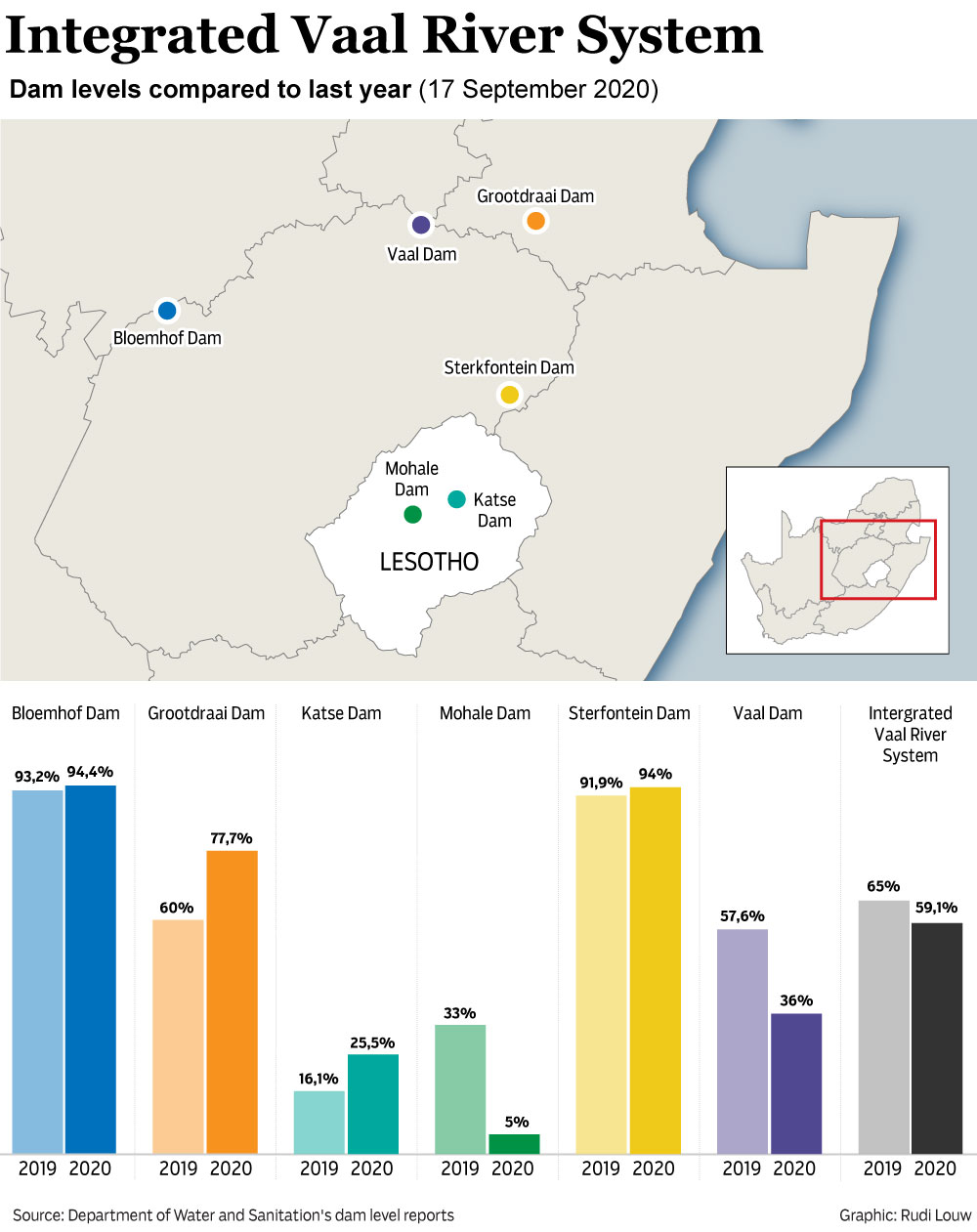 In the case of the Vaal Dam, the Vaal River has been under pressure after the contamination of its system as a result of collapsed wastewater treatment plants and pollutants from nearby industries.

“The major challenge that the Integrated Vaal River System faces, in particular, the upstream part of which is the Vaal Dam, is pollution,” said Simon Maphangula, the director of water services support at DWS.

Despite the 14-month takeover by the South African National Defence Force (SANDF) to restore the system, challenges with sewage and water quality remain largely unchanged. The army was deployed to fix the Vaal River system in October 2018 on an emergency basis. Initially, they were to spend a year fixing 46 water pump stations. However, three months into the project, funding became a problem and this stalled the work.

“When the minister of finance [Tito Mboweni] announced to deploy the SANDF to the river, it did not come with a budget. It took longer for us as a department to secure appropriate funding that was supposed to be utilised by the SANDF, and that affected the quality of work that they should have done,” Maphangula said.

When Daily Maverick reported on the SANDF’s departure in January 2020, seven pump stations had been fully restored and were operational while 24 were functioning, but required attention. With the SANDF’s departure came the Ekurhuleni Water Care Company, which took on the work begun by the army.

Ekurhuleni Water Care Company was appointed from June 2019 with the task of fully restoring the water network and ensuring functional waste waterworks and pumping, with a budget of R114-million, but ended up going over budget by R36-million. Yet the problems with waste waterworks in the Emfuleni region remain.

“However, when they hit the ground we realised that it is not an easy task. You don’t just start by trying to address a pump station, rather you need to start with operation and maintenance,” he said.

Despite having overspent on the initial budget, Maphangula said the department was not satisfied with the pace at which the water care company moved, and this informed their decision not to renew the contract.

Maphangula said the department had managed to source R911-million in funding from the National Treasury for the next two years, for the latest edition of Operation Fix the Vaal River System.

The work will be done internally and spearheaded by the department, with the help of a newly established programme portfolio office to build the required expertise and personnel to address the problems.

Mike Muller, a part-time adviser to the water and sanitation minister and the chairperson of the Water Institute of Southern Africa’s technical committee, warned in an opinion article in BusinessLive that delays in implementing phase 2 of the Lesotho Highlands water project “makes it more likely that we will repeat Cape Town’s painful self-inflicted drought disaster”.

While this might be an impending reality, rainfall remains a critical component of the system. The South African Weather Service’s seasonal climate watch predicts rainfall from late spring in September and early summer in October, “with increased chances of above-normal rainfall for most of the country”.

The average annual rainfall in South Africa is estimated to be 464mm a year, lower than the global average of 860mm. Most parts of the country receive summer rainfall. Only the Western Cape receives most of its rain in winter.

However, Celiwe Ntuli, a scientific manager at the DWS, said, for now, there is no cause for panic.

“In May we had determined that the level at which water restrictions for the users of the Vaal River system should be imposed when the system reaches 60%.”

“But the system can drop below 60% just ordinarily, like it has now. It doesn’t mean that because it is now below 60% we need to impose restrictions,” she said

Ntuli said while restrictions may not be necessary now, “we need to be cautious in using our water and use it efficiently”.

If the need arises, she said, water will be released from Sterkfontein Dam (now at 94% full), which serves as a reserve for the Vaal Dam.