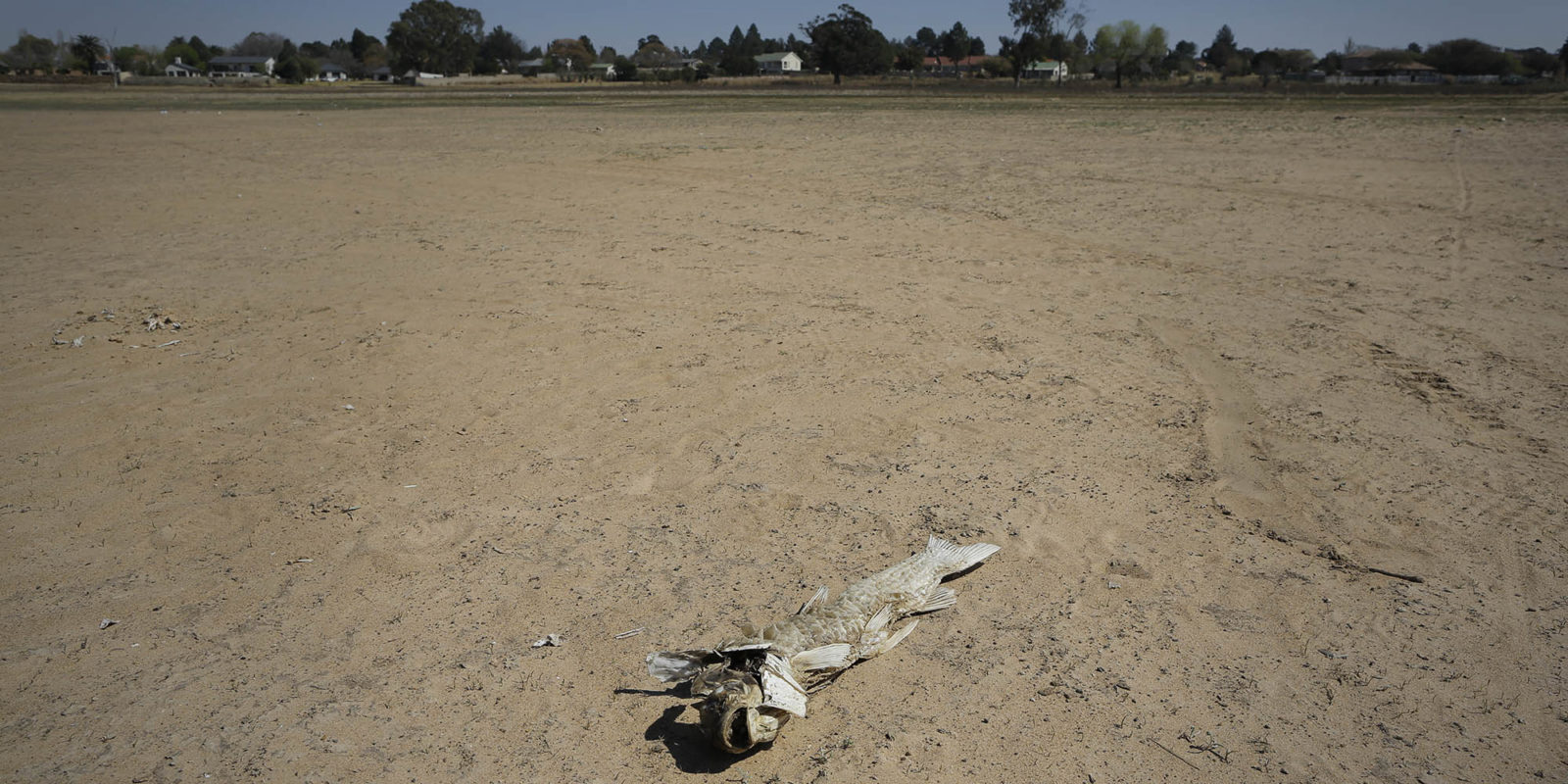 A dead and dried out fish is seen on the banks of the empty Vaal Dam due to the lack of rains, 30 August 2016. (PHOTO: EPA/KIM LUDBROOK)

Gauteng residents’ main water source is under threat from consistent dam level declines, the closure of the Lesotho Highlands Water Project — which will see the dam not receiving water until the end of November 2019 — and the collapsed Vaal river system. The link between the health of our rivers, dam levels and rainfall patterns is crystal clear.

The Vaal Dam — one of South Africa’s largest dams and a critical water supplier for major economic activities — declined to 58% during the month of September, a startling difference compared with 81.4% from the previous year around the same period. Real-time data shows the levels are continuing on a downward trajectory — with levels plunging to around 52.2% since the beginning of this month.

The dam supplies water to about 46% of the country’s economy and 33% of the population and forms part of the Integrated Vaal River System (IVRS). Not only does it supply water to Gauteng and most of its Eskom power stations, but it additionally covers important economic hubs in Mpumalanga, Free State and Northern Cape.

Yet, the Department of Human Settlements, Water and Sanitation maintains levels have not reached a critical condition, despite recording week-on-week declines.

Sputnik Ratau, the spokesperson for the water and sanitation department, told Daily Maverick:

“This is the beginning of the expected rainy season and the dam levels are not at a critical level yet.

“In terms of a major decline, this refers mainly to the comparison year-on-year, while week-on-week it is around one percentage point or so,” he said. The dam is the fourth-largest in the country by volume and comes in second by surface area. At full capacity, it carries two million megalitres of water with the exterior surface spanning more than 322km. A 52% mark means the dam roughly has 1,344,150l of water available for Gauteng residents who on average consume 305I of water a day per person, which is not inclusive of water consumed by industries.

Despite the looming rainy season for Gauteng and other parts of the country, the Vaal River has been under pressure after the contamination of its system as a result of collapsed wastewater treatment plants and pollutants from nearby industries. Added to the barrel of pressures is the two-month closure of the Lesotho Highlands Water Project which feeds water into the system.

It’s almost been 11 months since the South African National Defence Force (SANDF) was deployed to the Vaal region help rehabilitate the river. Various state bodies and government leaders have made commitments (both monetary and non-monetary) to rebuild the system, money has been channelled to “operation Vaal River”, yet non-profit organisation Save the Vaal Environment (SAVE) has raised concerns over the project and whether it is receiving enough financial support.

“The key to sewage pollution prevention is sufficient national government funding and the use of professional and skilled human resources to maintain and develop infrastructure with new technologies,” said SAVE’s vice-chairperson Maureen Stewart.

To date, almost R300-million has been spent on the operation, a small fraction of the R1.1-billion that is required to complete the rehabilitation of the entire river system.

During a visit to the Sebokeng wastewater treatment plant, the main treatment plant in the region, Deputy President David Mabuza expressed his “disappointment” over the project’s slow pace. Mabuza pledged an additional R1.1-billion for the operation, but despite this Stewart says no action has since been taken.

A recent report by the water and sanitation department found that only 16% of our rivers are in a sustainable condition, with the Vaal River’s water management area recording not a single site in good condition. The entire Vaal River system and the dam is in a dire state.

Christine Colvin, a senior freshwater programme manager at the World Wildlife Fund, told Daily Maverick that even though rainfall is critical for the health of dams, the conditions of upstream catchment areas can also have an influence.

“If alien plants, poorly managed forestry or higher levels of agricultural abstraction are happening in the water source areas, it can also result in lower run-off into the dams,” she added.

This means if there is an excessive abstraction of rivers and use up-stream, when the water eventually reaches the dams its volume and quality decreases.

However, the declining dam levels are not only exclusive to Gauteng. In some provinces the situation is so dire that water has run out, leaving boreholes and dams dry. 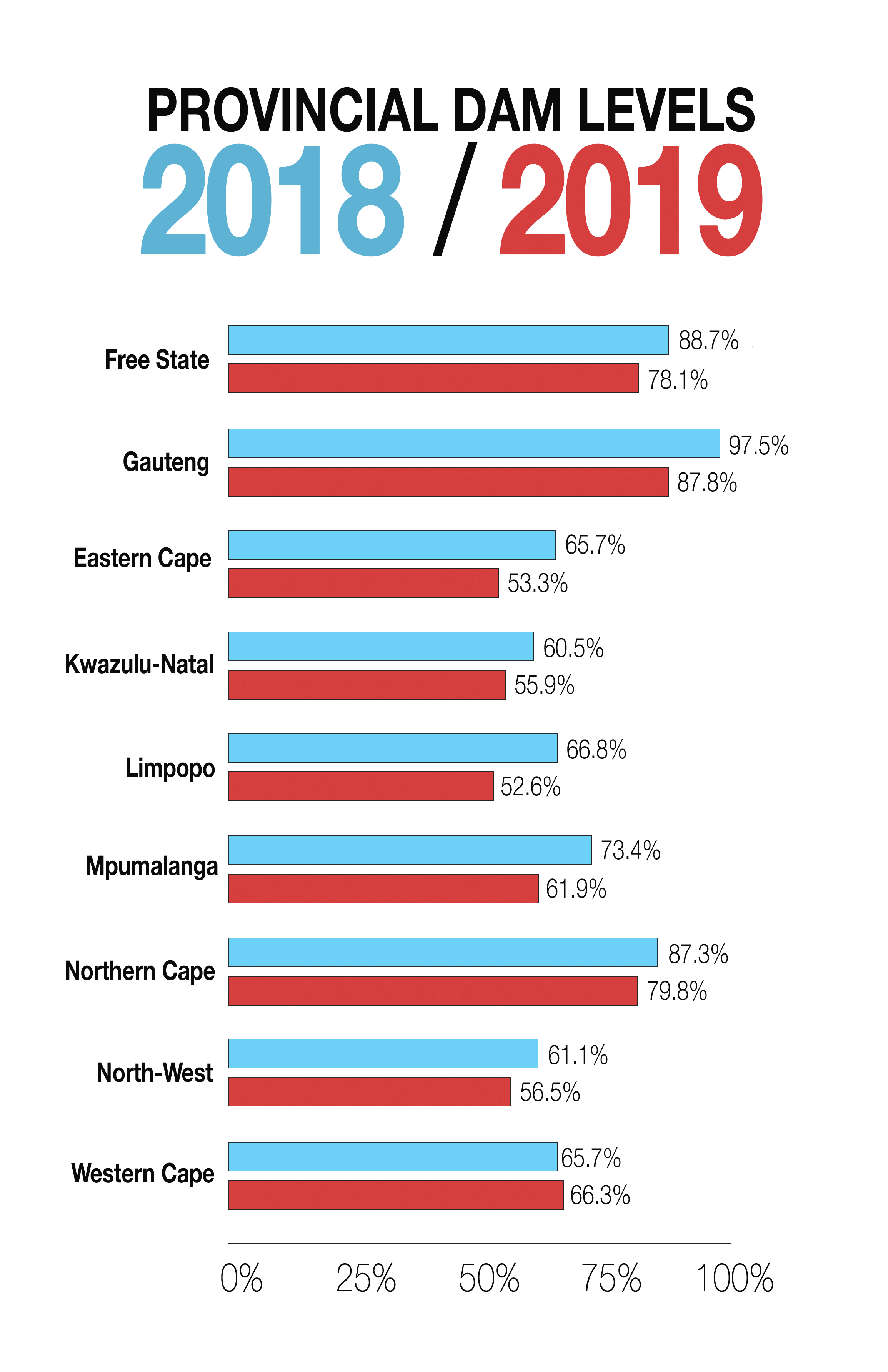 Average dam levels in the already drought-stricken Eastern Cape have dropped to around 53.3%, with the department warning that those supplying Buffalo City Metro “are decreasing dramatically”. Gcuwa dam supplying Butterworth declined from 74.5% to 41.9% during the period 11-18 September. During the same period, Rooikrantz and Kubusi dams declined from 45.6% to 42.7% and 50.7% to 49.6% respectively.

In Chris Hani District Municipality, Waterdown dam — the only water supplier for this area and Whittlesea — levels have dipped to a critical 28.6% compared to 87.9% around the same time in 2018, TimesLive reports.

Mpumalanga is also experiencing critical water shortages with Rhenosterkop dam hovering around 1.3%. When dam levels reach between the 4%-8% mark, their water becomes unusable because of sludge. In July, the water and sanitation department allocated R18-million to JS Moroka Municipality for groundwater development, following drought in some parts of the region.

Though average dam levels remain “steady” at 61.9% compared with 73.5% the previous year around the same time, there are dams still below the 50% mark.

“Rainfall is the critical driver of the dam levels, the single most important control,” Colvin says. “However, the state of the catchments upstream of the dams — the water source areas — also influences the quantity and quality of water that flows into the major dams.”

The average annual rainfall in South Africa is estimated to be about 464mm a year, lower than the global average of 860mm. Most parts of the country receive summer rainfalls with only the Western Cape receiving most of its rain in winter.

According to Johan Malherbe, a climate scientist for the Council for Scientific and Industrial Research, declining dam levels can be attributed to a number of factors and not necessarily climate change alone.

“Temperatures have been trending upwards, and we know there’s a lot of irrigation happening because if it gets hotter, we get more evaporation and the farmers need to irrigate more, you’ll see that there will be more pressure on the water that’s available during warmer periods,” he said.

Malherbe adds that significant rainfall has not been recorded since 2016/17.

While Gauteng seems not to be hard hit by the declining dam levels yet, Johannesburg water has implemented level one water restrictions for the closure of the Lesotho Highlands Water Project — which restricts residents from watering their plants and using a hosepipe to clean paved areas and driveways.

Ratau said with delayed rains and high temperatures, water conservation and demand management is important, both for domestic and industrial consumers.