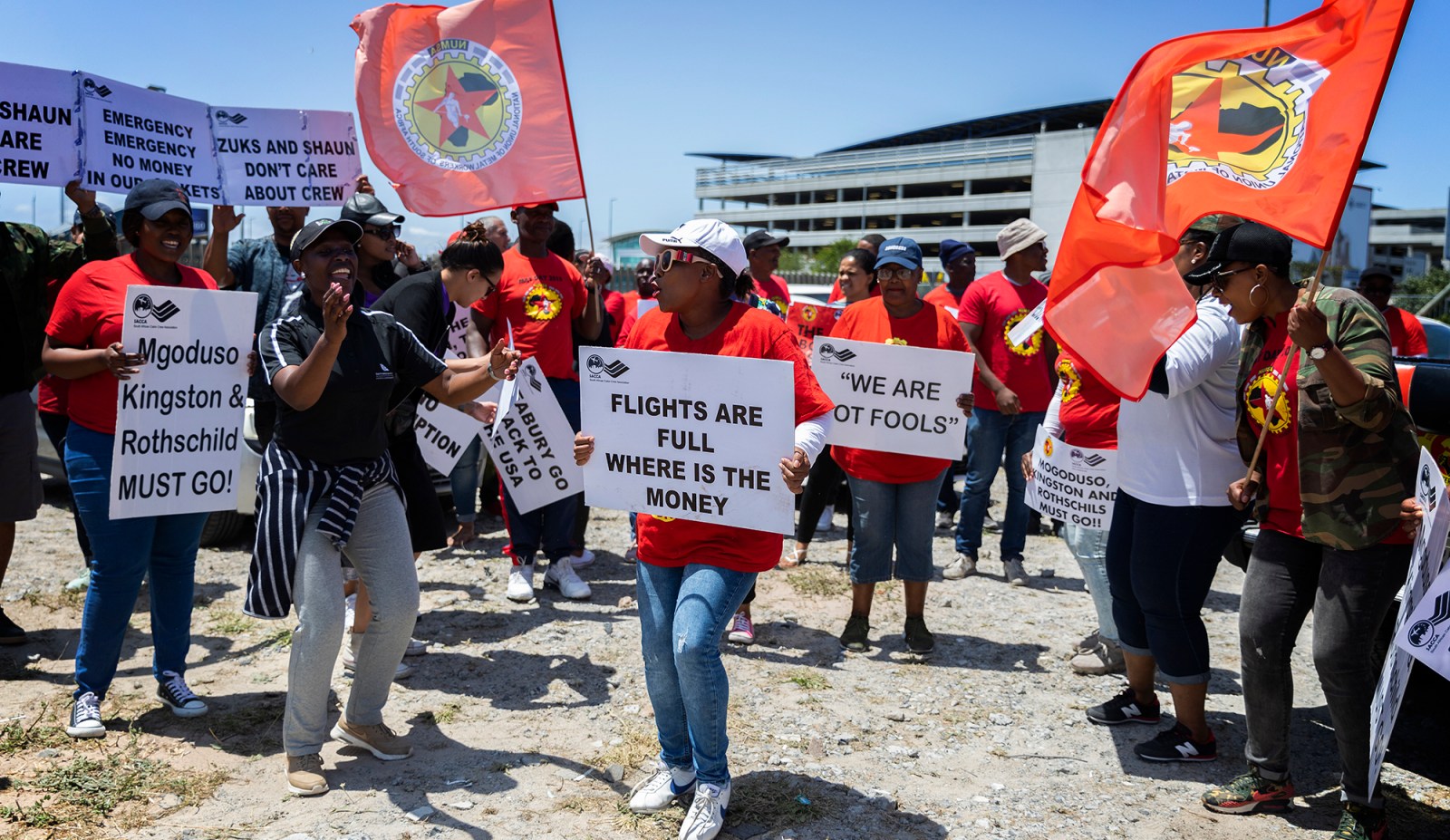 Striking SAA workers protest at an entrance to Cape Town International Airport. The labour unions at the airlines were divided when it came to the severance packages. (Photo: EPA-EFE/NIC BOTHMA)

The final proposal from the airline’s business rescue practitioners proposes cutting 3,700 jobs at SAA. Many of the airline’s employees have been getting UIF payments but their future is shrouded in uncertainty.

While SAA business rescue practitioners try to restructure the airline, staff members are contending with the loss of jobs and mounting debt.

The airline’s business rescue practitioners, Siviwe Dongwana and Les Matuson, published a final rescue plan that proposed restructuring the airline by January 2021 and cutting 3,700 jobs to save costs.

This would entail 1,000 workers at the airline remaining employed once the airline has been restructured.

Adam*, who worked as a flight attendant at SAA for 40 years, has opted to take the voluntary severance package, but “feels that [SAA] could have treated us better”.

Adam, who’s in his 60s, was referring to the huge pay cut he had to take because of the prohibition on domestic and international flights during lockdown. Like many of his colleagues, he had to get money from the UIF Covid-19 Ters fund.

“I’m in my 60s so at least I have a decent pension. My heart goes out to my younger colleagues,” he said.

The cut in pay has severely affected Jason’s* finances and he had to sell his car to pay off the rising debt.

“The debt is piling up. The banks are calling me. I’ve had to also make arrangements regarding the bond,” Jason told Daily Maverick.

Jason, who’s been at SAA for 23 years as an onboard leader, said that in addition he had to reduce costs by cutting out meat and family outings.

Jason’s mental health has also been affected by the drastic cut in his income.

“I’m depressed. I’m miserable. We have a counselling helpline [at SAA]. I’m using that because I’m having suicidal thoughts. It’s helped but it doesn’t take away the pain.”

Mohau*, who’s been a flight attendant for 23 years, said she had to cut out gym memberships and shopping. Mohau said that she applied for the voluntary severance package – “It wasn’t a decision I took lightly.”

The labour unions at the airlines were divided when it came to the severance packages. The rescue practitioners want to set aside R2.2-billion to fund severance packages, which include one week’s pay for every year worked at SAA, one month’s notice pay, compensation for accumulated leave, and a 13th cheque.

The four trade unions at SAA that are ready to sign severance packages on behalf of their members are the National Transport Movement, the South African Transport and Allied Workers Union, the Aviation Union of Southern Africa and Solidarity.

But unions including the National Union of Metalworkers of South Africa (Numsa), the SA Cabin Crew Association (Sacca), and the SAA Pilots’ Association, which collectively represent a higher workforce, have rejected severance packages. The severance package is an agreement between the employer and the employee.

On Friday 17 September, the government missed its deadline to raise R10-million to implement the airline’s business rescue plan. This led to Numsa and Sacca picketing outside the SAA offices in Kempton Park on that day.

SAA employees said they were frustrated because there was a lack of communication between them and the employee. “The unions have been keeping us in the loop; they update us regarding what is happening with the airline,” said one.

The employees that Daily Maverick spoke to said that it was unfair that SAA staff were blamed for how badly managed the state-owned entity was.

“It’s sad that South Africans blame the crew for what’s happening at SAA. They think that we squandered taxpayers’ money,” said Adam.

*Real names have been withheld to protect their identities.