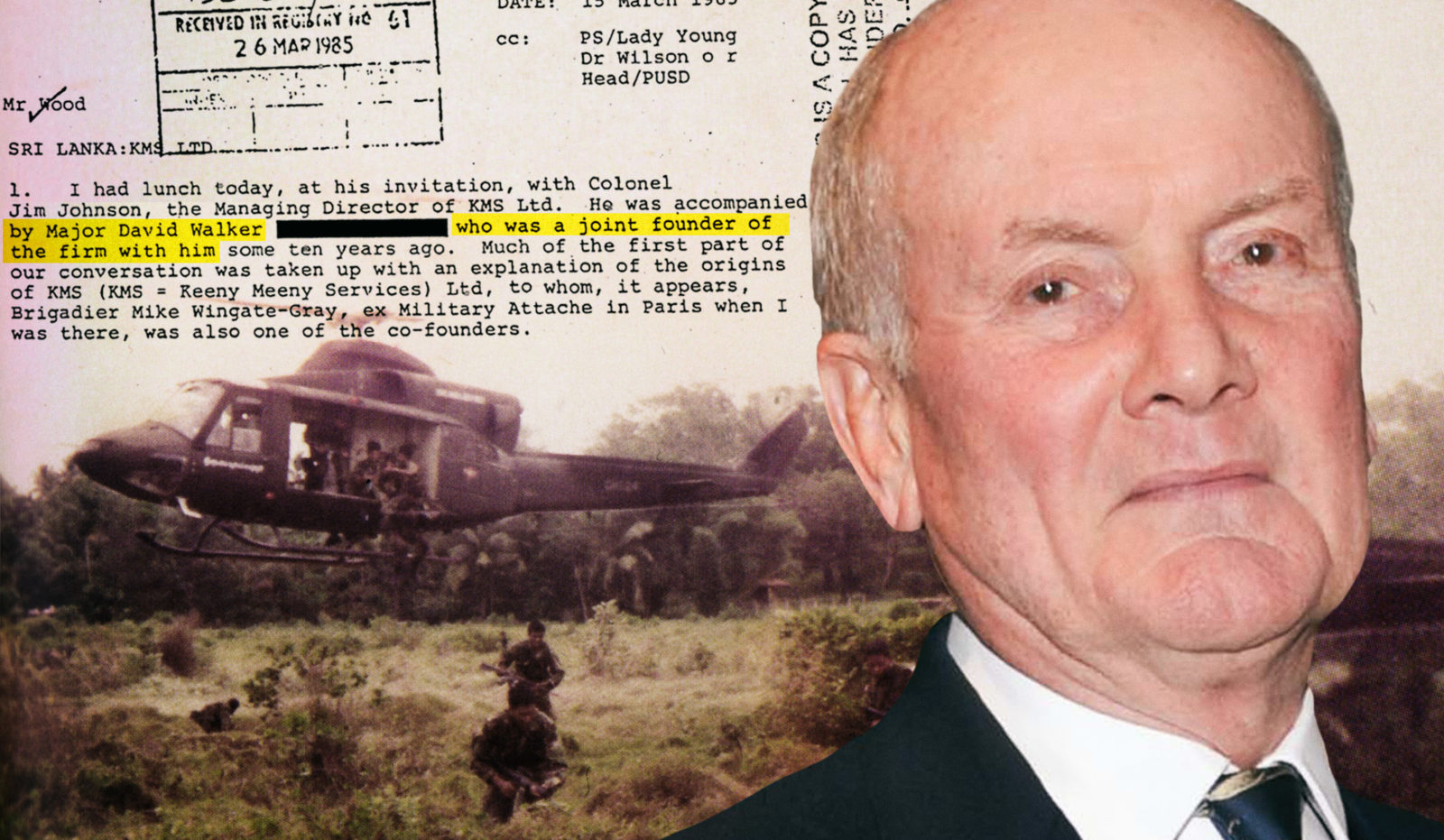 One of Britain’s oldest private security companies has admitted to UN experts that it shared an office building in west London with a group of mercenaries being investigated for alleged war crimes – but denies involvement.

Saladin Security, which has contracts across Africa and Asia, has told a United Nations watchdog that it operated from the same building as the mercenary outfit Keenie Meenie Services (KMS) from 1983 until the latter was dissolved in 1988.

The revelation comes amid a Metropolitan Police war crimes probe into atrocities by KMS in Sri Lanka during the 1980s.

KMS pilots are alleged to have killed civilians from Sri Lanka’s Tamil minority while flying helicopter gunships under a contract overseen by KMS co-founder Major David Walker, a former officer in the British army’s special forces, the Special Air Service (SAS). Walker is also alleged to be implicated in terrorism in Nicaragua in the 1980s.

At the same time as working for KMS, Walker was a director of Saladin, a position which he continues to hold according to records filed at Companies House.

The apparent connections between the two organisations caused human rights activists at the Tamil Information Centre in London to raise the matter with the UN’s Working Group on Mercenaries.

Saladin has longstanding links to the UK government. Former Conservative defence minister Archie Hamilton, who served from 1986-93 under prime ministers Margaret Thatcher and John Major, became a director of Saladin a few months after leaving the government.

The company is known to have employed former SAS soldiers and has provided security services to the British Foreign Office. Saladin and KMS have in the past shared many of the same senior staff.

In June this year, the UN experts wrote publicly to Walker and Saladin, expressing concern about the apparent “close links between KMS and Saladin Security, including at the highest managerial level”.

Walker then “provided his observations on the allegations of human rights abuses in Sri Lanka on a confidential basis” to the UN, which has not published his reply.

Earlier this month, Saladin sent a public response to the UN’s High Commissioner for Human Rights, claiming it only shared a building with KMS “for convenience” and that “corporate functions like administration and accounting were separate”. It is not clear who wrote Saladin’s response, which is unsigned.

In addition to the shared building, the UN’s Working Group on Mercenaries was concerned that Saladin’s website used to display an “About Us” page which stated that “Saladin, with its predecessor KMS Ltd, has provided security services since 1975”.

The claim that KMS was the predecessor firm to Saladin was displayed on the latter’s website for seven years from 2011 until 2018.

Saladin told the UN experts that this statement “was a marketing stratagem and is inaccurate”, claiming it was “explained by a measure of poetic licence on our part”.

However, Declassified has seen evidence that Walker also asserted the same predecessor claim in 2017 when he wrote to the head of Sri Lanka’s police Special Task Force (STF).

In his letter, Walker said: “It continues to be a matter of great pride that I frequently heard STF described as the most effective force in the country. [At that time we operated as KMS Ltd – Saladin Security is its successor company].”

KMS trained the STF from scratch during the 1980s, and the unit became increasingly involved in disappearances and massacres of Tamil civilians the longer the training went on.

A CIA assessment on Sri Lanka from 1986 stated that while “the STF’s superior combat performance relative to the army is due to its KMS training… a common STF tactic when fired upon while on patrol is to enter the nearest village and burn it to the ground”.

Saladin told the UN that it rejected any “implication that KMS was responsible for such violations [in Sri Lanka] or that Saladin has somehow inherited blame for them”.

Although Saladin is now trying to distance itself from KMS, the company told the UN that the statement on its website “was probably drafted with the objective of garnering some of KMS’s successes for Saladin’s subsequent benefit”.

Saladin did not specify which of “KMS’s successes” it sought to benefit from. In March 1987, the US Congress heard testimony that Walker had led KMS’ work with US marine colonel Oliver North and the Contras in their covert bid to overthrow Nicaragua’s democratically elected Sandinista government.

Walker was specifically implicated in the bombing of a hospital in the capital, Managua – an act which Nicaragua’s then foreign minister characterised as terrorism.

Criminologist Dr Rachel Seoighe, a consultant for the Tamil Information Centre, told Declassified: “Walker proudly announced that Saladin is KMS’s successor company in private correspondence to Sri Lanka’s brutal Special Task Force; this is now being publicly denied because it may have reputational and legal consequences – including allegations of war crimes committed by KMS, the company he co-founded and in which he played so intimate a role in Sri Lanka and elsewhere.”

She added: “Saladin can’t have it both ways: claiming the ‘successes’ of KMS while distancing itself from atrocities linked to the company.”

Walker owns up to 75% of Saladin’s shares, according to records filed at Companies House, with the remainder allocated to a Mrs Barbara Walker. She is also registered as a director of Abercrombie & Kent Philanthropy, a conservation group which is helping to save endangered leopards in Sri Lanka.

Saladin acknowledges that Walker did work for KMS, but claims he was “not a director” of the mercenary firm. Its letter to the UN adds: “All the key UK figures from that time who were shareholders and/or directors of KMS are now dead.”

While the chairperson of KMS, colonel Jim Johnson, died in 2008, the people Walker worked with in the 1980s were under the impression that he held a very senior position at KMS. For example, Oliver North wrote in a 1984 memo: “I met with David Walker, a former British SAS officer who now heads two companies (KMS and Saladin).”

In another file, which Declassified obtained through a freedom of information request, Foreign Office mandarin Sir William Harding described Walker in 1985 as the “joint founder” of KMS.

Dr Seoighe commented: “Walker’s fingerprints are all over the company’s history. Claiming that all KMS’s senior figures are now dead is an attempt to shut down legal avenues of accountability, which – because of the Metropolitan Police war crimes team investigation – may now be on the horizon.”

Saladin also told the UN that while the two firms “ran side-by-side for a time” they undertook “entirely different tasks”. It said Saladin focused on guarding against “kidnap and ransom” while KMS “by contrast provided military or paramilitary training and personnel”.

European officials complained in the 1980s that the company’s senior staff were “useless” at enforcing discipline on their Ugandan contract, with the result that KMS men had been involved in “several major car accidents, drunkenness, etc.”

They described the company as “very accident prone” and questioned its professional competence after KMS staff failed to deal effectively with two vehicle hijackings.

Saladin, which now operates in Ghana, Kenya and Afghanistan, assured the UN experts that it had “never been the subject of any investigation or enquiry regarding human rights violations”.

The firm, which employed 33 staff in 2019 with a turnover of nearly £2-million, said its compliance with human rights regulations was “exemplary” and “at the forefront of international best practice”.

It added that Saladin adhered to the 2008 Montreux Document and was a founding member of the International Code of Conduct Association (ICoCA). These are voluntary codes to promote “the responsible provision of private security services”, and the ICoCA website makes clear that it “creates no legal obligations and no legal liabilities for companies”.

A letter from the UK Foreign Office to ICoCA, obtained by Declassified through a freedom of information request

This form of industry self-regulation was created following resistance by powerful countries to an international ban on mercenaries. Such a proposal was being considered at the UN during the 1980s while KMS was fighting in Sri Lanka.

As Declassified has previously revealed, by 1989 Britain’s top diplomat at the UN regarded the proposed ban as an “acceptable text” for Western countries as it would only hinder mercenaries involved in “nefarious activities such as a coup”.

Britain’s decision to endorse the UN ban on mercenaries was left with three members of Margaret Thatcher’s cabinet, including armed forces minister Archie Hamilton, who went on to become a director of Saladin.

Britain never signed the UN treaty, and instead the Foreign Office has promoted voluntary initiatives such as ICoCA. Declassified has found that the Foreign Office’s Responsible Business Team discussed Saladin “informally” with ICoCA before writing to the group in July to “better understand… the due diligence process” applied to Saladin’s membership.

Chris Galvin, head of communications at ICoCA, told Declassified: “The allegations against Mr Walker are particularly serious, and we are monitoring closely the management of the allegations by the relevant authorities in the UK to determine what action to take.

Galvin added: “If a company does not fulfil its reporting requirements or does not take steps to remedy non-compliance or is found to be in gross-violation of the code, they are expelled from the association.”

Declassified emailed Walker and Saladin for comment about the Metropolitan Police investigation into KMS, but received no response.

Two days after Saladin replied to the UN experts, Declassified visited Saladin’s current office in west London to ask if Walker was available to speak to us.

A Saladin staffer replied through an intercom: “He’s not, I’m afraid no… You’re welcome to put any questions on an email.” When Declassified said we had already emailed several times asking for comment, and wanted to speak to Walker about the police’s war crimes investigation, the staffer said: “Thanks very much, bye.” DM

Phil Miller is a staff reporter for Declassified UK, an investigative organisation covering British foreign policy. His book, Keenie Meenie: The British Mercenaries Who Got Away With War Crimes, is available to buy from Pluto Press. His documentary about KMS will be released on 30 September by Declassified and Yardstick Films.