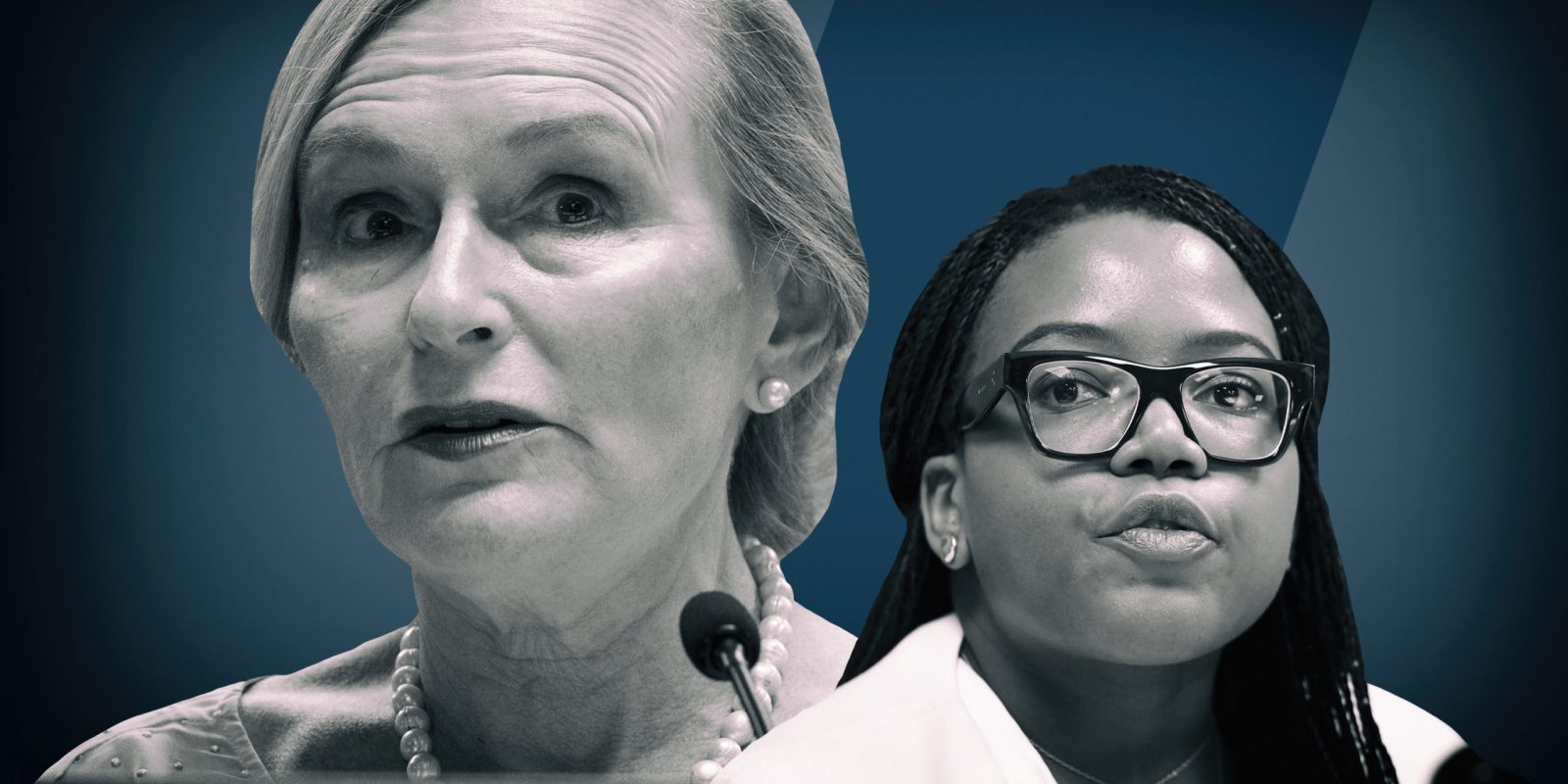 The DA no longer recognises race. In South Africa, where inequality is historically deeply racialised, the DA has turned Trumpian – accepting what it calls ‘scientific’ indicators of inequality like deeply skewed income and wealth or inadequate health, housing and education. But not their correlation to race.

This was in response to a question on the party’s attitude to #BlackLivesMatter, the global racial and social justice movement where taking the knee has become a demonstration of solidarity since quarterback Colin Kaepernick’s 2016 example that cost him his career – US President Donald Trump has consistently described this protest as disrespectful and in 2018 said that protesters “shouldn’t be in the country”. Most recently, #BlackLivesMatter solidarity protests are on the US Open tennis courts, displayed by the masks bearing the names of black victims of US police as worn by tennis ace Naomi Osaka.

“We would not be forcing people to undertake a particular action,” said Ngwenya, in what could be regarded as a reference to the eight South African Sale Sharks rugby players not taking the knee with everyone else at their mid-August match in England.

Ngwenya’s answers illustrate the DA’s sharp turn to classic liberal ideology centred on the individual, meritocracy, rule of law (mostly contract law), limited state involvement, if at all, in a free market society with a nod to the more vulnerable as defined by a means test.

In this classical liberal paradigm, race cannot exist, as it undermines individuality and merit, hence the DA policy conference’s turn to describe race as a false construct.

In many ways, race as a biological determinant has long been ditched in academe and the public discourse. Unless it’s the Ku Klux Klan or the British National Front, few would defend biologically ascribed ability, capability and talent these days.

But classical liberalism’s dismissal of race stands in sharp contrast to the prevailing approach in academe and public discourse where critical race theory places race as central to socioeconomic power relations in society. And this approach recognises systemic institutional racism to explain the exclusion of black persons from, for example, quality jobs and healthcare, or the exclusion from positive public representation.

The DA’s turn to classical liberalism is a push against race as crucial in socioeconomic power relations – effectively being at the wrong end of the stick as is the lived reality for too many millions of South Africans.

Asserting classical liberalism’s individuality and meritocracy is a little like Trump, amid the continued race justice protests against police brutality and in support of #BlackLivesMatter, pushing back to end sensitivity training including topics like white privilege and critical race theory because these were “divisive, anti-American propaganda”.

Too obtuse? Too convoluted and complicated? Perhaps, but this ideological framing is crucial to explain the DA’s policy lurches.

A more social liberalism that accepted race as a proxy for disadvantage and underscoring the need for redress – a key win in 2013 for then parliamentary leader Lindiwe Mazibuko, and what was then dubbed the Black Caucus – has been undone at the past weekend’s policy conference.

And central to it are Ngwenya and DA Federal Council chairperson Helen Zille, who both found a home in the Institute of Race Relations (IRR). Ngwenya was a chief operating officer before she became a DA MP and policy honcho. Zille became senior fellow after her second, and constitutionally last term as Western Cape premier ended. Her stint at the IRR was somewhat short-lived, after she decided in October 2019 to stand for DA office.

The IRR blurb in welcoming Zille is telling:

“She will be adding her considerable influence to IRR efforts to build support to stop expropriation without compensation (EWC); protect savings and pensions; halt efforts to destroy the South African healthcare sector through NHI; and adopt empowerment policies based on actual disadvantage and not race.”

And economic policies spun on inclusion of the excluded but blind to race is what was adopted at the DA policy conference.

So let’s call what happened a rearguard take-over by the IRR, courtesy of Zille and Ngwenya.

And all that in less than a year after the IRR #SavetheOpposition campaign to hold the DA to its claim to be a liberal party, according to a statement, with the call to “expel racist leaders”, end “its dalliance with the EFF” and “stop race-based policies”.

Back to the DA’s newly adopted policy set. Its race-less economic justice document is an important win for Ngwenya. It comes some 18 months after she resigned as policy honcho under Maimane following clashes over her take on non-racial black economic empowerment.

Now, these race-less policies have passed the first hurdle: the DA policy congress. If they are to be adopted it will be at the upcoming congress – the DA constitution stipulates policy is adopted and approved by federal congress, the highest decision-making body of around 2,000 delegates that’ set to gather at the end of October.

Whether delegates actually get to have a real say, or just adopt a pre-prepped policy document, may yet become another internal party fight in what seems to be a well-coordinated push. The DA constitution gives tremendous power to the federal council chairperson, Zille.

If these policies approved at the past weekend are adopted at the end of the October federal congress, Ngwenya would have left a permanent stamp on the DA, as these policies effectively constrain the next DA leader.

DA leadership: The party under Steenhuisen must now face up to race, redress and electoral mishaps

On Monday Ngwenya acknowledged the economic justice policy was what she had drafted while serving as policy boss under Maimane.

“The economic justice policy has been ready for two years. The position on empowerment… has changed three times under the previous leadership precisely because the party would not have the conversation about what the economic policy should be.”

These comments echo her January 2019 resignation over policy differences after she was rebuked for an August 2018 article on how the DA was exploring “a non-racial alternative” to black economic empowerment.

“Instead of having the courage of its convictions, at the mere whiff of a debate on BEE the party felt it best to attack the head of policy than to own up to its own structure’s decision,” Ngwenya wrote then.

It’s now on the table, supported by what seemed to be a smooth, mutually engaged choreography of responses between Zille and Ngwenya during the virtual platform briefing on the policy conference.

‘Race is a false construct’

“Each individual is unique and not a racial or gender envoy; thus, diversity is not demographic representivity,” says the DA diversity policy, before adding it opposed race, gender or any other kind of quotas.

“While there is a scientific consensus that ‘race’ itself does not exist – racialism and racism do exist and have a profound and damaging impact on the lives of individuals and society. They are abhorrent and detestable.”

But while the party acknowledged apartheid, undefined are racism and racialism.

“Race is a false concept but that does not mean people can’t do horrible things… The Holocaust was based on false beliefs about people,” Ngwenya explained on Monday.

“People could believe in a false thing like race. It doesn’t make it real… We will always fight the horrible things that people do on the basis of race.”

Redress is defined as “the need to remedy or correct an unfair or unjust situation”. That’s achieved by remedying “inequality of opportunity” by interventions in education, healthcare, the economy and safety and security. Move to cross-reference the economic justice policy talk of good governance, and inclusion, for the “open opportunity society for all”. A means test would protect the most vulnerable, and because of poverty and inequality, black South Africans would benefit, but just not on the basis of their race.

This race-less economic justice policy was described by Ngwenya as an “imaginative, new policy offer the DA can own” by offering inclusion to those currently excluded by the governing ANC patronage systems, as most graphically illustrated by the Covid-19 personal protective equipment tender scandal.

As Zille pointed out at Monday’s briefing, race was how former president Jacob Zuma appointed his cronies. “[Race] has continually been used by the ANC to loot,” she said, adding later, “the DA goes on principle, not on someone’s skin colour”.

Pulling together critiques of cronyism, corruption and elite patronage – and thus punting inclusion – the DA hopes its race blind spots will appeal to voters.

It’s a gamble. But not for either Ngwenya or Zille, if as expected she’s re-elected as federal council chairperson. If the DA flops in the 2021 municipal poll, precedence of the last election debacle shows it will be the leader who’ll carry the can.