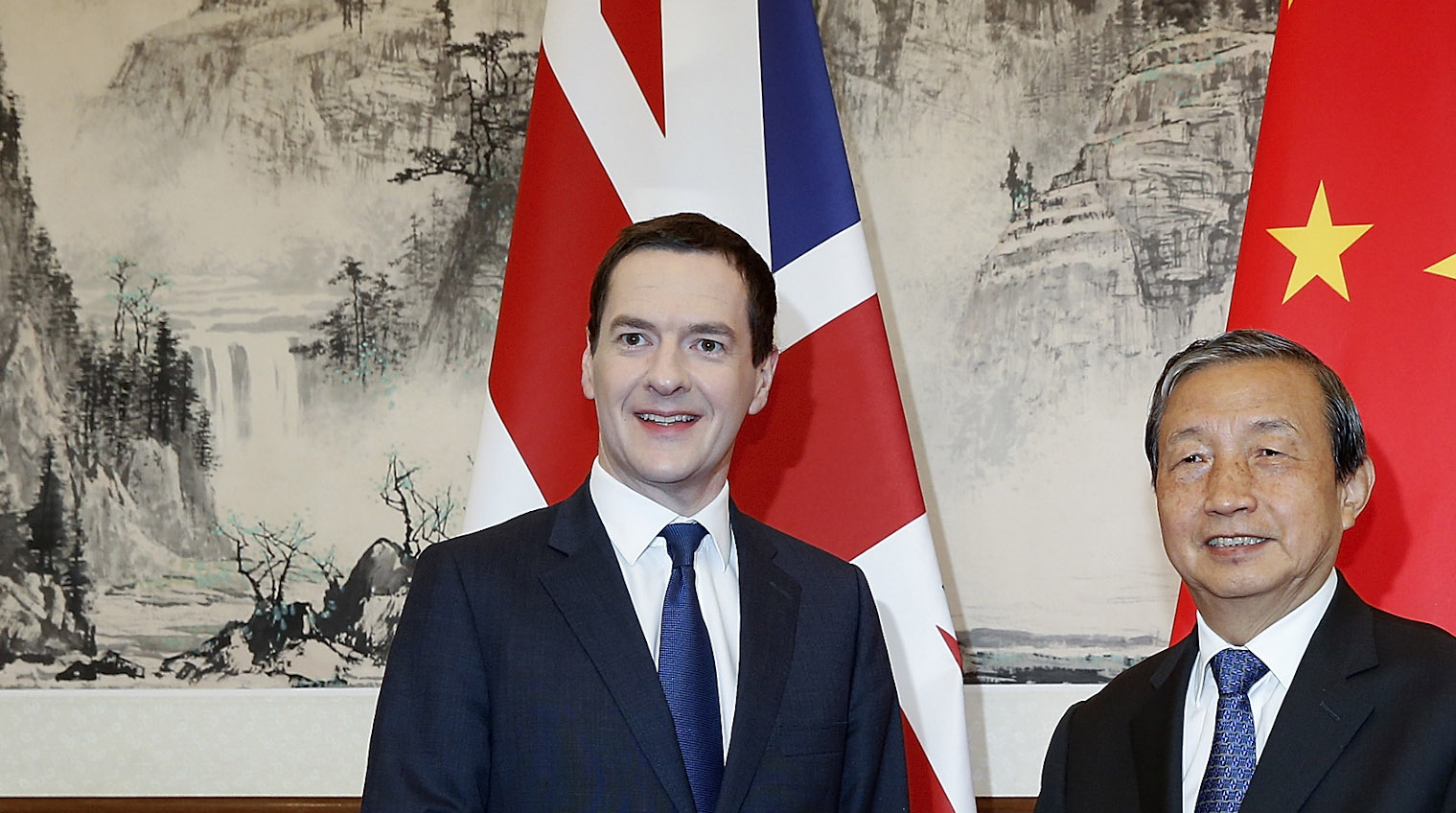 Declassified UK has also found that Chinese military officers have attended Britain’s most exclusive military academy over the last two years. Academy staff even visited the Huawei HQ in China, seven months before the head of MI6 expressed concerns about the tech giant.

Britain’s navy gave training to a Chinese maritime agency that was closely involved with occupying disputed islands in the South China Sea, Declassified can reveal. The course took place in 2015 at a five-star hotel as part of a project costing UK taxpayers tens of thousands of pounds.

The secretive naval training occurred days before the UK’s then chancellor, George Osborne, gave a speech in which he said: “Let’s stick together to make Britain China’s best partner in the West… and create a golden decade for both of our countries.”

Relations between the two countries have deteriorated significantly since Osborne’s statement. The Royal Navy is now planning to send an aircraft carrier to patrol the South China Sea where Beijing is building military bases on disputed atolls such as the Spratly and Paracel Islands.

However, the Royal Navy previously gave assistance to a Chinese maritime agency at the centre of the controversy over Beijing’s territorial expansion, according to documents obtained by Declassified through freedom of information requests to the Ministry of Defence (MOD).

At that time, the SOA was responsible for enforcing laws “in the sea areas under China’s jurisdiction to protect the country’s rights”. Crucially, the SOA also commanded China’s coast guard, whose well armed vessels have been involved in two-thirds of the confrontations in the South China Sea. The coast guard has since been transferred from the SOA to the military police.

Although China has been steadily expanding its military presence in the region throughout the last decade, Hollins assured the SOA that the “cost of tuition, accommodation, breakfast and lunch is provided by the UK”.

The course, which cost Britain £28,000, was held at the luxurious Grand Millennium Hotel in Kuala Lumpur, Malaysia. A further 29 officials from eight other Asian countries, including the Philippines, were also invited.

Hollins told China’s SOA that the course would cover “boarding operations, fishery protection and the employment of aircraft in support of Exclusive Economic Zones (EEZs)”, the area of water that extends 200 miles off a country’s coast containing its fishing and resource rights.

The invited SOA officials were “equivalent to Lieutenant Commander/Commander rank” and had “an active role in the protection of their EEZs”, raising the prospect they could be involved in attacks on foreign fishing vessels in the South China Sea.

The Chinese Coast Guard’s tactics in the region have allegedly included boarding vessels, threatening fishermen at gunpoint and using water cannons to ward off foreign boats from islands claimed by China. Dramatic footage filmed weeks before the UK course shows the Chinese Coast Guard ramming a Vietnamese vessel near the Paracel Islands.

Shortly after the training took place, Britain asked to have “neutral observer” status at a United Nations tribunal which was adjudicating on the sovereignty dispute between the Philippines and China over the Spratly Islands.

According to the Guardian, the timing of the move “prompted suggestions that Beijing has asked London to get involved as a potential go-between in the military standoff between China, the Philippines, other Asian nations and even the US”. The tribunal later ruled in favour of the Philippines.

Last week, Britain’s minister for Asia, Nigel Adams, told parliament: “We do not take a position on competing sovereignty claims [over the islands]. Our commitment is to international law, particularly to… freedom of navigation and overflight.” Adams added that the UK was opposed to “militarisation” of the region.

Yet the “golden decade” began to unravel in 2018 when the Royal Navy sailed its troopship, HMS Albion, close to the Paracel Islands. China’s foreign ministry described it as a “provocative” action that “infringed on China’s sovereignty”.

The British government now states that, “As part of the Royal Navy’s persistent presence in the region, five ships have transited the South China sea since April 2018, most recently HMS Enterprise in February. Those deployments involve defence engagement with regional partners, multilateral exercises and maritime surveillance.”

In July 2020, The Times claimed the Royal Navy “have drawn up plans to base one of Britain’s new aircraft carriers in the Far East to play a part in countering an increasingly assertive China”.

Despite mounting tensions at sea, bilateral relations between the UK and China on land remained relatively warm until recently. Declassified has found that Chinese military officers have attended Britain’s most exclusive military academy throughout the last two years.

Chinese officers have been taught at the prestigious Royal College of Defence Studies (RCDS) in Belgravia, west London, as well as the MOD’s Advanced Command and Staff Course in Shrivenham, Oxfordshire.

In 2018, the RCDS trained 98 senior military personnel, more than half of whom were foreign nationals. Many of the delegates came from militaries which have poor human rights records, such as Saudi Arabia, Egypt and China.

Although Britain has partly observed an EU embargo on arms sales to mainland China since the Tiananmen Square massacre in 1989, the ban does not extend to military training.

An “integral” part of the training offered by the RCDS involves “overseas study tours”, which the MOD says are vital for understanding “prospects for security, stability and prosperity in different regions”.

These have included trips to China with support from the British embassy in Beijing. In May 2018, an RCDS team consisting of British military officers and their foreign counterparts visited the corporate headquarters of Huawei, China’s giant tech company, in Shenzhen. The purpose was to “understand high tech, IT and ICT achievements and ambitions in China”.

A briefing note for the visit suggested that “discussion could include: how Huawei earned its reputation” and advised delegates to bring a gift for their host. The type of gift was not specified.

Seven months after this visit to the heart of Huawei, the head of Britain’s external intelligence service, MI6, Alex Younger, began to question whether the Chinese corporation could be trusted to run Britain’s 5G mobile data network.

Younger said Britain needs to decide how comfortable it is “with Chinese ownership of these technologies”. In July 2020, the UK government decided against using Huawei due to national security concerns.

While in Shenzhen, the RCDS team also visited the offices of TenCent, another Chinese tech giant which owns WeChat, the country’s closely monitored version of WhatsApp.

The plan for the visit noted that the aim was to “understand social networking” in China and discuss “balancing public security and personal privacy”.

The RCDS students received a lecture from China’s ministry of foreign affairs on the most recent national congress, a twice-per-decade event in which Communist Party delegates discuss the country’s future.

The trip also included lectures on “China’s economic reforms” and its “Belt and Road” development projects, as well as a session at Beijing’s National Defence University and sightseeing trips around the Forbidden City and Great Wall of China.

Flights and accommodation for the trip, which also took in Japan and South Korea, could have cost in the region of £188,000, based on similar data from other years.

Sam Walton, chief executive of campaign group Free Tibet, told Declassified: “The training of the State Oceanic Administration and the British military academy’s ‘gift’ to Huawei look like shameless attempts to please key organisations in one of the most powerful human rights abusing countries in the world.

“Huawei in particular has helped enable serious human rights violations in China including the surveillance, incarceration and forced ‘re-education’ of Tibetans and Uighurs. The visit and ‘gift’ to the company from the British military organisation runs counter to public claims that the UK government fights for human rights and democracy. Lessons must be learnt from this shameful episode.”

Declassified did not contact the MOD for comment, as its press office has said it will “no longer deal” with our publication. DM