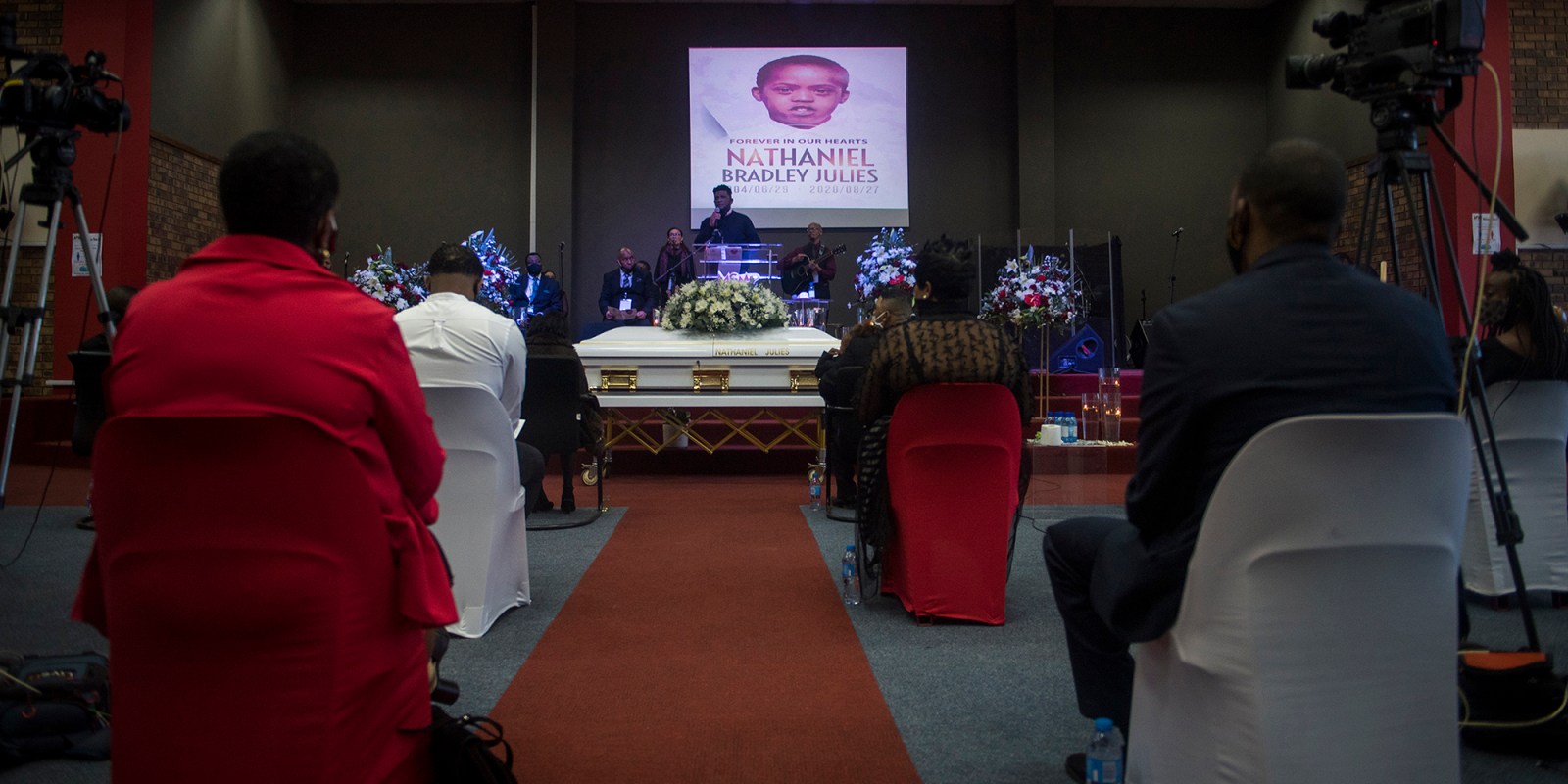 The coffin of Nathaniel Julies is seen during the church service at the Mount Carmel Ministries Church in Eldorado Park. Due to Covid regulations, many of the Julies family members were unable to enter the church. (Photo: Shiraaz Mohamed)

Nathaniel Bradley ‘Lockie’ Julies was laid to rest on Saturday 5 September. Had he not been shot by the police it would have been the day he got his fortnightly haircut from his uncle.

Cyril Brown would have given his nephew Nathaniel Bradley “Lockie” Julies a haircut on Saturday– instead it was the day he helped prepare the teenager’s body for burial.

“You know, I would cut his hair every second week. Like today is Saturday, he was supposed to get his haircut or a top-up on his haircut. I gave him that… He is looking like a real gentleman, his hair is still in tune,” Brown said.

“It breaks my heart knowing that I have given him his last cut,” Brown said.

Nathaniel, 16, who had Down Syndrome, died at the Chris Hani Baragwanath Hospital on Wednesday 26 August after he was shot by the police just metres away from his Eldorado Park home. Nathaniel’s killing sparked violent street protests the following day as residents of the community threatened to burn down the local police station. The police fired rubber bullets at protesting youths who threw stones at the police and police vehicles and blocked roads near the police station with rocks and burning tyres.

Authorities said Nathaniel was killed after he was caught in a crossfire between robbers and police, but community members and his family said he was killed after police officers got frustrated with his lack of response to their questioning.

Three police officers, Simon “Scorpion” Ndyalvane, 46, Caylene Whiteboy, 26, and Voster Netshiongolo, 37, have been charged in connection with the murder, and have appeared at the Protea Magistrate’s Court. The case was postponed to 10 September. Daily Maverick reported on 1 September that the State said it would oppose bail for all three accused police officers.

Nathaniel’s funeral was attended by many Eldorado Park residents and sympathisers.

Brown told Daily Maverick he was distraught and that the family was shattered.

Brown said he wanted the law to come down “very hard” on Nathaniel’s killers.

“I just wish you guys could see what you have done. The breakdown that you caused the family, and that he was killed by people who were supposed to protect him,” said Brown.

Apart from his love for his biscuits, singing, church, and dancing, Nathaniel was also described by Brown as a unifier. Brown said when the family fought, everyone would calm down as soon as Nathaniel walked into the house.

Added Brown: “When he enters during a fight, everything would come to a standstill, the whole atmosphere. Those guys have taken something precious from the family.”

Dozens of police officers and about 20 police vehicles, including two Johannesburg Metro Police Department (JMPD) and SAPS trucks, were at the funeral. It appeared that the police were expecting unrest, but none occurred despite tensions running high since the killing.

EFF members were involved in a scuffle with the police at the entrance to the cemetery when they wanted to enter despite not being on the list of those allowed into the cemetery.

The coffin containing Nathaniel’s body lay at the cemetery entrance for over half an hour as the scuffle continued, preventing police from opening the gate.

“The EFF are heartless, what commotion are they causing at the gate? Do they lack empathy for the family so much that they do not see that the family have gone through enough already and just want to bury their son?” said one mourner.

Nathaniel was finally laid to rest at around 4pm with residents watching proceedings through openings in the perimeter wall. DM