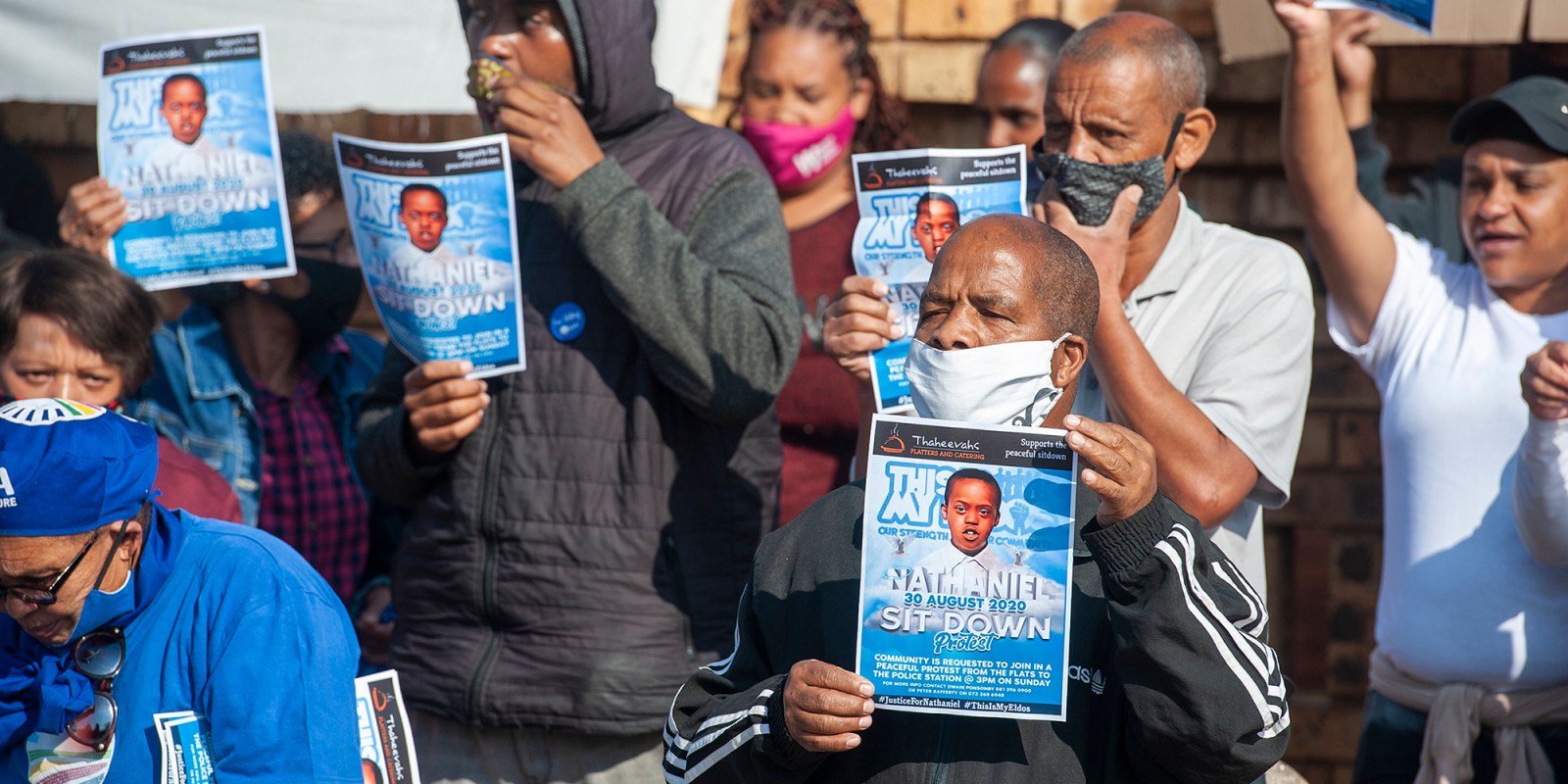 A group of supporters stands outside the Protea Magistrate’s Court in Soweto ahead of the appearance of the two police officers charged with the murder of Nathaniel Julius. (Photo / Shiraaz Mohamed)

The officers face four charges, including murder, defeating the ends of justice, discharging a firearm in public, and being found in possession of prohibited ammunition.

Two police officers appeared in the Protea Magistrate’s Court on Monday, charged with the murder of Nathaniel (Neteniel) Julies, an Eldorado Park youth. The State said it would oppose bail.

The officers, who appeared in court for the first time since their arrest by the Independent Police Investigative Directorate (IPID) on Friday 28 August, faced four charges, including murder, defeating the ends of justice, discharging a firearm in public, and being found in possession of prohibited ammunition. The case against them was postponed to 10 September for a bail hearing and to allow them to secure legal representation.

“I am happy that the accused are in custody, and that the state has promised to oppose bail, but you don’t know what will happen after that,” Julies’ uncle Cyril Brown said.

“You see, it is good that something is happening, but the history of the police in Eldorado Park speaks for itself. The ailing relationship between the community and police has prevailed because they are incompetent.”

Brown said his distress was heightened when he learnt that one of the officers was female and that they were also coloured. “It hurts that our own can do such at home,” said Brown.

Magistrate Malesela Mhango put the charges to the two officers and made it clear the charges were of a very serious nature. One of the accused, Simon Scorpion Ndyalvane, said he would consult his legal representative, while his co-accused, Caylene Whiteboy, said she would apply for legal aid.

Explaining the charge of possession of prohibited ammunition, Mjonondwane said the ammunition in question was banned after the killing by police of Free State activist Andries Tatane.

Lwazi Mdluli, a member of the Ba Akhi NGO who attended court in solidarity with the family, said they did not trust that justice would be done, especially considering the police’s stormy relationship with Eldorado Park residents and the appalling service community members received at the local police station.

Said Mdluli, “We would like to see swift justice. What will happen now is that they will engage in delaying tactics so that the community and the nation at large forget about the incident.”

Julies was initially thought to have been killed in a cross-fire between robbers and police, but community members and his family said the 16-year-old was killed after police officers got frustrated with his response to questioning. Julies suffered from Down Syndrome.

Just as the case was about to be heard, a scuffle ensued between members of the Economic Freedom Fighters (EFF) and the police outside court. This came as no surprise as heated exchanges between the two factions had begun early on.

The EFF members, under the leadership of MP Kenny Motsamai, said they had come to support the family and community of Eldorado Park.

“What happened in Eldorado Park saddened us. We want to ensure that those responsible end up behind bars, and that they receive no preferential treatment from the state,” said Motsamai.

“The key message is for support throughout the case of Nathaniel Julies. We are demanding regular updates on the case.”

Julies’ father, Clint Smith, said after the shooting the family had been treated abominably by the police and that their experience was unspeakably painful. He said that the police frustrated his efforts to be with his son at the Chris Hani Baragwanath Hospital.

“Why didn’t the police take me to the hospital with my boy?” Smith asked.

During the march against the boy’s killing, Eldorado Park community members said they were tired of lawlessness in the area. Many South Africans took to social media to condemn the killing. DM