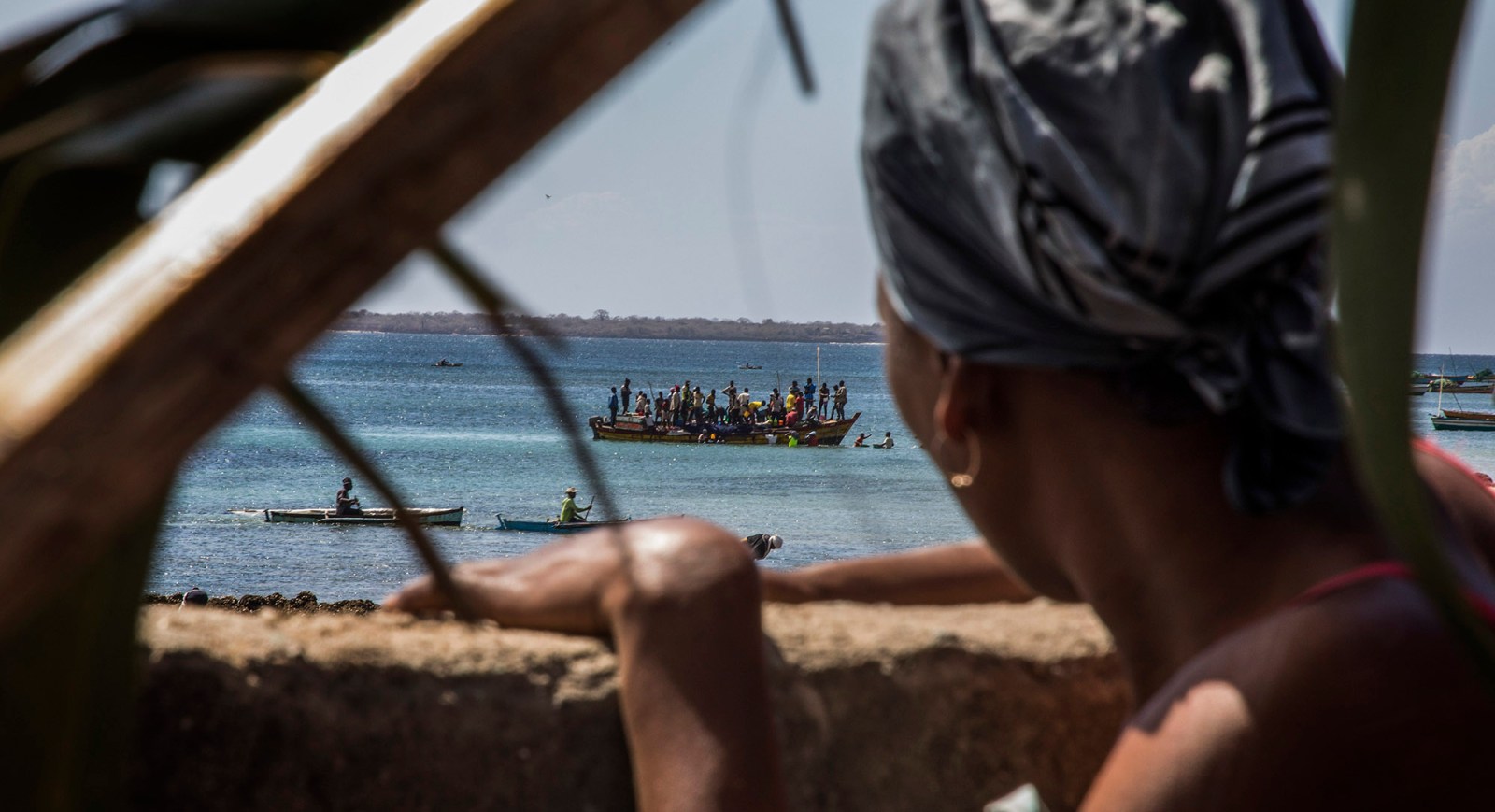 Passengers and cargo board a boat from a fishermen's beach that has become one of the main arrival points for displaced persons fleeing from armed violence raging in the province of Cabo Delgado, in the Paquitequete district of Pemba, northern Mozambique. (Photo: EPA-EFE / Ricardo Franco)

Experts have warned that the growing insurgency in Mozambique can be a future threat in the region, but they differ on how widespread it is at the moment – and on how regional bodies like the Southern African Development Community could help.

Military action might not be the best intervention in the insurgency that has plagued the northern Mozambican province of Cabo Delgado since 2017, experts have warned. It’s also not widespread as yet.

“A narrative is emerging that suggests that the violent extremism witnessed in Cabo Delgado is ‘taking off’ and ‘rapidly spreading’ throughout the SADC region. It is seen by some as the latest SADC security threat,” said Anthoni van Nieuwkerk from the Wits School of Governance at a webinar on Monday 17 August hosted by the Human Sciences Research Council, the Friedrich Ebert Stiftung (FES) and the Africa Institute of South Africa. The webinar coincided with the annual SADC heads of state summit, which was this year hosted by Mozambique.

Although it’s true that there are extreme levels of poverty, pockets of violent conflict, high levels of state fragility, crime and corruption, and democratic setbacks in the region, “there is little evidence to suggest violent extremism is present throughout the region beyond pockets around the East Coast and South Africa”.

Van Nieuwkerk said while some reports suggest that Ansar al-Sunna and Islamic State see the violence in Mozambique as an ideal platform for an insurrection, there’s no suggestion that these operations have expanded into the rest of southern Africa as yet.

He said religion was a limited factor in the spread of violent extremism as only 18% of Mozambicans are Muslim, with poverty and exclusion from development being stronger factors.

Mozambique, with the Democratic Republic of the Congo and Zimbabwe, are considered the most at-risk or highly fragile states, Van Nieuwkerk said, with Comoros, Madagascar and Malawi also mentioned by some experts. He said although South Africa has some conditions that could enable extremist activity, “there is a general consensus that ISIS and its violent ideology have found scant support or sympathy within the South African Muslim community”.

Van Nieuwkerk said that together with SADC’s counter-terrorism strategy, which was created in 2015 but is considered to be classified, the region should consider creating a Prevention of Violent Extremism capacity, hosted by a member state and working with academics and civil society organisations. Non-military responses like these are important, as is a better understanding of how networks are mobilised that enable individuals to become radicalised, he said.

Mozambique has for the past three years experienced unrest and conflict in its northern province of Cabo Delgado, the site of a gas project that has attracted billions of dollars of international investment. The conflict was initially perceived as a rebellion by Muslim youth in the province.

Chatham House Africa Programme leader Alex Vines said, however, that the violence in Cabo Delgado has not dampened the investments long-term “because of the world-class nature of this gas story”. Total and Rovuma LNG are already moving ahead, and Exxon will probably do so next year, he said.

“It is going to be truly transformative for the Mozambican economy,” he said. “The question is, how much will trickle down, how much will Mozambicans benefit from these massive investments that are taking place?” Growth that was not inclusive could result in protests, he said.

Vines said that despite Covid-19 slowing down the GDP growth forecasts for Mozambique, the gas revenues meant it will pick up again by 2022, benefiting the next administration.

“Mozambique is asking for help from SADC to assist in its military effort against these attacks, but can military brigades solve the root issues of uprising in the country?” he asked. The military should act by helping the local population by, for instance, providing water, healthcare and food.

The Mozambican government had already sought help from private security companies from Russia, Zimbabwe and South Africa to contain the insurgency, and had then reached out to other SADC member states in their individual capacities.

Chingotuane also said most members of violent extremist groups in Mozambique came from Kenya, Uganda, Tanzania and Somalia, which meant the root of the problem was in east Africa. He suggested that the East African Community should also play a major role in the solution, even though Mozambique is part of SADC. He said development was a good start for SADC to help Mozambique in dealing with the insurgency, warning that the longer the problem stuck around in Cabo Delgado, the more likely it was to spread through the region.

Armed Conflict Location and Event Data Project analyst Jasmine Opperman agreed that there was a foreign influence, although the insurgency had local roots.

She said, “there is clearly some form of radicalisation taking place amongst the youth” which must not automatically be linked to the Islamic State or Al-Qaeda. She said local extremist group Ansar al-Sunna, which had links to Tanzanians and Kenyans, played a role, and it propagated an extremist narrative.

“At the same time, we should not deny how local conditions have provided the ideal ground for acts of violence,” Opperman said.

She said the fall of Mocimboa da Praia showed that insurgents are now more sophisticated and had access to weapons on a scale never seen before, indicating “that there are definite transnational influences at play within the insurgency”.

She said the insurgents referred to themselves as al-Shabab, the name used by locals. “We have seldom picked up that they refer to themselves as Islamic State,” she said. Although IS has claimed responsibility, Opperman said this did not mean they played a major role.

“This is typical of their strategy of global expansion. The insurgency has allowed them the ideal opportunity for the first time in southern Africa to step in and seek to find a footprint as we see they are propagating in their media channels,” she said.

Unless the government started addressing local dissatisfaction, this violence could become institutionalised, with regional implications, she said.

Institute for Security Studies researcher Ringisai Chikohomero said SADC had not intervened as the Mozambican government had not brought the issue of the insurgents to the regional body for three years, until it did so in May.

“A lot of the protocols SADC has, hinge around member states approaching SADC,” he said.

The Mozambican government had already sought help from private security companies from Russia, Zimbabwe and South Africa to contain the insurgency, and had then reached out to other SADC member states in their individual capacities.

It was not clear what SADC’s Organ on Defence, Politics and Security was planning to do to respond to the crisis, but Chikohomero said the protocol on Politics, Defence and Security provided a legal framework for collective security, enforcement of peace and defence against internal and external threats.

He said there was a hint that member states wanted a military strategy, but for security reasons didn’t want to talk about it. SADC has the hardware, he said, but is reluctant to intervene. DM