Civil society: The state has failed and cannot be trusted, let us help solve the hunger crisis 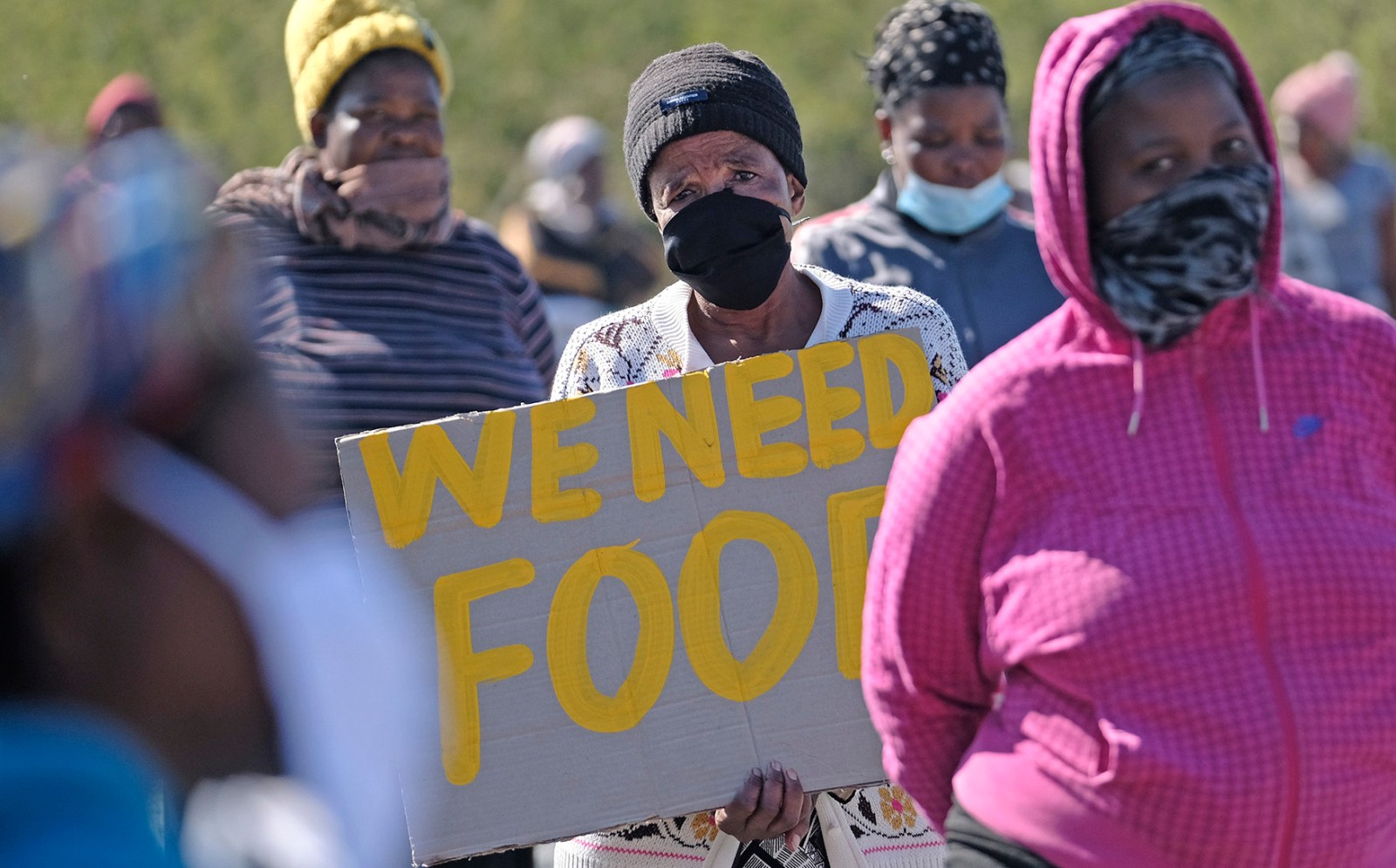 The rise in hunger demonstrates the continuing economic hardship that many people are facing in the wake of the economic turmoil of the lockdown. (Photo by Gallo Images/Dino Lloyd)

The story of the South African state is a litany of failure and broken promises, but a new story is still possible if our government manages to wake up and coordinate a national response of solidarity with civil society and business to bring about systemic transformation to avert a deepening humanitarian crisis.

Stories told among people are important for constructing the imaginary and a collective identity, for shared meanings and for truth-telling. The story we are going to share after the Covid-19 pandemic will certainly not be about a responsive, effective and caring state. In fact, the South African state as custodian of public finances, embodiment of collective will and torch-bearer of human rights is currently a pariah in our midst.

The State’s criminalisation of some of its citizens prior to Covid-19 is now compounded by a deepening legitimacy crisis. The list of its failings is long:

These realities upend the certainties of national liberation thought which justify lapses in ethical conduct or failed policies as mere aberrations in the long march to achieve the common good through the national democratic revolution.

Well, there is no common good when such politics have brought society to the point of complete destruction. A poignant academic definition of social collapse is this: a failure to meet the basic needs of people amounts to social collapse. This is the dominant narrative emerging in South Africa: a society falling apart and a government incapable of rising to the challenge of protecting society.

President Cyril Ramaphosa’s indecisive leadership of South Africa is falling short of what the country needs. It is not him alone, but a ruling party muddling along, with all its contradictory impulses and dangerous tendencies. His approach is to give expression to this mélange of views on how South Africa should be governed, thus ensuring the political party apparatus of the ANC-led alliance prevails, rather than transparent, inclusive, open and democratic policy-making in the interests of the country.

In the end, the country is held hostage to obscurantist political practices.

Leninism did not prepare Marxist-Leninists for pandemics, let alone the complexities of the world we live in, and so they remain firmly perched in the shadows of the ANC, eagerly trying to make themselves relevant.

The neoliberals are obsessed with managing the optics of financial markets which override any concerns for human life.

In this political drama the nationalists are using this state of exception as an excuse for “law and order” approaches to mitigate addictions, such as smoking and alcoholism. In the process they are literally missing the point that there are deeper causes and reforms this government failed to introduce prior to Covid-19, including tighter regulation of the tobacco and alcohol industries, given the externalised social costs of these industries that the taxpayer has to carry.

The solutions from this regime don’t square off with the complexity of the crisis we are living through, which consists of multiple and interconnected socio-ecological crises occurring at once. This involves a climate crisis-induced drought (the first of many to come), a failing globalised economy, a corrupt state and widespread social violence – and now Covid-19.

The common approach of ANC governance has been about controlling citizens from above with “crumbs and the big stick” and generally letting capital do as it pleases, while creating opportunities for the enrichment of a few through the State. This has not worked before Covid-19, and it is certainly not working now to address the challenges of confronting an unequal South Africa overrun by the pandemic.

Before Covid-19, South Africa was exhausted by naïve promises of foreign investment being the answer to all its problems, by brazen and widespread corruption, and by rulers’ disdain for the needs of the people. There is fatigue, anger, desperation and disillusionment in everyday life as Covid-19 takes its toll.

Roaring tides of historical change are churning in spaces of social mobilisation to mitigate the negative impact of the lockdown in communities.

Many understand there is more harm than good coming from the governing party. The spell of the pot of gold at the end of Madiba’s rainbow does not work any longer. Thus many are stepping forward with the assumption that the ANC cannot be trusted, let alone be responsible for rising to the challenges of our time. The simple truth is that it has failed, on the terms of its own ideals, its programmatic commitments and in its leadership of society.

In the midst of Covid-19, hunger has become worse.

In the absence of support from the State and the Solidarity Fund, thousands of communities have attempted to mitigate the hunger crisis through donor-supported food distribution, community kitchens, sharing food and living off the commons (through subsistence fishing for example).

In a study done by the National Food Crisis Forum convened by the South African Food Sovereignty Campaign, a snapshot of community-led food relief efforts suggests a minimum of 206 of these initiatives reach about 53,100 people per week, with the cumulative costs being about R67,688.80 per week and a unit supplied on average costing R340.14  (either a hot meal, food parcel, seeds, cash or voucher).

Today, many of these communities are experiencing serious constraints in their food relief efforts. Local donor support is drying up. Low incomes in communities are also having an effect. Organisations doing this work are buckling under pressures and the need in communities is outstripping local relief. Starvation has already taken human life in the community of Waterworks near Lenasia and will continue to do so.

Appeals have been made to the government and to the Solidarity Fund to consider a nationally coordinated response to the hunger crisis. This simply means democratising the government’s disaster management approach to Covid-19 by bringing in active civil society organisations at national, provincial and local level to address the worsening crisis.

This is a rather obvious move the government could have initiated, especially considering the president’s constant rhetoric of social compacting. Addressing the hunger crisis together as government, the Solidarity Fund, progressive civil society and business would demonstrate solidarity in practice and will be more effective.

Failing this the United Nations human rights machinery, including its World Food Programme and Special Rapporteur on the Right to Food, will have to be approached to trigger humanitarian assistance for many facing starvation in the country.

Furthermore, given the fragmented and limited welfare grant system in South Africa, the demand for a substantive and universal basic income grant (UBIG) as the linchpin of our welfare architecture has gained widespread support across progressive civil society and in the public sphere.

If South Africa were to hold a referendum on this idea, it would probably win overwhelming support and get higher voter turnouts than during elections.

The South African Food Sovereignty Campaign recently hosted the leading expert in the world on the universal income, Prof Guy Standing, for a public webinar on the case for such a measure. While he reflected on numerous examples and lessons, his message overwhelmingly was simply this: South Africa cannot afford not to have such an income transfer, and not just as a temporary relief measure, but rather to address deep structural inequalities.

A recent measure of income inequality suggests 10% of income earners have 65% of national income. This means the billionaires in our society live at the expense of all of us.

South Africa is an unviable society because a minority just has too much, and that simply has to end.

A #UBIGNOW, carefully designed, not eroding but improving existing transfers, and based on redistribution from the wealthy, envisions a systemic transformation that can cushion society, ensure a people-led recovery and be a crucial mechanism to mitigate multiple systemic crises. Its time has come.

In short, coordinating a national response to the hunger crisis and speedily introducing a non-means-tested universal income grant transfer now for all living in South Africa, including documented migrants and refugees, could be the solidarity story we tell as a society after Covid-19.

The government has to wake up and understand that society is too big to fail – it must be protected now. DM/MC

Vishwas Satgar is an associate professor of International Relations at  Wits University and an activist in the South African Food Sovereignty Campaign.