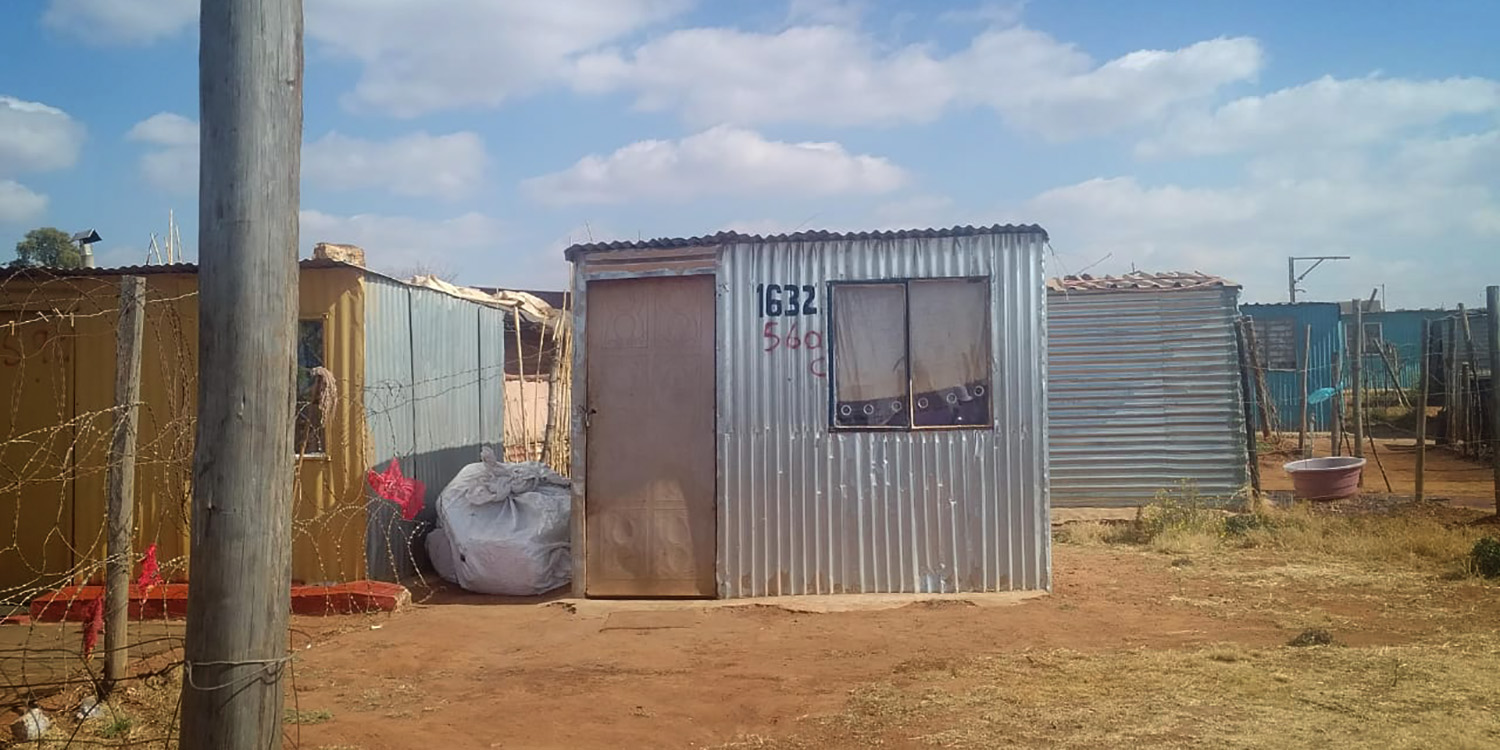 According to residents, Thabiso Mokhele, who allegedly died from starvation, was not the first Lesotho national to meet a dire end in Waterworks near Lenasia during the lockdown. His death came as the community battles poverty, hunger and unemployment.

Thabo Matalingoane, 41, a friend of deceased Thabiso Mokhele, said he was distraught. Matalingoane said he tried to share whatever he could with his friend, but voiced his despair that his efforts had not been enough to keep his friend alive.

Mokhele’s demise comes as the Covid-19 pandemic wreaks havoc across the world, and as this community continues to battle hunger, poverty and unemployment.

The community of Waterworks began with about 800 households. Over the past few years, the community has grown significantly as people took advantage of the EFF-sanctioned land grabs that have plagued the south of Johannesburg.

“Life is unbearable here. Things are out of control. When the train services resume, no train will be able to travel because the cables are stolen daily. Now they have started to dig even the underground cables because they have removed almost all the overhead cables,” Fisusiko Mavundla, a community leader said.

This reporter came face to face with the theft and vandalism as he left the area. Five men were waist-deep in holes dug along the train line leading to Westonaria. They were digging up rail cables. The men looked very relaxed despite their illegal actions. It was not clear whether they were also from the area or from neighbouring Lenasia and Soweto.

The overhead cables had been completely removed and replaced with illegally connected bare wires. The men had spades, picks, saws and an assortment of other tools as they had their way with the Passenger Rail Agency of South Africa’s infrastructure.

The impoverished community of Waterworks consists of 4,260 shacks housing thousands, including unemployed youth and the elderly.

Christina Mathaba, 44, also from Lesotho, says she arrived in South Africa in 2000 hoping to find work.

“I’m forced to beg from neighbours daily,” said the unemployed mother of five. Mathaba said all she and her five kids had had to eat on Tuesday was soft porridge.

“That is all we could make from the little mealie meal that we had, which was shared by a neighbour,” said Mathaba.

The community uses paraffin and wood for cooking. But many have nothing to cook. Residents, even those who qualify for food parcels, said they don’t know what a food parcel looked like.

Another foreigner, Puleng Punane, who does not qualify for food parcels because she is not documented, said the only food item she’d received was a 2kg bag of mealie meal, donated by an NGO from Lenasia.

“During my conversation with the councillor I found that he does not feel like he is obliged to help bring development in the area because his wish seemed to be to dump all our ills on the previous councillor,” said community leader Mavundla.

He said: “I don’t remember the councillor helping us with food parcels since these were announced by the government. We received vegetables from a Soweto NGO once and the Lenasia Indian community also once helped with items such as mealie meal.”

Moletsane said some Basotho living in South Africa had made it clear that they didn’t want the Lesotho government reaching out to them, because they were involved in illegal mining.

Waterworks Councillor Joseph Matjila could not be reached for comment as his phone rang, unanswered, several times.

Gabsile Nhleko, a South African citizen, said she had also not received any food parcels:

“We are overlooked for everything — electricity, water, toilets, food parcels, we have nothing. We have to buy paraffin or invade the veld for wood in order to cook.”

“We are so hungry we could easily eat the crust from a wound,” Nhleko added.

In May, when it became clear that foreign nationals without proper documentation would not benefit from the government’s food aid, Daily Maverick spoke to then Lesotho home affairs minister Mokhele Moletsane. Moletsane said the Lesotho government had reached an agreement with three South African retail giants — U save, Checkers and Shoprite.

Moletsane said the agreement had led to the signing of a contract with the three South African retailers which would allow their stores to distribute either money or food parcels to undocumented Basotho living in the country.

‘Feed us or get us out’: The plight of undocumented Lesotho nationals in South Africa

Moletsane said some Basotho living in South Africa had made it clear that they didn’t want the Lesotho government reaching out to them, because they were involved in illegal mining.

“We have been made aware of the challenges Basotho are facing. We are working on registration of those who say they need immediate intervention from our side for basic needs.”

Moletsane said there were 15,500 Basotho living in South Africa who needed help from the Lesotho government. Basotho in many areas of Soweto said they were asked to register on the promise of food aid from their government, but said nothing materialised after the registration. Basotho in Waterworks had the same experience.

“There was a man who registered our names, but we never got anything,” said Punane. DM