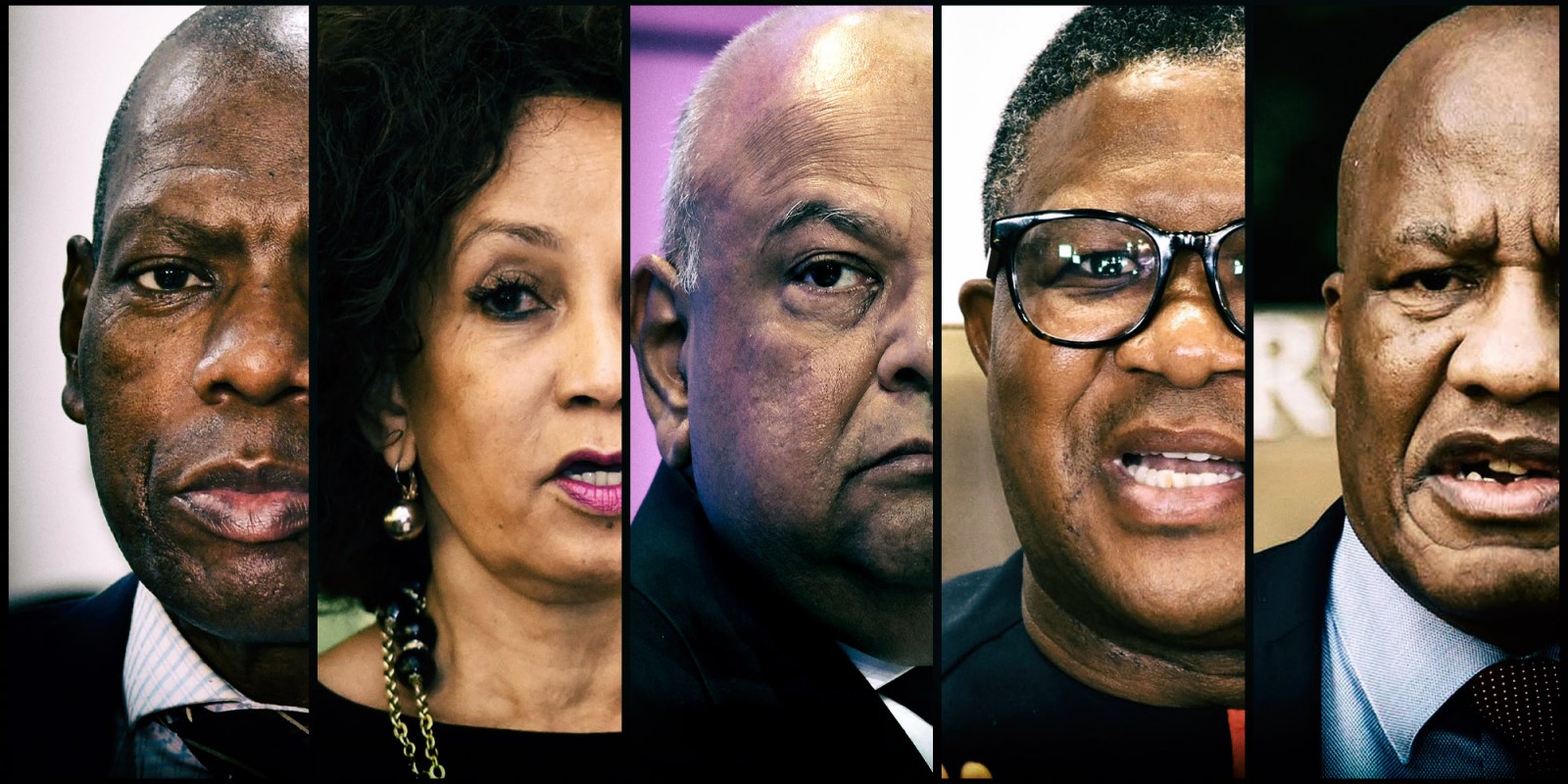 See part 1: Fix South Africa or fix the ANC – Ramaphosa can’t do both

Covid-19 has broken the global economy and shattered South Africa’s as well.

You know the numbers, but these made me sit up: it is likely that the number of people without jobs – 10 million – has grown substantially; while the national purse now pays out 22 million social grants a month, with the extension of beneficiaries.

The interest on the national debt alone is staggering – economist Mike Schussler has shown SA is spending R50-billion more a month than it collects in taxes.

Business, government and labour are negotiating a post-Covid-19 Economic, Reconstruction, Growth and Inclusivity Plan built on the social compacting principles of the 2018 Jobs Summit.

But is the Cabinet up to the task?

A little positivity to start. The outlier in the Cabinet team is Health Minister Zweli Mkhize, whose steady hand at the tiller has been a balm for South Africa as it cracked open under the strain of the coronavirus.

As a doctor, Mkhize’s grasp of epidemiology and health along with a calm personality has made him one of the most trusted politicians in South Africa. In addition, he is tech-savvy and has surrounded himself with a good team to enable regular communication and a science-based approach to the outbreak.

The minister in the Presidency, Jackson Mthembu, has also run a tight ship, with the government communications agency (GCIS) doing well across many platforms at a key task in the pandemic – to get public health messages across.

Finance Minister Tito Mboweni has spent most of the lockdown at his farm in Tzaneen but he gets a place at the top table for sticking to his guns. His special adjustment Covid-19 Budget focused on trying to keep debt levels down, spoke out against populist spending and he criticised corruption before the mass displeasure at the misappropriation of Covid-19 funds made it popular rhetoric to deploy. But Mboweni has a funding problem as shown here, drawn from “Post Covid-19 – a new inclusive future for SA” by Business for South Africa.

The laggard in the pack is a man who is usually a very popular politician: jocular and comfortable in his shoes, Mineral Resources and Energy Minister Gwede Mantashe. He is running two vital portfolios, but neither is ready to help boost the economy, which has taken a knock that will require R2.3-trillion to fix in an initial recovery phase. 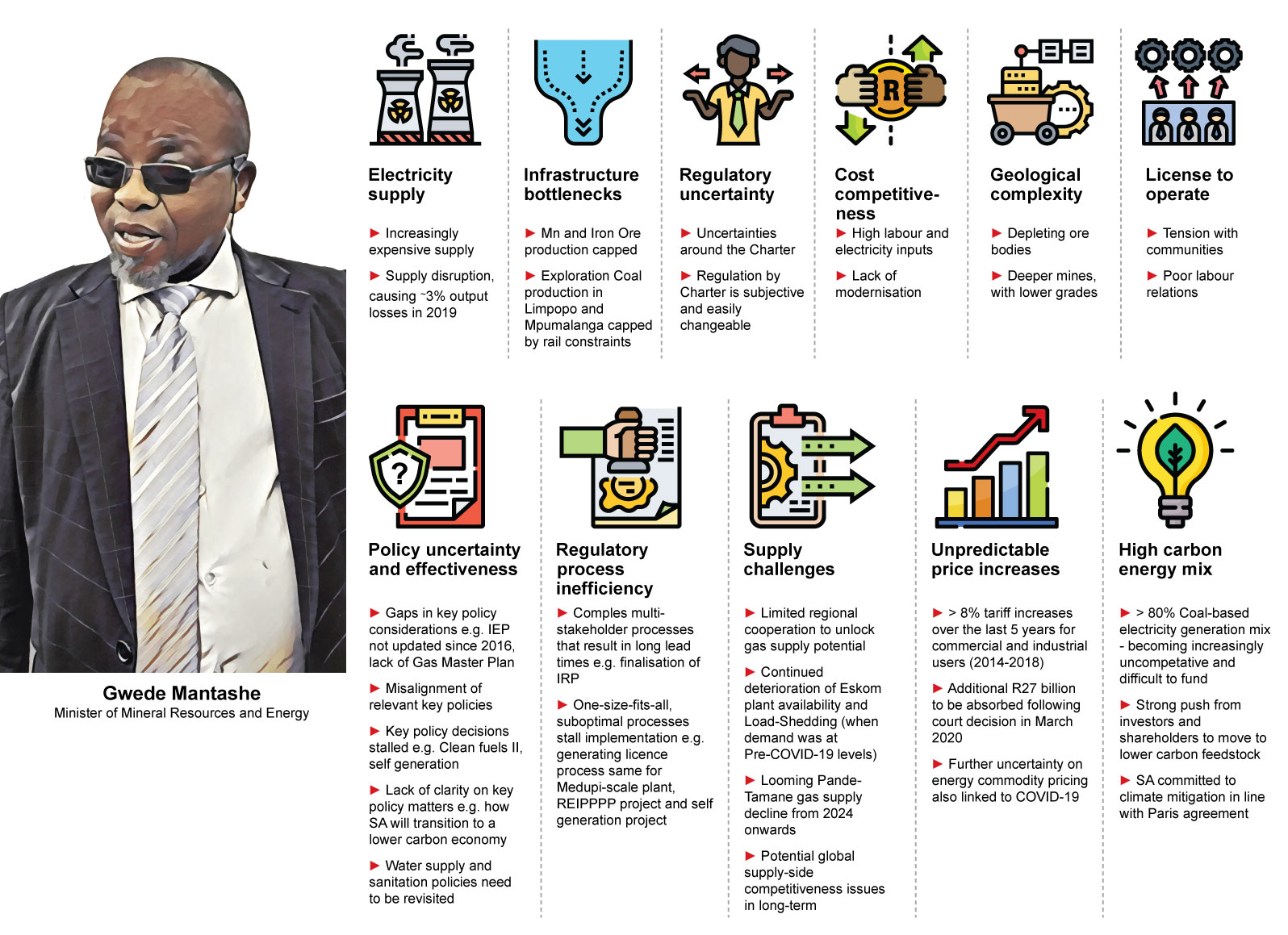 As the graphic shows, both the mining and energy sectors are key to recovery but both are struggling under a burden of regulatory uncertainty and snail’s-pace implementation of measures agreed to in Cabinet and at negotiating forums like Nedlac.

A business diagnostic has pointed to expensive energy supply, uncertainty about the mining charter, supply disruptions and tensions with mining communities as lingering issues Mantashe has not managed to solve in the 897 days he has been in office from February 26 2018 to August 11 2020.

President Cyril Ramaphosa forged a deal with the Minerals Council, the industry body, to take a case against the updated mining charter out of court and on to the negotiating table almost two years ago. As a seasoned negotiator and as a leader who cut his teeth in the industry, this has not earned the president kudos in an industry which has been his biggest fan.

In energy, as Daily Maverick has previously reported, Mantashe has not made progress on any of the key power pledges Ramaphosa made in February 2020 when he addressed the nation. The high carbon energy mix is not shifting because there has not been progress on renewables licences and self-generation, and a new gas master plan is still not complete. Without this, a sector that can generate jobs and confidence in the government is instead a fiscal drain because Eskom is still the only energy show in town. And even at Eskom, reform is slow and the risk of load shedding high.

Economic Development Minister Ebrahim Patel has emerged as a Cabinet star during Covid-19. He assumed a leading role in the Cabinet’s National Coronavirus Command Council which initially administered the government response. But his reputation took a knock in the initial hard lockdown as he and his team wrote regulations governing retail and clothing that were lampooned across the country. Although he said that industry had given him the lists that were turned into regulations, Patel also did himself no favours when he kept e-commerce under lock and key when online sales could have helped keep the economy above water before it tanked as it did.

Where Patel is likely to do well is with his love for manufacturing – he has been closely involved in ventilator manufacturing, one of the few bright economic sparks in a bleak landscape. And he has insisted on procurement from local manufacturers by the state where goods and services were available. That has made him popular with manufacturers and unions. He was a clothing workers’ leader for many years.

But, as the graphic shows, his success will also depend on Cabinet colleagues like Transport Minister Fikile Mbalula to fix transport networks and Public Enterprises Minister Pravin Gordhan, who has been so busy trying to resuscitate SAA that other state-owned enterprises with bigger potential multiplier effects in the economy have not shone yet. Mbalula caved in to the taxi industry, allowing it to fill passenger taxis to 100% capacity when the epidemic was at its zenith. His crack team at Prasa, the passenger train company, has not been able to return even a fraction of the service, which meant workers did not have an option to get to their jobs.

Patel’s success is highly dependent on Labour and Employment Minister Thulas Nxesi, who is responsible for the skills portfolio in Cabinet. It is business’s view that the cumbersome system of skills levies administered by largely dysfunctional sectoral training authorities (Setas) must be completely overhauled.

Nxesi has had his hands full with trying to ensure that the unemployment insurance fund, the UIF, was made more stable in order to pay out the temporary employment relief funds (TERS). And the jury is out on whether, as a former trade unionist, he can negotiate the labour market reforms that will let more jobless people into the market. Various studies show that Covid-19 is now likely to have put South Africa into a real unemployment rate of over 50% of the economically active population who are classified as “discouraged” in the wider and likely more accurate measure of unemployment.

In the graphic, you will see that Gordhan is not perceived to be doing a great job. Business in general and exporters in particular complain about poor port efficiency and high costs; and unsafe rail networks which lead to an over-reliance on more costly road networks. As a successful former finance minister, Gordhan has not been able to restructure or significantly reduce the R760-billion SOE debt, of which R350-billion is on the national balance sheet as contingency reserves. In fact, Gordhan’s SAA strategy will add R10-billion for SAA to that balance. Some sources say a deal has been made to handle some of Eskom’s R480-billion debt by using its pension funds to buy equity, but there is no detail yet on this.

The country’s water networks are regarded by experts as the next Eskom crisis waiting to happen. The detail is set out in the graphic. Water Affairs and Sanitation Minister Lindiwe Sisulu ran her Covid-19 responsibilities from Rand Water, a water board in Johannesburg, and with a consultant rapid response team because she is at war with both the departments (Water and Informal Settlements) which fall under her, according to reports. It’s not clear whether she has even started to detonate the various water bombs she is sitting on or where she will find the R33-billion that experts say is needed to fix systems.

Communications Minister Stella Ndabeni-Abrahams has had a torrid time. She was put on two months’ leave after being spotted on social media having a large family lunch with friends at the top of the hard lockdown. Since then, she has struggled to get her choices for Independent Communications Authority of SA (Icasa) councillors through Parliament – a power many believe she should be divested of.

The graphic shows how she has lost the confidence of the companies in the sector by making major policy changes without consulting. Spectrum (frequency to extend access to broadband and to bring down data costs) has not been deployed, and the department she runs is still regarded as dysfunctional. Battery theft is a huge disincentive for investment in a sector that is key to prosperity.

Little to show for 908 days

The diagnostic document drawn up by business but with contributions from unions and civil society as well as government sets out the challenges awaiting the rebuilding of South Africa.

Applying those challenges across the existing Cabinet shows that it is going to be a long walk to reconstruction as it is not yet the efficient and quick-win structure Ramaphosa promised when he became president 908 days ago (measured on August 11 2020). DM