President Cyril Ramaphosa’s performance has been patchy. Health – good; securitisation – bad; economic relief – decent. He should focus on just one of his two jobs, say analysts.

As the case rate of South Africa’s most infectious pandemic started to slow, a corruption scandal broke in the governing ANC and the party’s secretary-general, Ace Magashule, was once again up in arms.

Magashule said there was nothing stopping families of ANC leaders doing business with the government. This came two days after Ramaphosa cautioned against the practice.

“If, as public servants and political office-bearers, we truly care about the public whose interests we claim to represent, we must allow ordinary members of the public who have interest in doing business with the government a fair chance to bid for such business opportunities, instead of passing on inside information about opportunities to our families and friends,” said the president.

It is the umpteenth time that Magashule has contradicted Ramaphosa’s position, raising questions about who runs the country and where it is run from – ANC HQ Luthuli House or the Union Buildings. Each time this happens, national confidence drops, as it did when Magashule issued a statement that threatened SA Reserve Bank independence, and when he insisted that cadres implicated in the VBS bank fraud be returned to their positions. Now, confidence is at rock bottom again, this time with the hashtag #VoetsekANC trending.

Ramaphosa believes he can reform the ANC as well as fix South Africa, but it is increasingly clear that contestation in the party is intensifying. People are seeing prosecutions on the horizon and are getting more desperate. Cadres are threatened by Ramaphosa’s view that they should not do business with the state, as an entire class of tenderpreneurs (politically connected traders doing business with the state) has grown into an entrenched practice. His reform efforts threaten them and Magashule is their battering ram.

“Ramaphosa is disappointing but he is the best we have,” says an ally who spoke on condition of anonymity. “The problem is his party. The ANC is so rotten that it can’t govern this country. You can’t fix the ANC and the country. He can fix the country, and so try to fix the ANC.”

“On balance, government has managed the Covid-19 response pretty well,” says the same ally. The source said the decision to go into a hard lockdown early on was the right one. The initial economic response was also solid. These included the TERS-UIF relief, tax holidays and loan restructuring by the banks.

But the government was failed by “increasingly irrational regulations”, such as whether people could buy closed or open-toe shoes.

Ramaphosa clawed back goodwill, but then it was squandered by emerging news of the misspending of Covid-19 relief funds.

“The corruption in PPE (personal protective equipment) has really dented government’s ability to handle the crisis. Everybody is taking pain, and some are stealing,” said the president’s ally.

Another former associate says: “I see squandered opportunity. Cabinet takes inordinately long to make decisions.”  The source says the process of writing regulations has been chaotic and inefficient: the regulations on schools reopening, as well as on taxis, were weeks and even months late. This reveals weaknesses in the state, even in a Cabinet whose intentions were largely well-meaning.

A big issue mentioned by various people involved in the response to Covid-19 is its securitisation. The Natjoints (a national joint operation committee) overseen by secretary of defence Sam Gulube and senior police officers, has been an officious but not efficient structure, say people involved.

This has meant South Africa has had one of the most ‘toxic lockdowns’, according to a UN High Commissioner on Human Rights report. In the first few months, 230,000 people were arrested.

“It’s often about hubris and no proper internal processes,” said an official, explaining that the alcohol ban would be seen as a control function rather than a health measure.  If it were seen as a health measure, then a more nuanced strategy might have been adopted, but that would have required a capable state.

“We have no capability to enforce anything complex in this country,” said one of the insiders.

A view from outside 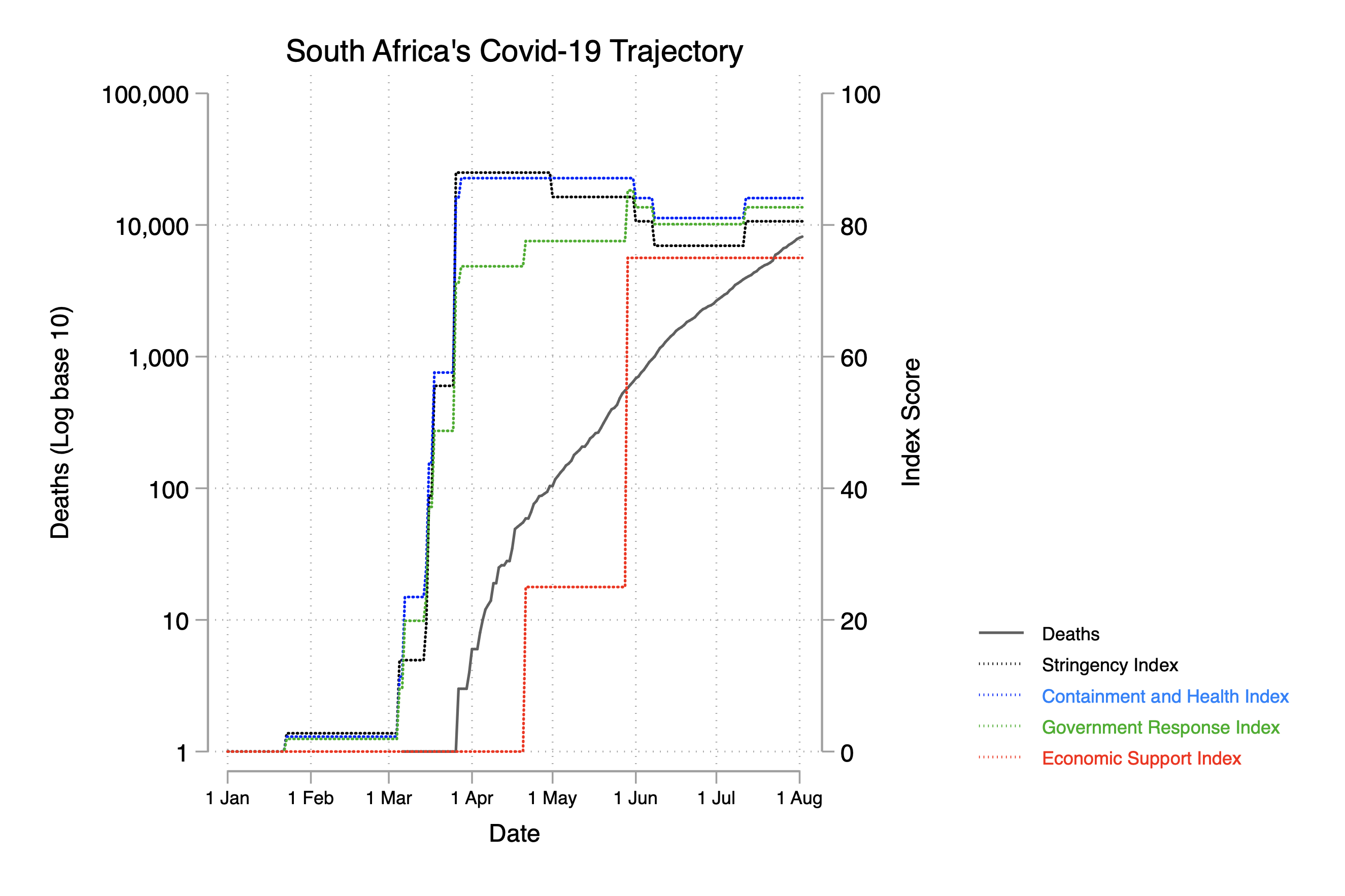 Oxford University’s Blavatnik School of Government has drawn up an index of government response measures to Covid-19. Dr Anna Petherick says she has taught a class on South Africa and Covid-19, because all the big challenges are contained in one country.

“South Africa brings together many things. Historical inequalities as well as current socio-economic inequalities. The national fiscal situation is not great,” Petherick says, adding, “South Africa responded quickly in some aspects and not in others.”

Her chart for Daily Maverick reveals this. Petherick and her colleagues code 17 different types of policy responses to draw up the index. This shows that South Africa acted quickly on the containment and health index, making for a high stringency score. But the economic support index kicked in too late, she says.

“There were issues of implementation.”

Asked if South Africa’s lockdown has gone on for too long, thus hurting the economy too much, Petherick says it’s difficult to say.

She studies Brazil more closely and says the southern states released lockdown too early, leading to far more deaths than in South Africa. But she does warn that “economic impacts lead to (other) public health impacts”.

“No one can go months without support,” says Petherick, adding that lockdowns become less impactful over longer periods for both behavioural and financial reasons.

The pain suffered in the first wave of lockdown is captured in research led by Nic Spaull, where three million people lost livelihoods and incomes (some permanently, some temporarily) while 47% of households reported that it was difficult to put food on the table (where they had a table).

Crossing the river by feeling the stones

Ramaphosa is not a flappable leader, though he is not unaware of how public sentiment has soured. He uses the aphorism of “crossing the river by feeling the stones” to describe the Covid-19 challenge.

And his view about the balance between easing the lockdown and controlling the infection rate is that you can revive economies, but you cannot bring back to life people who have died.

His first concern is to stay on top of the fast-moving and unpredictable pandemic curve, with the damage to the economy seen as a secondary but still important challenge. In all his decades of experience, this is his first pandemic, and the view is that the strategy adopted has been the correct one.

Government believes that its social response has been decent, with Social Development Minister Lindiwe Zulu and Sassa CEO Totsie Memela receiving kudos for quickly bringing an additional 3.4 million impoverished South Africans into the social services safety net through the Covid-19 distress relief fund. There is simply no fiscal space for the per person relief to have been greater than R350 a month, despite the analysis which shows that it likely arrived too late – and was too little.

The president knows his Cabinet takes a long time to make decisions, but the nature of political debate in the ANC and in government is inclusive, with everyone having an equal voice. Crossing the river by feeling the stones takes time: it’s a slow and laborious process and sometimes you fall. Ramaphosa’s view is likely that while Covid-19 will not make or break his presidency, it will certainly define it.

The latest research by Ipsos on a sample survey of 52,000 people done with News24 (targeting people with access to the internet at home or on a smartphone) gave Ramaphosa a rating of 7,34 out of 10 for his response to the crisis. This is high, but it was done before the damaging allegations of misuse of Covid-19 relief funds emerged.

The Western Cape and Gauteng are held up as provincial health systems that have performed fairly well, while the Eastern Cape is recognised as a flailing province.

Saving the ANC or saving the country?

While the ANC is a liberation movement turned ruling party, the PPE procurement scandal, and how it is revealing schisms in the ANC, shows another identity. In many ways, the ANC is now an efficient rent-extraction machine for patronage networks like the Gupta family and others across different spheres of the state.

When Ramaphosa ran for ANC president, it cost R400-million in campaign finance to secure a 179-vote win over his then adversary Nkosazana Dlamini Zuma. After 19 months, he has not yet secured sufficient political buy-in to stop the rot in the party, as Ace Magashule engages him in a near-permanent internecine war.

At the weekend, City Press revealed that Magashule’s network had cornered the market on the Free State’s PPE and Covid-19 procurement.

If Ramaphosa focuses on fixing South Africa by ensuring a capable state through decisions taken without an eye on what it means for this or that faction in the party, he could ensure both his political longevity and his legacy. DM