How Ramaphosa’s campaign spent R400-million — and why it matters

How Ramaphosa’s campaign spent R400-million — and why it matters

It’s a fairly standard cost, says an official, explaining that the ANC now runs big-bucks American-style campaigns for internal elections. ‘The reason people are shocked is that this is the first time it’s been into the light of day,’ a campaigner told Daily Maverick. Others say it is an insight into how to buy a president in South Africa.

Daily Maverick has gained first-hand insight into how President Cyril Ramaphosa built his almost half-a-billion-rand campaign to become ANC president and how the money was spent to win the top spot at the party’s elective conference at Nasrec in Johannesburg in December 2017.

“The biggest nonsense is that we had R1-billion. In our dreams,” said a campaigner who would speak only on condition of anonymity. “…We spent about R275-million and we were left with considerable debt for which we still had to fundraise.” 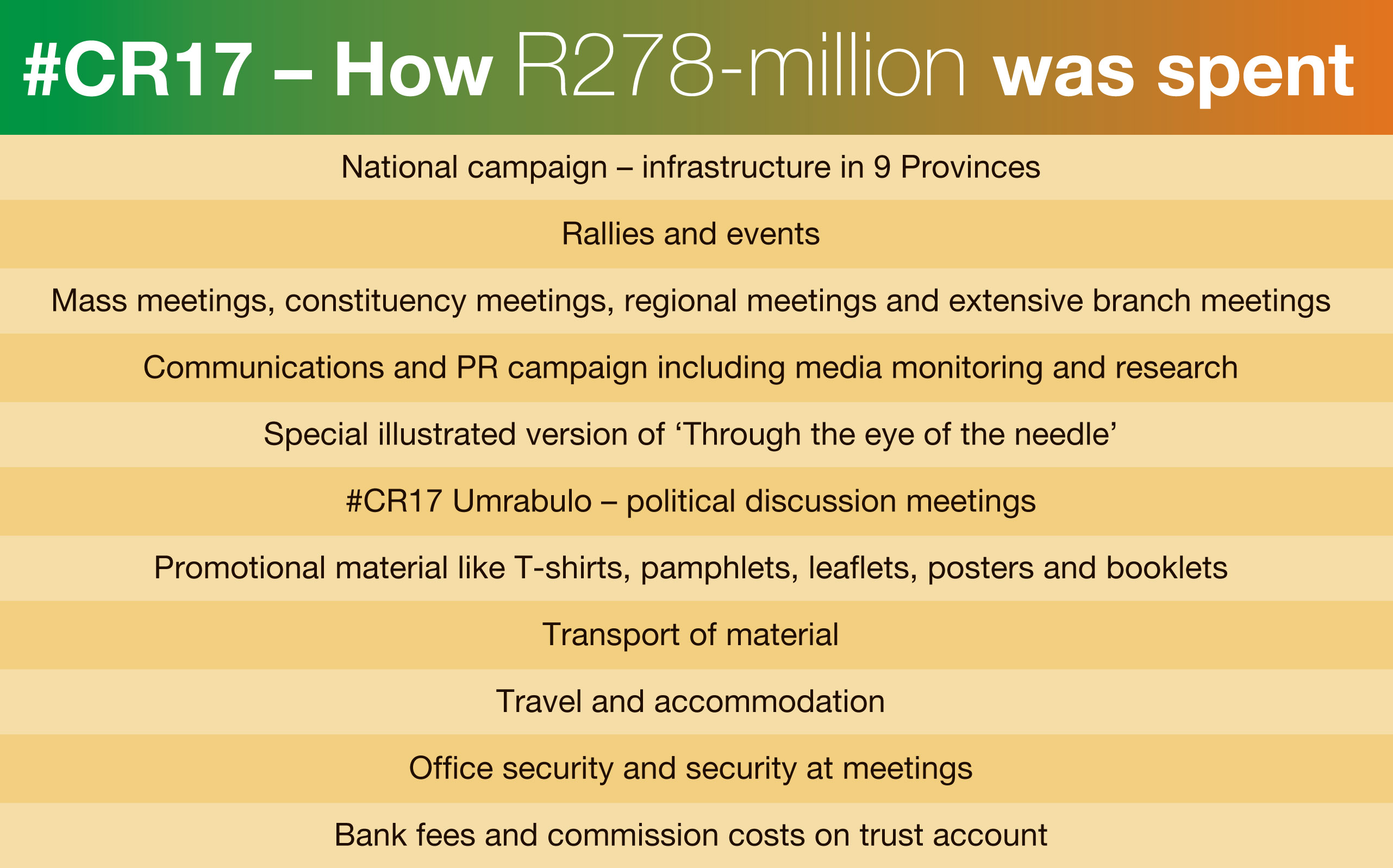 In July 2019, Public Protector Busisiwe Mkhwebane found that Ramaphosa had benefited personally from the campaign funding. Her remedial action was that National Assembly Speaker Thandi Modise should ensure that he declared the benefit in Parliament’s registry of interests; she also found that the funds might indicate money-laundering. Modise is taking legal advice and Ramaphosa has won an interdict against implementing Mkhwebane’s remedial action.

In the meantime, the president’s fundraising emails, as well as bank accounts related to the three accounts used by his campaign, are zinging across the internet and WhatsApp chat groups. The leaks have damaged his reputation, although the Presidency says the crisis is manufactured.

Mkhwebane inflated amounts received by the Ramaphosa campaign, the president alleged in his response to her. She did this by not calculating the interest accrued, by double-counting monies transferred across the three accounts and by including amounts that did not belong to the #CR17 campaign, but to Linkd Environmental Services, the consultancy that managed the money.

It’s still a fortune. Where did it go?

Over almost two years, campaigners interviewed say they spent the largest amounts on paying ANC membership (to ensure delegates’ R20 annual fees across the country were up to date); on communications (T-shirts, posters, other media, social media and agency fees for campaigns); on co-ordinators (52 regional and 12 provincial), on a campaign headquarters, security, legal fees (the campaign paid for various court cases across provinces such as KwaZulu-Natal and the Free State, which determined which delegates finally went to the Nasrec conference).

This amount is more than the R275-million claimed by the first official, whose calculation excluded Ramaphosa’s own loans and donations, with more money spent and raised.

Asked if there was corruption involved, the official who briefed Daily Maverick estimated a “20% slippage” which was calculated as money paid to campaigners who were “double or triple-dipping” that is, “selling” their support or votes to more than one candidate; or it is also calculated to money paid on inflated travel and other logistics costs. The amounts paid to two EFF MPs and which saw them resign last week is likely to be part of this slippage.

On Friday, the Mail&Guardian reported that late in the campaign businessman and longtime ANC campaigner Cheslyn Mostert was brought in to bolster the campaign. He requested a R10-million “slush fund” which was necessary to fund a last-minute drive because cadres were getting angry with a tight hold on money by the campaign’s headquarters. (Mostert owns Maverick State, the company that social media trolls surmised was Daily Maverick when the emails and bank accounts were first leaked and which revealed payments to his company.)

Often, these membership fees were outstanding by up to five years, all of which required a deep dig into the funds raised, largely from big business, but also from Ramaphosa himself. 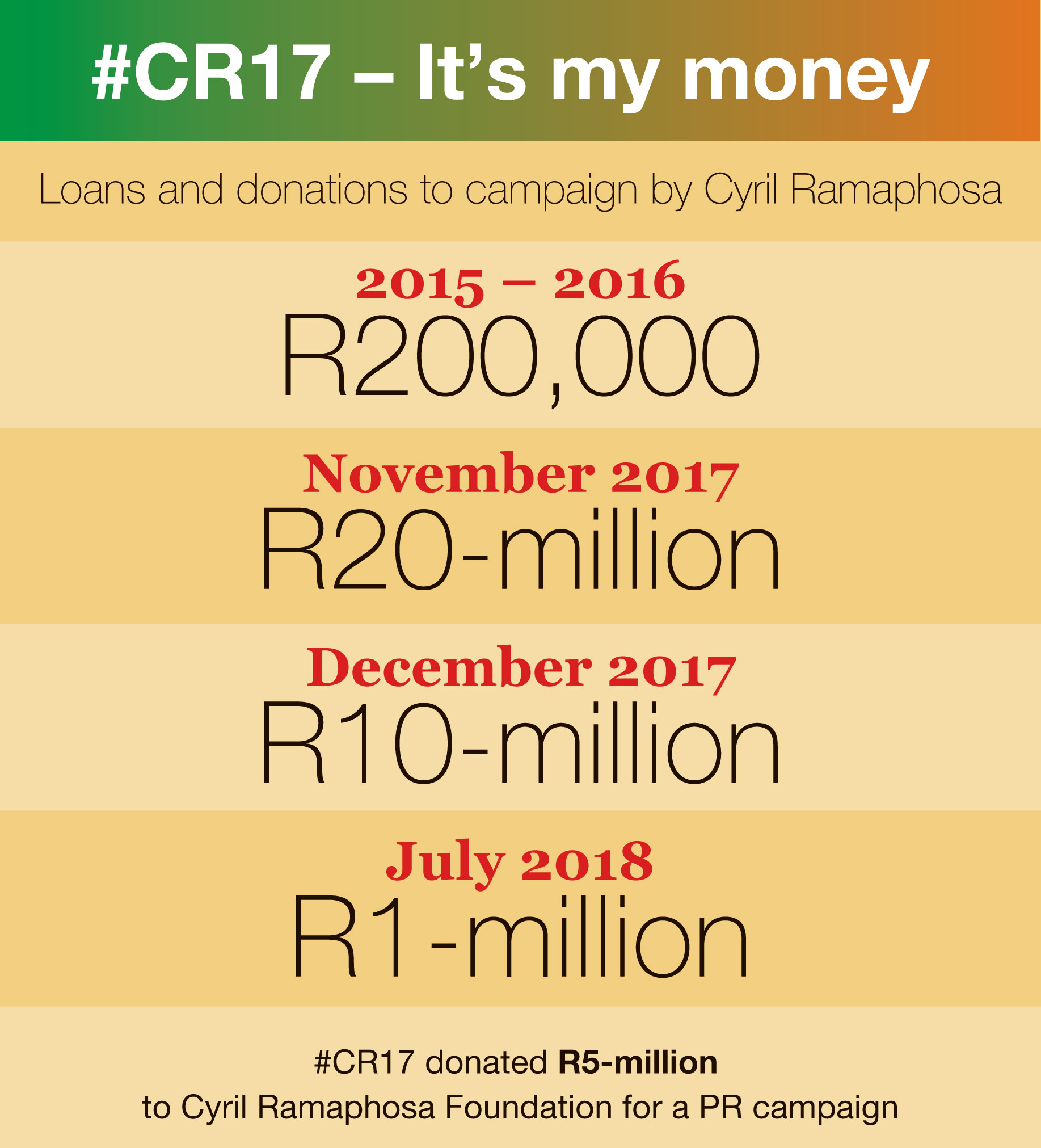 Asked if the days of members paying their own R20 annual membership fee as a sign of commitment to and membership of the ANC was over, the source laughed. This means that most ANC membership is sponsored by patrons.

The campaign’s infrastructure was expensive as Ramaphosa ran a full national campaign which can be equated to a US-style primary election campaign where party candidates vie to become the presidential candidate. It had a full-time campaign team headed by Benjani Chauke, a long-time activist and ally of Ramaphosa’s (he was not paid because he was on an official salary) and campaign co-ordinator Marion Sparg, who was paid R2.4-million (roughly R180,000 a month) because she quit her job as a senior executive at an advertising agency on what would be a short-term contract.

The head office cost R30-million to run over the period of the campaign and it is likely that individuals such as then ANC officials Fikile Mbalula, Zizi Kodwa and Enoch Godongwana were paid from this budget for taking leading political roles in the campaign.

Then, a similar amount was spent on 12 provincial co-ordinators and 52 regional co-ordinators. Because the campaign was a national one, it required ground troops across the country to build political support for Ramaphosa, whose years in business and out of politics meant that he had not kept alive a personal constituency in the way that a leader such as former President Jacob Zuma has always done.

‘No delegates were paid’

While ANC internal leadership contests have for years featured lots of money in cash, Ramaphosa’s team thought they were doing things differently.

“All payments were electronic; all expenses invoiced; and we checked if we got the output we had paid for. ‘Did the rally take place?’ and ‘Did the hotel get paid?” ” said the official who briefed the Daily Maverick. He added:

“It’s not an exact science, but we kept things as tight as possible.”

He said: “The reason people are shocked (at the half-billion-rand price tag) is this is the first time it’s being dragged into the light of day. ANC leadership contests are highly funded — these have become (like) American campaigns. It was the same at Polokwane, Mangaung (the two previous ANC elective national conferences). No internal political camp has ever had these (their funding) exposed. (There is) no benchmark against which to judge it. The campaign tried to set a benchmark for managing money responsibly.”

This and the high quantum raised has caused an uproar after it was leaked on social media and then picked up in the mass media, by the Sunday Independent and News24. This is because it is the first time the public understands how much it costs to become an ANC president or premier or mayor, but also because it revealed how lavishly the private sector funded an internal party race raising the spectre that a (or another) president can be bought.

Previous races for top ANC jobs were run with big cash, say activists who have managed campaigns. Last week, Minister of Co-operative and Local Government Nkosazana Dlamini Zuma said she would not reveal her funding. The absence of cash also explains why campaigns for the ANC presidency by Kgalema Motlanthe (in 2012), by Lindiwe Sisulu and Zweli Mkhize (in 2017) flopped, said a veteran campaigner.

Asked if delegates were paid to vote for Ramaphosa, the campaigner said:

“No delegates were paid,” but that the campaign had paid for all their accommodation, transport, food and evening engagements during the Nasrec conference.

“Unless you protect your delegates, other camps can use them in a way that is factional,” he explained. “You have to cloister them.”

While Ramaphosa’s spokesperson Khusela Diko has described the narrative of the leaks (of both the emails and the bank accounts) as a “manufactured crisis” playing out largely on social media, that may be an understatement.

The bank accounts were quickly leaked to ANC WhatsApp chat groups that are not aligned to Ramaphosa and are run by his opposing factions. This suggests that the narrative could grow into a political crisis by the time the party holds its mid-term assessment meeting (between conferences), the National General Council (NGC), in 2020.

Details of the funding of both Ramaphosa’s campaign to become ANC president as well as the funds received from Bosasa will be publicly aired when the review application of Mkhwebane’s report hits court later in 2019.

Then, it will move from a social media narrative into one likely to grip the nation and it could come to define his young presidency, which leading and sympathetic commentators believe to be struggling — look, for example, at the recent writing of Justice Malala, Barney Mthombothi and Ranjeni Munsamy, among others. One of the president’s leading supporters, the former deputy minister Mcebisi Jonas, has also said that reforms are taking too long to bed down.

And, Mkhwebane has set up a war with both Parliament (after she instructed the National Assembly Speaker Thandi Modise to insist that Ramaphosa declare his donors) and with the National Prosecuting Authority (she instructed that National Director of Public Prosecutions Shamila Batohi investigate Ramaphosa for suspected money laundering in relation to the donations).

This escalation to a crisis is likely to play out for the rest of 2019 and well into 2020, suggesting that Ramaphosa will go to the party’s NGC in a position of weakness and not of strength unless the chess pieces move substantially between now and then. DM