Did Des van Rooyen meet Gaddafi’s banker? And other mysteries… 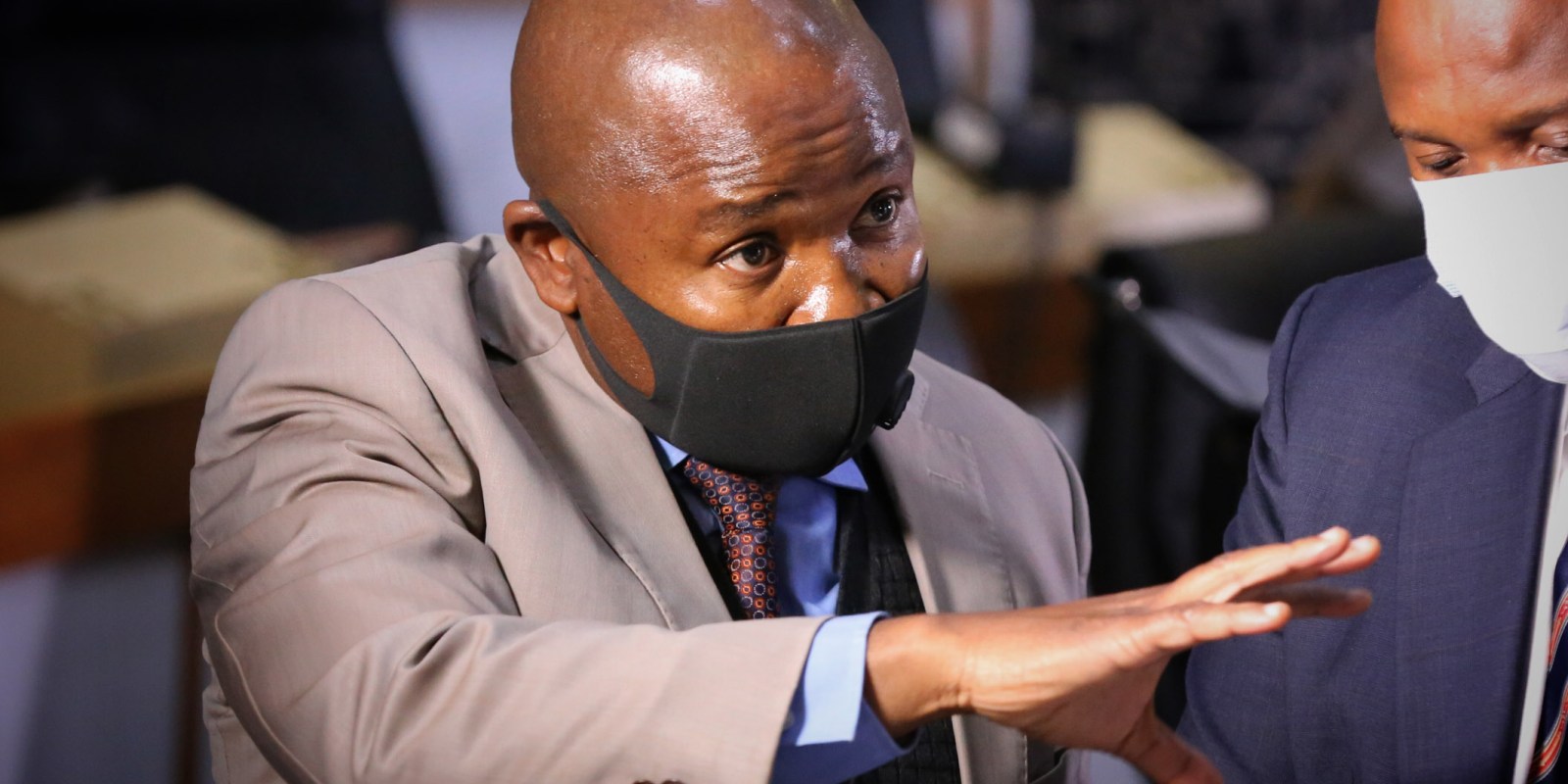 Former minister of finance Des van Rooyen fielded questions on his appointment of two advisers to National Treasury during his brief tenure in 2015. Van Rooyen, who has become closely associated with the 1983 Brenda Fassie hit ‘Weekend Special’ on account of his short shift as government’s Mr Moneybags, testified at the Zondo Commission on Tuesday. He disclosed two curious meetings at Melrose Arch around the time he was sworn into office in December 2015.

Former minister of finance Des van Rooyen claims he appointed two men he barely knew to key positions in the National Treasury in 2015 out of loyalty to the National Development Programme (NDP).

“We need a capacitated state,” said Van Rooyen. “So we can’t capacitate [the] state with cronies and friends. We need merit and that’s what made me take a decision on those two appointments.”

At the time, Bobat was associated with Regiments Capital and Whitley, said Van Rooyen, had recently left his previous job. Van Rooyen testified he met Bobat in person six years before at a restaurant in the North West.

Bobat reportedly provided Van Rooyen with a business card. In the intervening six years, they occasionally spoke over the phone, when Van Rooyen sought Bobat’s input on his studies, including an MSc in Finance.

Van Rooyen said Bobat presented himself as an expert on tax, and an accountant. “Definitely his knowledge was very evident,” said Van Rooyen.

“I’m going to trace this man because I really need him to come and join me,” said Van Rooyen of his thinking on Tuesday 8 December 2015. The same day he was hailed to the presidential residence, Mahlamba Ndlopfu.

Hulley asked Van Rooyen what he knew of Bobat by 2015. “I had never seen his CV. I knew his profile,” said Van Rooyen. “He was the only person you wanted for that job, is that correct?” asks Hulley. Van Rooyen said he was under “pressure” to submit a list of names of whom he wished to attend his swearing-in ceremony days later.

He continued, “Chair, I had no time because — remember — I had to hit the ground running. I had to prioritise some positions in my office.” Zondo asked:

“Why did you not want to give yourself a wider choice of people, qualified people, experienced people from whom to choose? Why did you confine yourself to this person whom you had only met once in six years or so?”

“I decided that he was the best candidate for that assignment.” Zondo replied, “It is a matter that concerns me.” Van Rooyen asserted Bobat was “ a man of integrity” who was fit for purpose and someone sufficiently knowledgeable to advise him.

Van Rooyen also disclosed two private meetings at Melrose Arch around the time of his ministerial appointment. On 10 December 2015, said Van Rooyen, he met the CEO of Trillian Capital Partners.

“That is when I started knowing Mr Eric Wood,” he said. The following day he was introduced to Whitley, after a breakfast meeting.

“I was hosted by a business person, Mr Bashir Saleh, who is a businessman from Libya,” said Van Rooyen of the private meeting in a boardroom at the upmarket Johannesburg address. Thereafter, said Van Rooyen, Malcolm Mabaso, an adviser to the then minister of mineral resources, Mosebenzi Zwane, introduced Whitley.

Mabaso “was aware that I might be in need of support in my office and there is a gentleman I might want to engage in my team. He then allowed Mr Whitley to meet with me”. Mabaso provided Whitley’s CV. Van Rooyen was “very much impressed” and determined in that brief interaction that “Mr Whitley has what it takes” to assume the position of Chief of Staff.

Later, Hulley sought to further question Van Rooyen on Saleh and how the two became acquainted (likely, in light of reports, a Libyan financier named Bashir Saleh, associated with Libyan leader Muammar Gaddafi and cited on an Interpol wanted list, who fled to South Africa). In this report for Daily Maverick, Saleh is described as Gaddafi’s former chief of staff, who headed a R400-billion sovereign wealth fund, wanted in Libya for fraud and the target of an Interpol arrest warrant.

“Where did you meet Mr Saleh previously?” Van Rooyen began referring to his role at the MKMVA:

“I got to know Mr Saleh […] they requested a meeting with our office.” His lawyer, advocate Thabani Masuku SC, soon interjected, raising a complaint about Hulley’s off-the-cuff reference to media reports.

“How will that help us looking into the issues that we are looking at here?” asked Zondo, before putting an end to Hulley’s line of questioning. In any case, Van Rooyen’s tenure in the National Treasury was over in a matter of days. Then president Jacob Zuma soon replaced him with now Minister of Public Enterprises, Pravin Gordhan. His brief tenure has, in popular culture, prompted associations between Van Rooyen and the 1983 Brenda Fassie hit, Weekend Special.

Van Rooyen testified at the State Capture Inquiry on the afternoon of Tuesday 11 August 2020. That morning, his counsel cross-examined former director-general of National Treasury, Lungisa Fuzile. Previously, in November 2018, Fuzile had testified about events at the Union Buildings prior to Van Rooyen’s swearing-in as minister of finance on Thursday 10 December 2015.

“Mr Bobat did not care about protocol or civilities. He appeared determined to assert his authority over me. He was not bothered that he was not an employee in the department and that his role had not been explained to me.”

Fuzile testified that Enoch Godongwana, then head of the ANC’s economic transformation committee, alerted him that he was set to receive a so-called Gupta minister at the National Treasury, accompanied by two advisers. So it was.

“I employed the principle of trust,” explained Van Rooyen. However, Zondo wondered aloud how Godongwana could have forecast these events, particularly when Van Rooyen testified he did not disclose his intention to appoint Bobat to anyone ahead of being sworn in on 10 December 2015.

The same month Fuzile testified at the inquiry, current Director-General of National Treasury, Dondo Mogajane, detailed the consequences of Zuma appointing Van Rooyen in 2015. “The rand was taking a beating,” he said.

“The narrative in the public was very negative, and I was worried that we were quiet as a National Treasury, the President was quiet,” said Mogajane, who further highlighted the controversial “Nuclear Deal” as a matter of priority at the time.

In her testimony, MacLeod illustrated the impact of “Nenegate” on the cost of national long-term debt: within 48 hours of Van Rooyen being sworn in at the Union Buildings, the rand plummeted from R14.59 against the US dollar to R15.90.

“Nenegate was a visible point in the State Capture project. The impact was long-lasting,” said MacLeod. As previously reported in Daily Maverick, MacLeod cited the yield of one bond, the R186, which shot up from 8.82 to 9.87 (a full percentage point higher).

Van Rooyen began his testimony with an opening address, in which he tackled the ills of White Monopoly Capital and the slow pace of economic transformation in post-democratic South Africa.

“Our struggle is not yet over,” said Van Rooyen.

In anticipation of allegations against him, he said:

“I never and will never sell my soul to the highest bidder for me to be elected to a leadership position.” Van Rooyen responded generally to Fuzile’s allegations, claiming Fuzile’s version was “a political lie” spurred by those resistant to change in the National Treasury.

Toward the end of the day, Van Rooyen took a swipe at Fuzile, who is now the CEO of Standard Bank. He claimed Fuzile was a beneficiary of a “revolving door phenomenon” at National Treasury. “Why did he decide to go and join a company?” he asked. Van Rooyen then advocated a wider scope for the State Capture Inquiry.

Van Rooyen disclosed his first (and, he said, only meeting with Rajesh “Tony” Gupta) some two months prior to his appointment as minister of finance. When testifying in October 2019, Duduzane Zuma proudly said of the youngest Gupta brother, “That’s my guy.” Proceedings resume on Wednesday 12 August 2020 at 10am. Evidence on the Passenger Rail Service of South Africa (Prasa) is anticipated. DM