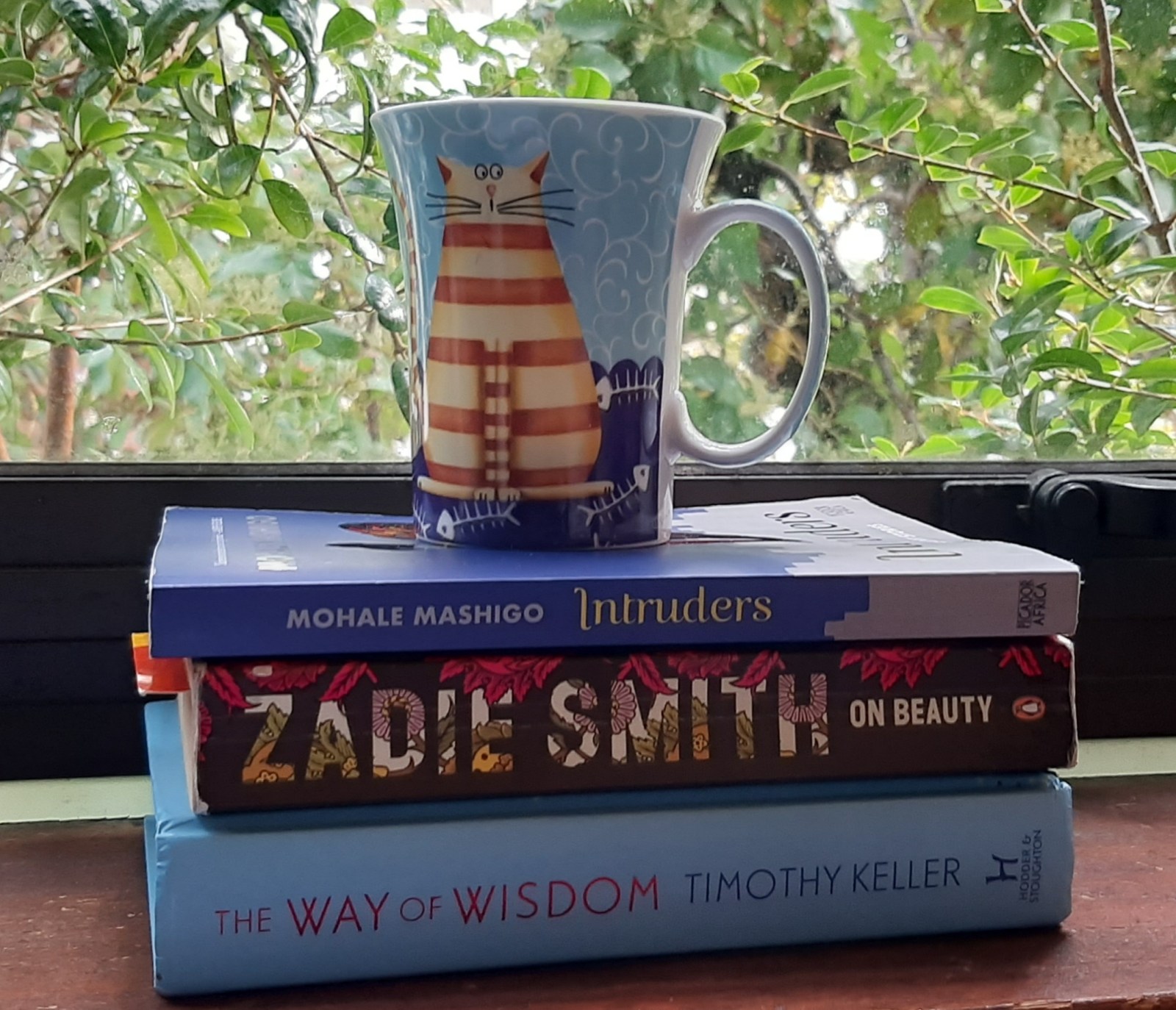 Cats and books have been my saving grace in the past week. 6 August 2020. Photo: Sandisiwe Shoba

South Africa went into a hard lockdown on Friday 27 March in hope of blocking the spread of Covid-19. The lockdown was extended, then the country started slowly opening up. Currently, at Level 3 of lockdown, coronavirus cases have spiked, correlating with South Africans’ dwindling appetite for following regulations. These reflections are part of a weekly series that monitors stay-at-home life in various neighbourhoods.

Rondebosch, Cape Town: Cats and books have been my saving grace in the past week. It was quite sombre in my apartment for a while after my flatmate’s elderly pet passed away (RIP Paws). Since then we’ve been considering fostering a kitten while we work from home. In the meantime, two fat and fluffy neighbourhood cats have been paying us visits. One we’ve nicknamed Chonk because of his sizable belly and adorable waddle. The other has a collar, on which is written “Pascal”. One of them often pops up randomly at our front gate or on the balcony — as cats do. Depending on the day (and my budget) I’ll let them in and crack open a can of tuna. It’s satisfying watching them munch away, although with Chonk I feel a tinge of guilt since I’m likely enabling a food addiction.

When I’m not staring out of the window, waiting longingly for the cats to visit, I spend some of my quiet moments catching up on some reading. I’ve recently finished a series of short stories by Mohale Mashigo called Intruders. I love one of the comments written in the opening pages: “…Thank goddesses, God, ancestral realm for this novel and the wonder of a woman who wrote it. I’m a little scared of her brain now TBH.” I share her sentiment. This wonderfully wild and absurd range of stories delves into the concept of Afrofuturism with a sense of effortless imagination. It’s helped me escape from the anxiety induced by the pandemic and find comfort in unexpected scenarios and characters like orphaned monster-killers from Bloemfontein and mind-reading geneticists. I can’t wait to read more of her work, hopefully curled up in a blanket with one of my kidnapped cats. — Sandisiwe Shoba

Mowbray, Cape Town: August is the month I dread the most. It’s Women’s Month, so companies and people who don’t care about women’s rights throughout the year often put out ill-conceived campaigns for the month.

It’s already started with Larry, a club promoter, who was accused of being physically abusive last year, being on an anti-gender-based violence campaign. Larry claims he’s a “reformed” abuser. I’m not sure what kind of work Larry has done to reflect on his violence but what I do know is that it seems convenient that during Women’s Month, people suddenly and momentarily care about women’s rights.

I’m tired of men who pretend to care about women when they treat the women in their lives terribly. Or when people have something insightful to say about violence against women because it makes them seem progressive.

Well, I’m not saying men can’t change their abusive ways. Of course, they can. In a YouTube video, Tumelo Mabena spoke about joining Brothers for Life and espousing a different kind of masculinity. He said he can’t completely say he has reformed but he is actively working towards not being violent. It’s a constant journey and not one that happens overnight (or when you want to be the poster child for anti-GBV campaigns).

Tumelo’s work involves speaking to other men about violence every day, not just when it makes for a cute, short-lived campaign during women’s month. That’s part of what it means to take women’s rights seriously. — Karabo Mafolo

Waiting for football to begin, at long last

Johannesburg South, Gauteng: I am one of millions of South Africans waiting with bated breath for South African soccer to resume this weekend.

As Premier Soccer League (PSL) chairman Irvin Khoza noted when he announced the return, live action will help people’s mental health as they continue to navigate the arduous path to a life post-Covid-19.

A number of interesting storylines are ready to play themselves out as the season resumes after almost five months. Will Kaizer Chiefs be able to maintain their number one position? Or will second-placed Mamelodi Sundowns leapfrog them to defend the title they won last season? Who will finish in the top eight? Who will be relegated and who will win promotion?

These are the questions that will be answered over the next five weeks. And, for 90 minutes at a time, the “little” issue of the country gradually being brought to its knees by corrupt government officials will be pushed to the back of our minds.

Who knows, the fighting spirit shown on the football pitch might ignite a burning desire in South Africans to take back power from a government that continues to foul them with no referee to dish out red cards? — Yanga Sibembe

Oranjezicht, Cape Town: This week I have the slow-burn patience of Deputy Chief Justice Raymond Zondo when he has to ask the same question four times.

I’ve asked myself: What does it take for a political party to not be anti-poor, especially during a pandemic? ANC members are alleged to have received tenders for personal protective equipment. The DA-led City of Cape Town has been evicting people all over the Mother City. The EFF calls for a permanent ban on alcohol when so many people within the alcohol industry would be negatively affected. The smaller parties are each niched within specific areas that I am not sure how they’d make a difference.

Political parties are extremely anti-poor — whether through policy decisions or not implementing progressive policies. Then there is the cruelty they put citizens through — evictions, lack of small business support, non-delivery of basic human rights such as dignity, housing and sanitation. Political parties have failed to take care of the needs of the poor, the vulnerable and those who need support from government.

I saw a tweet from eNCA reporter Heidi Giokos about small-scale tobacco farmers who have been negatively affected by the smoking ban and it makes me wonder what the government is doing to support them? Where are the opposition parties challenging this decision to endanger the livelihoods of tobacco and alcohol industry workers? Oh, yes, they’re too busy telling national government they need a haircut or the alcohol ban should be permanent.

This week, I ask myself, what does it take for government, political parties and advisory councils to not be anti-poor? –  Suné Payne