ANC and the criminal justice system fail to secure full accountability in 24 of 25 mega scandals.

I breathed a sigh of relief when President Cyril Ramaphosa wrote his weekly letter to the nation calling out the hyenas feeding on Covid-19 relief and promising to skin them using a “fusion centre” of nine anti-graft agencies.

‘They’d better watch their arses now,” I thought in reference to the civil servants, children and other extended families of politicians gorging at the trough of Covid-19 relief funds.

Then, upon reflection and even after I tried to cajole myself out of the instinct to cynicism which so corrodes the heart, I realised that this sense of relief is not justified.

The newsletter was really only words, though, to soothe a public getting increasingly jagged-edged about Ramaphosa’s ability to deliver on the reform and era of integrity he has repeatedly promised.

Take a look at the chart of historical ANC scandals which I keep.

Despite Ramaphosa promising an era of clean government and an end to corruption, in fact, three major scandals including the chowing of Covid-19 relief money have emerged under him. And his administration has failed to secure a single act of substantive justice against corruption, except for a single appearance in court by VBS executives who are now out on low bail amounts. And the governing ANC has returned two Limpopo leaders in the middle of the scandal to their positions, as Pauli van Wyk detailed here.

Eating public health money has touched a public nerve, but so should the allegations against the chief water adviser Thami ka Plaatjie, because it reveals how water tanker contract corruption has also recently emerged. Water provision is a key part of Covid-19 relief because without water you can’t wash your hands or run clinics and hospitals. 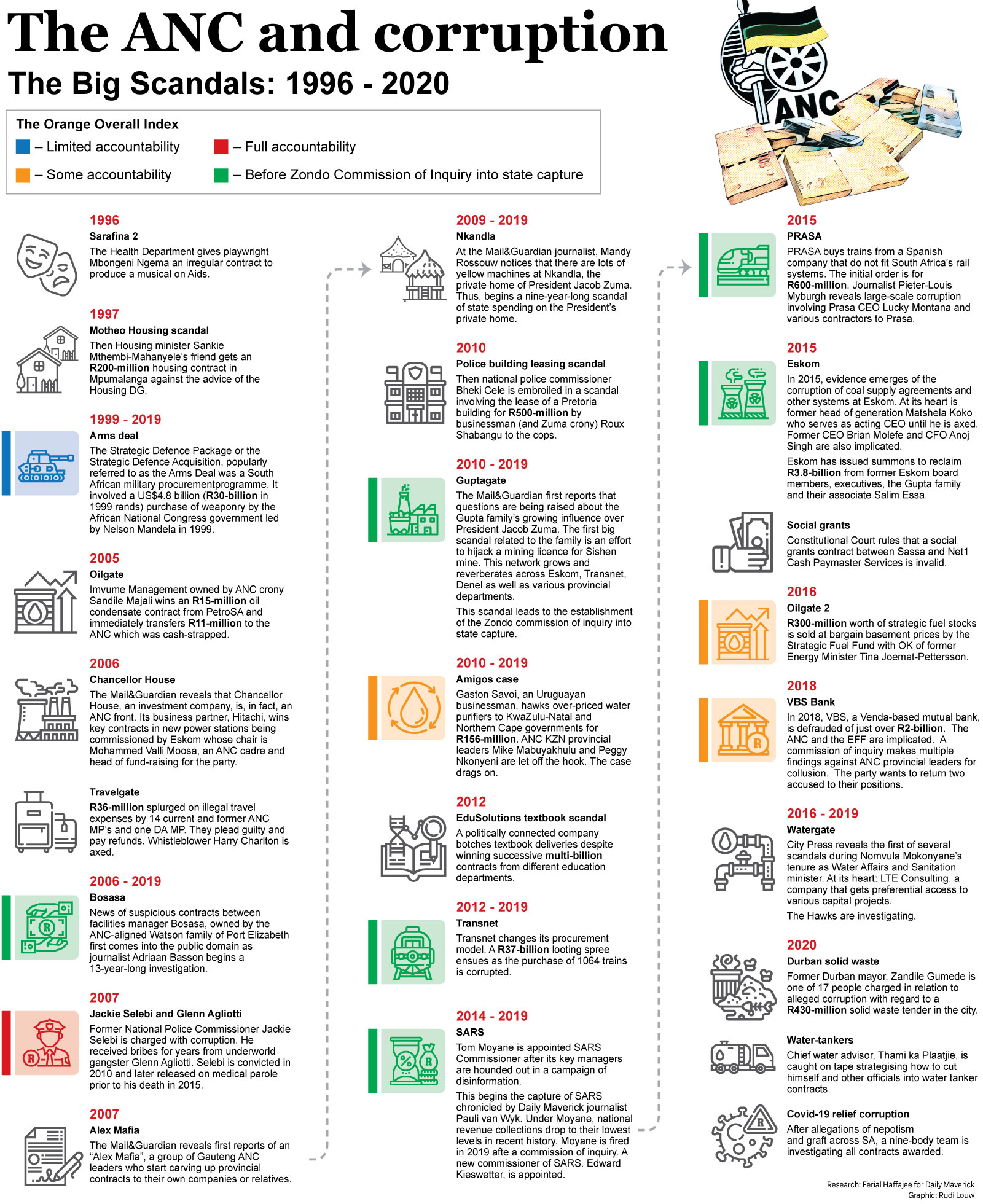 Daily Maverick’s running tally of major ANC-linked scandals is at 25 and when you apply what I call an “Orange Overalls Index” over that to assess whether there has been accountability, the picture is bleak.

In only one case can you assess for justice and full accountability and that is in the bribery case between businessman Glenn Agliotti and the late and former national police commissioner Jackie Selebi. In three other cases – Oilgate 2 (the illegal sale of the country’s oil reserves), the Amigos case (the purchase of water purifiers from Uruguayan businessman Gaston Savoi) and in VBS bank, there has been partial accountability.

Thanks to OUTA’s legal action, the reserves have not changed tanks although the money has; Savoi is out on bail while charges have been dropped against his political interlocutors in KwaZulu-Natal; and in the VBS case, charges have been laid.  But progress in this case is sullied by the ANC’s kak-handed decision to return Limpopo leaders Danny Msiza and Florence Radzilani to their jobs because the justice system is taking too long to charge them.

In the scandals marked in green, you can see how these six cases have all been aired at the Zondo Commission of Inquiry into State Capture.  The airing itself may have a cautionary effect of stamping out patronage networks across these state-owned enterprises and agencies like the SA Revenue Service, each of which also has new leadership in place.

These six cases as well as the news that Eskom and the Special Investigating Unit (SIU) is going after former executives, board members and the Gupta network to reclaim R3.8-billion in misused funds does give hope for reform.  But in aggregate, the big picture is that in only one of the 25 scandals that has ripped out of the heart of the ANC, has there been significant justice.

The Zondo commission is only slated to complete its inquiry next year and the journey from there to prosecutions is a long road.

Last week, Ramaphosa passed amendments to the commission’s regulations which will have some impact on the Orange Overalls Index as Pierre de Vos explained.  Ultimately, though, what is clear after 25 major scandals (we’ve excluded scores of smaller ones) in 26 years, winning the fight against corruption does not lie with Ramaphosa but with the people whom it affects. DM