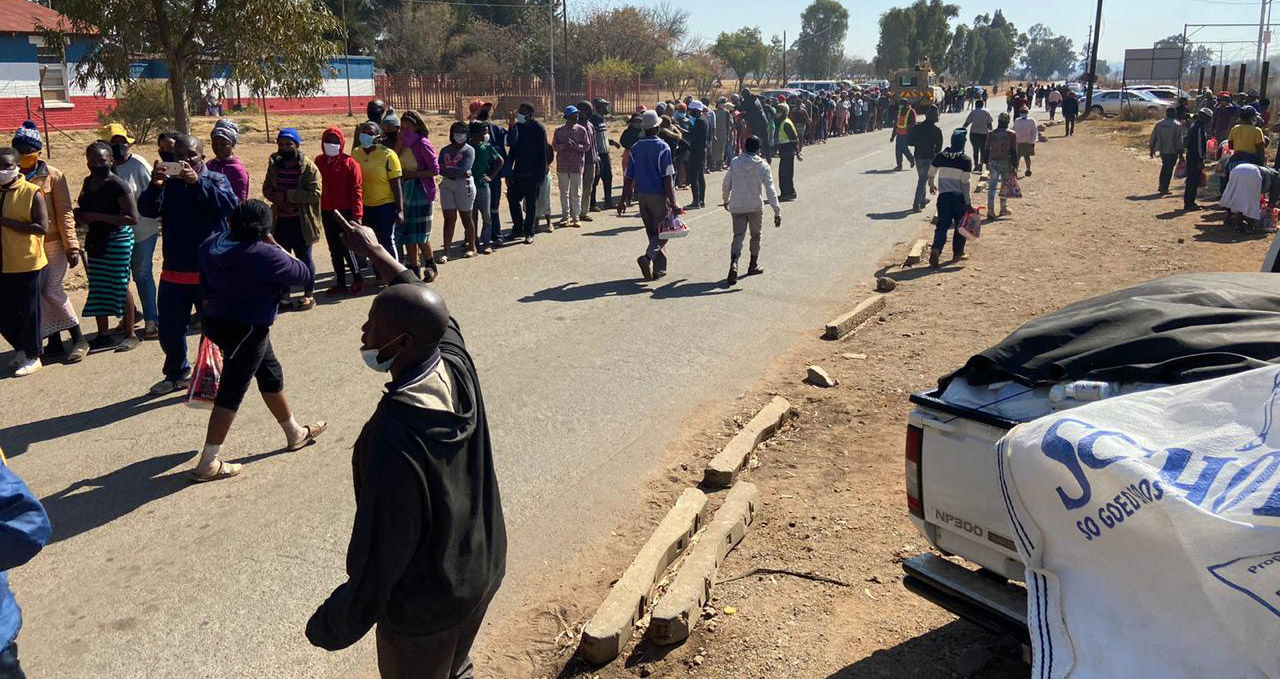 Waterworks residents trailed the bakkies loaded with food parcels all the way from the Informal Settlement to the Lenasia Army Base on Friday 31 July 2020 during a food donation by the Seriti Institute. (Photo: Bheki Simelane)

In the wake of the story of the Lesotho national who allegedly died of hunger in Waterworks in July 2020, the community has received an outpouring of sympathy and support in the form of hundreds of food parcels, masks and sanitary towels. However, the need is still greater than the available help.

The handing out of much-needed food to destitute residents of Waterworks near Lenasia in Johannesburg had to be moved to a nearby army base to prevent chaos erupting on Friday, 31 July 2020.

In the wake of Daily Maverick’s story on 29 July which reported on a Lesotho national who allegedly died from starvation, Seriti Institute CEO Juanita Pardesi delivered more than 600 food parcels, which included masks, sanitary towels and vitamins to desperate residents.

The institute had relied on community leaders to draw up a list of residents in need, but as soon as two bakkies laden with supplies arrived in the area, they were surrounded by throngs of starving residents.

Residents claimed the list contained names of those close to the leaders rather than those who most needed the aid. An attempt to form an orderly queue was abandoned when some residents failed to adhere to the instructions with some threatening violence if they did not receive parcels.

A decision was eventually taken to move the hand-out to an army base in Lenasia, which was just 1km away from the informal settlement.

Initially reluctant to assist, Pardesi and her team managed to convince South African National Defence Force (SANDF) personnel to allow them to park outside the base to do the handout.

“We cannot take the food back, the community needs it. All we ask is that you allow us to park by the side of the road and give out the food parcels. The community will be orderly in your presence, please,” Pardesi pleaded.

After much debate, the request was granted under strict instructions. Meanwhile, the community members who had trailed the bakkies had already formed a very long queue for parcels. They formed a packed queue a few metres from the entrance to the army base with no physical distancing being adhered to.

Being in Lenasia also meant that people from other areas arrived to try to receive some of the parcels.

“I came to Lenasia to look for work and as I was leaving, I noticed many people coming from this direction with food parcels and I immediately thought of my starving kids at home,” said Sindi Mlangeni from Orange Farm.

The food relief came as a result of the efforts of the Seriti Institute and Maverick Citizen editor Mark Heywood.

The Seriti Institute is a development facilitation agency that works to develop marginalised communities. After Covid-19 struck in South Africa, the organisation said it saw that the most pressing need was for food relief and for alternative food provisioning systems.

“People are hungry and as a development facilitation agent, we realised that no development could take place when the minimum basics of staying alive have not been met,” said Pardesi.

“We thank our donor, the Social Justice Initiative and the support from Standard Bank, Meal SA and Ascendis Health for their in-kind donations of food, masks, gloves and multivitamins. We still have thousands of hungry families and households to feed, and each contribution counts,” Pardesi said.

According to Pardesi, since the start of the lockdown, Seriti’s community response had provided food relief for over 7,000 people in the North West, Limpopo and Mpumalanga provinces.

“Through our joint efforts with the C19 People’s Coalition community organising and food working groups, we facilitated the delivery of over 18,000 parcels in Gauteng,” she said. DM

The Seriti Institute can be reached for donations on their website.