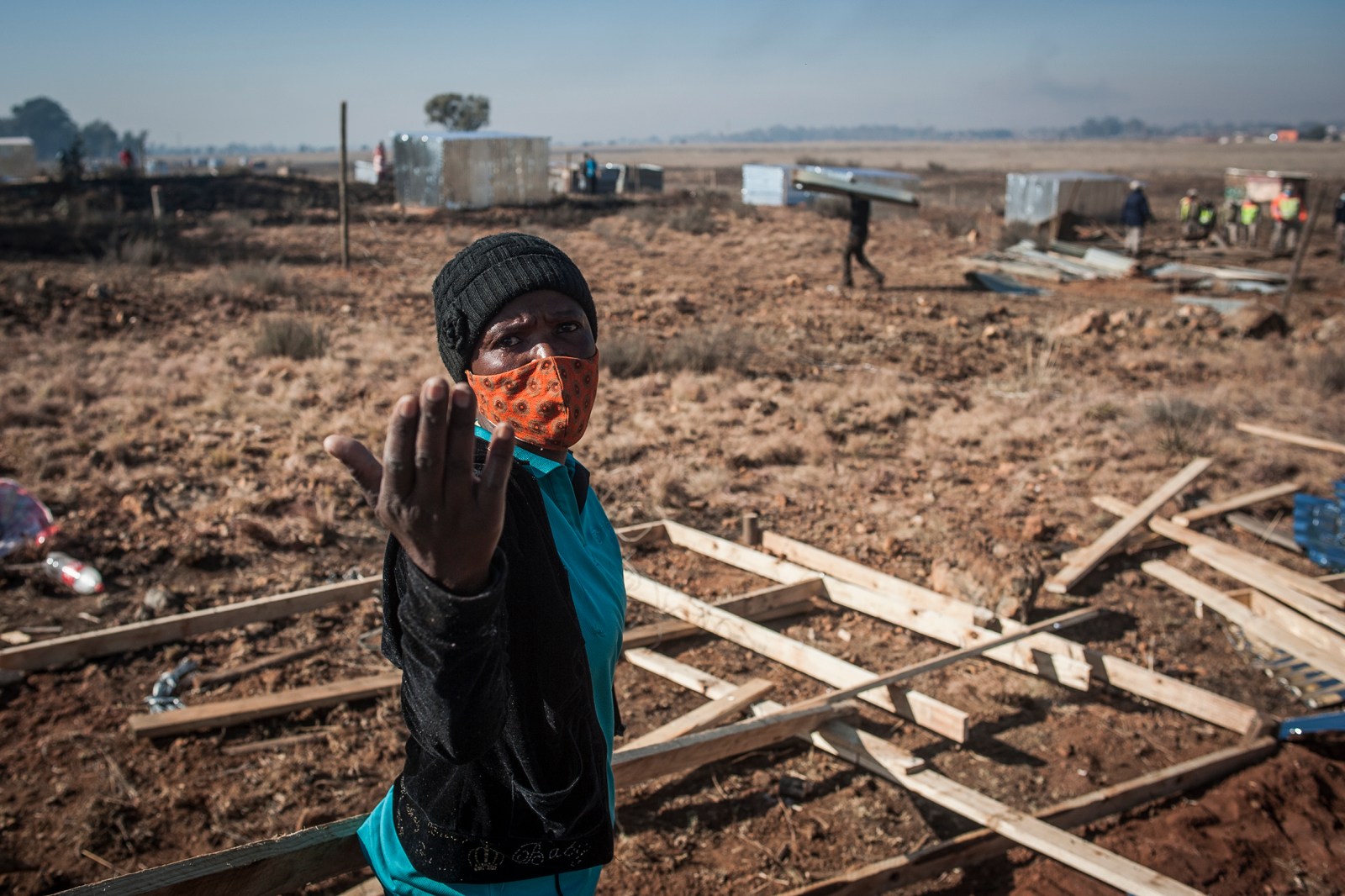 Francina (last name unknown) stands beside the remains of her demolished shack. The shack cost her R2,800 to set up. She took a year to save the money. (Photo: Shiraaz Mohamed)

Residents in an informal settlement in the south of Johannesburg have gone to court to challenge their recent eviction, which they say was illegal and left them homeless and destitute in the midst of the coronavirus pandemic.

Residents of the Nana’s Farm informal settlement in Klipriviersoog, which sits between Eldorado Park and Lenasia in Johannesburg’s south, have gone to the South Gauteng High Court to challenge their recent eviction and demolition of their shacks.

In an application against the City of Johannesburg, SAPS, JMPD and SANDF, heard on 24 July 2020, residents argued that the city did not have a court order when it evicted an estimated 300 families and demolished their shacks on 18 and 19 July, rendering them homeless during the health and economic crises caused by Covid-19.

Grace Chauke, the first applicant who admitted she and others have illegally occupied the vacant land from as far back as 1990, said the city had ignored State of Disaster regulations and directives from Human Settlements, Water and Sanitation Minister Lindiwe Sisulu when it evicted many residents in the area without a court order.

Residents want compensation from the City and for the court to provide an interdict to prevent further evictions. They also want the evictions declared unlawful and a violation of their constitutional rights to dignity and security.

“The Applicants at the draft of this application remain homeless and destitute, making them prone to elements of danger and most especially the Covid-19,” said Chauke in her affidavit to the court.

Chauke, represented by Lawyers for Black People SA, which were referred to the community by an EFF member, said the City had acted like a law unto itself by evicting residents without a court order, and committed a “gross violation of the law and regulations put in place during the lockdown”.

She said city officials arrived in the area on the evening of 18 July with JMPD, SAPS and SANDF members, and started removing belongings from households without explanation.

“When the Applicants tried to understand what was going on, members of the [SAPS and JMPD] threatened to shoot and beat up those who would attempt to prevent them from doing their work,” she told the court.

“The conduct of the [City of Johannesburg] who authorised the unlawful act is tantamount to no regard of the law at all.”

In her court papers, she mentioned another woman who she said was given five minutes by the authorities to leave her shack before it was demolished. She and the woman and her husband are unemployed and now homeless with a two-month-old baby.

A number of municipalities across the country have continued to evict residents during the pandemic, leading Sisulu to warn that evictions are prohibited under lockdown regulations.

However, she has also said new land occupations, which are reported to have increased, are also against the law and authorities should go to court if they want to evict residents.

“Invasion of land is illegal. But at the same time, once somebody is in a house that has been put up, the law enforcement agencies are required to approach the courts to get permission to do something about that,” Sisulu told the National Council of Provinces earlier in July.

They say they are now more at risk of contracting and spreading Covid-19.

“The President of the Republic ordered that everyone stays at home during the lockdown… what home is then left for the Applicants if the same government can destroy them,” said Chauke.

The City of Johannesburg has argued that the demolitions were lawful as they only targeted shacks built recently.

Johannesburg Mayor Geoff Makhubo visited the area after residents protested against the evictions.

“Whoever has been here for the longest of time is allowed to stay here. We need to do an impromptu inspection. We can tell if a shack was built yesterday. We were not born yesterday. We can tell these things. We are not going to allow any more growth. Any new shacks will be dealt with,” he said.

The Western Cape High Court recently ruled that the City of Cape Town acted unlawfully when it evicted and demolished the property of a Hangberg resident who illegally occupied land and built a house during the lockdown.

In that case, Judge Gayaat Salie-Hlophe said “in the absence of an eviction order, and with that an order expressly stating that it is just and equitable to do so, demolitions of homes cannot be carried out lawfully at present, during alert Levels 3 and 4”.

Meanwhile, lawyers for Nana’s Farm residents as well as the Johannesburg municipality were conducting an audit on Monday of which shacks were demolished in the area, as photos submitted to the court showed that a number of shacks were still standing.

The case is likely to continue on Thursday, said Zuko Madikane from Lawyers for Black People SA. DM