Consumer co-operatives: Solve the food crisis by bringing farmers and communities closer together 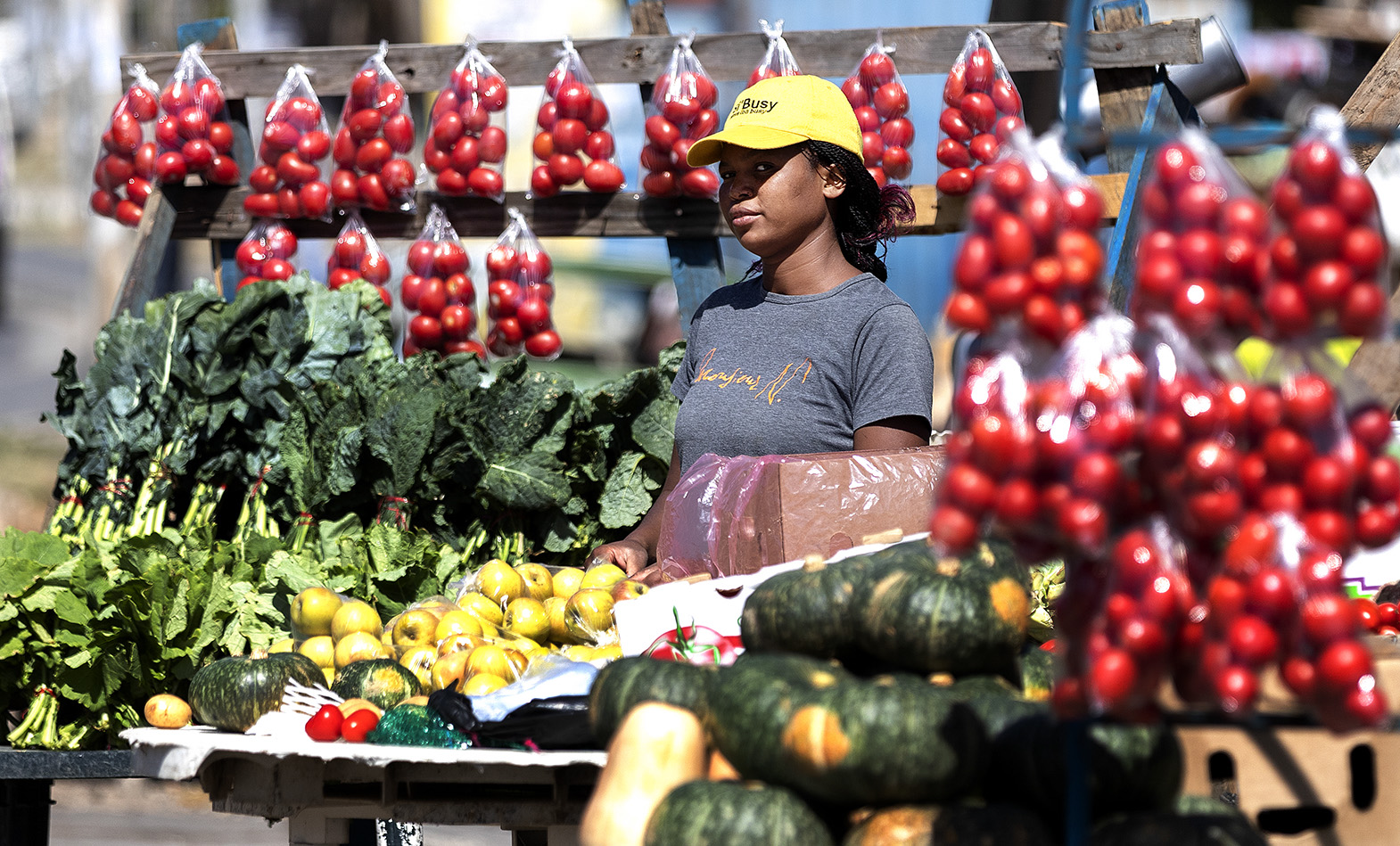 A ‘just recovery’ from the Covid-19 crisis requires that we think beyond food relief, and make changes to our food system now,say the writers. (Photo: EPA-EFE / Nic Bothma)

From the start of the Covid-19 lockdown in March, small-scale farmers reported excess food that they could not sell due to a loss of markets. At the same time, people in their communities were increasingly desperate for food, having lost their jobs. This created an unusual situation where poor people with surplus food were living in close proximity to other poor people who had no food.

Everyone who buys food can influence how it is produced and who benefits. Individually, we may all think that we have little, or no, choice. But collectively, we can reshape our food system into one that fosters well-being, health and equity.

The horrendous scale of the food crisis in South Africa should galvanise us all into action. The latest research shows that almost half of the country’s population went hungry in April, with 47% of households running out of food. That was in the first month of lockdown, and was already a significant deterioration from the pre-Covid-19 ‘normal’, in which hunger was already pervasive, and almost a third of children under five were stunted.

The Covid-19 crisis is not likely to end any time soon. Its aftershocks – unemployment above 50%, global recession and a fiscal crisis – even before the climate emergency, will make this worse. In the face of all this, even with an uncaring government, we are not helpless.

Mounting evidence points to the importance of restructuring our food system into one which is more democratic and equitable, delivering better health and economic outcomes. One way to achieve this is through consumer co-operatives, as we argued in a recent webinar. Consumer co-operatives forge direct economic relations between producers and consumers, and harness collective purchasing powers.

South Africa’s food system is highly concentrated, with a handful of large, vertically integrated food processors and supermarket conglomerates which dominate the market and use their gatekeeping powers to squeeze both consumers and producers. The resulting outcomes include unaffordable food prices (that bear little correlation to input costs), declining farm incomes and insurmountable entry barriers to small enterprises.

While the extremities of this configuration may be unique to South Africa, its basic outlines are not. Food markets across both the global North and South have been characterised by similar trends. In response, communities across the US, Europe, Asia and elsewhere have established alternative provisioning networks that collaborate with farmers to establish economically viable businesses, distribute proceeds fairly and improve health and quality outcomes. In doing so, they transform the very fabric of society.

In the food system in particular, consumer co-operatives have used their leverage to shape market arrangements that are more conducive to nutritional security, fair labour practices and broad economic participation.

International examples provide a broad array of approaches. While each is uniquely suited to its context, all hinge on forging relationships between consumers and producers through direct transactions, self-distribution and co-production – collectively agreeing on production targets, negotiating production methods, and even harvest work parties where all contribute labour.

The notion of consumer co-operatives emerged most significantly in Japan in the 1970s amid concerns about the health impacts and social and ecological sustainability of a globalised industrial food system. City-dwellers began organising to enter into agreements with family farmers, saying, “We want you to grow our food.” The resulting ‘Teikei’ (“partnership”) movement is constituted by thousands of autonomous co-partnerships, each determining the production targets, methods and prices suitable for their needs.

Similarly, in France, federation Nature et Progres has since 1972 brought together local consumer groups who wish to directly support and provide a secure market for local producers – not only farmers, but also cheesemakers, winemakers and bakers. The principle is the same: short supply chains, organised partnerships between consumers and producers, a culture of joint responsibility for food, and direct relationships.

Get the model right, and you have the foundations to go to scale.

In South Korea, the Hansalim Federation brings together over 2,000 family farmers in a producer co-operative that is federated with a consumer co-operative of over 560,000 households committed to buying reasonably priced food from the farmers. Its slogan says it all:

Together, the producers and consumers own packsheds, processing units and shops, and co-manage sales and distribution. It’s big business: they turn over $421-million per annum. And get this: 76% of the retail price goes to the farmer. This is the power of consumer co-operatives: benefiting both farmers and consumers.

Although many consumer co-operatives are focused on producing high-quality organic foods, this does not mean that they need to be elite preserves. Those operating in highly unequal societies like ours have made solidarity economy models part and parcel of healthier food networks, and are as concerned with affordability and labour standards as they are with nutritional outcomes.

In Canada, Toronto’s certified organic Black Creek Community Farm makes use of a payment model that allows for cross-subsidisation between higher and lower-income consumers. The Harvest Share Programme offers members sliding scale pricing which pays in advance for a full season of farm-grown produce. Every member gets the same amount and quality of vegetables every week, regardless of the fee paid. Those who cannot ‘pay forward’ can still purchase affordable organic vegetables.

The model provides some certainty of a guaranteed market for the farming community; it builds social solidarity and social investment; it means that consumers share risk with producers; it gets middle-class households to provide cash upfront and to cross-subsidise poorer households that cannot do so, and still delivers quality and affordable vegetables.

Brazil’s Ecovida Agroecology Network, an association of organic family farms, runs regional centres that act as exchange, distribution and retail points for other members’ produce. These have their prices regularly assessed to ensure fairness to producers and affordability to consumers. Alongside rotating street markets and direct links with consumers who can be relied on to provide markets, these strategies have worked to decentralise the food system and shape fairer terms of exchange.

Similar short food supply chains that could provide for changed power relations, solidarity and just outcomes are yet to emerge at scale in South Africa. Although numerous farmers’ markets exist, they are typically either elite markets for the rich or periodic informal markets where small-scale farmers sell at social grant payout points.

Although boosted by the Covid-19 crisis, a handful of box schemes that link small farmers to suburban households remain limited in their reach. We do not yet have organised groups of consumers buying into relationships with local small-scale farmers, and re-localising food systems. The self-organised solidarity networks spurred by the Covid-19 crisis show us that there are untapped opportunities to do so.

From the start of the lockdown in March, small-scale farmers reported excess food that they could not sell due to loss of markets. At the same time, people in their communities were increasingly desperate for food, having lost income. The contradiction was this: poor people with surplus food, and poor people without food, often in close proximity to one another.

Tapping into local donations, the Ubuntu Project in Gauteng opened exchange networks between the two, purchasing small farmers’ surplus and channelling it to households in need – along with seed and compost, so that those receiving food could also start their own backyard gardens. The purpose was not simply increasing food production, but inspiring and establishing new connections, with people teaching one another about food production and opening up community conversations about how to build resilience.

Inspiring others to undertake similar initiatives, the Ubuntu project has prompted a detailed, countrywide mapping of small-scale producers and distributors – information not compiled by the state as its official agricultural census excludes small-scale farmers.

The mapping is underway in Gauteng and KwaZulu-Natal, organised through the C19 People’s Coalition. It will be invaluable for understanding how to connect producers to alternative networks. Finally, the crisis has also given us the Community Action Networks (CANs), an extraordinary flowering of social solidarity. Their impetus should not be lost.

All CANs can convert into longer-term networks beyond the immediate Covid-19 crisis to organise people into food-buying groups that can, wherever feasible, support small-scale producers and leverage the partnerships forged between lower and higher-income neighbourhoods.

As we move forward to consolidate such opportunities, international examples offer some lessons:

Above all, in moving forward, we need to recognise that a more resilient and just food system will require restoring the commons – provide broad and democratic access to land for both small-scale production as well as larger-scale land reform and the redistribution of water rights.

It would require measures to limit corporate concentration and market power throughout all value chains – the kind of market power that underpinned the bread cartel saga.

It would require limiting profiteering off basic foodstuffs, through price controls, VAT zero-rating and subsidies on a basic food basket. And alongside all these, it requires building diversified local markets, short value chains, with few intermediaries, if any, so as to forge more direct connections between producers and consumers.

Our food system is in crisis, producing chronic hunger despite national food security.

A “just recovery” from the Covid-19 crisis requires that we think beyond food relief, and make changes to our food system now. Those who are most vulnerable are often those who are producing food – including the farmworkers and the small-scale farmers. Spikes in food prices in the supermarkets are at the cost of the poor – both as producers and as consumers. This need not be the case.

Covid-19 shows in sharp relief how markets fail. Markets are social institutions. We build them, and we can change them. Let’s start now. DM/MC

Dorah Marema is the founder of GenderCC Southern Africa-Women for Climate Justice and the Ubuntu Project.

Ama Deawuo is director of Black Creek Community Farm and a member of the Toronto Food Policy Council in Canada.

Konrad Hauptfleisch is a South African with the International Federation of Organic Movements in Germany.

Keren Ben-Zeev is with the Heinrich Boell Stiftung.

Ruth Hall is at the Institute for Poverty, Land and Agrarian Studies (PLAAS) at the University of the Western Cape.

Dorah, Keren and Ruth are part of the C19 People’s Coalition and its Food Working Group.