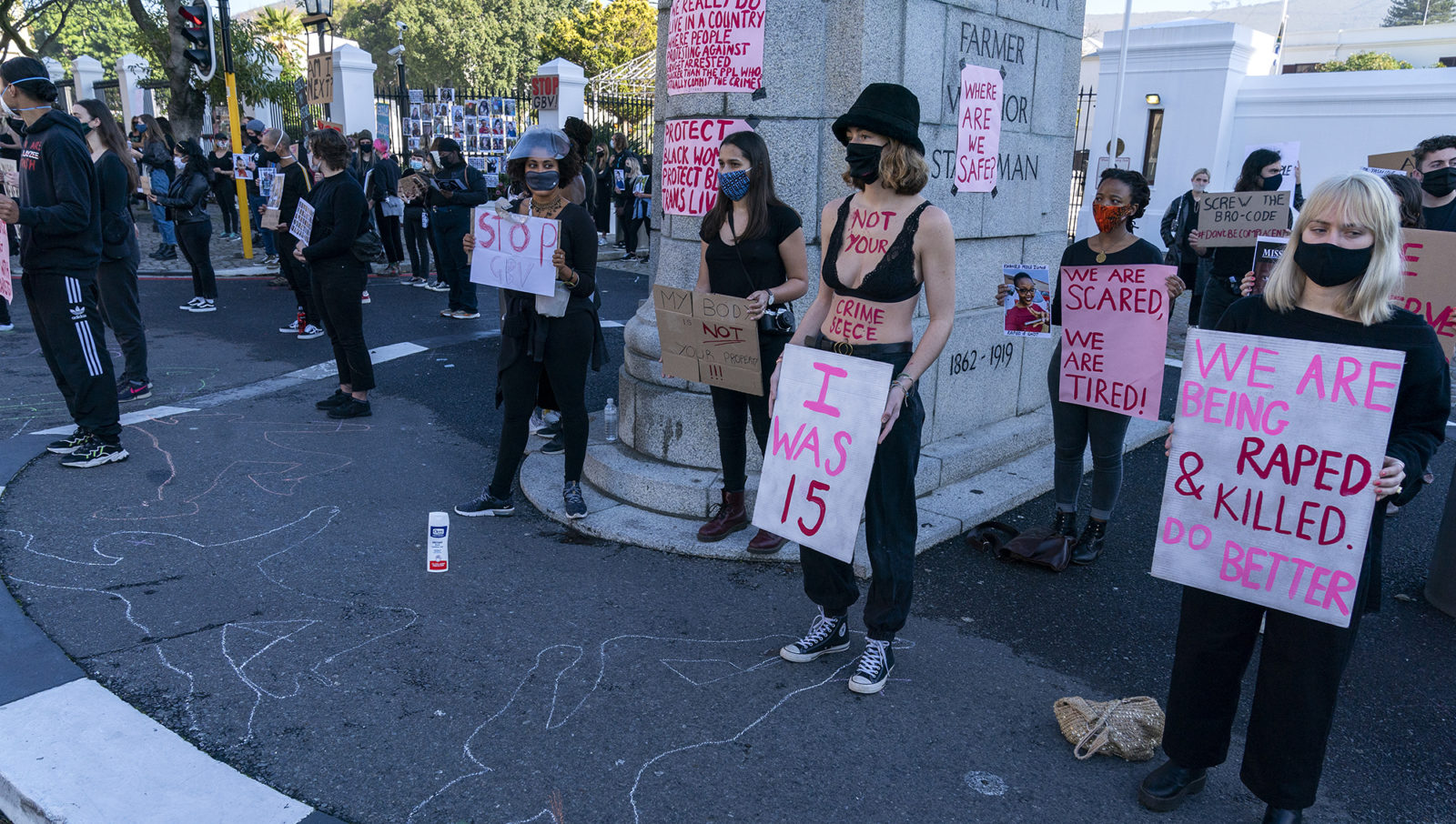 Tuesday’s urgent parliamentary debate of national public importance on gender-based violence and femicide was used to push sectarian interests — from bans on alcohol and pornography to the return of the death penalty. An occasional ‘Malibongwe!’ from the ANC benches aside, the debate was flat.

Some 10 months ago in early September 2019, the National Assembly held a debate on the murder of women and gender-based violence – “Gender and institutionalism: towards strengthening the gender machinery” was the topic — amid a groundswell of protests from the Union Buildings to the gates of Parliament.

#TotalShutDown to mark the start of Women’s Month on 1 August 2019 marched countrywide against gender-based violence with the support of civil society and human rights organisations.

For the second time in just over a month, President Cyril Ramaphosa met protesters on 5 September, this time not at the Union Buildings but outside Parliament.

It wasn’t an unqualified success, given the heckling of Ramaphosa. The president had taken a couple of days to meet the protesters, who had faced police water cannons at the World Economic Forum in Africa gathering down the road from the national legislature.

That evening Ramaphosa delivered an address to the nation on violence against women.

“Violence against women has become more than a national crisis. It is a crime against our common humanity,” he said.

“Today I speak to you as your president, and as a citizen of our country. But I also speak to you as a husband and a father to my daughters. Like millions of men across this country, I am appalled at the war being waged on our sisters, our mothers, our wives, our partners and our daughters.”

Undertakings were made, including changes to update the sexual offenders’ register, and legislative changes to ensure more stringent action against those charged with violence against women.

And on 18 September a joint sitting of Parliament heard from Ramaphosa about the R1.6-billion emergency action plan, and a gender-based violence and femicide (GBVF) national strategic plan.

In his 17 June Covid-19 address to the nation, Ramaphosa added “another pandemic… the killing of women and children by the men of our country”.

“As a man, as a husband and as a father, I am appalled at what is no less than a war being waged against the women and children of our country. At a time when the pandemic has left us all feeling vulnerable and uncertain, violence is being unleashed on women and children with a brutality that defies comprehension.”

While Ramaphosa had named many of the murdered women some two weeks earlier, not one woman’s name was mentioned in Tuesday’s debate. (Well, one was, but the MP didn’t get her age right).

On the last day of June, the National Assembly scheduled another gender-based violence and femicide debate, this time at the request of EFF MP Veronica Mente.

Women murdered this month include Tshegofatso Pule, 28, eight months pregnant, who was found stabbed and hanging from a tree in Roodepoort on 8 June, while on Sunday teenager Amahle Quku was found naked with her hands bound in Siyahlala informal settlement in Brown’s Farm on the Cape Flats.

In Belhar on the Cape Flats, Laticia Kortjie, 27, and her daughter Raynecia, 7, were found dead in a house, several days after having been reported missing.

In Mossel Bay’s KwaNonqaba, Naledi Phangindawo, 25, was axed to death, while in Mthatha in the Eastern Cape, Nompumelelo Tshaka, 45, was found dead in an open field on 5 June. At Msunduse Reserve, KwaZulu-Natal, Nwabisa Mgwandela, 31, was found hanging from a rope in a house after having been beaten.

On the eve of June, Sibongiseni Gabada, 34, of Khayelitsha, Cape Town, was discovered dead in a bag on 29 May, three days after going missing.

From public reports, it emerged the women in most cases were killed by men known to them, close to them and their families — estranged husbands, boyfriends or friends.

While Ramaphosa had named many of the murdered women some two weeks earlier, not one woman’s name was mentioned in Tuesday’s debate. (Well, one was, but the MP didn’t get her age right).

Instead, IFP MP Mthokozisi Nxumalo and African Transformation Movement MP Thandiswa Marawu called for a return of the death penalty as punishment for a life taken. As Nxumalo put it:

“It might be time to revisit the death penalty so that those that violently steal the lives of innocent women and children have to forfeit their own lives.”

The IFP also supported a ban on alcohol that earlier had been proposed by Mente because it exacerbated gender-based violence, as did Al Jama-Ah MP Ganief Hendricks, who wanted domestic protection orders to be issued not by police, but religious leaders. And also the ANC, if their final debate speaker, Minister of Women, Children and People with Disabilities Maite Nkoana-Mashabane’s comments on “a total shutdown of liquor outlets so they can join the fight (GBV)”, are anything to go by.

And African Christian Democratic Party (ACDP) MP Kenneth Meshoe used the occasion to call for a ban on pornography.

The minister shed light on discussions with Police Minister Bheki Cele that indicate some of the fuzziness around gender-based violence at the highest level.

“He (Cele) says now he’s being asked to put a policeman next to every bedroom,” said Nkoana-Mashabane after having dismissed her Cabinet colleague’s public insistence the lockdown had not aggravated reported gender-based violence.

“Under lockdown, in June, more than 30 women were slaughtered at home,” was how Nkoana-Mashabane put it after having called for the same zeal with which Covid-19 is fought to be used against gender-based violence.

The number of sexual offences courts now stands at 102 with 55 Thuthuzela Care Centres, where during the 2019/20 financial year 35,469 survivors received support.

On Tuesday it was left to Nkoana-Mashabane and Deputy Justice and Correctional Services Minister Nkosi Phathekile Holomisa to show that government is acting to redress gender-based violence.

A few hours after Justice Minister Ronald Lamola answered gender-based violence questions in the National Council of Provinces (NCOP), Holomisa repeated those in his debate contribution.

The number of sexual offences courts now stands at 102 with 55 Thuthuzela Care Centres, where during the 2019/20 financial year 35,469 survivors received support.

On 7 February 2020, regulations were gazetted to ensure a “quick, responsive, caring and effective (response) for victims of sexual offences”, Lamola told the NCOP, adding during July, Cabinet would receive for approval three amendment Bills to introduce stricter bail criteria, to extend protection to gender-based violence survivors by, for example, introducing a new offence of sexual intimidation, while closing the gaps in the domestic violence legislative regimen.

But Mente, in opening the 74-minute debate in her and the EFF’s name, argued for a call of action to Parliament to hold ministers and the police to account, be that for lack of evidence collection kits at police stations, failed prosecutions or lack of support for women.

“We sincerely believe all arms of the state are fiddling while Rome is burning… (As a woman) you can expect to be beaten up any time, raped any time with impunity.”

What somewhat redeemed Tuesday’s parliamentary debate was the insistence from both sides of the House for men to step up and become vocal on how killing women, and violence against women, is not okay. That call for “young men to understand their privilege”, as ANC MP Thlologelo Malatji said, and to be part of the solution, is different.

Or as DA Chief Whip Natasha Mazzone put it:

But on Tuesday, it still was a lot of “Enough is Enough” rhetoric alongside dubious and unconstitutional quick fixes punted in pursuit of sectarian interests.

Yet what the numerous gender-based violence debates, usually linked to Women’s Day, have shown, it is that quick fixes – like pretty words – do not work. And Mente’s caution stands:

“If Parliament does not go beyond debate, and make tangible interventions, many more women will die at the hands of men”. DM