Zuma graft case: 15 years and counting – another day, another delay 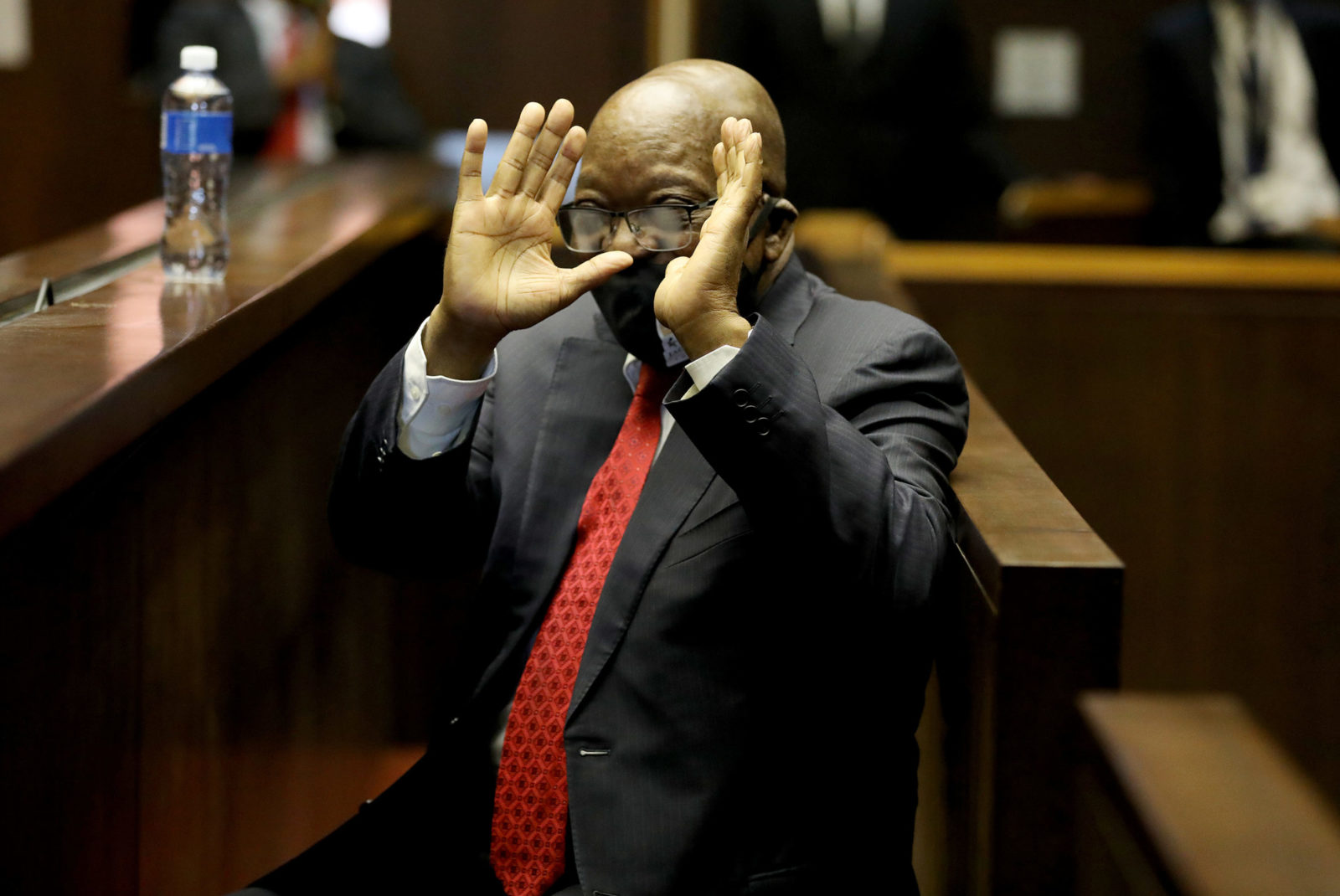 Former President Jacob Zuma appeared in court on the 23 June 2020 where he is facing changes of fraud, corruption, money laundering and racketeering at Pietermaritzburg High Court. Photo: SANDILE NDLOVU/POOL

The impact of the Covid-19 pandemic is blamed for yet another delay in the corruption and racketeering case against former president Jacob Zuma and Thales.

Delays in starting the fraud and corruption trial of former president Jacob Zuma have almost entirely been blamed on his use of the “Stalingrad strategy”.

But on Tuesday, Zuma’s defence team blamed the National Prosecuting Authority for the delays, claiming Zuma was ready and seeking his day in court.

Senior state advocate, Billy Downer, told the Pietermaritzburg High Court that the Covid-19 pandemic had affected the legal fraternity to such an extent that it was difficult to ascertain when the case against Zuma and his co-accused, Thales, would finally make it to court, but that a “practical” trial date would be in the first quarter of 2021.

“Covid affects everything,” Downer told presiding judge Kate Pillay at the start of proceedings, which lasted just over an hour.

Pillay was pushing for an early date for a next appearance, and discussed August as an option; she also said the trial should ideally take place this year. She twice cited Zuma’s age as a reason. The former head of state is 78, and the matter has been in and out of court for over 15 years.

(For background to this case, see instalments from Unaccountable here: Jacob Zuma – comrade in arms and Thales – How to Buy a Country )

“The way I see it, not much is outstanding in this matter. In light of the objections to protracting the trial, one would want the trial to start and end as soon as possible… given [Zuma’s age],” said Pillay.

Acting for Zuma, Muzi Sikhakhane said Downer was looking for reasons to delay proceedings. Sikhakhane wants the trial to start in October.

“Exactly 743 days ago, Downer stood where he is standing, and not just once – but I am quoting one incident – he said to this court ‘the state has always been ready’”.

Sikhakhane said, “Let us stop this narrative that Zuma doesn’t want his day in court. We are ready and now [Downer] isn’t”.

Zuma’s legal team submitted in papers filed with the court on Friday that their client was ready for trial, and that despite the state consistently accusing him of using Stalingrad tactics, it was now evident the state was not ready.

Pillay addressed this in court. “Is the state ready to proceed with trial?” she asked Downer, to which he answered in the affirmative.

“If I had to say [the trial] should proceed in October, would you be ready?” she asked.

Replied Downer: “… the state would be ready in October if it was to go ahead in October.”

The issues at stake, according to Downer, included the “unpredictability” of the pandemic, Covid-19 travel restrictions for witnesses from overseas due to appear on behalf of Thales, and the immense difficulty in obtaining documents.

Thales’ new counsel, Barry Roux, has sought access to all of the documents.

“It’s all documents and hard drives pertaining to the entire case. It was all stored electronically over a decade ago. It all has to be changed into a form that can be given to the defence… it is old technology,” said Downer.

The technicians responsible for converting and supplying the documents could not work because of the lockdown, Downer told Pillay.

“They have now given us a date, which itself is unpredictable, but they have given us an estimate on what they have already completed. In short, that is one of the things that is holding us up.”

Both defence teams had sought additional particulars that the state would have to respond to, said Downer, making pre-trial certification in two months difficult.

“It will be foolhardy to think the court will be trial ready by the end of August. Papers are exchanged and then there are more requests,” said Downer.

“If we bring ourselves to the end of August and we aren’t ready, our learned friends will say we are not ready, and there’s a conspiracy to keep this from trial.”

He said the former president had only entered the debate on the merits of the case on Friday, when he filed a response. The state had been pleading for his engagement since January, said Downer.

Pushed by Pillay, he did, however, say that should she insist on earlier dates, the state would “move heaven and earth” to have matters ready.

Sikhakhane told Pillay he wanted to clear up an “administrative issue” regarding Zuma’s non-appearance in February, when a much publicised “sick note” was presented to the court, and found to be seriously lacking in detail.

Zuma’s then attorney, Daniel Mantsha, contended at the time that his client was in Cuba seeking medical treatment – a matter of national security and thus unable to divulge the nature of the illness. A stayed arrest warrant was issued for Zuma as a result.

“We have tried to get the doctor to do the sick letter again, to say Zuma was ill and in Cuba,” Sikhakhane told Pillay. He then handed Pillay and Downer an updated and presumably more thorough “sick note”.

“This is the first time I have seen the letter, despite having asked for it twice,” Downer told the court, but nevertheless agreed that all appeared to be in order.

Moving on, Sikhakhane again brought up the state’s constant assertions that it had “always been ready” to take the case to trial, and that the only delays were from Zuma, who could not appear to get his house in order.

“Mr Downer’s reasons for [the delays in coming to trial] are shifting as he moves… today it’s Covid-19,” said Sikhakhane.

During discussions about pre-trial matters and dates, Downer had said he “doesn’t want another Judge Msimang situation”, said Sikhakhane.

Judge Herbert Msimang struck the same matter from the roll, in the same courthouse, in 2006.

Later in Tuesday’s proceedings, Sikhakhane tried to have the matter removed from the roll, but Pillay would not entertain it, citing the need for a substantial application.

“So basically, the context of this matter and what we are doing here, we all gathered here to save face for the state. I told Downer we will insist on a date in October. Roux is flexible about [the dates],” said Sikhakhane.

He also brought up the issue of KwaZulu-Natal judge president Achmat Jappie having entered into “ex parte” conversations with Downer, in the form of a telephone call. “It is clear that changing of the indictment was discussed.”

Sikhakhane said he was still awaiting a response from Jappie on the “inappropriate” discussions. He has asked that Jappie remove himself from the matter. Pillay said she had no authority in this regard, and told Sikhakhane to move on.

Zuma’s lawyer continued on the previous trajectory, making mention of the state’s “ever-shifting goalposts” and Downer blaming the requested delay on the coronavirus.

Sikhakhane said that even if Zuma had not filed his request for further particulars on Friday, the court had to take into account that the defence had been “focused” for the past two years on the stay of prosecution his client had sought, which included reading “3,000 to 4,000 pages” of documents.

“We have had to increase our [legal] team, because we are dealing with a man saying we are trying to delay. Mr Downer sets a timetable that suits his own date of 2021. All he is doing is an egg dance to get to 2021. We are ready now!” he emphasised.

But Pillay shot back: “You still have to receive your response to your first particulars, so you are not ready.”

“Even the 56 pages of particulars… we assume that a man (Downer) seized with this matter for two decades, will be able to answer [timeously]. We think October is a reasonable time,” responded Sikhakhane.

He said he agreed with Downer, however, on the unpredictability of Covid-19, and with Pillay implying that Zuma’s age placed him in a dangerous category should he contract the virus during court proceedings.

“My client sits in court, even though it is just motion proceedings, because he believes it would be disrespectful to the judge to not come.”

Sikhakhane waxed on about a lack of trust between himself and Downer because of the latter’s “shifting reasons”.

Addressing Thales’ concerns, Roux said he wanted it on record that his team was not “sitting back” when it came to requests for particulars, but that an issue had to be cleared up regarding the racketeering charge, and the competency thereof, and the additional payments made to Zuma from his former financial advisor, Schabir Shaik. Thales is alleged to be responsible for the bribes that were made via Shaik, to protect itself from a probe into the Arms Deal.

The application would probably cause more delays, said Pillay, as would a possible appeal depending on the outcome of the decision.

The judge finally ruled that the matter be adjourned to 8 September, and warned Zuma that he had to appear in court.DM