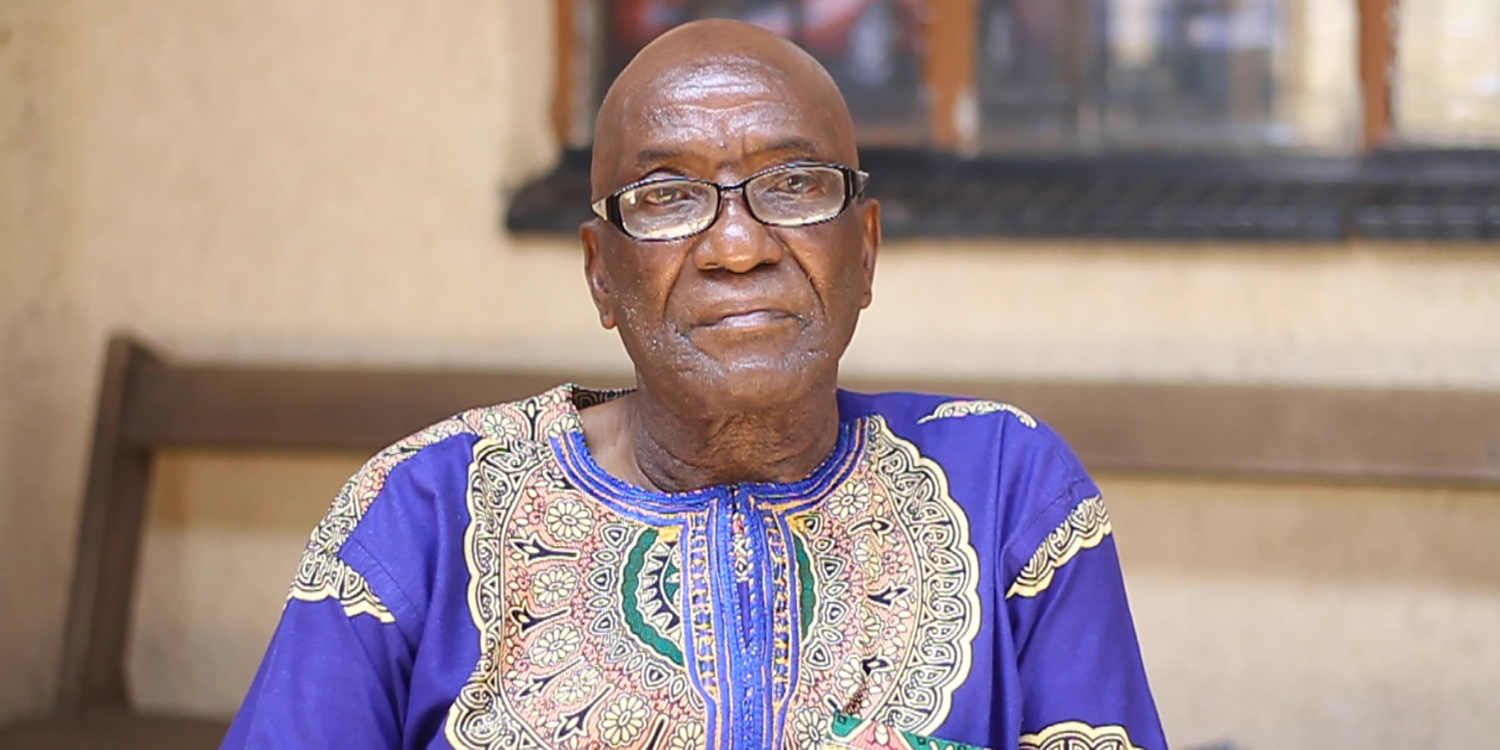 When Baba Samuel Ndhlovu left his parents’ Bushbuckridge home at the age of 25, he hoped to find a better life in Johannesburg. Forty-seven years later, the grandfather of 10 lives in a small back room in Soweto. Every month, he struggles to send money home after his and other informal traders’ agreement with the City of Johannesburg left them shorthanded. When the lockdown commenced, Ndhlovu found himself worse off as the City of Johannesburg has thus far failed to assist traders despite their duty to administer funds from the Covid-19 relief fund.

Baba Samuel Ndhlovu goes through a pile of photographs of his family and the house he built them back home in Bushbuckridge, Mpumalanga. The four-bedroom house which he built with the help of his eldest daughter is his proudest accomplishment. However, he seldom gets to enjoy the fruit of his labour as he toils away in Johannesburg, selling food to commuters who flock the Bree Taxi Rank, stopping to get a takeaway before hurrying off to various destinations across the city.

When the novel coronavirus landed on South African soil, it spelt more trouble for Ndhlovu. Many others like him, who sell hot cooked food, were finally able to go back to work on 1 June after more than two months of no income and no assistance from the city’s economic development offices who are tasked with dispensing funds to the informal sector.

But before every activity was disrupted by the coronavirus, the problems faced by Ndhlovu and other food traders had already left them battling for crumbs. In 2002, the traders were informed that the city would build a market where they could legally house their businesses for a monthly rental fee of R350. After the city repeatedly failed to uphold its agreement to supply traders with gas in return, Ndhlovu says a number of traders stopped paying the rent as it cost them the same amount it takes to stock gas for a week’s work.

Now that Ndhlovu is finally able to go back to work, the city’s failure to keep its part of the agreement remains a stranglehold on the old man’s livelihood.

Ndhlovu’s introduction to the city is one that closely mirrors that of his customers. He, like many working-class South Africans, moved from his quiet piece of the country to seek opportunities promised by the City of Gold. And he, like many others, years later continues to watch his dreams for his family amount to little as he struggles to make ends meet.

While his wife and grandchildren in Mpumalanga live in the home he built for them, he has spent the last 14 years in a tiny backroom in Soweto. His old double bed consumes most of the room leaving little space for him to squeeze in his other belongings and accommodate his slender frame.

Meanwhile, his rent of R900 consumes the bulk of the money he makes at his stall.

It’s a Sunday and the old man is taking his one-day rest before starting his six-day work week.

“[On the last Saturday] I worked, I only sold three plates of food,” he says.

Business was not always this bad, he explains. There have been good times and bad times but these days have been the worst times.

“When I first arrived in Johannesburg I found work at a construction company,” says Ndhlovu.

He worked several jobs before doing a 27-year stint at a correspondence learning company. The 72-year old says he earned R10 an hour before the company closed down in 1996.

“One Friday, the 12th of July, we came to work as usual in the morning only to find all the gates locked,” Ndhlovu says.

“We didn’t know what was happening. Only later did we find out that the business had gone under and we were out of employment.”

Ndhlovu says he struggled to find constant work for a year before he decided to open a takeaway joint in Alexandra township.

“My aunt had taught me how to cook when I was younger so I used that skill to start a small business.”

But the crime in Alexandra made it impossible to survive. Thieves constantly broke into his shanty and stole his stock and equipment. So Ndhlovu decided to move south and started what was then a fairly fruitful takeaway joint at Bree Taxi Rank.

He was later elected chairperson of the vendors committee and seemed to have finally found a sanctuary among his colleagues. He was making a decent living which allowed him to send money home and take care of his and his family’s needs.

This was before the City of Johannesburg began construction of the Metro Mall structure that now marks Bree Taxi Rank in Newtown.

When the City of Johannesburg began its construction of the Bree Taxi Rank Metro Mall in 2002, Ndhlovu says representatives from the city informed them that the new structure would consist of business units that the traders could rent from the city. Any informal trade outside of the structure would be deemed illegal and their goods would be confiscated.

“They told us the rent [of R350] would cover gas that will come straight into our units for our use,” says Ndhlovu.

Almost two decades later, the Metro Mall vendors still struggle with gas supply. Ndhlovu says when their committee approached the city with the matter, they were told by then manager, Justice Mashele, that the pipelines bringing in the gas were not functional as they had corroded.

Van der Colff says the city paid Egoli Gas a deposit of just over R200,000 for the installation of a gas pipeline leading to the Metro Mall.

“That’s all we’re mandated to do. The city then had to get technicians to install a pipeline leading the gas supply into the [vendor stalls],” says Van der Colff.

Pooran and Van der Colff say that after installing the main pipeline, Egoli Gas performed their routine pressure test which determines if there are any leakages or faults with the pipeline.

“The pressure has to stay at a [constant figure] for 24 hours,” says Pooran.

“If it does, it means there are no leakages and the system is deemed safe for commissioning and introduction of live gas.”

Pooran, carrying copies of the Metro Mall usage records, says their data shows that no gas was used at the site since the installation of the main pipeline. And after close to two years of the pipeline being inactive, the city cancelled their contract and Egoli Gas returned the deposit.

It is unclear as to whether the city ever contracted gas technicians to create pipelines leading into the individual stalls but Ndhlovu says they never received supply into their stalls.

Daily Maverick made numerous attempts to get a response since December 2019 from the City of Johannesburg regarding the allegations about the gas line. To date, the city has failed to respond to the request for information.

And while Level 3 of the lockdown comes with easing of regulations around the sale of hot, cooked food, the city’s informal traders have suffered an unmitigated blow during their stay-at-home period.

As the chairperson of the Metro Mall trader’s association, Ndhlovu has made several attempts to enquire about accessing the funds set aside to assist workers in the informal economy.

On 19 May, Daily Maverick reported that the Johannesburg Informal Traders Platform (JITP) had written to the city asking for assistance. At the time of publishing, the organisation had not received a response or assistance. Ndhlovu, who is also a member of the JITP says their failure to secure a response has turned fellow traders against the organisation’s representatives.

“We told them that we had written to the city to ask for help – even if it is food parcels,” says Ndhlovu.

“But now they are accusing us of many things. They think we took their parcels for ourselves but we have not received anything.”

After several attempts to find out the procedure that informal traders must follow to access the informal sector relief fund, it is still unclear what kind of relief the city has in store for the traders and how they can access it.

Responding to questions about the relief fund, spokesperson for the City of Johannesburg, Nthatisi Modingoane said:

“The Economic Development department has commenced with exploring different funding interventions for SMMEs and informal traders. The department is currently awaiting internal approvals subject to availability of budget.”

Modingoane did not indicate when the decisions will be finalised, instead added that, “SMMEs could also apply directly to the Department of Small Business Development (www.smmesa.gov.za).”

While Ndhlovu and other cooked food traders attempt to patch the gaping chasm left by two months of lockdown restrictions, the old man remains disheartened by the many years of disappointment.

“We are following the law but our businesses are dying.”

Ndhlovu has never considered retirement – it has always been too far out of reach. However, he says he never imagined things could ever be this bad. At 72, he still sees no improvement in his life after working in a city that isn’t home for 47 years. DM