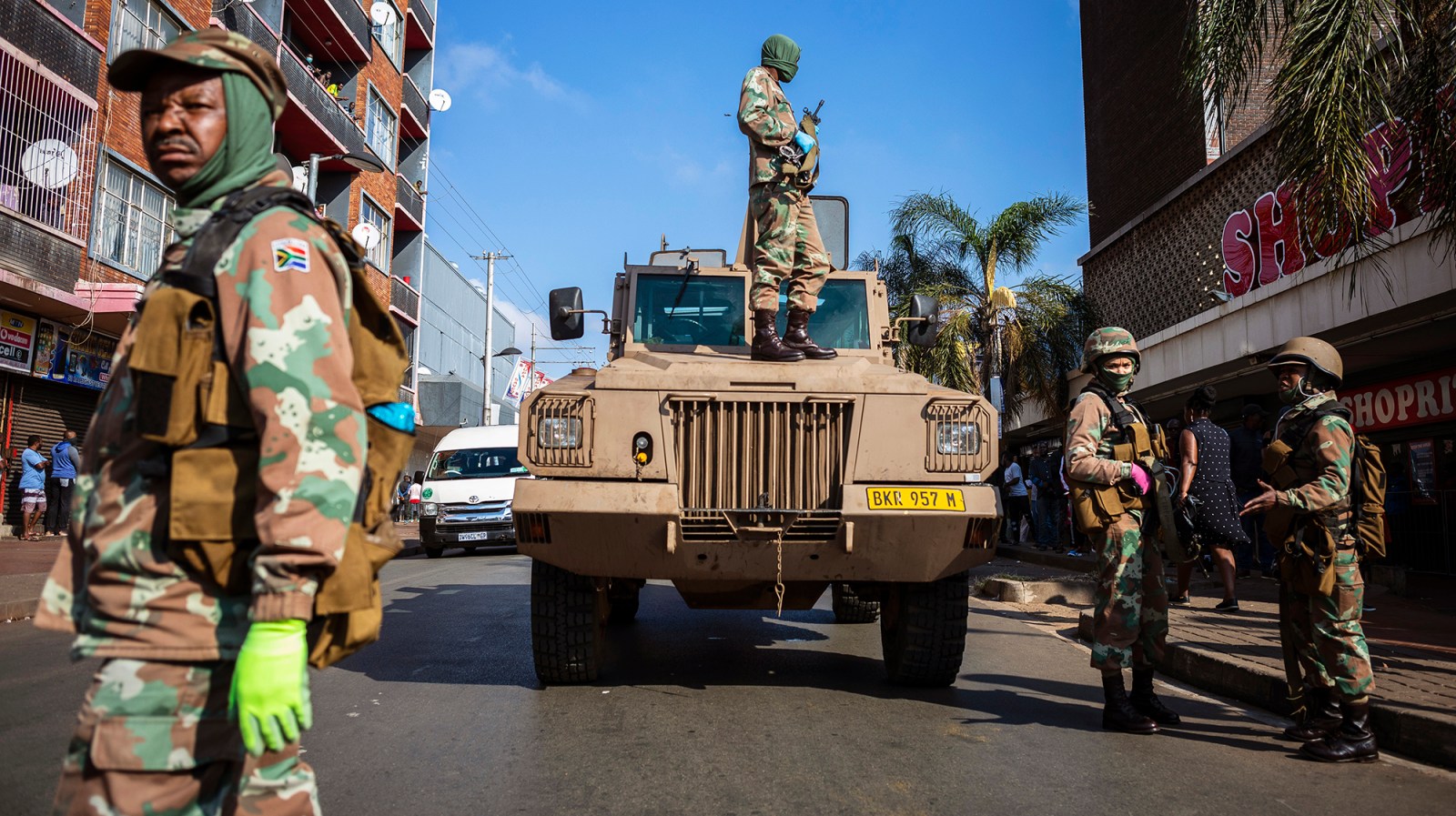 Members of the South African National Defense Force on patrol in Johannesburg during the national lockdown. (Photo: EPA-EFE / Kim Ludbrook)

Following the Collins Khosa judgment, the C-19 People’s Coalition held a webinar to discuss the significance of the high court finding.

Just under two weeks have passed since the North Gauteng High Court ruled in favour of the Khosa family, ensuring that South African National Defence Force (SANDF), South African Police Service (SAPS) and Johannesburg Metro Police Department (JMPD) officers who were present when Collins Khosa was beaten and killed in Alexandra, Gauteng in April 2020 must be suspended and authorities must complete their investigations into his death.

The judgment highlighted police and military violence in the nationwide lockdown.

The Independent Police Investigative Directorate (IPID) received 828 complaints between 26 March and 5 May. Of those cases, 376 were lockdown-related.

“This includes 10 deaths as a result of police action and a further 79  incidents of a discharge of an official firearm. Five cases of torture, 280 of assault and seven of corruption,” Thato Masiangoako, researcher at Socio-Economic Rights Institute (SERI), said at a People’s Assembly webinar held by the C-19 People’s Coalition on Tuesday 26 May.

These numbers, according to Masiangoako and other panellists at the webinar, reflect the over-criminalisation of South Africans by the SANDF, SAPS, Metro police and private security companies during the lockdown as well as the incapability of those authorised to take accountability for their actions.

“What the lockdown has seen is an over-criminalisation of people. It has made ordinary people criminals in the ordinary course of their lives,” said Musa Gwebani, activist and panellist.

“We suspected from the outset that the enforcement of the lockdown was going to be something to watch in terms of the State of Disaster, just based on the experiences that we have seen with police over the years,” said panellist Franny Rabkin, a Mail & Guardian journalist.

The judgment, passed on 15 May, found that Khosa had died from injuries sustained during an attack by members of the SANDF who had used “excessive force”.

“Mr Khosa was having a drink at his house and they thought it was against the lockdown regulations so they confronted him and a scuffle of some sort broke out which resulted in Mr Khosa’s death,” said panellist Thulani Nkosi, a senior attorney at SERI.

“What happened after this death is that no one wanted to take accountability for what happened. What was also shown was that he did not die instantly – he died three hours after the attack.”

Panellists further noted that since the start of the lockdown, there had been an increase in reports of abuses by law enforcement officers, ranging from unnecessary and arbitrary arrests, harassment and “milder” forms of punishment to extreme and excessive uses of force, leading to grave injuries and tragic deaths, especially among the most vulnerable.

“What we have seen is how responding to a pandemic which had far-reaching implications for people around the world has disproportionately affected the poorest of the poorer and the more vulnerable communities,” Masiangoako said.

Pierre de Vos, Claude Leon Foundation Chair in Constitutional Governance at the University of Cape Town, told the webinar that the judgment stated that an independent party should investigate police violence, and organisations like IPID and the Military Ombud have become too political and are under-resourced.

“The problem is then, if those parties do not work, who guards the guardians? Who has to guard the soldiers when they are deployed and the police?” asked De Vos.

Furthermore, the aggressive use of language by those “in power” like Defence Minister Nosiviwe Mapisa-Nqakula who used the phrase “Skop skiet en donner” and Police Minister Bheki Cele who uttered words like “We must destroy places where alcohol is be sold” must be called to order.

“The utterances of the very violent language that is used by the minister of police and the SANDF has made it clear that in the absence of clear directives the presence of all the security forces of the state is simply to intimidate people,” Gwebani said.

“Government must be reminded that the people of South Africa still have their rights and the government is still obligated to respect and protect those rights,”  Nkosi said. DM