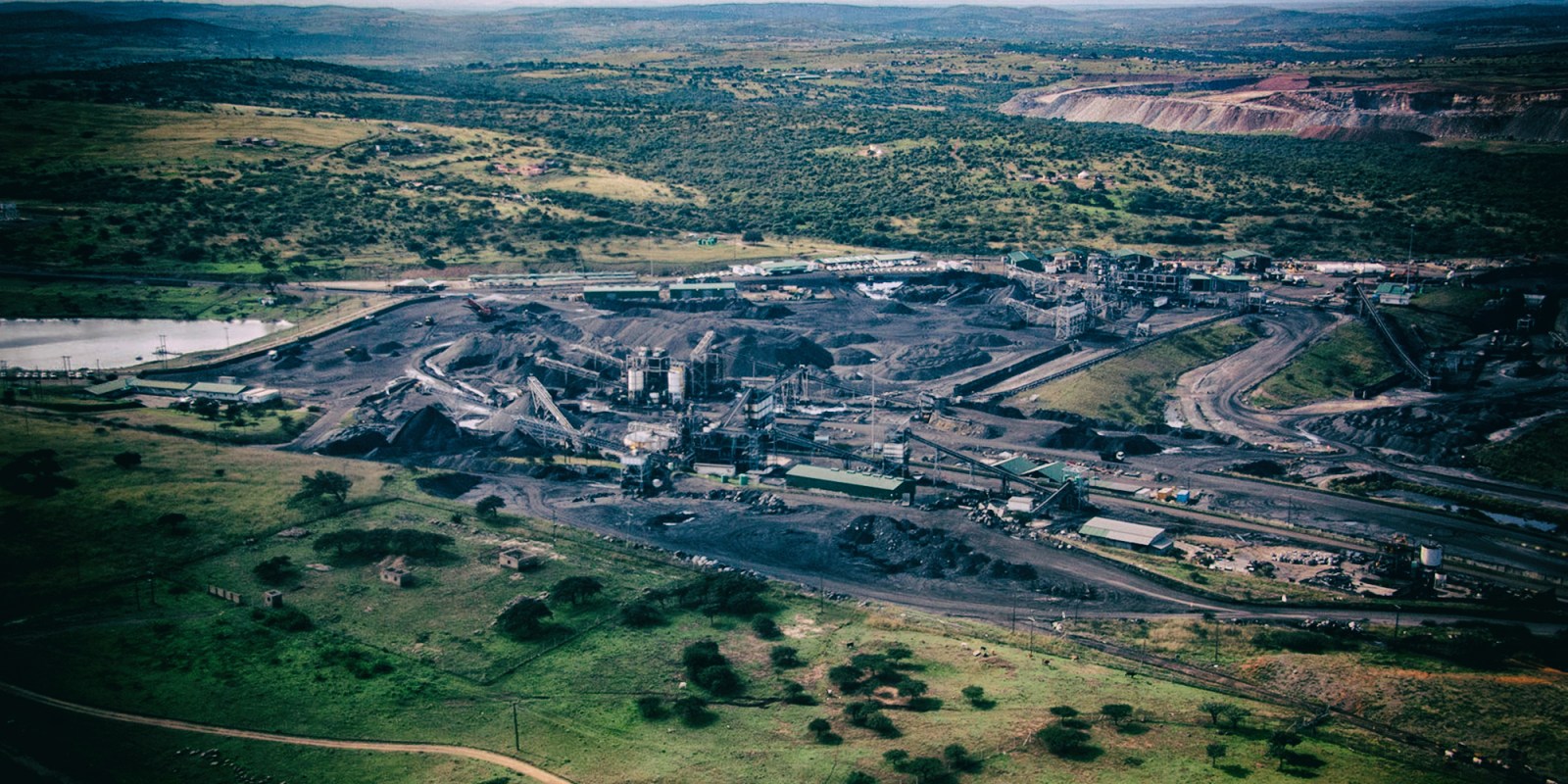 The Somkhele coal mine on the border of the Hlhulhuwe-iMfolozi game reserve in KwaZulu-Natal. (Photo: GroundUp / Roy Symons)

The people of Mpukunyoni in KwaZulu-Natal are the latest in a growing list of rural South African communities whose land rights are under siege as a mining company seeks to remove them from their homes.

Plans for the expansion of operations at the Somkhele mine on the border of the Hluhluwe-iMfolozi Park has brought strife to the community and the mine’s owner, Tendele Coal, is now taking legal steps to forcefully relocate residents of 24 homes in Ophondweni and Emalahleni villages under the Mpukunyoni Traditional Council (MTC).

Somkhele mine, owned and operated by Tendele Coal (Pty) Ltd, is one of the country’s largest suppliers of anthracite. The Mfolozi Community Environmental Justice Organisation (MCEJO) currently has two other court cases (one in the Supreme Court of Appeal and another in the North Gauteng High Court) against Tendele Coal, the Minister of Mineral Resources and Energy and nine others. Both those cases challenge Tendele’s operations.

The MCEJO has several hundred members in Mpukunyoni. The conflict between MCEJO members and the mine dates back to 2007, with the first wave of relocations taking place around this time. This was prior to Tendele commencing with mining operations in the area.

At the time, Tendele negotiated only with individual households. This resulted in improper consultations and inadequate and unequal compensation, which led to social unrest. With the granting of an amended mining right in 2016 by the department of mineral resources, giving way to the expansion of mining operations in Somkhele, a renewed wave of social unrest ensued.

The company says it has already secured signed agreements from 121 of the 145 families it plans to move. On 7 May, it launched an application in the Pietermaritzburg High Court to force the remaining 24 to go. In his founding affidavit, Tendele CEO Jan du Preez says that if mining does not commence soon in the target areas, his company will be forced to retrench its workers.

The court action follows increasing pressure on the community to agree to the removals, and takes place in the context of reports of intimidation and violence by unknown perpetrators.

On 17 April, two armed gunmen entered the home of Sabelo Dladla in Dubelenkunzi village, which also falls under MTC, asking for Dladla. Dladla is one of the leaders of the MCEJO. It appears that the gunmen did not know they were talking to the very person they were looking for, and after being told by Dladla that “he” was away, they proceeded to assault him anyway. The gunmen took several valuables before leaving. A case of armed robbery was opened at the KwaMsane police station. Dladla and his family went into hiding following this incident.

A week later, a family home in Ophondweni was shot at at least 24 times as the family was settling down for the night. No injuries were reported but 19 spent cartridges were found on the scene. The house belongs to one of the families that refuses to move, having been offered meagre compensation.

With the escalation of violence and intimidation, there is considerable anxiety in the community that the lives of those refusing to move may be at risk. In particular, the Covid-19 lockdown, which restricts monitoring and reduces the visibility of incidents in the area, makes such activist communities easy targets and places them at heightened risk.

Less than two weeks after the night-time shooting, the family whose home had come under attack found themselves cited as a respondent in Tendele’s court application. In the matter that will be heard on 17 June, the company is seeking to have the court confirm the amount they have determined to be payable under section 54 of the Mineral and Petroleum Resources Development Act (MPRDA) to the Ophondweni and Emalahleni communities. This would be deemed compensation for the losses or damages the communities are likely to suffer as a result of being relocated.

The section of the Act the company references provides for the determination of the compensation a mining company must pay in the event that the owner or lawful occupier of the land has suffered, or is likely to suffer, loss or damage as a result of mining operations. The Constitutional Court in the Maledu judgement handed down in October 2018 held that mining cannot take place until compensation has been negotiated.

The key question that arises is how the amount of compensation should be determined and what are the relevant factors that should be considered in calculating that amount. Land managed under customary land tenure systems cannot be valued in the same way as land in urban areas.

There are some surprises in Tendele’s court application. Unusual in this sector, the application makes several important concessions regarding what should be included in calculating compensation. The company recognises the need to compensate for loss of familiar environment and for psychosocial distress caused by moving graves and having to relocate.

It is critical to understand that most rural residents draw on a range of livelihood strategies that rely on varied income streams. In particular, land and common property resources play an important role in supporting household economies of rural residents. Land-based livelihood strategies are commonly used in various combinations and include smallholder arable production, intensive cultivation of homestead plots, livestock husbandry and collection of wild natural resources such as wood, thatch and berries. These resources support rural livelihoods in numerous ways. They provide goods for direct household consumption and reduce cash expenditure by providing free substitutes.

Further, they generate cash income through local or wider-scale trade and serve as a safety net in times of shock or loss. Each of these land-based livelihood strategies makes measurable contributions to the household and should be quantified economically. This does not even begin to take account of the various cultural functions and needs that are met through access to land.

Rural communities have also argued for compensation for the loss of less tangible connections to land and for the socio-cultural disruptions caused by having to relocate, including for damage to areas that have cultural and spiritual significance. This argument highlights the need to move beyond a utilitarian view of land, to one which recognises the value of land which supports a sense of place, upholds cultural practices and reinforces worldviews or spiritual foundations.

There are some surprises in Tendele’s court application. Unusual in this sector, the application makes several important concessions regarding what should be included in calculating compensation. The company recognises the need to compensate for loss of familiar environment and for psychosocial distress caused by moving graves and having to relocate.

But while Tendele does make some concessions, which appear to be as a result of community pushback, these do not go far enough in providing just and equitable compensation. Civil society organisations concerned with land rights are gearing up to assist the Ophondweni and Emalahleni villages in challenging Tendele’s application.

The outcome of this case will be significant as no case law exists on the question of what constitutes compensation for loss or damage as contemplated by section 54 of the MPRDA. Over and above the 24 families, this case will have lasting impacts on all households facing relocations and economic displacement in South Africa as a result of mining.

There is a reality that needs to be recognised, which is that mining companies in rural areas draw much of their profit as a result of the steep cost borne by local communities who are offered derisory levels of compensation for deprivation of their rights and common property resources. Such inadequate compensation is one of the key contributors to deepening poverty and inequality in mining-affected communities.

It is time that any compensation determination should take into account the true costs these communities are being asked to carry. DM

Ramabina Mahapa is a researcher with the Land and Accountability Research Centre in the Department of Public Law at the University of Cape Town.