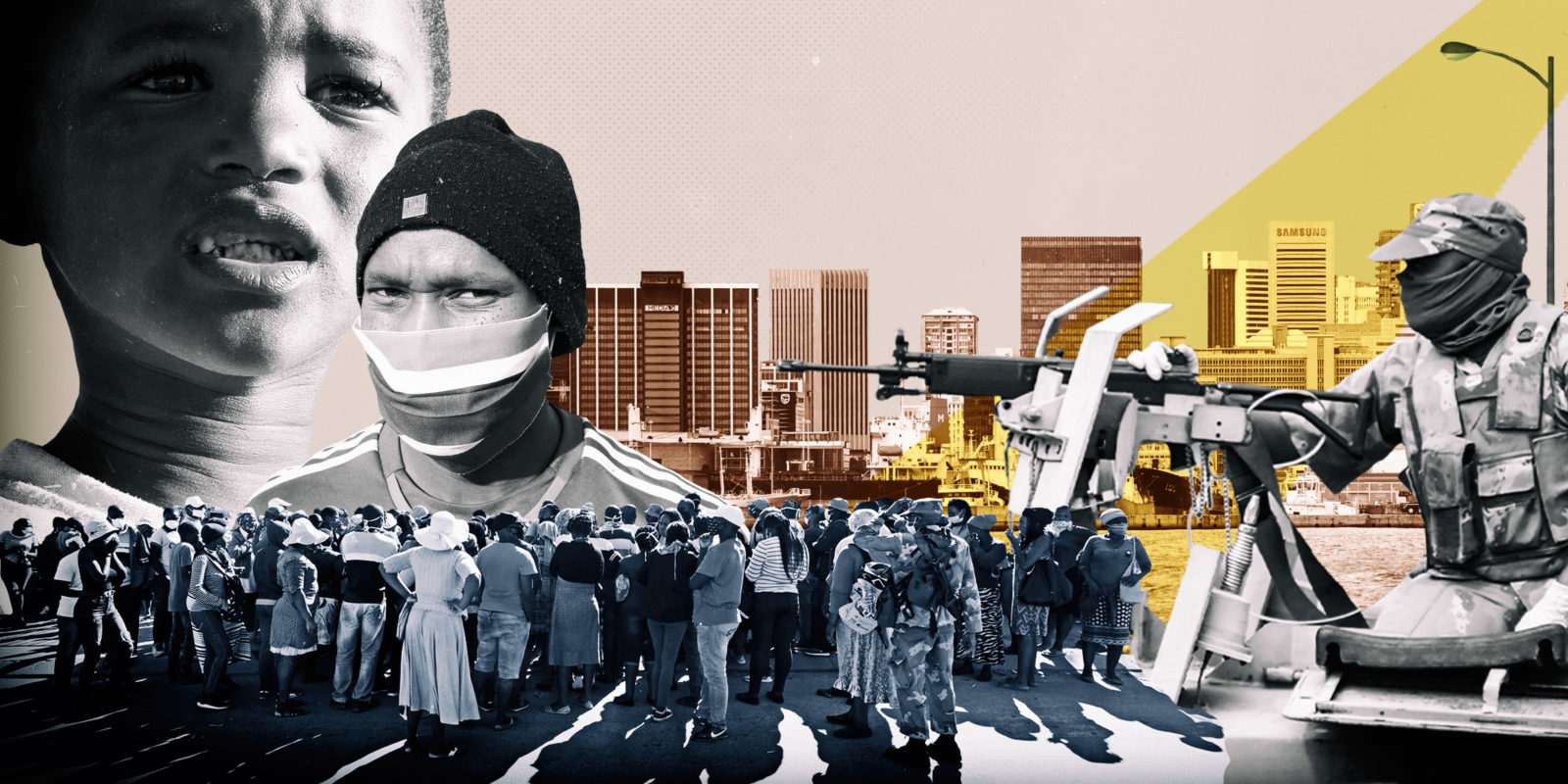 In townships, informal settlements and rural areas there is evidence that people are going hungry at an alarming rate. In Sandton, the numbers show just how quickly the economy is shrivelling. Lawyers are contemplating their options. Everywhere, anger and frustration is growing. And in military barracks, it appears that arrogance and a sense of impunity are increasing. South Africa finds itself in a dark and dangerous moment.

It is by now trite to say the crucial decision that needs to be made for the rest of the year is when the lockdown should be moved from Level 4 to Level 3, which provinces this will affect, in which way, and so on.

It is also obvious how this decision should be made: almost entirely on evidence and advice from epidemiologists and economists. Instead, there is now the very real potential for this process to become hopelessly politicised, resulting in the same chaos as in the United States where more people die and millions more are made poorer almost overnight.

Making governing decisions by choosing between two horrific and diametrically opposing choices are probably among the toughest choices any leader in a democracy will have to make. The only ones that may be tougher would involve sending soldiers into battles in which they are certain to die.

But those decisions must be made.

It should be remembered that in a democracy, there are possibly no examples of political leaders making policy or taking tough decisions based only on technocratic expertise; politics is always present.

It is perfectly clear that pressure is building against the lockdown as it is presently instituted.

In townships, informal settlements and rural areas there is evidence that people are going hungry at an alarming rate. In Sandton, the numbers show just how quickly the economy is shrivelling. Lawyers are contemplating their options. Everywhere, anger and frustration is growing. And in military barracks, it appears that arrogance and a sense of impunity are increasing.

South Africa finds itself in a dark and dangerous moment.

Before any other analysis is contemplated, the way in which a lockdown would be relaxed needs to be examined. It is very different to the way in which a lockdown is announced. When you are restricting activities, you have to give people notice. If you announce a lockdown with immediate effect (the way India did) you have many negative consequences. People are separated from their families and children, big industrial processes cannot just be stopped, and there is no time to prepare psychologically (or make sufficient purchases).

But when you announce a relaxation, the moment you announce it, it is impossible to enforce the tighter restriction. If a relaxation involved an announcement on Sunday night that from Wednesday people could exercise until 10am, they would immediately do that from Monday morning. For this reason, there are unlikely to be any hints of relaxation in advance. If there were, people would simply ignore the restrictions completely.

Then there is the concept of what epidemiologists call “excess deaths”. How many more deaths are being caused by the coronavirus than would have occurred during the same time period, anyway? So far, the lockdown has probably saved more lives than the Covid-19 has taken. Hospitals report far fewer admissions, there is much less violent crime, and fewer people are driving, which means fewer car accidents.

This confirms that all along, governance is not binary. It is about managing risks, freedoms and allowing activity.

In this case, it is also about your aim: what is the intention of the action? In this case, the lockdown was never meant to stop the virus from moving, it was to buy time to build enough healthcare capacity to manage the peak.

When making these decisions it is important to consider the evidence.

Already, two of the main medical experts involved in this, Professor Salim Abdool Karim and Professor Shabir Madhi, have said that they believe the lockdown has achieved what can be achieved and should now be relaxed.

This suggests that there is nothing more that can be done through implementing this lockdown in such a broadly restrictive way.

At the same time, the evidence about how this is forcing people from abject poverty to hunger and perhaps close to starvation, is growing. NGOs talk about long, hungry queues for food parcels, and how they cannot get enough food into homes that need it. The SA Social Security Agency showed last week it cannot get enough money into these households. And the economy, as a key mechanism for food production and distribution, is not functioning.

All of this would suggest that the time has come to allow for more freedom of movement, to allow more economic activity to be ignited again.

However, it is possible that important political factors come into play.

On Friday, the DA said that it now formally opposed the lockdown in its current form. Two advocates, Nazeer Cassim and Erin Richardson, have let it be known that they are not happy with the explanation given on the legalities of the National Coronavirus Command Council and its decisions. The Presidency has said it will not make public the way that that council reaches its decisions (as it is a sub-committee of Cabinet). The Fair Trade Independent Tobacco Association has already lodged a legal challenge to the continued ban on cigarettes.

While all of this is about people protecting and representing their constituencies, and may or may not be well-intentioned, it can have a polarising effect.

It forces people to take sides in what might now become an adversarial battle.

People in the ANC might now feel they have to back the continued lockdown policy, even if they feel that the scientific evidence should be paramount. This could be a similar dynamic to what happened around former President Jacob Zuma for many years. When opposition parties or lawyers or other sectors of society attacked him, he was able to claim this was proof that the ANC itself was being attacked, prompting the party to close ranks around him, even many knew very well that Zuma was spectacularly corrupt and inept. Now, the same could happen here.

Some Cabinet ministers may argue that their very authority and the legitimacy of government are being challenged, and that they must respond, they must “prove” their power, creating a very difficult and dangerous situation.

The EFF has stated, strongly, that the lockdown should continue because it will save lives. Its critics might claim that in fact the longer the economy is in lockdown, and the poorer and angrier people become, the more potential voters for SA’s most populist party would benefit. Adding confusion and frustration to the debate only helps such organisations.

This incoming political chaos will also obscure the original aim of the lockdown. The EFF and others will claim that those who want to relax the lockdown are happy to let people, and primarily poor black people, die. They will claim that some greedy bosses are motivated by money and profit.

But the truth is, the virus cannot be stopped. The aim of the lockdown was only to push out the peak, to buy time in order to enable the health system to attempt to treat all patients who contract the virus and need help. It was only ever to lower the number of “excess deaths”. Already, many say that the point has been reached at which the number of deaths caused by hunger and economic deprivation will be higher than the number of people who die from the virus.

This has the potential to create a situation in which government, and many of the people within it, feel they have to continue with the lockdown. And while it may be that people will say some areas should go to Level 3 and others to Level 2 or back to Level 5, this doesn’t really matter. The cities are the hotspots, both of the virus and economic activity. Unlocking most rural areas would not make enough of a difference to the economy.

The risk is that if political decision-makers are forced into a corner, to protect the power and authority of government, the potential for bad outcomes will grow.

At the same time, the medical experts advising the government are also public figures. Abdool Karim still carries the scars of how then-President Thabo Mbeki attacked him at the beginning of the HIV pandemic. He has a high public profile. So does Madhi. And both cannot be fired or criticised easily. As a result, they have the power to make their voices heard in this debate.

This could further delegitimise government just as the number of infections begins to rise and large numbers of people start to die — which will lead to more criticism, more anger and more division.

This terrible possibility could end up very similar to the situation in the US under the “leadership” of Donald Trump. There, the pandemic and the response to it has become hopelessly politicised, with the result that many people have died unnecessarily — and society appears to be more divided than since the Civil War.

This is a risk that we must work hard to avoid. We have been warned. DM