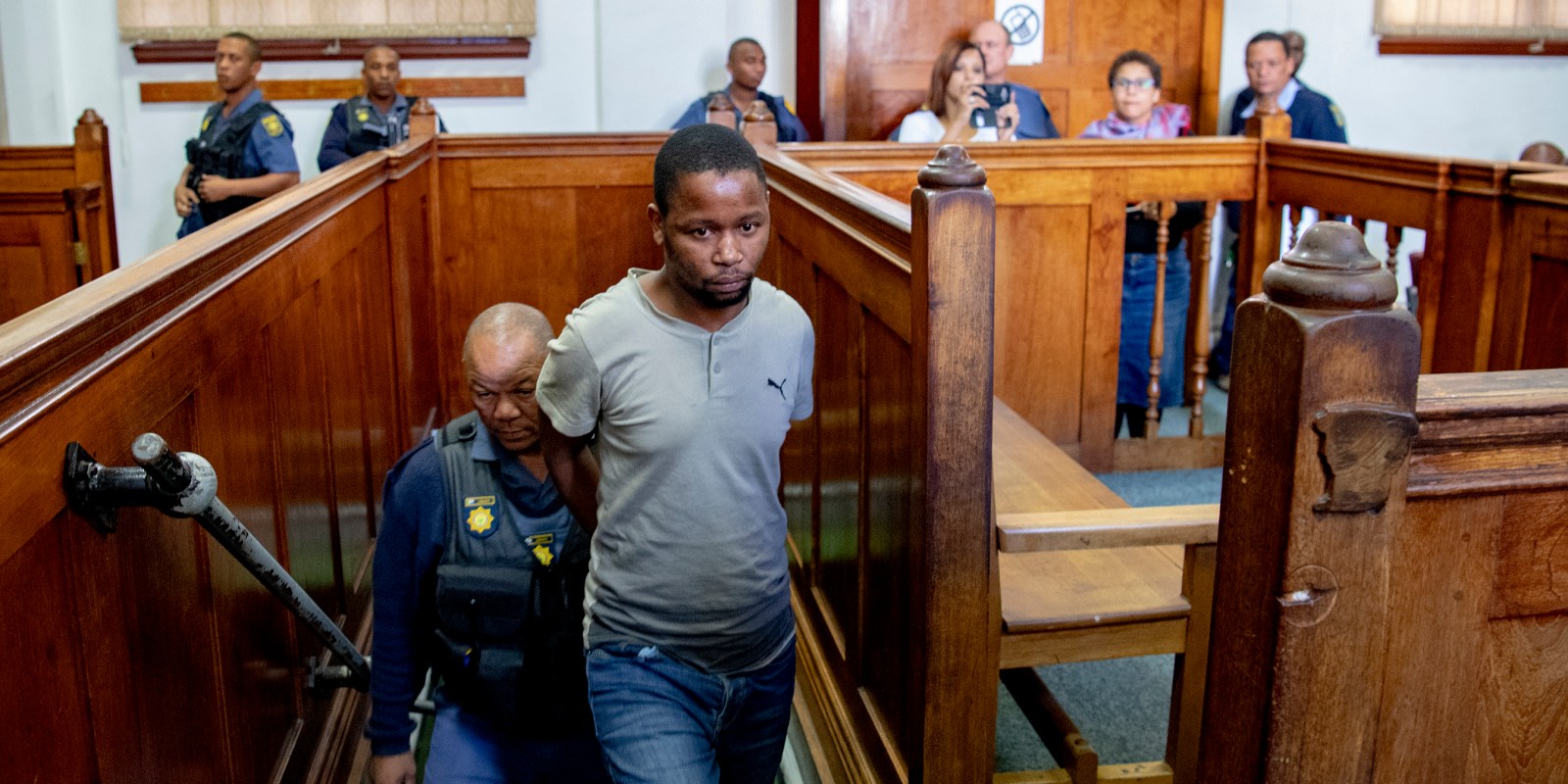 There have been a string of hits and attempted hits on lawyers who represent gangland figures, the latest being an attempt on the life of prominent Cape Town lawyer William Booth. The fear such a trend engenders could erode the integrity of the legal system.

Well-known Cape Town defence lawyer William Booth was shot at during an assassination attempt on 9 April by two armed suspects outside his home in Higgovale, an upmarket suburb at the base of Table Mountain. The gunmen missed and Booth survived unharmed. He has received other death threats.

While reasons for the attempted hit on Booth are unknown, research shows that some lawyers targeted recently might have been pressured to become conduits for corruption, or drawn into disputes over the control of illegal funds or the representation of rival gang members.

Booth rose to prominence in Cape Town as one of the city’s leading criminal lawyers, whose clients included alleged underworld figures. South African media reported that his clients Mark Lifman and André Naudé had criminal involvement in the nightclub security industry.

His attempted murder is the latest episode in a pattern of attacks on criminal lawyers, with five other prominent Cape Town lawyers having been assassinated or having survived assassination attempts since 2016.

Lawyers who defend criminal figures may become vulnerable to violent attack or to being pressured into compromising their professional integrity. The implications for the criminal justice system may be immense.

Research conducted by the Global Initiative Against Transnational Organised Crime in Cape Town and other investigators has revealed that some criminal lawyers get drawn into the gang ecosystem. They can stray into the line of fire after disputes with clients. 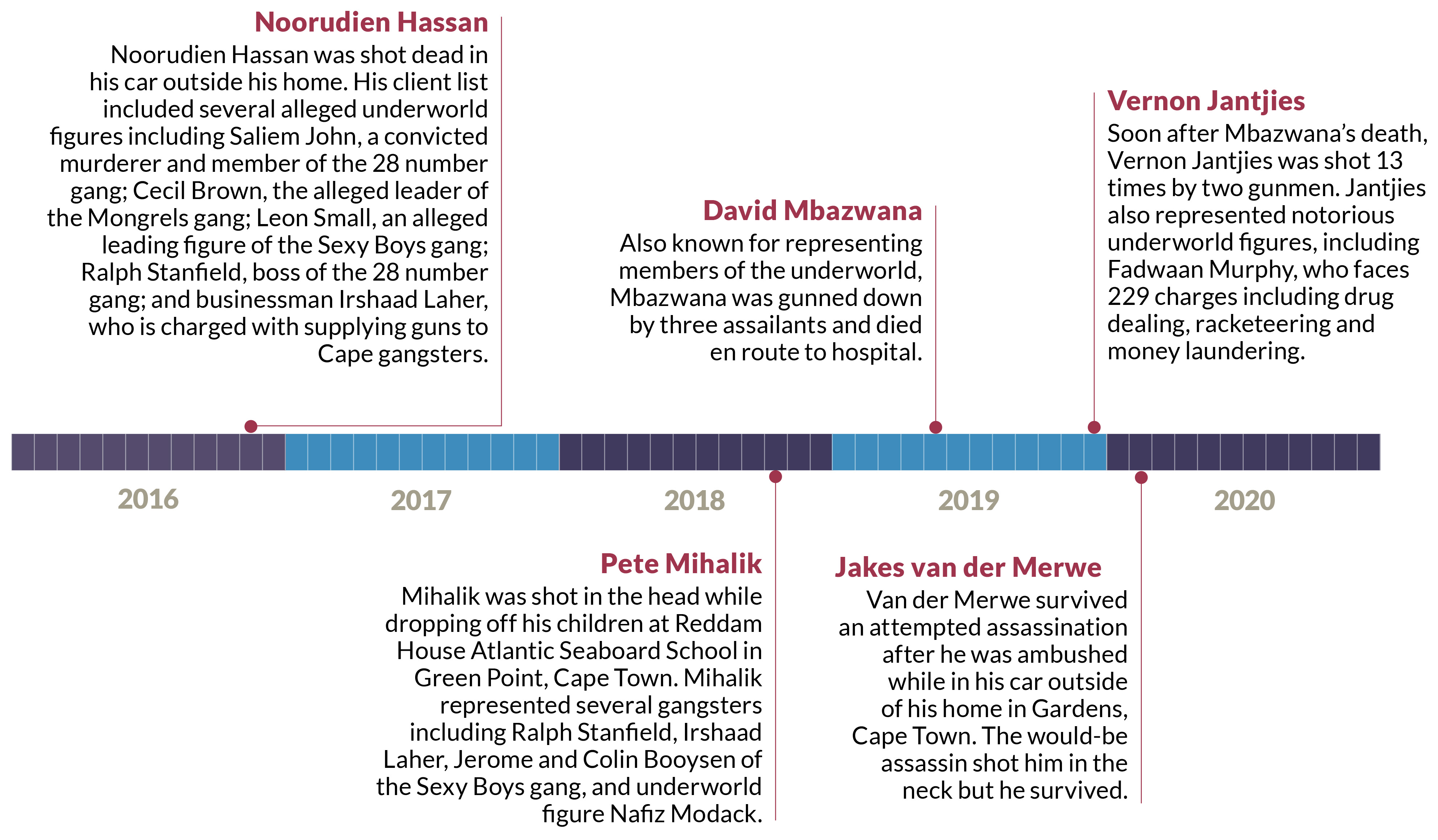 Some lawyers become well known for representing gang members. Following a successful defence of one member, they may become a trusted “go-to” lawyer for other members of the gang. This may be a lucrative business opportunity and help to attract new clients. Some, including Booth, may also become public figures, in part due to the notoriety of clients.

According to a former Cape Town gang lawyer, who spoke to the Global Initiative in 2019, some lawyers work predominantly for gangs because gang members were their first clients and helped them build their businesses; or because that world has been a traditional focus of their family’s legal practise; or because gang leaders pay a retainer (a regular payment in exchange for being available to work as needed), which is very enticing for a young attorney starting out; or because gangsters can afford to pay lump sums up front. Most legal practitioners become involved gradually, but can become rapidly caught up in the underworld as clients recommend them to others or come to rely on them more heavily.

It is lucrative work, but risky. Lawyers may come to know a lot about a client’s business through the steady drip of information they receive and thus become entangled in a web of intrigue that makes them vulnerable.

Attorneys, by the nature of their profession, have access to confidential and sensitive client information. Through their interactions with clients or other contacts, some may come to possess damning information which, if revealed, could have dire consequences.

After the death of Noorudien Hassan, it was discovered that he had access (probably through a senior police official) to a highly secret police intelligence report. This report contained details of an informant linked to Project Impi – a major investigation into gun smuggling in South Africa which revealed how stolen police and military firearms were passed to gangsters – that would likely have sent ripples through gang circles.

Choice of clients may also anger rival criminal groups. Advocate Pete Mihalik represented Ralph Stanfield, the leader of the 28s gang, when Stanfield was charged with assault and intimidation. Mihalik also represented Jerome and Colin Booysen, leaders of the Sexy Boys gang, bitter rivals of the 28s. Disloyalty is not easily tolerated in gangland.

Criminal lawyers may come under pressure from clients to cross ethical and legal lines. This may include becoming conduits for corruption – for example, by delivering bribes to police, or providing safe storage for money and valuable items – which may, ultimately, make them targets.

All attorneys are required to establish trust accounts to hold money on behalf of clients. An attorney is only entitled to access these funds once he or she has provided legal services to, or incurred expenses on behalf of, the client. Often gang leaders with access to large sums of money derived from illegal activities, who do not want to draw attention to themselves, deposit the loot in attorneys’ trust accounts under the guise of it being intended for legal services. Essentially, the attorneys become “gatekeepers” to underworld fortunes.

Laws of the underworld

Over time, gang lawyers may be drawn into the vagaries of underworld politics. The extent to which they themselves are compromised, or the close connections to clients built up over years, may make it very difficult to extricate themselves from volatile situations.

Gangs, frustrated at a lawyer’s unwillingness or inability to fulfil their demands, or disturbed by a lawyer’s representation of rivals, may respond according to the law of the criminal jungle: with violence. Volatile and vengeful, gangs use violence as a key transactional tool and way of exerting power.

Corrosion of the legal system

The fear created by violence and threats of violence can have far-reaching consequences. In a climate of fear, gang-linked lawyers may see no option but to compromise their professional integrity, for example by bribing other members of the criminal justice system.

The effectiveness of an adversarial legal system relies heavily on the ability to trust the integrity of both defence and prosecution lawyers and their teams, and the ability of lawyers to represent their clients or the state without fear or favour. The apparent rise in violence directed at lawyers in South Africa may jeopardise this. DM