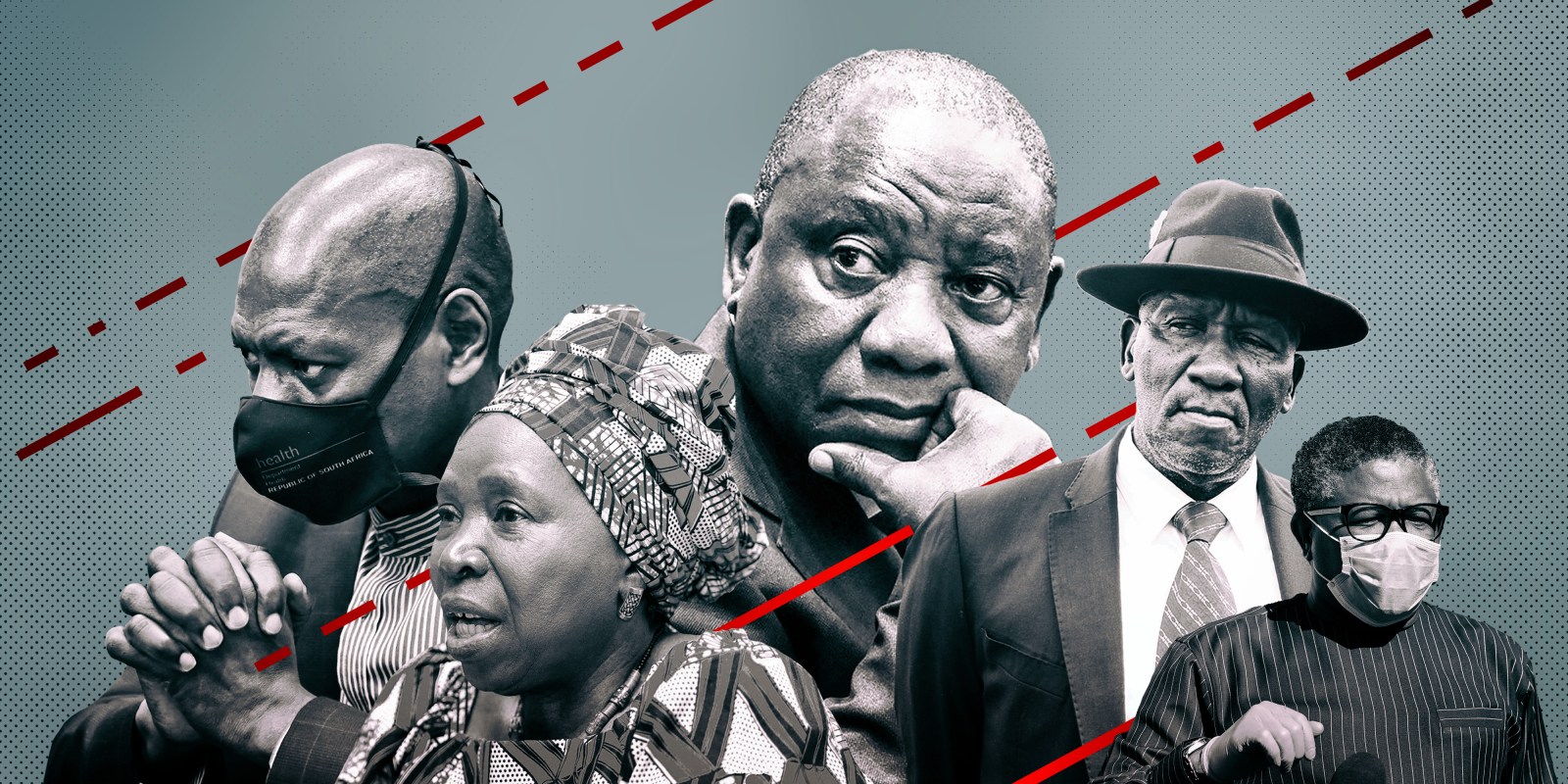 The guardians guard themselves, says the Presidency.

Whenever our political leaders speak of the National Coronavirus Command Council (and they speak of it regularly and clearly enjoy the commanding language it inspires), I think of the American bunker that US presidents and their securocrats sometimes appear in to project televised power. You know, the one full of generals and senior securocrats and lots of big screens and a round conference table across which the commander-in-chief barks orders?

You usually see this in wartime or when, for example, special forces are about to take out a perceived enemy of the regime: It’s patriarchal Western power and, sadly, it’s often copied across the developing world, too.

The National Coronavirus Command Council resonates with the same feeling for this citizen. It’s a command structure; “command” itself is a term of war or battle and of hierarchy, ill-suited to the idea of democracy, servant leadership and public health, all of which this moment of crisis is about.  For flunkies and bureaucrats, it has been abbreviated as the “NCC” and it is clearly a powerful structure given how often they reference it in terms that suggest no questions may be asked or dissent brooked.

It is powerful, but also opaque: nobody knows who sits on it, how it works, how it accounts to Parliament and how it has come to dictate such a large part of our lives. This is not to diminish the fragility of life right now as the novel coronavirus – SARS-Cov-2, or Covid-19 – wreaks havoc here and everywhere, but as authoritarianism infects the virus’s slipstream, there are important questions about democracy to be asked too.

When the State of National Disaster was declared on 15 March 2020 and the command council established, I tried to find out how it worked: it has 19 Cabinet ministers on it and they are joined by their directors-general, the head of the SA National Defence Force Solly Shoke, the national police commissioner Khehla Sithole (though he is completely overshadowed by the police minister Bheki Cele who behaves as if he is a police commissioner too), and a secretariat.

Last week in Parliament, more light was shed on the Natjoints, a structure of the soldiers, police and intelligence who report into the NCC. As Marianne Merten reported, this interlocking NCC with the Natjoints has significant implications for democratic practice as the state and government are now run in structures that are both opaque and without a clear legal genesis.

What is the National Command Council?

On Freedom Day, two advocates, both with long-standing public administration experience, sent a nine-page letter to the Presidency through RHK Attorneys. In it, Nazeer Cassim and Erin-Dianne Richards posed significant questions of democratic virtue in a country that prides itself on being a constitutional democracy.

They asked about the powers of the command council. “It appears that the NCC is exercising at least two forms of power: the first of these being statutory regulation-making powers and the second being executive power of co-ordination and management of the disaster.” South Africa is in a State of National Disaster declared in terms of the National Disaster Act.

Under this law, Minister Nkosazana Dlamini Zuma makes regulations in consultation with relevant Cabinet ministers, but in the public domain, it had been said that the regulations had been passed by the shadowy NCC.

The lawyers added: “On its current composition, the NCC appears to us to constitute a centralisation of power; to the extent that such centralisation is permissible, the NCC would have to be conducting its functions under a lawful delegation from the national executive.”

And the system of government is opaque, argued Cassim and Richards. “Our attempts to locate any official documentation establishing the NCC or providing for a lawful delegation of functions have yielded no results. It appears that such documentation does not exist, alternatively, if it does exist, had not been made publicly available.” The two asked the Presidency whether or not this could taint the legality of the lockdown regulations.

Police and army authority in a state of national disaster are jaw-dropping. Add to it the night-time curfew passed into regulation on 1 May 2020 without parliamentary oversight and the checks and balances of our usually high-class system of governance can eviscerate.

And it is already doing so: capricious arrests, the death of Collins Khosa in Alexandra after being detained and beaten up by soldiers in the township, police violence is now part of our daily fare. The national consensus for the Level 4 lockdown is not as clear as it was for Level 5 lockdown: many sectors of business are unhappy at the pace and scale of opening; the relief measures promised under the state of national disaster often do not work and permit-happy bureaucrats have in instances made it hard for food relief to reach hungry people. The continued ban on the sale of cigarettes and alcohol does not have even full Cabinet support.

There is every chance that there will be legal action against the regulations so the clarity the lawyers sought is vital and their approach was considered. Instead of approaching the courts, they petitioned the Presidency.

“The decision to address this correspondence to you was not taken lightly, and it is now addressed to you in the spirit of cooperation and democratic vigilance. We emphasise that this is not our intention to undermine the government’s response to the Covid-19 pandemic … however, our understanding of the burden you shoulder does not detract from the requirement that all exercises of power must be lawful …”

In effect, the Presidency’s DG Cassius Lubisi fly-swatted away the concerns of the two lawyers, concerns relevant to all democrats. Usually a measured official, able to explain law and process to ordinary people, Lubisi’s response was ill-tempered.

“There are unfortunately seemingly a number of trite principles of our Constitutional democracy that we feel enjoined to set out…,” wrote Lubisi, who revealed that, in his understanding, the grandstanding National Coronavirus Command Council is in fact a very standard inter-ministerial committee established on 15 March 2020, even though it is projected as something different in lockdown discourse.

“No rules exist to direct the Cabinet on how it organises its work to ensure the best possible co-ordination of its members and ideal means of fulfilling their functions. It is this function also that informs the creation and dissolution of Inter-Ministerial Committees, set up where a particular matter requires constant co-ordination or unique co-ordination for a specific project.”

On the question of whether Parliament was being bypassed as an institution of accountability, Lubisi wrote: “The Executive is not responsible for how and when Parliament chooses to exercise its oversight function and cannot direct it to perform its constitutional obligations in whatever manner or at whatever time the Executive thinks is best. Parliament is solely responsible for its own processes.” He added that 17 briefings by Cabinet members had been made to Parliament already.

He added that the NCC had not abrogated regulatory making powers to itself and that Dlamini Zuma had passed the regulations, and that she too was not ruling alone, but acted with relevant ministers in terms of sectoral legislation be it governing transport or home affairs or other areas.

The lockdown alert levels are determined by Dlamini Zuma, acting in consultation with both the Health Minister, Zweli Mkhize and the Minister of Trade and Industry, Ebrahim Patel. Cabinet’s collective power was being practiced in word and deed, wrote Lubisi.

Clearly annoyed at the letter, Lubisi said it “put in jeopardy all measures taken to save South African lives and ensure security of public health and was not commensurate with their position as officers of the court”.

Perhaps the DG has lockdown fatigue, a national affliction that is fraying tempers all over the place. But Cassim and Richards raised important points about who is governing South Africa and what the checks and balances are in a public health emergency, but also in a democracy. DM