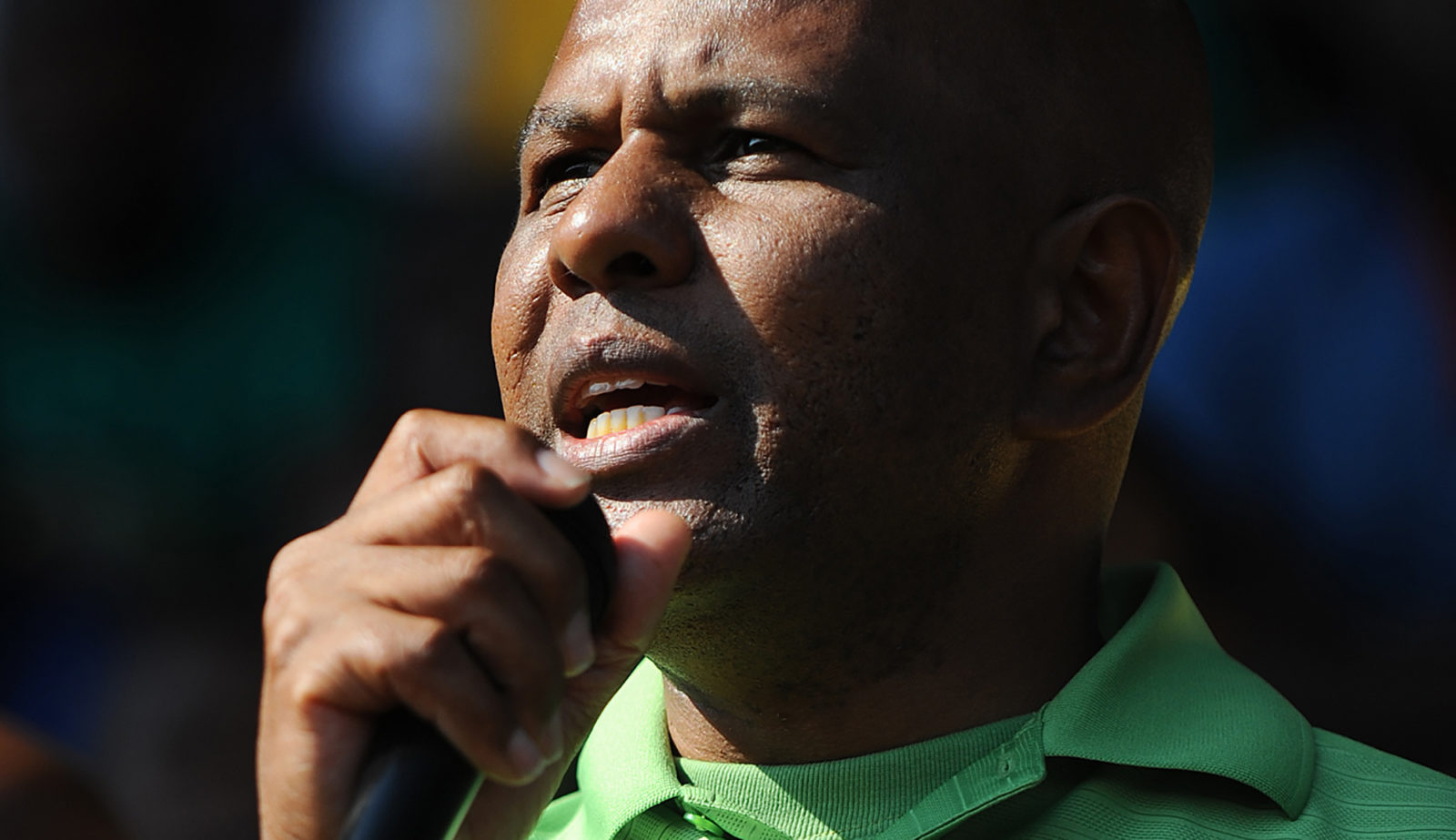 Joseph Mathunjwa, the president of the Association of Mineworkers and Construction Union, knows when to pick a fight with capital. His union’s victory in the Labour Court last week compelling the Department of Mineral Resources and Energy to gazette minimum guidelines for mining companies on managing Covid-19 by 18 May 2020 is a case in point.

Critics allege that Association of Mineworkers and Construction Union (Amcu) president Joseph Mathunjwa does not understand the worlds of business and economics. But he knows when business is vulnerable and when it is not.

Amcu, which now claims 250,000 members according to its website, has matured and mellowed since its explosive rise in the platinum sector. From the violent wildcat stoppage that culminated in the 2012 Marikana massacre to the five-month platinum strike in 2014 to numerous flare-ups between and since, the union established a reputation for hard-edged brinkmanship and militancy.

Shaven-headed and intense, Mathunjwa is a devout Salvationist Christian who sees the world through a prism of African nationalism and class conflict. He shook up the mining industry, but his rank and file also took it on the chin. Pay hikes agreed after the mammoth 2014 strike hardly compensated for the loss of wages over five months, and lay-offs in the sector accelerated, as did a drive to mechanisation.

Last year, Amcu made what now looks like a strategic pivot after a disastrous five-month strike against Sibanye-Stillwater’s gold division that achieved absolutely nothing beyond the impoverishment of its members, who were forced to accept the same deal signed by other unions – with the loss of almost half a year’s wages. Amcu also faced what it called a politically motivated threat from the department of labour to revoke its union status for non-compliance with regulations. Amcu appeared to be on the ropes.

So when platinum wage talks commenced in 2019, Amcu was not in a strong position. The sector, by contrast, was in the best shape it had been in for years after a prolonged period of soaring labour and power costs, depressed prices and bouts of labour and social unrest.

Palladium prices were going through the roof and the pivot to mechanisation for the likes of Anglo American Platinum was literally paying dividends. Profits were surging and balance sheets were relatively robust. In such a setting, Amcu could have pressed for huge wage hikes of 60% or 100% or more. This had been its default position for demands in the past. But it held off.

The union’s rank-and-file clearly had no appetite for a long strike without wages, and the companies were much better prepared to weather such a scenario. The result was wage hikes above the moderate inflation rate at the time – which was running at around 3.7% – but for the most part did not reach double-digit increases.

Mathunjwa, and Amcu, appear to have learned a salient lesson: when capital has the upper hand, don’t go for the jugular.

Now, thanks to the Covid-19 pandemic, the mining industry is on shakier ground. Palladium prices, while historically still high, are down almost a third from the peaks obtained in late February 2020 of over $2,800 an ounce.

Platinum remains in the doldrums below $800 an ounce – if it wasn’t mined in conjunction with other metals fetching a better price, it would hardly be worth the effort to get it out of the ground. Gold in rand terms is at record highs over a million rand a kilo. But the sector overall has been producing at far less than 50% of its output capacity, and won’t meet the lockdown level 4 benchmark of 50% for some time. So its revenue losses outstrip anything that load shedding has dealt it in the past.

And restarting or ramping up now comes with additional costs related to Covid-19 measures. Meanwhile, some companies have paid employees even while they have not been working. Suddenly, balance sheets must be looking a little worse for wear, though the full extent of the damage won’t be clear until financial results start coming out in the middle of the year.

So Mathunjwa took on the industry and the Department of Mineral Resources and Energy at an opportune time when it went to court to demand that minimum Covid-19 guidelines be set in stone in the Government Gazette.

And the issue – health and safety – is one that probably has wide support among its members and the wider public. This would include investors. Environmental, social and governance issues – so-called ESGs – have gained growing prominence in recent years. They are high on the radar screens of investors, which in turn means they have the attention of boardrooms. This is the soft underbelly of capitalism and that is precisely where Amcu struck.

An interim Standard Operating Procedure (SOP) has been agreed in the meantime which provides for minimum standards until the formal gazetting by 18 May 2020. The industry does not seem alarmed by this, the implication being that the protocols and measures are not seen as being too arduous or costly to implement.

Indeed, to its credit, the mining industry has made huge strides on health and safety fronts in recent years, so the two sides were probably not that far apart on this issue. The industry must consult with all stakeholders including Amcu’s medical experts as the final guidelines are worked out.

Agreement looks likely at this point, which will also be a victory for Amcu and Mathunjwa, which have used the judiciary – still a widely respected branch of government – to advance their aims. It also means that wide consultation must take place, which must surely also be welcomed at this time. That may even help to nip potential social unrest in the bud.

Focusing in the age of Covid-19 on health and safety, with prominent human rights lawyer Richard Spoor arguing its case in court, was a masterstroke. Spoor, of course, spearheaded the class action suit against the gold industry on behalf of miners who contracted the dreadful disease silicosis from inhaling silica dust from gold-bearing rocks. That R5-billion settlement is the elephant in mining boardrooms – the industry does not want to screw this up.

And Amcu is not the only union that has aired concerns about the mining ramp up and reboot. The National Union of Mineworkers (NUM) has also raised red flags and gone so far as to pointedly criticise Mineral Resources and Energy Minister Gwede Mantashe, who once led the union. But to paraphrase Jacob Zuma, a certain widely admired religious figure will probably return before arch-rivals Amcu and NUM go to court together in a common cause.

Mathunjwa has shown a new strategic sense on this issue. He knows when he should take on business head-on, and when to negotiate. Stay tuned for his next move. The Covid-19 pandemic is far from over, and the mining sector remains vulnerable. BM