Overlooking the missing millions – another ‘stain on our national conscience’ 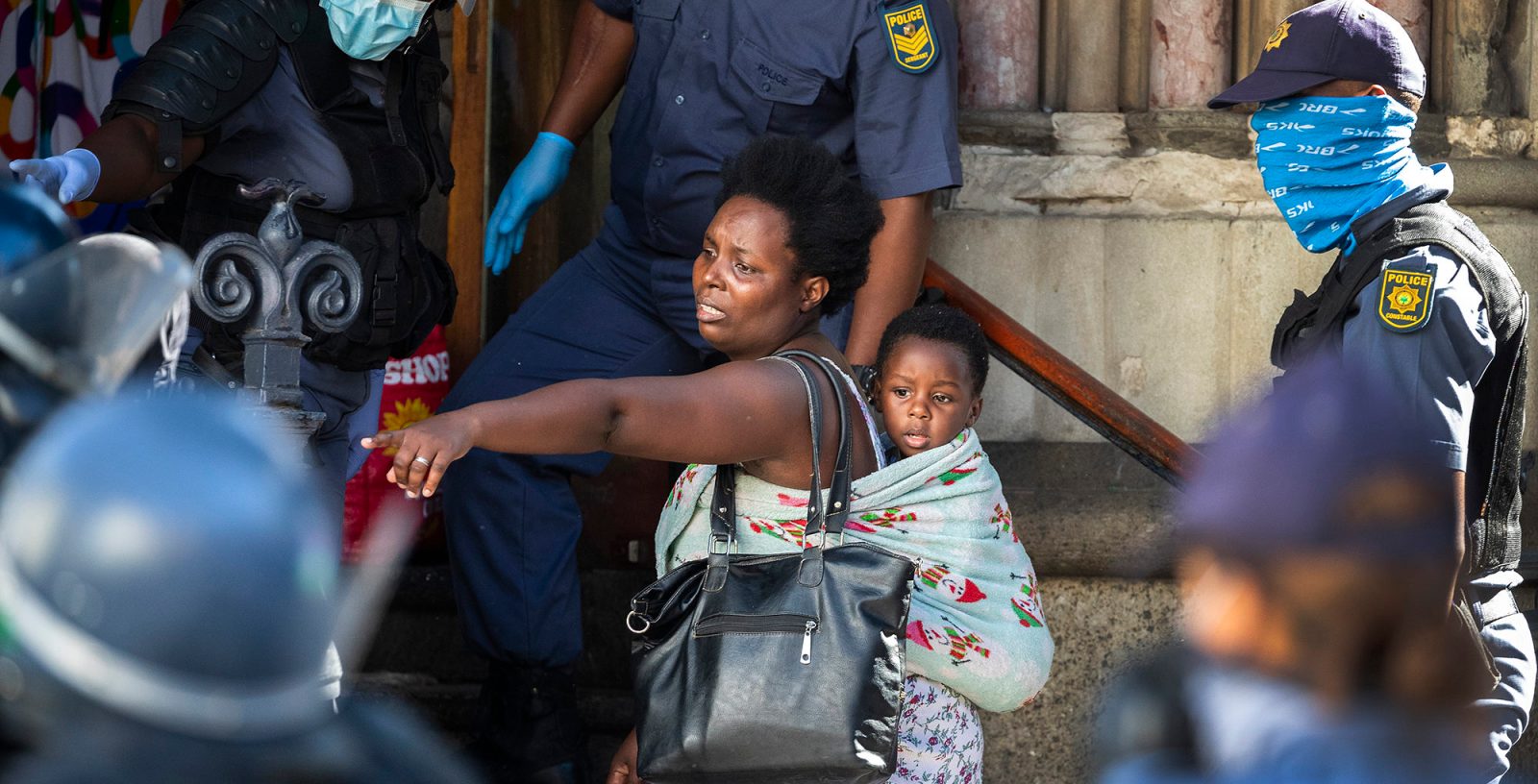 A mother and child, part of a group of undocumented nationals from various countries, are moved by South African police out of the Central Methodist Church where they had taken refuge since October 2019, in Cape Town. (Photo: EPA-EFE/NIC BOTHMA)

In the last few weeks it has often been said that SARS-Cov-2 is a virus that knows no boundaries – be they national, socio-economic, class, race or ethnicity. Although Covid-19 the disease has malicious preferences for the elderly and those with pre-existing conditions, the virus itself doesn't discriminate in its infectiousness. If you are a human being, you are at risk. It’s a great leveller of artificial denominators based on class, gender and colour.

Sadly, however, judging by both our public health and socio-economic responses to Covid-19, it seems that humans do discriminate. Even more troubling is the fact that the South African government, which has won accolades as a global leader in a science and human rights-based response to the pandemic, is scoring little better than the Trumps and Johnsons when it comes to ensuring the protection of migrants and refugees from both SARS-Cov-2 and its economic impact.

Over the last few weeks one of the most haunting sounds I have heard has been the cries of hungry, sometimes starving, migrant communities pleading for access to food. I see it on WhatsApp groups. I hear it in conversations. It is expressed in an anonymous article by an Ethiopian refugee we published today. This long weekend a crisis hotline (066 076 8845) run by public interest legal organisations received over 100 calls from “refugees, asylum seekers and migrants begging for food parcels”.

Anecdotal evidence suggests that hunger and income deprivation are not the criteria for receiving food parcels – rather it is a South African ID or proof of permanent residence.

Among some ‘foodlords’ there seems to be almost a pleasurable vindictiveness in denying food to non-South Africans.

“Serves you right, go home,” is the subtext.

Similarly, when it comes to strategies for income relief or support to small business, members of the Cabinet have been explicit and unabashed about unfairly limiting benefits to South African citizens. Recently, Finance Minister Tito Mboweni told a press conference that “any establishment wanting to open must have a new labour market policy which prioritises South Africans”.

Based on discussions I have had with a number of small business owners in Johannesburg, it seems that it is going to be extraordinarily difficult to re-employ migrant workers after the immediate Covid-19 crisis has passed.

Maverick Citizen has also received reports of banks closing accounts of asylum seekers because their 30-day permits have not been renewed – an impossibility when Home Affairs offices are closed. This is an issue we would expect Minister Aaron Motsoaledi to address as part of a clear and fair plan to help migrants and refugees navigate the lockdown regulations.

By such means, we witness the return of the dompas where a pandemic is being used to root people without IDs out of employment.

Finally, there is little evidence and no reassurance (yet) that the public health response to Covid-19 embraces everybody in South Africa. The form used by the NHLS for Covid-19 testing, and thereafter, when necessary, contact tracing, requires a South African ID or passport number. Is this an omission or does this mean that if you have neither you will not be tested if you can’t pay? Tell us – is screening and testing going to include communities made up primarily of scared illegal migrant workers and refugees? Will it be done without prejudice or stigmatisation?

Everyone is at risk, everyone is potentially infectious, therefore it is both a public health and human rights issue that all communities in South Africa are embraced and treated without fear or favour.

A new group on Twitter, going under the hashtag #SouthAfricaFirst, perhaps set up with good intentions, is now attracting thousands of vitriolic followers who seem to feel that way. After all, they say, many of ‘these people’ are illegal and our bankrupted state does not have limitless resources. Triaging a limited supply of food parcels to South African citizens is surely justifiable in the circumstances?

The Bill of Rights in our Constitution, rightly the pillar that President Cyril Ramaphosa has leant on in the past two months, says “everyone” has a right to “sufficient food” and “social security”. “Every child”, too, has the right to be protected. As pointed out last week by the Secretary General of the UN in our responses to Covid-19, South Africa must follow international best practice and human rights law, including – we should add – laws and norms developed under the auspices of the African Union, which Rampahosa currently chairs.

Some claim, and others contest, that we should treat ‘foreigners’ with respect because that is how we were treated when tens of thousands of South Africans were forced into exile. Others retort, “Yes, but we were kept in camps, and so should they be.”

Both arguments miss the point.

Migration and population movement is a fact of 21st century life that we must accept, plan and budget for. Just as with globalisation, there’s now no unscrambling the egg. It is made worse by inequality. It involves hundreds of millions of people. In the words of World Bank economist Branko Milanovic (quoted by writer Paul Mason in his book PostCapitalism A Guide to Our Future) “either poor countries will become richer or poor people will migrate to rich countries”.

That’s a fact and no wall or fence will stop it.

But in our part of the world the problem has also been successive ANC governments’ penchant for bonhomie with undemocratically elected dictators like Manangagwa, Mutharika, Mswati and Lungu. Solidarity and diplomacy with kleptocrats is exacerbating the inequality crisis in many of these countries; driving their citizens to what they hope are greener pastures – but which often turn out to be nightmares.

Recognising this, what we need to see is humanism not nationalism; empathy not exclusion. Unfortunately these values are once again being left to non-government non-business sectors, in other words, those with the least resources. It is being left to organisations like Lawyers for Human Rights, CORMSA, Community Action Networks and the efforts of individuals and small CSOs to plug this gap.

There is much talk of a post-Covid-19 reset that recognises the need to fight inequality. On Monday President Ramaphosa’s Freedom Day speech lamented that “the circumstances of one’s birth largely determines where and how we live, where we study, where we work and where we are cared for when we are sick”. He called this “the greatest form of injustice” and “a stain on our national conscience”.

Bravo. Quite right. But surely this also applies to how we treat refugees and migrants. This is why the “great reset to fundamentally change our society” will have to extend to our foreign relations and values.

And that is why we plead for leadership from Ramaphosa on this crucial issue. Only he, together with his ministers, leaders from business, trade unions and faiths, have the capacity to change the narrative. As is happening in a few places in the world, we should view migrants as assets, not burdens; guests, not intruders. It may not be popular, but it’s right and necessary.

In this time of crisis, let’s extend our compassion and resources to those in the most desperate need.

We will all be safer and better for it. DM/MC