Insights from the data: SA’s Covid-19 testing rates increasing, but can be inexpensively scaled up 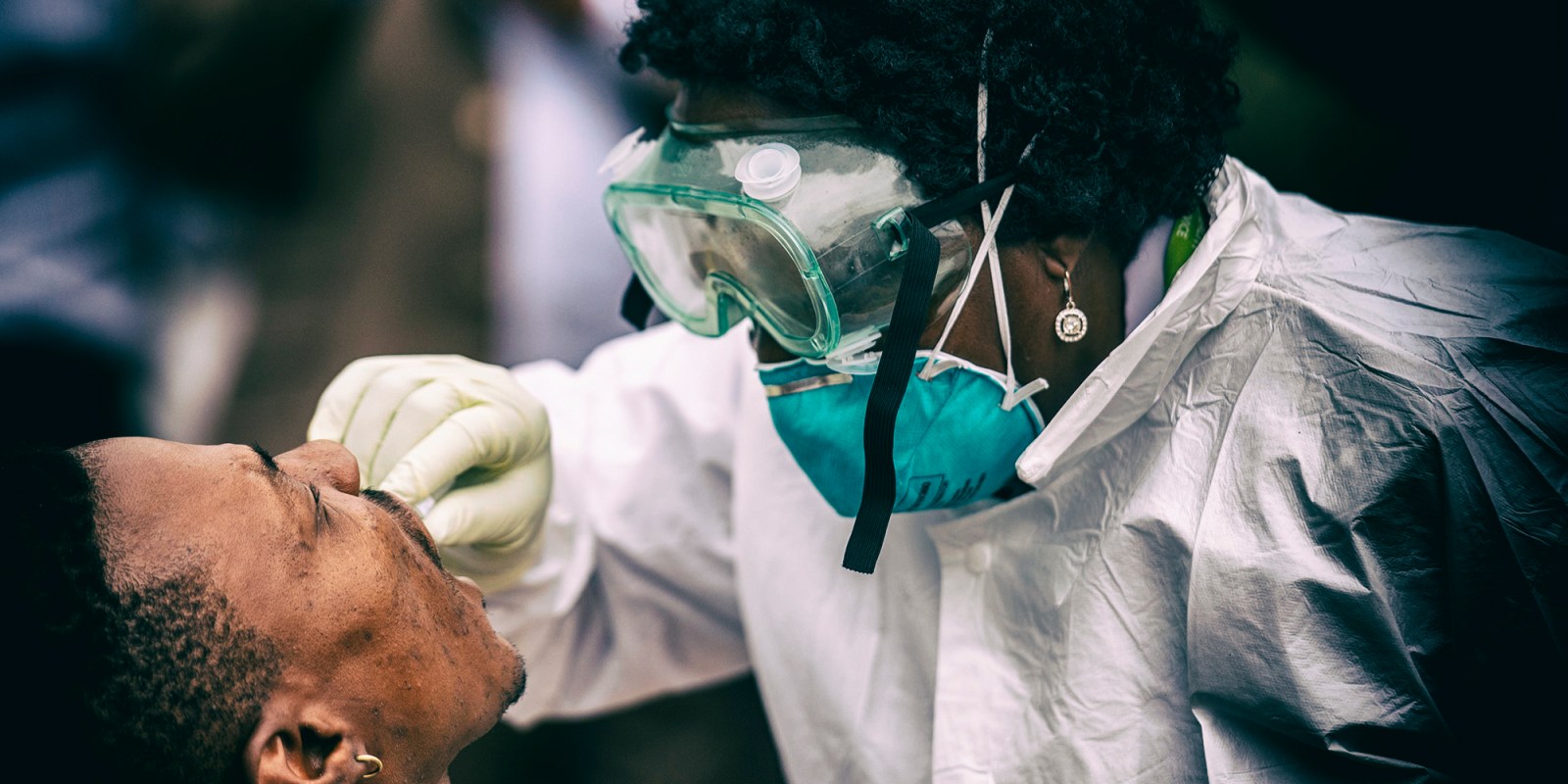 The Gauteng government deployed a team of health workers to the Stjwetla informal settlement to test people for COVID-19 on day 5 of National Lockdown on March 31, 2020 in Alexandra, South Africa. (Photo: Alet Pretorius/Gallo Images via Getty Images)

As South Africa ramps up testing for Covid-19, lessons can be learnt from Vietnam and China, where inexpensive artificial intelligence screening has been deployed on a massive scale.

As South Africa enters its fourth week of lockdown it is important to assess the nature of testing in the country and identify trends to inform better decision-making.

It should be noted that no country knows the exact number of people that have contracted the virus within their borders. The only indicator is the infection status of those who have tested positive. Additionally, it is worth noting that the cumulative number of tests as well as confirmed cases are not the aggregate number of people who have been infected by the virus. While there is no way of ascertaining the aforementioned, data on testing provides a strong indication on the quality of a country’s data as well as the spread of the virus. 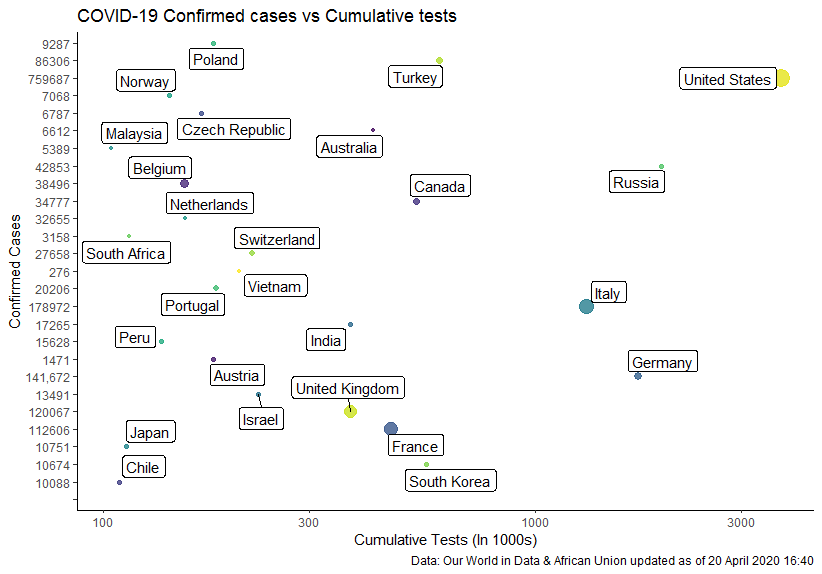 Figure 1 above provides data on Covid-19 confirmed cases and cumulative tests. The former is important as it provides insight on the global spread of the virus. The size of the bubble in the chart represents the number of deaths per country, meaning the larger the bubble the higher the number of deaths. Ideally, higher testing equates to greater accuracy on the infection status of a country. According to the figure above, the United States has the highest number of tests conducted anywhere in the world with more than 3.7 million tests conducted to date followed by Russia with 1.95 million, Germany with 1.73 million and Italy with 1.31 million.

While the US and Italy have some of the highest cumulative Covid-19 tests in the world, they also have some of the highest numbers of deaths. This can be explained by a prioritisation of the US economy over human life exacerbated by President Donald Trump’s unwillingness to let medical experts set policy to combat the pandemic. Hence the high number of deaths and confirmed cases in the country.

In Italy, the deaths can be attributed to an ageing population. In South Africa, while the cumulative number of tests is not the highest in the world, the country has managed to keep deaths and confirmed cases at a minimum as a result of two very effective measures, namely early lockdown and very strict social distancing as advised by medical experts in the country. This highlights the stark difference between South Africa— which has let medical experts inform policy on the pandemic — and the US, which has alienated medical experts in pandemic policy.

While a deficit in Covid-19 tests contributes minimally to South Africa’s paradoxical trajectory, Professor Salim Abdool Karim suggests that this is due to a genuine effect of reducing the probability that test deficits have caused a facade flattened curve. This illustrates the reliability of South Africa’s Covid-19 data which has been ranked second in the world for reliable Covid-19 news and information (after Singapore) according to Covid-19 infodemics Observatory.

The platform utilises nine main categories of scrutinising news and data to assess reliability with a focus on science and mainstream media as definitive sources of reliable data, while conspiracy, fake/hoax and clickbait among other categories, are viewed as unreliable. The United Kingdom and Northern Ireland rank 20 while the US ranks 35 in the index.

To better understand some of the dynamics influencing South Africa’s cumulative tests as well as elsewhere in the world, a brief analysis using GDP per capita as an independent variable and cumulative tests as a dependent variable was conducted where a relatively low-positive correlation coefficient of 0.17 was identified as per current data. While the relationship between the two variables is somewhat substantial, contributing to South Africa’s cumulative tests is a disruption in the global supply chain as the virus has curbed international trade.

Additionally, South Africa’s efforts to find a balance between the economy and the populace’s health by assisting businesses with relief packages to preserve their financial integrity while simultaneously testing the populace has had an impact on testing rates facilitated by the country’s moderate GDP per capita of $6,374.03. However, these have increased significantly over the past few days and are expected to continue increasing as the government steps up testing efforts to better gauge the status of Covid-19 in the country with a focus on hotspots with available resources. 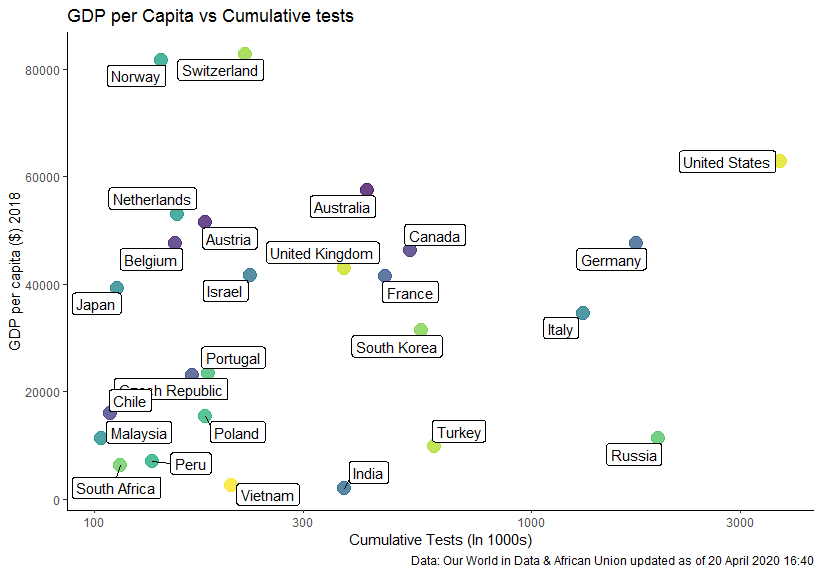 Figure 4 below illustrates the relationship between tests for Covid-19 per 1,000 people and GDP per capita. A correlation test resulted in a strong correlation of 0.67 illustrating that the world’s Covid-19 testing capacity is mostly influenced by countries’ standards of living. 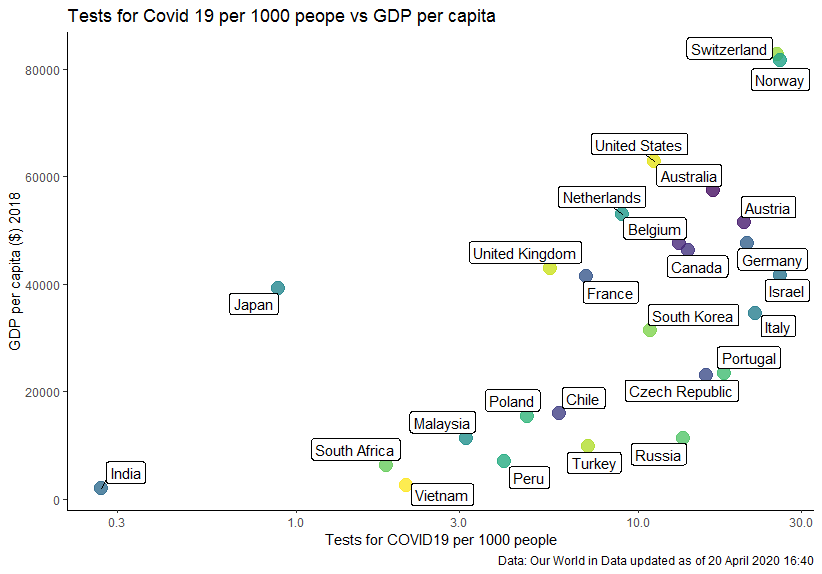 In South Africa, a testing rate of 1.84 per 1,000 people (an increase of 6% from the previous day) ahead of Japan’s testing rate of 0.84 per 1,000 people is not only influenced by the country’s GDP per capita, but also its rampant socioeconomic issues such as poverty, unemployment and inequality, hence the balancing act between the economy and populace health implemented by the government. However, this testing rate is projected to change as the government steps up its testing efforts to swiftly address the pandemic. 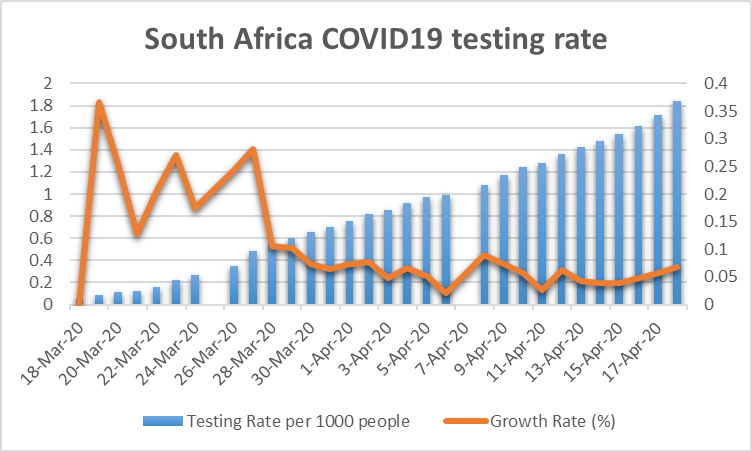 Figure 5 above shows that between 18 March 2020 and 18 April 2020, South Africa’s testing rate increased from 0.05 per 1,000 people to 1.84 per 1,000 people. This is an average testing rate increase of 11% through the period of analysis. To enhance its testing rate efforts, South Africa with 114,711 tests conducted to date can learn from Vietnam, a country with a GDP per capita of $2,566.60, which is less than half of South Africa’s GDP per capita, but whose cost-effective strategies to curb the spread of the virus has yielded great success.

To date, Vietnam’s government-citizen co-operation and technology has resulted in more than 206,000 tests conducted since 23 January with only 276 confirmed cases and zero deaths. The success of the country’s efforts to combat the pandemic can be attributed to artificial intelligence (AI). One such AI is an audio screening system launched by Ping An Smart Healthcare. The system conducted more than 500,000 screenings in Wuhan province in China, enhancing tracing, testing and treating in that country.

Such an inexpensive system can be implemented in South Africa as well as the rest of the continent while the situation still allows it, so as to complement current efforts by enhancing tracing, testing and treating as human operators can only process so many screenings per day. Similar to the aforementioned audio screening system, South Africa’s audio screening AI can have an automated dialogue with pre-installed Covid-19 symptom questions that can be used to categorise and structure results for risk assessment and relay the results to relevant authorities who will accurately trace symptomatic residents and test them.

This will enable authorities to trace and test suspected cases quicker, enabling them to reach a broader sample of the populace. Additionally, to further enhance testing in South Africa, a collaborative testing effort by companies that are starting to recommence operations as government relaxes restrictions may need to be implemented voluntarily to minimise a surge in confirmed Covid-19 cases and facilitate normalcy. DM