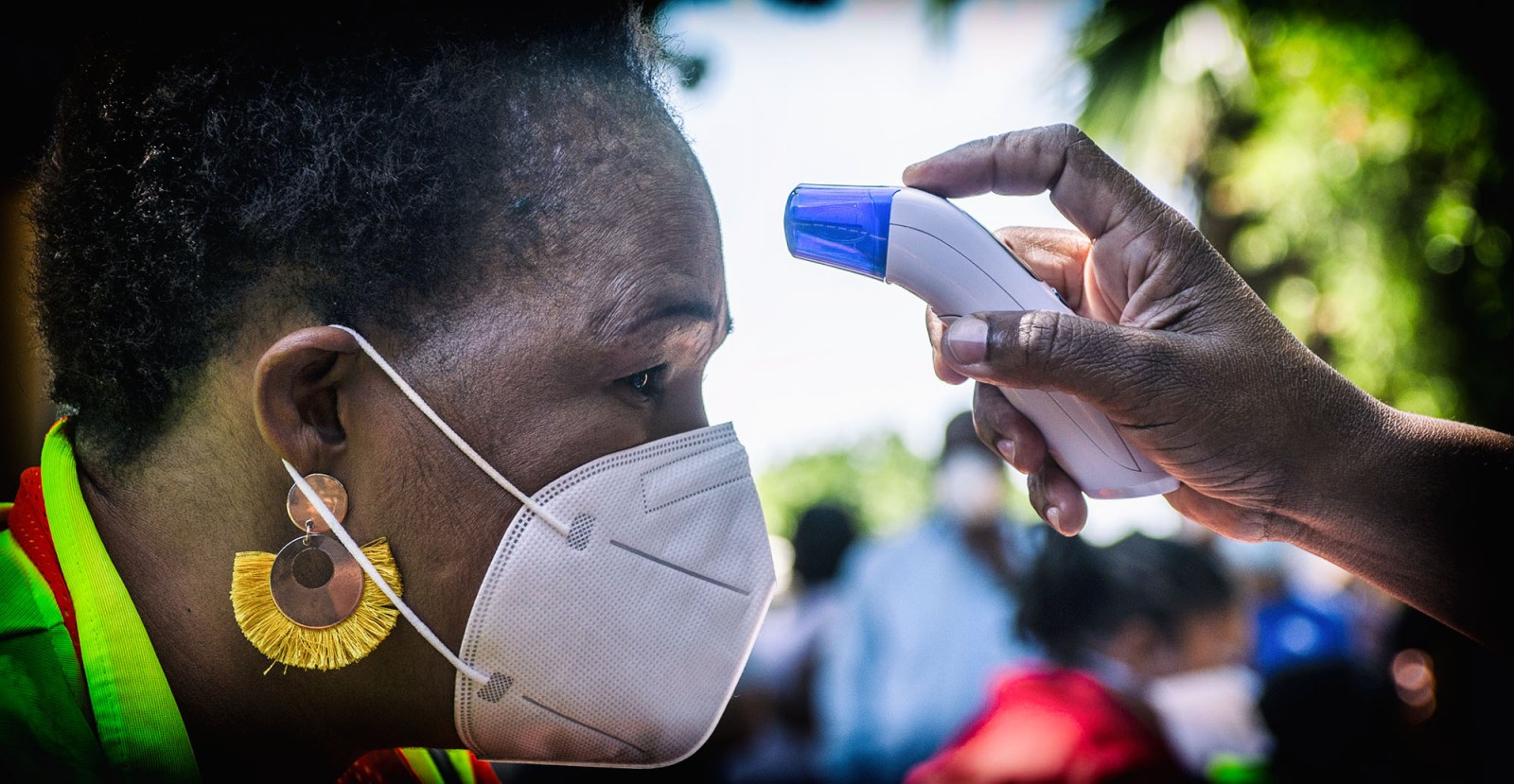 A resident wearing a protective face mask has her temperature scanned during a health screening in Rustenburg. (Photo: Waldo Swiegers / Bloomberg / Getty Images)

An analysis of the data shows that in contrast to the rest of the world, South Africa’s efforts to flatten the Covid-19 curve are nothing short of world-class, attesting to the advantage of a timely implementation of physical distancing and a lockdown to curb the spread of the virus.

The two-week lockdown extension in South Africa comes at a time when the country has become the epicentre of Covid-19 in Africa with 2,173 cases, the highest number of cases reported on the continent. This figure should not be regarded as a cause of concern, but rather be viewed in the context of transparency facilitated by the country’s advanced healthcare system, which may not be the best in the world, but is a pioneer in the African landscape.

The fight against the virus in the initial phase of the lockdown has been positive overall with South Africa’s measures to reduce peak caseload (flatten the curve), successfully curbing the spread of the virus attesting to the excellence of the country’s team of experts coordinating the fight against Covid-19.

In contrast to the rest of the world, South Africa’s efforts to flatten the curve have been nothing short of world-class coming in second to Algeria, attesting to the advantage of implementing physical distancing and lockdown measures in a timely manner to curb the spread of Covid-19. This is illustrated by Figure 1. According to the graph, Australia ranked third, Japan ranked fourth and Russia ranked fifth. The public health measures implemented by these countries have been tremendously successful thus far in flattening the curve, though Russia has not yet achieved the aforementioned as it continues to experience an upward though controllable trend in its trajectory. 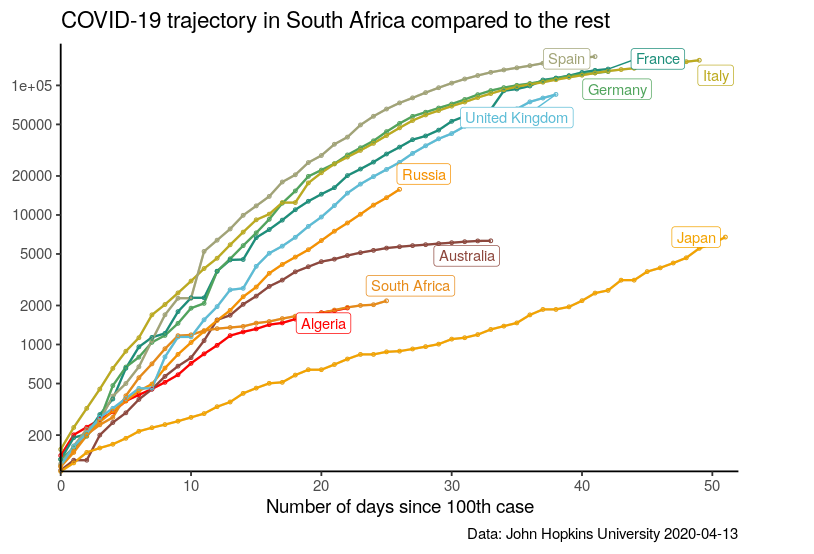 In the context of case fatality rates, countries with the highest number of Covid-19 cases are high for some countries and low for others. Algeria is currently the most affected country on the continent with a case fatality of 15.31% followed by Egypt, Morocco and Cameroon with case fatality rates of 7.49%, 7.15% and 1.46% respectively. South Africa ranks fifth in the sample of countries with a case fatality rate of 1.19%, which translates to how many of those infected with Covid-19 will die as a result thereof. Given that no vaccine has been developed yet for the virus, South Africa’s case fatality alludes to a responsive health sector with the capacity to attempt treatment thereof and save as many lives possible as illustrated by the country’s Covid-19 recoveries, which currently stand at 410. In statistical terms, this translates to a case recovery rate of 18.05% as per current data.

The aforementioned deaths and high Covid-19 cases in Figure 2 for the majority of countries in the sample can be explained by Figure 3 below, which illustrates a correlation between old age and susceptibility to Covid-19 alluding to possible fatality as a result thereof. According to Figure 3, Algeria, Egypt and Morocco have the largest population of old people in Africa, which would explain why they have the highest mortality rates in the sample. The same has been seen with Italy, a country with 23.1% of its total population estimated to be 65 years of age and older, and also one of the worst-hit countries in the world. 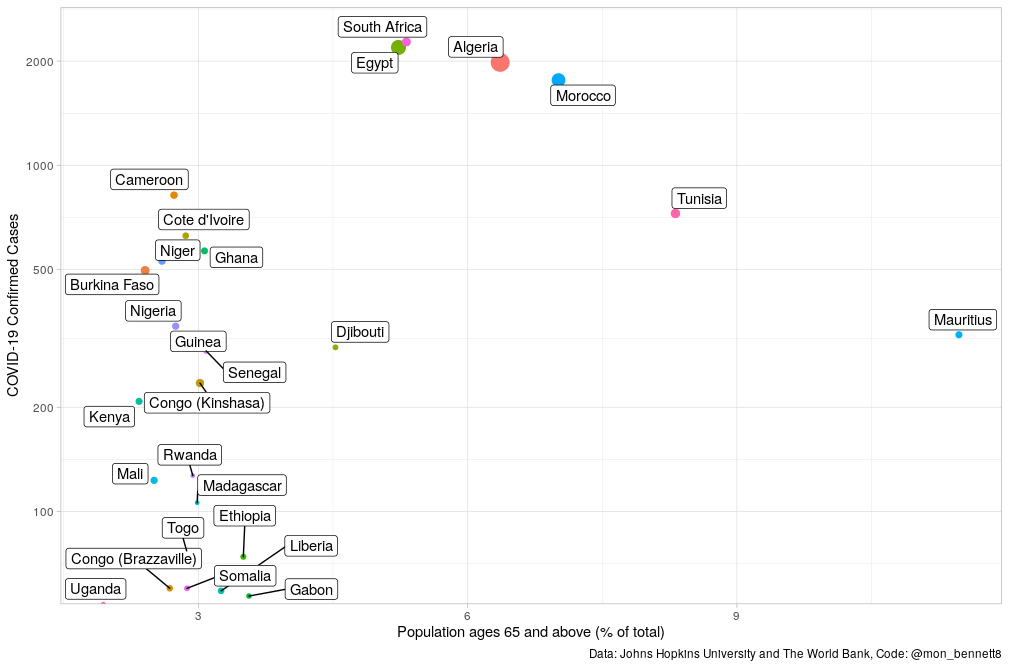 Arguably, the most important indicator in assessing South Africa’s approach to the pandemic is “active cases” which many governmental bodies, both domestic and pan-African, have failed to publicly release alongside their confirmed case statistics which are abundantly available. This is problematic as it undermines the tremendous efforts that healthcare workers are tirelessly putting in to curb the spread of the virus as well as to treat those who have been infected.

It also undermines the measures that the South African government has put in place to achieve the aforementioned and facilitates panic as the populace continues to see a rise in cases, though gradual. Figure 4 below provides a contrast of the country’s confirmed Covid-19 cases and active cases.

The graph shows that while the number of “confirmed cases” has been increasing in South Africa (currently 2,272 cases), so has the fight by health workers to reduce these numbers by treating those infected as depicted by the active cases (currently 1,835 cases), in the graph.

The latter provides a more accurate depiction of the country’s Covid-19 situation and the efficiency of its measures in response to confirmed cases. It does this by removing the total number of recoveries and deaths from the cumulative number of confirmed Covid-19 cases, which are currently 410 and 27 respectively as they no longer constitute as positive Covid-19 cases. 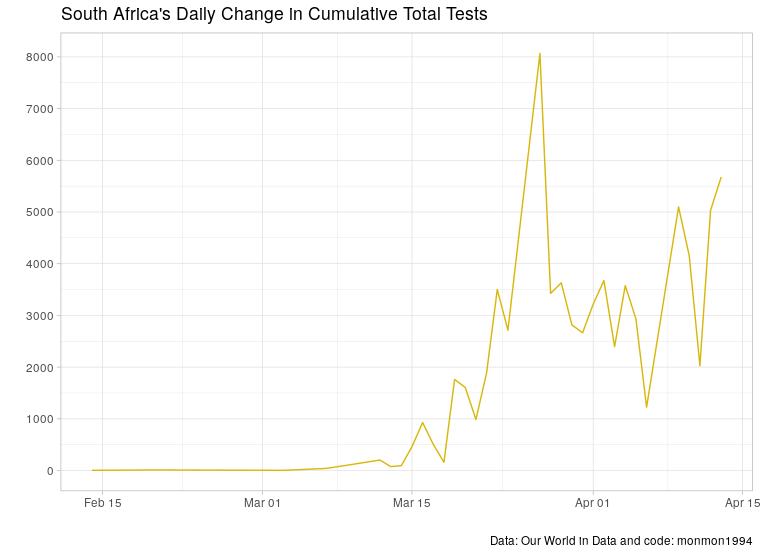 Although we are still below the target of 10,000 tests per day, overall testing in communities has gradually increased and we are currently on an average of 5,678 tests per day. Professor Salim Abdool Karim, Chairperson of the Covid-19 Ministerial Advisory Committee, advised South Africans on why the lockdown will assist the healthcare system to prepare for what will be an inevitable rise in cases. Since the lockdown, 28,000 community healthcare workers have been deployed in vulnerable communities to screen and test individuals. “Active” case findings are vital if we are to identify where the community transmission is taking place. This allows the government to intervene before community transmission takes place. A similar strategy was conducted in South Korea (Trace, Test and Treat), which helped flatten their curve. The difference is South Africa’s lockdown came much earlier and has bought the healthcare system some valuable time to prepare hospitals, staff and community clinics for a worst-case scenario. DM