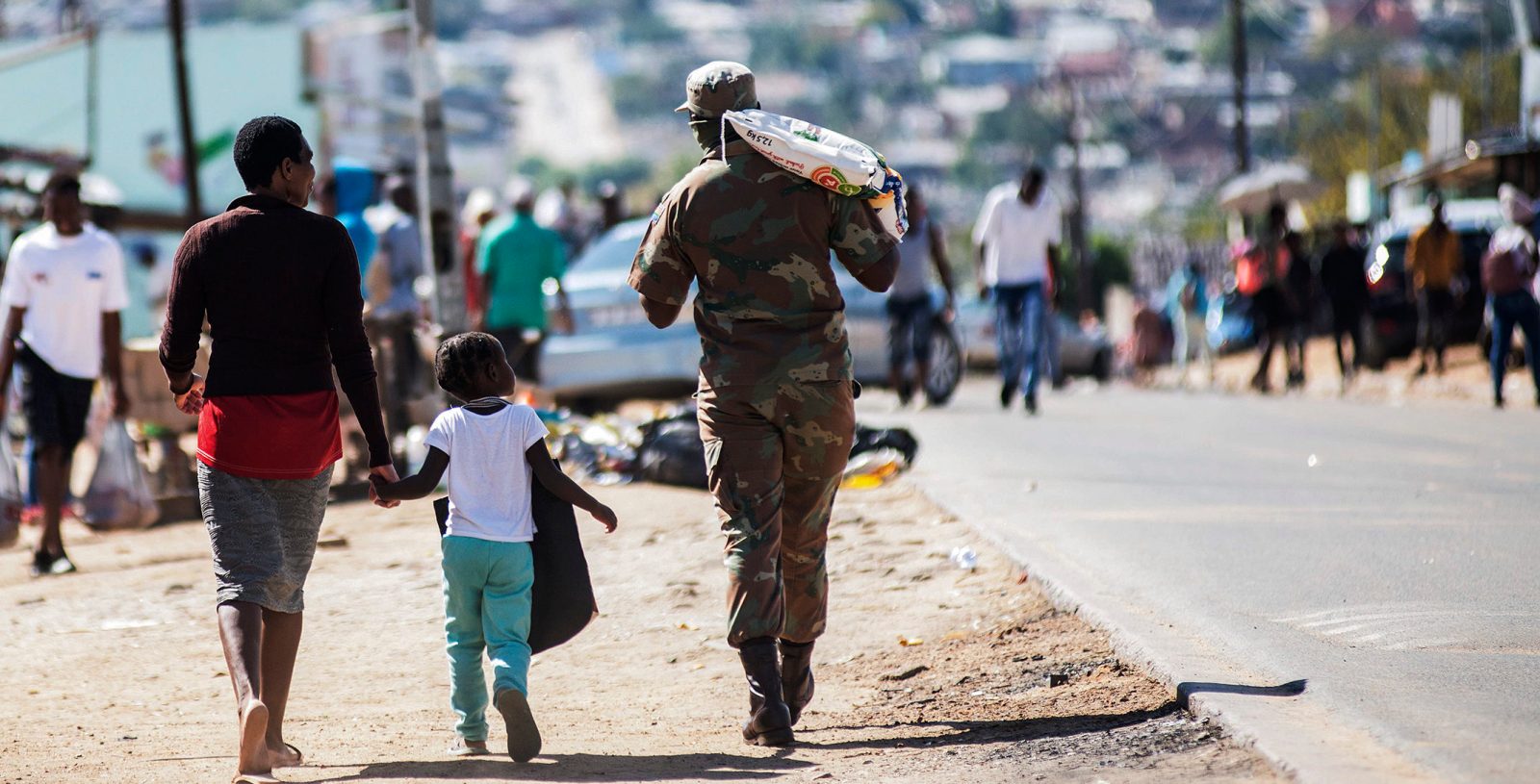 Members of the SANDF helps a family, mom and two daughters, carry a heavy bag of mielie meal to their Diepsloot, Johannesburg home on April 16. (Photo: Gallo Images/ER Lombard)

South Africa’s last great viral epidemic started in the early 1980s and is still with us today. But with HIV, unlike with SARS-CoV-2, we wasted 20 years before we found consensus on the need and means to fight HIV. We faced a government, under President Thabo Mbeki, that sought to disable the response and throw into question the science.

The history of AIDS in South Africa is one of polarisation and division. Civil society, especially the Treatment Action Campaign, was deemed an enemy of the state.

As a result of government leadership in key areas, although not all, over the last four weeks, ‘business unusual’ has become not just a phrase but a practice.

In particular, the attempt to build a response to stop Covid-19 has again seen the power of organised people, operating across tens of thousands of not-for-profit organisations.

Here, too, there has been a change: instead of working in silos people have joined forces in coalitions for action.

The C-19 People’s Coalition has over 250 organisations and 20 working groups. It combines activists, economists, educationists and academics. It’s a reserve bank not of money but of knowledge and ideas, societal systems and connections, intuition and imagination, energy and dedication. Community Action Networks (CANS) have been established in Cape Town, Gauteng and the Eastern Cape. The South African Council of Churches (SACC) is establishing Local Ecumenical Advocacy Networks (LEANs).

In addition, individual organisations and people operate on numerous fronts, but tailor their activities to the immediate challenge.

This is just the tip of the iceberg.

As envisaged by our Constitution, the people are leading and – some of the time – the government is responding to our signals and behaving like a servant of the people, not its master.

Gauteng Premier David Makhura, speaking at the launch of the Gauteng CAN, said that “we want to embed the state into the CANs, not the CANs into the state” and appealed to activists to “help the state act in the true interests of the people”.

On such a basis, the South Africa struggle can once more become the envy of the world, a social justice nation to be looked up to and emulated. We must not waste or blow this opportunity.

The situation is now extremely fragile. We await with trepidation President Ramaphosa’s announcements tonight on social relief, increasing grants and other measures. We expect them to be bold.

After the speech, if the government and civil society don’t move urgently and with precision in ensuring that everyone has access to sufficient food, water and social security over the next 48 hours, all the good can be undone. The C-19 People’s Coalition and others have mapped the most urgent hunger spots. This is the time to work with civil society and the Solidarity Fund.

There is a real risk that a single police or army massacre of hungry and angry people will poison our whole response. As we have seen already with unlawful evictions and abuses by the police and SANDF, the move by some provinces towards securitisation of Covid-19 prevention, as just announced in KwaZulu-Natal, will divide people in South Africa.

That will open the door to populists and corrupters, people who see an opportunity in the Covid-19 crisis. These are the politicians and people who steal food parcels, smell self-enrichment in the millions of rands going to relief efforts and quickly draw up fake funding proposals – people who are threatened by common purpose and unity and spread fake-news to disrupt it – people who join genuine efforts at collaboration to spew populist rhetoric aimed at division.

So the key message the country has for the president and the government now is:

If we are prepared to disrupt the normal rules of the economy to fight Covid-19, we should be prepared to do the same to fight inequality. In fact, it will prove much less expensive.

Take the necessary measures now to increase equality and build the future in the present. There is no blank cheque, but if you do the righteous thing the vast majority in South Africa and the world will line up with its support. DM/MC