Hunger rages as SA told lockdown lift will be incremental 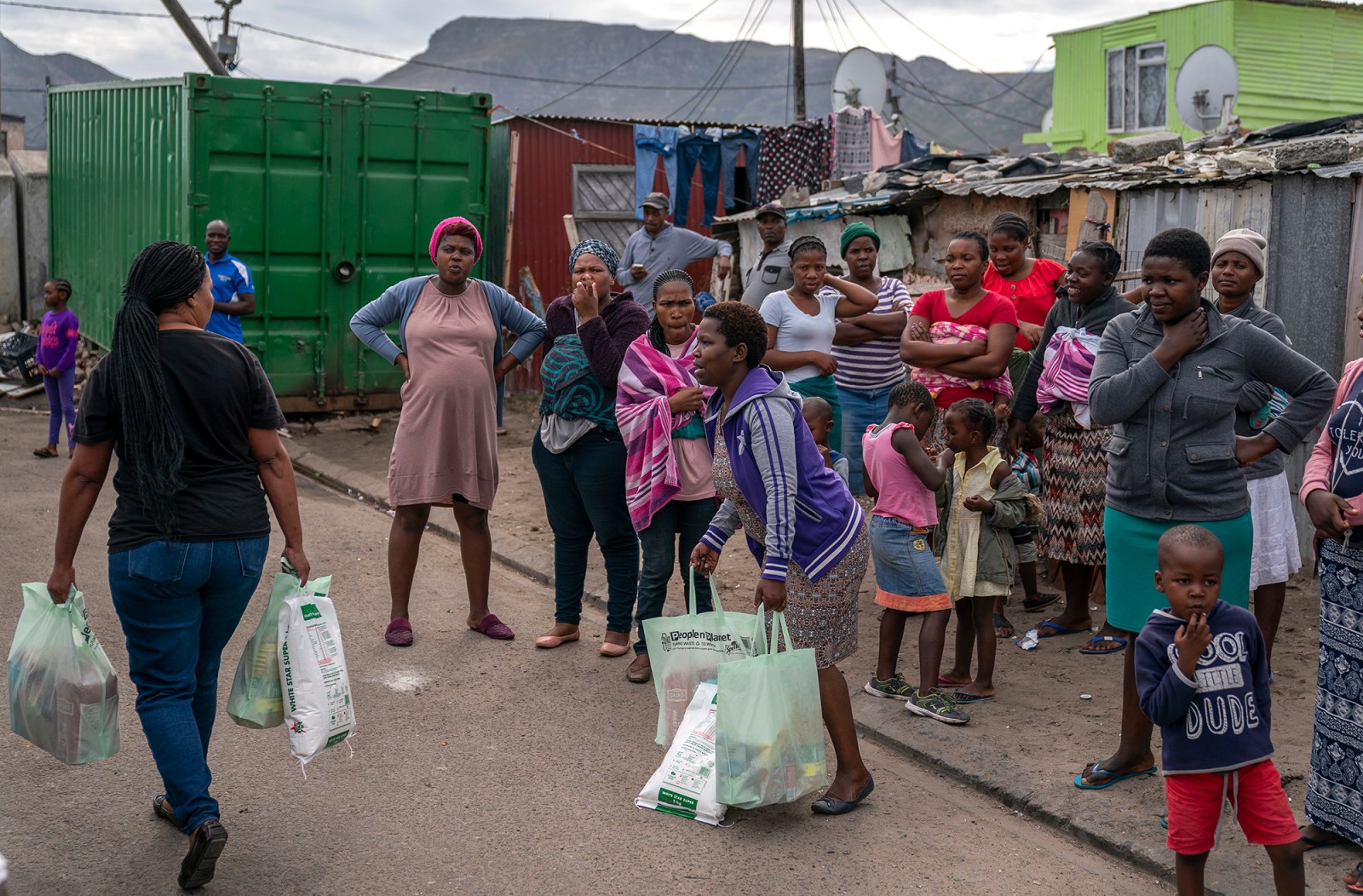 epa08364557 Residents not on a list to receive food parcels look on as South African woman carry food parcels to their shack in the informal settlement of Masiphumelele, Cape Town, South Africa, 15 April 2020. The delivery of food was organized by the One South Africa Movement led by former Democratic Alliance leader (DA) Mmusi Maimane and the Living Hope Christian non-profit organization (NPO). Food collected from outlet Pick n Pay was delivered by volunteers who worked with local street captains that identified the most vulnerable in the community as beneficiaries. The South African government has extended a total lockdown of the country until the end of April to try stem the spread of the coronavirus SARS-CoV-2 which causes the Covid-19 disease. EPA-EFE/NIC BOTHMA ATTENTION: This Image is part of a PHOTO SET

South Africa’s lockdown will be lifted gradually from 30 April, Minister of Cooperative Governance Nkosazana Dlamini-Zuma announced on Thursday 16 April. There will be weekly announcements on the relaxation of rules to slowly bring the country back to “normal”.

This came on the day that the country was originally scheduled to end the lockdown.

As Ed Stoddard reports, a number of relaxations were announced on Thursday. Those stores already permitted to sell essential goods can now sell a range of goods essential for the care of babies and toddlers.

The sale of supplies used to make essential repairs to homes and to supply facilities providing essential services is now allowed.

Call centres involved in providing a number of services, from social support to short-term insurance policies, will be allowed to operate.

Mines will be allowed to run at half their capacity under the lockdown if they comply with strict protocols. However, Mining and Energy Minister Gwede Mantashe said the sector will not be fully up and running by early May. Oil refineries, on the other hand, will run at full capacity.

As the lockdown comes to the end of its third week, food parcels remain scarce in many areas. In Port Elizabeth, residents frustrated at a lack of governmental support through food parcels have looted spaza shops.

Those organisations who have been distributing donated food have had to evacuate their supplies to a safe, secret location for fear of being looted themselves. As they continue to distribute the parcels, they say they can sense intense fear and desperation as people run out of food.

Estelle Ellis writes on what has been promised in the Eastern Cape and what might realistically be delivered.

Meanwhile, clinic committees in Port Elizabeth have not been given permits in order to travel to conduct oversight and help in community education.

In addition, nurses have raised their concerns that a number of patients are refusing to be screened and are lying about attending a funeral in the city. This funeral is seen as a flashpoint for infections. As Estelle Ellis reports, there is a sense that there is a growing stigma attached to Covid-19 in the province.

In the Western Cape, the Flying Squad and the 10111 call centre have been put under quarantine after two members tested positive for Covid-19. As Vincent Cruywagen points out, this means that no vehicles or members of the unit can perform patrols. In the meantime, all calls will be diverted to police stations.

Some South Africans are still stranded far away from home. Peter Fabricius spoke to South African travellers who have been stuck in Cote d’Ivoire for the past month, all the while pleading with the South African government to fly them home. They are becoming fearful as they begin to run out of money and medicines.

Through in-depth data analysis and research, the Digital Forensic Research Lab has managed to expose how a Hong Kong-based digital marketing company used WhatsApp to scam South Africans into handing over their personal information.

The company, Planet49, used the guise of a Covid-19 “relief promotion” voucher with the names of local grocery chains, including Woolworths, Spar and Pick n Pay,  to convince WhatsApp users to share the “promotion” with their contacts but also to give the company permission to sell their personal information to third parties. Jean le Roux explains how the company pulled it off. DM