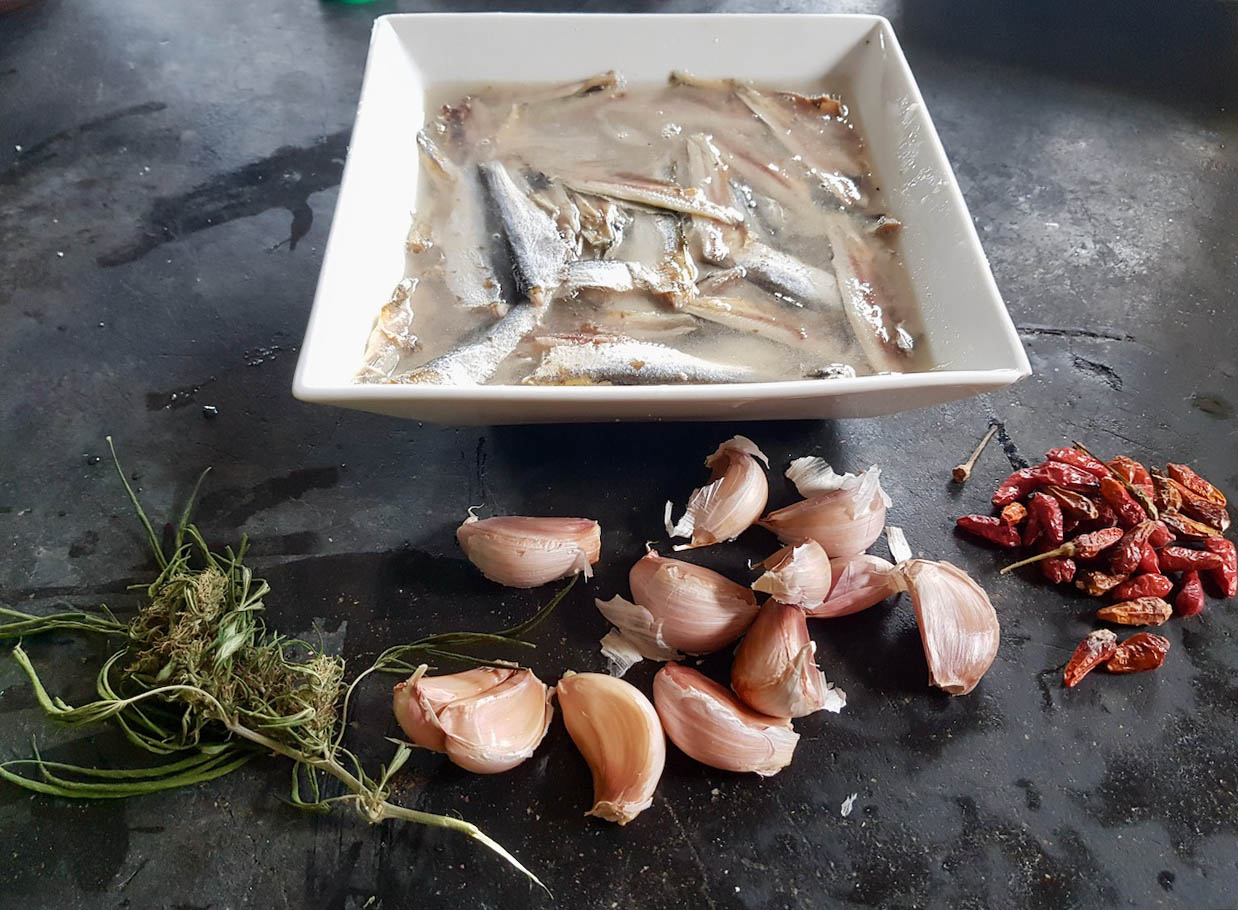 Legendary Durban chef, forager and charcutier Marco Nico knows how to self-sustain. How to pickle and preserve. To ferment. To transform the ordinary into the extraordinary. Be part of the solution, not the problem, is his mantra. He has empathy. Compassion. He’s funny, charming and real. So why is he going batshit during lockdown?

Marco Nico. Forager. Charcutier. Food alchemist. Visionary chef. And a legendary one, given the restaurants he has conceptualised, owned, opened in and around Durban, the palates he has pleasured, starting with his La Buca di Bacco (uMhlanga) in 1989 ﹣ “a revelation” to quote a one-time restaurant reviewer thinking back to the food. Passionate. Innovative. Uncompromising.

A pragmatist, too. All the way from acknowledging the current economic realities to knowing how to self-sustain. Welcoming the opportunity. And being ready and willing to share. Believing in, and acting upon, a “be part of the solution, not the problem” ethos.

“There’s an abundance of food available that people overlook. Food that our grandparents knew about. Food that people have forgotten how to forage and gather.”

Food to pickle and preserve. To ferment.

To transform from the ordinary into the extraordinary.

Take the sardines, one of his projects this past Wednesday.

While stocking up on a few morsels ahead of lockdown, he came upon fresh bait sardines at the Springfield seafood hyper. And bought a nice little stash, knowing he could create his version of boquerones, Spanish tapas anchovies.

By Wednesday they had been under kosher Oryx salt for 14 days, which had essentially pickled them.

At which point he set about deboning them, using his favourite knife, made for him by “my beautiful” older son, “Seb the Lensman” Sebastian, 23, who is holed up in Westville with his fashion designer girlfriend for lockdown.

“I put him in the kitchen at (age) 14,” Nico says. Which served to convince the then-teen that he didn’t want to be a chef or work in a kitchen. “But his focus as a photographer is food. And in his spare time, he makes knives.”

What makes this knife Nico’s favourite, other than that his son made it and gave it to him?

“It’s the hand-feel,” he says. “Well-balanced and with a fantastic cutting edge. The grip is great and for a large knife it’s really versatile.”

Next step was to put the now-filleted sards under vinegar “rice wine, red wine, or what you have” for a couple of hours to a maximum of half a day. The vinegar’s acidic nature “slightly cures them”, he explains.

Next step was to layer them in a container ﹣ chopped garlic, chilli, oregano between the layers ﹣ then cover them with olive oil.

“If one can resist eating them there and then, they will last for up to six months in the fridge. You have your own boquerones. You truly can’t tell the difference.”

He adds that we can treat any of our pelagic (oily) fish like this. “Snoek, mackerel, red-eyed herring, anchovies… simply delicious.”

Nico has gone to ground ﹣ seems the most appropriate turn of phrase ﹣ during lockdown at his La Mercy home. Immediately north of Umdloti (eMdloti). Just up from the uMdloti River. With a view across wetlands and birds (which, within a week of lockdown, he noted, were less skittish and seemed freer) to the lagoon and the ocean.

Where, before lockdown, you’d find him at least some of the time, most days. Swimming. Collecting mussels. Occasionally harvesting an octopus. Nosing among the seaweed for edibles.

His favourite foraging involves the sea. “I can walk there: 400 metres. It’s the one thing I’m missing.”

Nico bought the property six years ago. During his divorce. For the past couple of years, whenever he’s had cash, he’s been building. Pretty organically, he says.

He usually lives here alone. If you can call living with five dogs (plus, as we speak, six puppies) “alone”.

Alone can include the times his 13-year-old son stays over. Which won’t happen during lockdown (he’s in Westville with his mom), given the current sharing restraints.

“I companion-plant,” he says. “Tomatoes and basil, for instance. The bugs for one don’t like the other.”

I tell him of attempts to grow veggies in our little side patch in Glenwood. It’s made me see successful veggie growers as natural wonders, given that every bug in the neighbourhood arrives overnight and devours any spinach, lettuce or rocket leaf on the verge of actualising itself for the plate.

“If the soil is rich enough, it generally stays bug-free,” says the man who can claim to have grown all the herbs for one of his erstwhile partnership restaurant ventures (vintage 2008), the late great 80-seater Marco Polo at Mount Edgecombe, out of a 10 x 2 metre patch.

“Ask all the neighbours for their raw vegetable scraps. Blitz them in a processor. Put that into the soil.” Should help with my bug problem, he says.

During lockdown, as in right now, Nico is not alone.

With him is his 83-year-old aunt, who he invited to come, from Ballito, to hunker down. And his friend, Andre Schubert, of Poison City Brewing and before that, Durban restaurant acclaim. And: “As a cantankerous 58-year-old who doesn’t want to be with people, I’m going batshit,” he says. With a mix of humour and exasperation.

Beyond social distancing, he’s “… keeping to myself as much as possible”.

He’s about to go tie up his tomatoes. Pick some amaranth (wild spinach) to juice with apples and ginger. Fillet the sardines.

And there’s a lot else to fit in before his late morning stint with the outreach arm of a feeding-scheme charity he is collaborating with. Today they will deliver 100 hampers of food to one of two nearby squatter camps; distribution via the pastor based at the camp. With police monitoring and distancing protocol enforced.

Nico’s day typically starts with a morning meditation. Something he started doing back in 2011 when he spent time at Riverview in the KZN Midlands dealing with long-term deep, dark depression issues. There’s no logic in the toxic soup of depression, he says. And it doesn’t help, of course, that it is still regarded by society as a weakness, not as a disease.

In his case, his time at the clinic was transformative. The introspection. “Taking a hard look at oneself. Becoming comfortable in your own skin. Truer to yourself. I came out a different person.” And having learned that for him, his depression is now controllable.

Hence the meditation, among other things.

“My gogo unfortunately had to go home,” he says, getting back to the daily routine. As he likes tidiness and order, there’s a lot of cleaning and sweeping. Working in the vegetable garden. Taking the broom around the house outside and spraying with diluted Jik to keep the flies and whatever else at bay.

That’s just downstairs. Next comes the upstairs, which is currently his escape-to haven.

And in between there is feeding the dogs and the puppies. And making sure they’ve run and exercised on the vacant land outside his gate. And all the playing around with food.

“I’ve not had the time to do even one Netflix,” he says. What with all of this, and meals, and various culinary projects. Like the sauerkraut, also on his Wednesday agenda.

“My dad used to make sauerkraut,” I tell Nico. “Nothing like what I get when I buy it bottled. Might I have your recipe?” I ask. Hopefully.

He tells me to weigh the mound of cabbage I shred; in his case, that he has chopped with that same favourite “Seb” knife.

Figure out three percent of the weight. Measure this amount of Oryx salt and add it to the cabbage. Plus five grams of chopped chilli and five grams of caraway seeds.

Allow all of this to wilt in the fridge for two days. Then bottle, immersing the cabbage under the brine. Burp the bottle daily until all the bubbles have disappeared.

“You now have a properly fermented probiotic sauerkraut.”

First thing that happened, with lockdown announced, was that Nico lost all his consulting work and retainers. His last restaurant was the sublime Thirteen: East Coast Eatery, which opened on Durban’s Florida Road a year or two before the return to life of the street, as written about in TGIF, that for a good while had lost its mojo.

Subsequently much of Nico’s formal work has been in the game lodge industry, which is currently in total, indefinite shutdown. His lockdown losses included a recently acquired contract as group consultant for the four Sabi Sabi lodges, now on hold till March 2021.

He immediately put word out among his contacts. He’d be happy to help in kitchens. With feeding schemes. “I’m in hospitality. I know how to feed 2,000 people,” he says.

“I say there are nine meals between order and anarchy. That’s three days. And a lot of people are suffering.”

No surprise, he was contacted right away.

Friends involved with a Muslim feeding scheme called him in to help.

“The Muslim community, do you know, within a week had raised R1.5-million (up to R2-million now),” he tells me, adding that while he might be an atheist, this in his view is manifestation of the true spirit of living one’s religion.

He has a lot of ideas for “if the economy falls into a ball of shit” given how things are looking.

We all know about the realistic doom-and-gloom predictions for the world’s economy. On the food front alone, many restaurants likely won’t reopen.

He says he’s never truly aspired to the whole capitalist money-oriented ethos. “Although of course if one is in the world and has a spouse and children and commitments, one needs to partake in the monetary system.”

In an envisioned new world order he would like, for starters, to see parks become allotments.

In two ticks, he gives me a 101 “how-to” on the versatile dandelion I had thought was only good for the “he loves-me, he loves-me-not” blow-the-feathery-spindles game.

“May you live in exciting times,” he remarks wryly. “That’s a curse and we’re in them right now.”

The only constant in life is change, he adds. “It’s been long overdue in the world. We’ve needed to make changes. But it could have come in a far nicer way.” DM/TGIFood

Nico shares ideas, charcuterie and other, plus lots of tips, links and idiosyncratic stuff on Facebook. Follow his Marco’s Own page. And see why he likes the Facebook group The Locked Down Cookbook.

View from Up Close: What the Covid-19 crisis reveals about SA