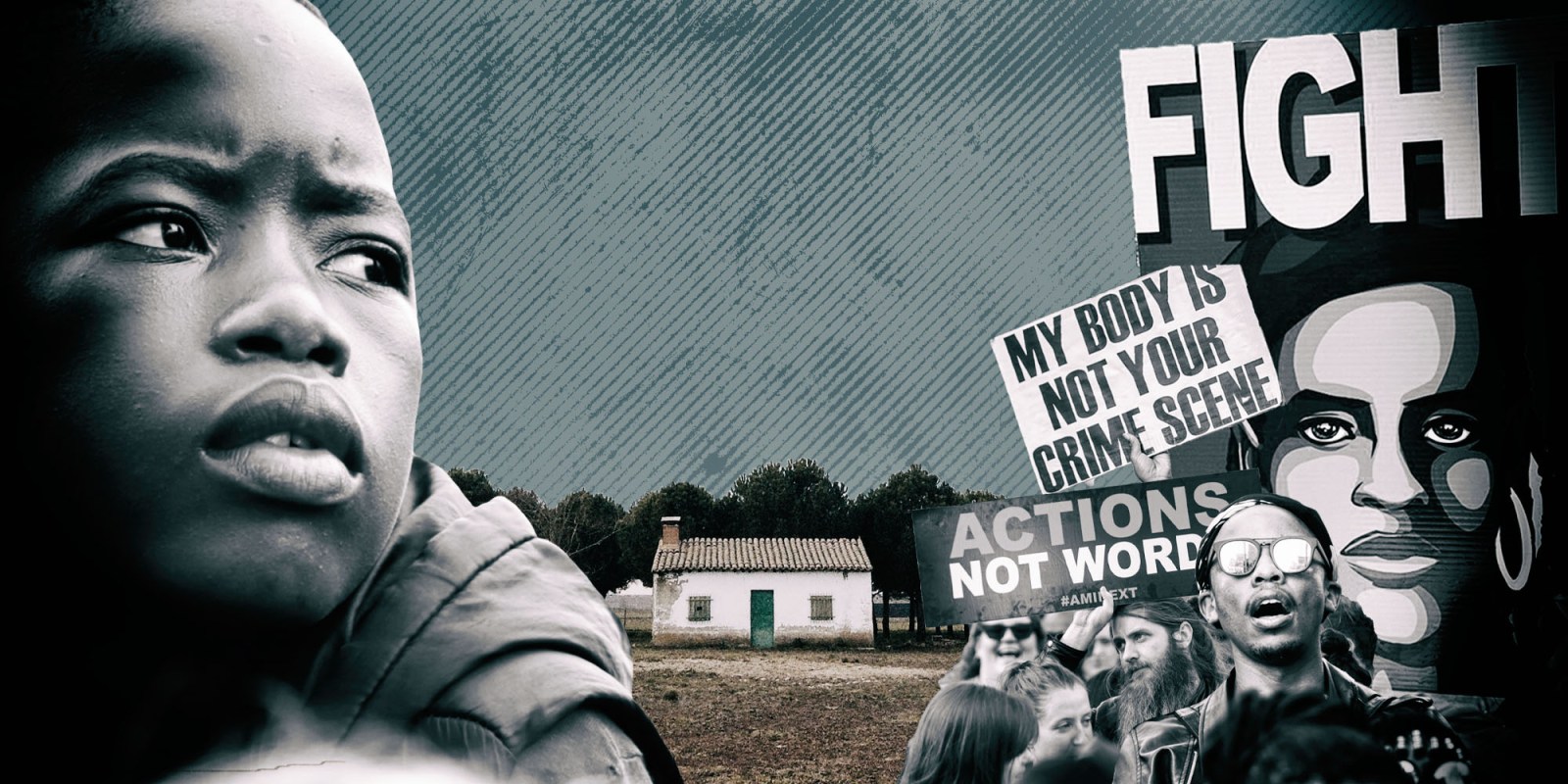 In a survey involving 1,748 participants, researchers Kopano Ratele and Rebecca Helman found that even though more than 80% of participants said they believed in gender equality, there were vast contradictions between their beliefs and their practices.(Photos: Leila Dougan | Gallo Images / Alet Pretorius | Unsplash / Elizabeth Lies)

Against the backdrop of mass demonstrations and news headlines which tell of rape and murder, two researchers are investigating how pushing the boundaries of normalised gender roles in the home could help create a more egalitarian and nonviolent society.

Mahlatse Mashua is a father of three. He picks the kids up from school, cooks dinner, gets the kids into a bath and puts them to bed. But this isn’t the way he was brought up.

“My first hug with my father was in my 20s; we do handshakes,” he says. Mashua grew up in the kind of home where men are the providers and women are the carers, hugs between father and son are reserved for special occasions and boys don’t cry.

“When men come from work, in my upbringing, women tend to them. They need to be offered food, and children need to be tucked away,” he says. “I’ve made a decision to do it differently with my children.”

Cacisa Xegwana is a single parent who lives in Gugulethu, Cape Town. Her son enjoys ballet and playing with dolls. She says friends and family members poke fun when he wears a dress, but she fights back.

“There’s nothing wrong. If he wants to play with dolls, or wants to put on a weave it’s okay, it suits him.”

For Xegwana, it’s simple. If her son asks for a doll, she buys it.

“People at the shop will say, why are you buying a boy this? And I will educate them even at the mall. I’m teaching him nurturing. Teach your children. Equality starts with family; I can’t give something I didn’t learn,” she says.

Kopano Ratele is a psychologist and professor at the University of South Africa (Unisa) and a researcher at the South African Medical Research Council. His work focuses primarily on men, boys and masculinities. Rebecca Helman is a researcher at Unisa’s Violence, Injury and Peace Research Unit. Since 2017, Ratele and Helman have been collecting quantitative and qualitative data on equal and unequal families. Their work was funded by the National Research Foundation and investigates the link between gender inequality and violence.

They conducted a survey, with 1,748 participants, asking questions about their beliefs and practices around gender equality. Some of the questions include whether a woman “should obey her husband”, whether participants have had sex with someone “when they didn’t give their consent” and whether girl children “should do more housework than male or boy children”.

They found that even though more than 80% of participants said they believed in gender equality, there were vast contradictions between their beliefs and their practices.

“While people claim to believe in gender equality, there are contradictions around, for instance, who makes decisions in the house, whether they ask for sexual consent, whether they speak to their children about sexual consent. So people can claim gender equality in public but somehow there’s a disconnect between what happens in public and what happens in private,” says Ratele.

The pair also conducted in-depth research with four egalitarian families who strive for gender equality in the household, spending 10 hours with them, over a course of a few weeks, interviewing and observing them during their daily activities whether it be cooking dinner or taking the dog for a walk.

“We know that in contexts where things are very unequal in terms of gender, then violence is easily possible because if women are not performing their appropriate role it’s seen as acceptable for men to reprimand them with violence. But if you have a context in which men and women are seen as equal and they’re sharing [the workload], then violence is not necessary.”

Ratele says gender inequality is directly connected to gender-based violence, and working with children at home is an essential part of the work that needs to be done to reduce gender-based violence, especially when it comes to teaching boys about equality. Basically, you are missing an essential part of the puzzle if you are trying to empower girls without teaching complementary education to boys.

Mashua and Lusanda Mahlatse have three daughters, all under 10 years old, and they are already teaching them the language of consent. During family visits, the girls don’t have to kiss their relatives or sit on laps.

“I know that they’re small but we want them to have the language of consent, we’re teaching them bodily autonomy. If there are things they’re not comfortable with I have to act on it fast. So if they say ‘no’ and someone doesn’t respond appropriately, they can question that: but why did you continue?” says Lusanda.

Ratele says even though the Mashua family is teaching their girls about consent, if the boys who live next door don’t receive complementary education, equality falls apart. His research is personal, not just academic. He has a 10-year-old son, which means deconstructing patriarchy is woven into their everyday lives, whether they’re watching a movie like Brave, or doing housework like cooking dinner together. He suggests simple day-to-day activities to help promote gender equality, including encouraging boys to do household chores, encouraging them to talk about their feelings and taking them to spaces where gender equality is practised.

As a result, his son is often the only boy who is invited to girls’ parties, and the only boy who spends time with his female classmates during break. Ratele’s concern is that soon there will be pushback from peers.

“If you have a boy like that, who goes out into the schoolground and treats girls with kindness and equality and other boys laugh at you, it’s hurtful. ‘What’s wrong with you? Are you gay or what? Are you moffie?’ Because gay in this moment is used as a slur. If you have a boy like that, sooner or later, if they don’t have the internal strength, they start backing out. So the only solution and the only antidote to that is to do this work, this intense work more rapidly.”

There are endless examples of how families who are practising equality in their households come up against traditional gendered expectations once they leave the home. Nicole Daniels and Peter Russell are a married couple in Fish Hoek, Cape Town, who have two daughters. Even though Peter fetches his daughters from school, letters from teachers are still addressed to Nicole.

Mahlatse once told his male friends how much love he felt for his daughter when she was born and was immediately told that he was “speaking like a woman”. He also knows that there is still a strong son preference in many families. When he tells friends and colleagues that he has three daughters, their response is, “are you going to try for a boy?”

“To them, a father is not complete until they have a boy or a son. Fathers are always caught in this place where their daughters’ birth is not sufficient, that she is not enough, that until a son comes, their own fatherhood is not validated. I don’t entertain it and immediately I counter it,” he says.

Helman says male-identifying people have to recognise how they will benefit from an egalitarian society.

“When you’re paying attention to spaces of freedom, spaces of equality, you see what is possible,” says Ratele.

So where does one start? Ratele suggests six simple things you can try at home with your son to promote gender equality.

One: Clarify and reflect on your own beliefs and practices. If you do not really believe in equality you cannot promote it. If you do not practise equality in your life, at work and at home, you have no basis to promote equality.

Three: Take your son to spaces and homes where gender equality is shown, expressed, lived or practised. Encourage him to watch movies with girl heroes and female leads. Buy, borrow and read books that tell stories of gender equality and justice – they usually come under the idea of fairness – of boys and girls “working” together, as mates, and of girls as leaders.

Four: Teach him to do household chores, shop for items needed in the home, prepare food and, if you eat around the table, ask him to prepare the table.

Six: Talk. Talk has never, ever been cheap. Empty talk is cheap. But when talking means that others will fill the emptiness with wild, incorrect ideas, the consequences can be costly to your son and to others.

“Equality in a relationship, sexual equality, is a good thing because it means the moment you see something happening that is unjust or violence, something in you says, no this is not okay,” says Ratele.

“But it cannot be one person, or one family doing this work. To be able to change society, the larger number of members in society have to move towards the goal. But we have to start somewhere.” DM

This special visual feature was produced in collaboration with, and funded by, UNISA.