Could a classic antimalarial help in the fight against Covid-19? 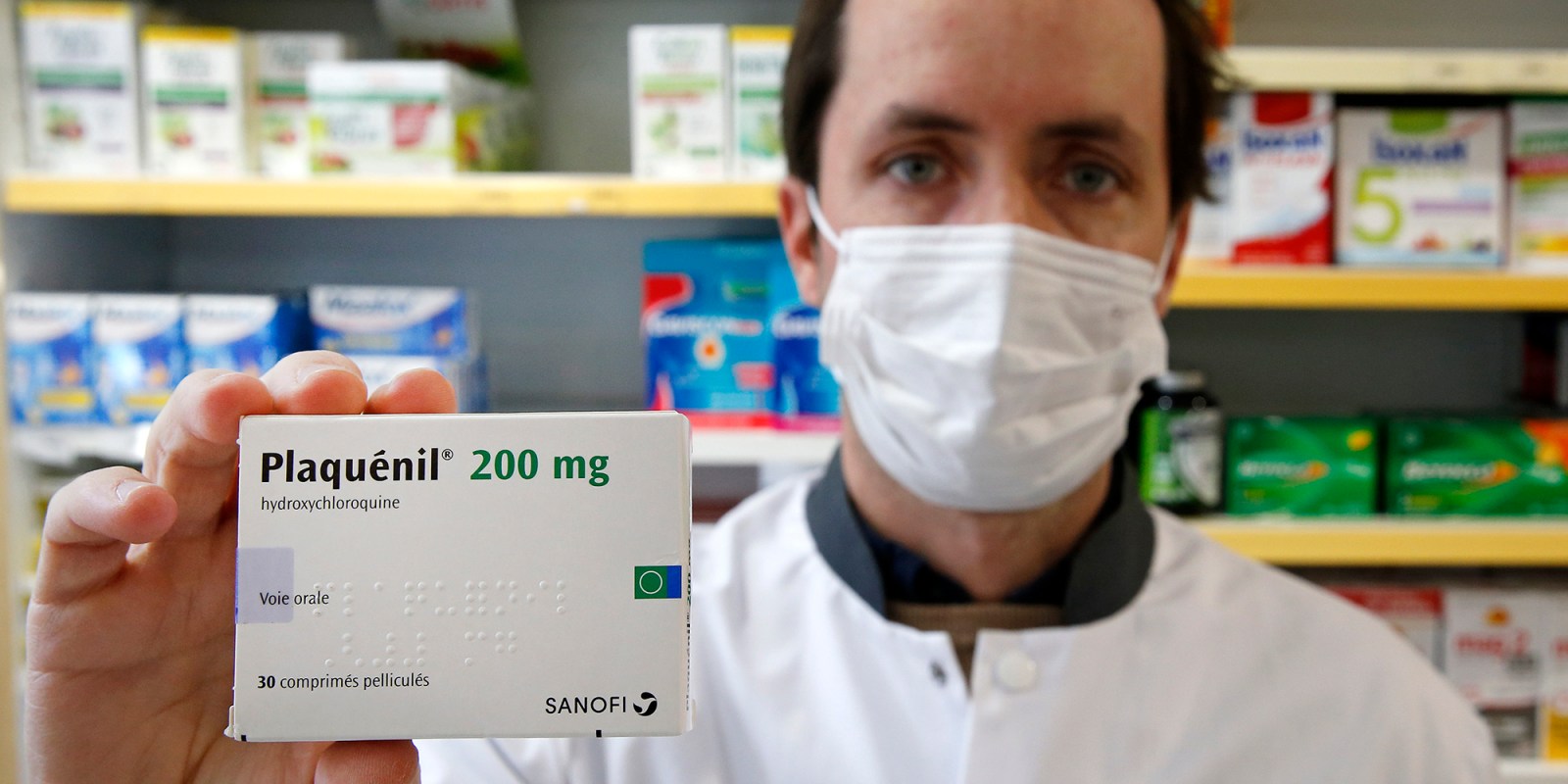 A pharmacy worker shows a box of Plaquenil in Paris. The hydroxychloroquine marketed under the name of Plaquenil is now one of the four treatments being evaluated within the framework of the European clinical trial Discovery against Covid 19. (Photo: Chesnot / Getty Images)

While the promise of repositioning ‘old’ drugs such as chloroquine and hydroxychloroquine is tantalising, it is critical that the hazards of using unapproved treatments are shared with the public to prevent needless fatalities and supply shortages that may further burden already strained healthcare systems.

The world is facing an unprecedented public health crisis. While disease control centres remain uncertain about the course of the Covid-19 pandemic, there is general agreement that physical distancing and strict hygiene measures are vital to “flattening the curve” by limiting the number of infections. In South Africa, 57 million citizens have been told to stay at home during a three-week government-enforced lockdown.

The first of several clinical trials for a vaccine to prevent infection by Sars-CoV-2, the virus that causes Covid-19, began a fortnight ago. But even if that vaccine is found to be efficacious and safe, it will take at least a year before it is available to society’s most vulnerable, such as the elderly and those living with tuberculosis.

While many scientists are racing to develop a Sars-CoV-2-specific antiviral treatment, some are working on a different approach. They are investigating whether it might be possible to “repurpose” drugs that have been around for a long time, rather than starting from scratch. The safety of those drugs has usually already been demonstrated in humans, accelerating their transition from the bench to the bedside.

Earlier this month, the World Health Organisation announced that it was launching a large-scale clinical trial for potential coronavirus therapies to “jumpstart” the search for effective treatments. Independent experts reviewed evidence from a host of laboratory, animal and clinical studies to identify four treatment options for inclusion in the Solidarity mega-trial, of which South Africa is part.

The proposed treatments are antiviral drug remdesivir (active against coronaviruses SARS and MERS and used to treat Ebola), a combination of two anti-HIV drugs called lopinavir and ritonavir, and lopinavir-ritonavir together with a signalling protein called interferon beta. (Disappointingly, a preliminary trial of the lopinavir-ritonavir combination in adults with severe Covid-19 has shown no benefit.)

The fourth treatment arm will comprise chloroquine or hydroxychloroquine, two closely related drugs typically used to treat malaria and rheumatic conditions, respectively. Public interest in these medicines has surged as a result of recent claims by entrepreneur Elon Musk and US President Donald Trump.

What we know about chloroquine

Chloroquine is a classic antimalarial drug that revolutionised the treatment of malaria in the 20th century. It is a synthetic derivative of quinine, one of the oldest natural treatments for malaria. Since it was first administered as an antimalarial in 1944, chloroquine has saved millions of lives across the globe.

It was a remarkably effective, safe and inexpensive treatment against malaria until the emergence and spread of resistance led to a sharp decline in its use. Hydroxychloroquine, a derivative of chloroquine, is also effective against malaria and is usually preferred because of its more tolerable safety profile.

It is well established that chloroquine and hydroxychloroquine inhibit an important metabolic pathway in the malaria parasite called haemozoin biocrystallisation, but the precise way in which this leads to parasite death remains unclear. These drugs are also likely to disturb other aspects of metabolism within the malaria parasite. Part of my doctoral research investigated how chloroquine distributes within the parasite and interacts with protein targets.

Despite their longstanding use as antimalarials, chloroquine and hydroxychloroquine are also used in the clinical treatment of other diseases such as rheumatoid arthritis and lupus, an autoimmune disease. Chloroquine has even been proposed as an adjunct in some cancer therapy regimes. However, serious side effects can result from acute and chronic use of these drugs and so appropriate doses need to be selected carefully.

In addition to these broad-spectrum effects on the immune system, chloroquine also exhibits potent antiviral activity in a petri dish (“in vitro”) against Sars-CoV, the strain of coronavirus that was identified in 2003 to cause severe acute respiratory syndrome (SARS).

How chloroquine diminishes viral replication is unclear; it appears to modulate vesicular pH and may also interfere with virus-receptor binding. A recent hypothesis suggests that chloroquine may act as a zinc “ionophore” (meaning that it has a high affinity for zinc ions), leading to a high cellular concentration of this metal which could effectively impair replication of the virus.

Interestingly, these inhibitory effects are observed when cells are treated with chloroquine either before or after exposure to the virus, suggesting that chloroquine may have both prophylactic and therapeutic potential.

Last month, preliminary clinical investigations in China found that chloroquine may be effective and safe in treating Covid-19 associated pneumonia. The report stated that:

“Results from more than 100 patients have demonstrated that chloroquine phosphate is superior to the control treatment in inhibiting the exacerbation of pneumonia, improving lung imaging findings, promoting a virus negative conversion, and shortening the disease course. […] Severe adverse reactions to chloroquine phosphate were not noted in these patients.”

To investigate further the potential of chloroquine as a treatment for Covid-19, there are currently over a dozen ongoing clinical trials in China. However, experts have voiced concern that the randomised controlled trials in China are small and may not be powered enough to reach the statistical conclusions that are needed.

For hydroxychloroquine, a non-randomised trial published earlier this month by researchers in France concluded that the drug significantly reduced viral load in nasal swabs of Covid-19 patients when it was administered in combination with antibacterial drug azithromycin. Despite being a small, open-label trial, this preliminary result is encouraging.

Further clinical trials are scheduled to start soon in the UK, Canada, Egypt, Thailand and Norway, among other countries. Importantly, the doses and side effects of these interventions will need to be closely monitored to avoid acute toxicity. To assist these global efforts, pharmaceutical giants Bayer and Novartis have announced that they will donate vast quantities of chloroquine and hydroxychloroquine, respectively.

Finding ways to manage and mitigate Covid-19 infections is an urgent need, especially for countries such as South Africa in which a large proportion of the population is vulnerable to infection. While the promise of repositioning “old” drugs such as chloroquine and hydroxychloroquine is tantalising, it is critical that the hazards of using unapproved treatments are shared with the public to prevent needless fatalities and supply shortages that may further burden already strained healthcare systems.

It is important that robust data, gathered from properly managed clinical trials, are obtained quickly in order to make informed clinical decisions for patients with C0vid-19. Fortunately, while we wait, there are a growing number of online resources for research scientists to make their contribution to “crowdfighting” this alarming pandemic. DM

John Woodland is a postdoctoral medicinal chemist with the Drug Discovery and Development Centre (H3D) at the University of Cape Town.