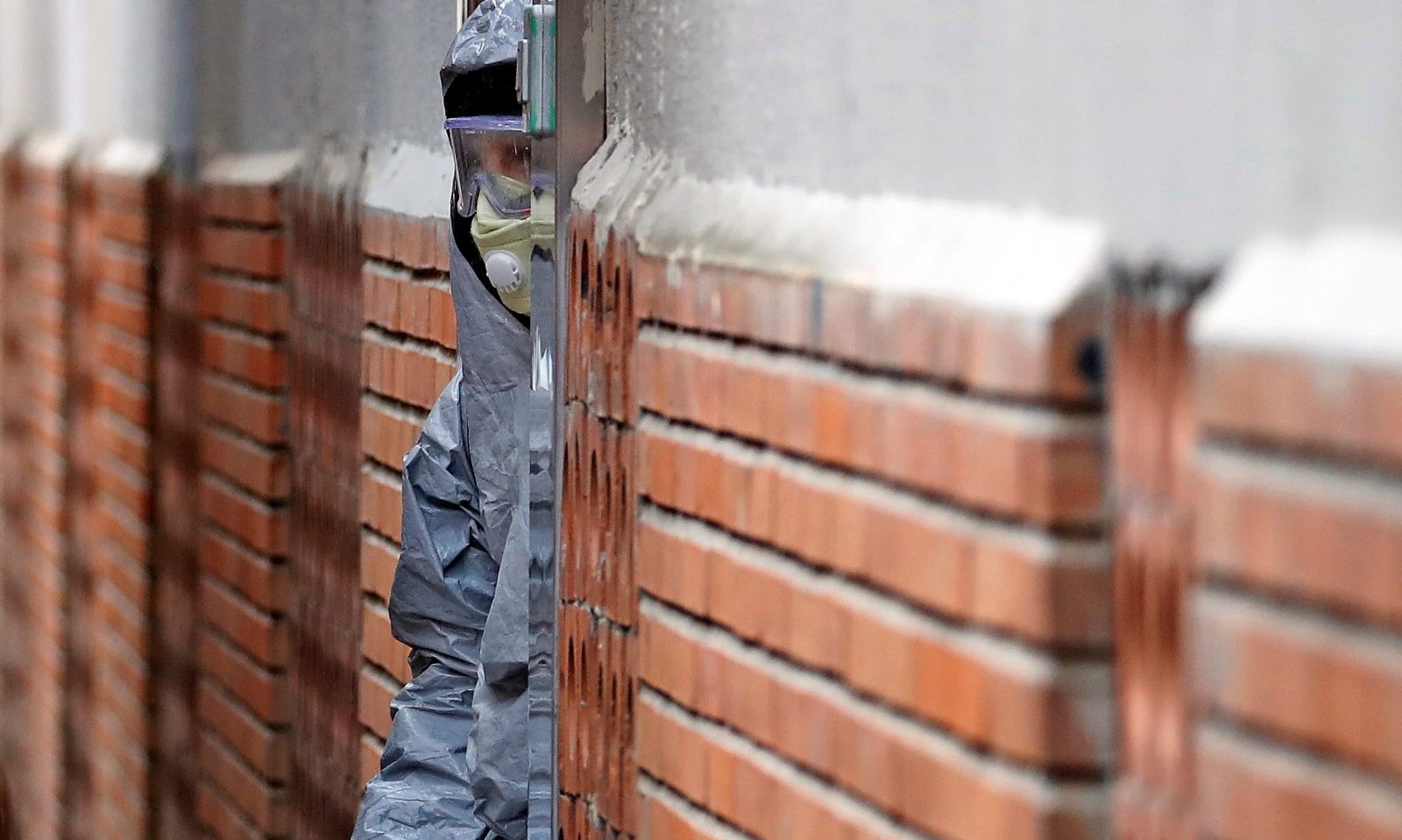 A firefighter takes part in the disinfection of religious residence of the Sant Josep College, in Barcelona, Catalonia, Spain, 30 March 2020. Spain is on its 16th day of lockdown as Spanish government has announced a temporary stop to all construction works and other non-essential economic activities as the Mediterranean country suffers one of the worst outbreaks of the pandemic COVID-19 disease caused by the SARS-CoV-2 coronavirus. EPA-EFE/ALBERTO ESTEVEZ

While South Africa is coming to grips with living in lockdown for another 17 days, the country has a small chance of coming out ahead, and flattening the curve much sooner than the US and some European countries. This is a look at the top five countries dealing with the largest numbers of Covid-19 cases.

On Sunday, 29 March, United States President Donald Trump announced that the US would not be open for business by Easter. Global cases hit 700,000 on Sunday, and the US is also confirmed as having the highest recorded number of infections with 141,100 confirmed cases and 2,470 deaths. Trump said current federal physical distancing guidelines would stay in place until 30 April 2020.

New York City mayor Bill de Blasio announced a state of emergency on 12 March 2020. Public gatherings of more than 500 were banned and schools and universities started to close. Broadway went dark for the second time in its existence, and the MET museums and the MOMO closed their doors. New Yorkers who break physical distancing and gathering numbers rules face fines of up to $500.

About two weeks after New York announced its state of emergency and strict physical distancing, and gathering restrictions, several states followed suit and the entire country is now following strict physical distancing rules. Most public schools have started electronic classes while most universities were on spring break for the last two weeks and will remain closed.

In the past two weeks, unemployment has soared in the US. From starting March with a record 50-year low of 3.5% to closing March with 20% due to Covid-19 shutting down many food, entertainment, hotel and food-related businesses. Nationwide, unemployment claims went from 281,000 in the first week of March to 3.3-million by 26 March .

In an attempt to save the US economy, Congress reached an agreement last week on a much maligned $2-trillion stimulus package. The package will mean direct payments to American citizens who earn under a certain amount with up-to-date 2018/2019 taxes.

Many economists say the bailout will not save the US economy from a severe recession. However, the key criticism is that too much of the bailout is going to support big businesses, rather than the most economically challenged citizens of the country. See details here.

Italy started a national quarantine on 9 March, which was then set to be lifted on 3 April 2020, this coming Friday. All signs are that the quarantine will be extended as the country battles to contain the virus and get the number of new infections down. On Sunday, health officials said Italy should prepare for a long lockdown. “We all want to go back to normal, but we have to do it one switch at a time,” regional affairs minister Francesco Boccia told an Italian TV channel.

Addressing the nation on 28 March 2020, Prime Minster Giuseppe Conte said he wants to keep the lockdown going in full or in part until June 2020. During his address, Conte also announced a food voucher programme after police had to start guarding supermarkets in Sicily, due to looting by people who did not have money for food.

China closed its borders to international travelers on 28 March 2020, after confirming that 30 of 31 new Covid-19 cases had been brought into the country. From 18 March to date, 500 new cases were foreigners coming into the country and there were very few new cases originating inside the country. While much of China is reportedly back to normal, shops and bars are open, businesses are running again, there are currently 81,470 Covid-19 cases in mainland China, with 3,304 deaths and just over 75,000 recoveries.

Economists say China may have lost as many as 5-million jobs in the months of January and February 2020 due to the pandemic. The virus caused a sharp economic slowdown in China with business struggling to revive or maintain operations, leading to layoffs and pay cuts.

Wuhan, the epicentre of the outbreak, is still under lockdown, but that is set to be lifted on 8 April 2020. The world is watching the situation in China keenly as it’s the first place where a lockdown has been lifted and life “as normal” is starting again. According to some reports, the Chinese are so used to face masks and physical distancing now, that they do it automatically.

Much of the world is holding its breath to see what happens next. China is carefully monitoring for flare ups. Places that hold large crowds like cinemas and gyms are still closed. There are temperature checks at subway entrances and at schools. As the world waits to get to the stage that China is at, all eyes are anxiously focussed on that country to see what the next step is – are we eliminating a virus, or waiting for a vaccine?

On 28 March, Spanish Prime Minister Pedro Sánchez announced that his country was going into a total lockdown. No one may leave their homes unless they are involved in essential services. The lockdown starts Monday, 30 March and runs until Thursday, 9 April. The lockdown runs concurrent with the State of Alarm, which runs until 12 April 2020 and allows limited movement.

Spanish daily newspaper El País reports that workers are meant to continue to receive their salaries from their employees and once they go back to work, they will work an extra hour a day until the lost hours have been recovered. Addressing the media on Saturday, Sanchez said: “These are very tough, sad, bitter days.”

Currently, many countries are looking at Germany and asking what they are doing right with confirmed cases at 62,435 and one of the lowest death rates at 541. Germany has nationwide movement restrictions in place for citizens until 20 April. Most food and entertainment outlets, schools and universities have been shut down as well as non-essential shops. On 27 March 2020, German Chancellor Angela Merkel asked that people be patient with the Covid-19 restrictions. Major retailers Adidas and H&M are planning to stop paying rent – in fact Adidas seems to have already stopped paying.

The German government says businesses who have had to close their doors still have to pay rent. Under new legislation pushed through last week, landlords are now barred from terminating rental agreements where tenants have missed three payments. This was, however, not aimed at big businesses like Adidas and H&M. The Berlin Tenants’ Association is calling for a solidarity fund to help companies facing financial hardship. Germany’s emergency aid package rules out termination of tenancy between 1 April and 30 June 2020 to ensure that people do not lose their homes.

Germany could also lose 90,000 jobs due to the pandemic. A report released on Friday, 27 March by the IAB labour market research institute, said that Germany was looking at 90,000 to possibly 1-million jobs lost in 2020 due to Covid-19.

There is also trouble brewing among EU members with some member states wanting a debt solution to come from the joint region to support individual countries. Other countries are saying each country should shoulder their own burden.

The EU held a virtual summit on 26 March to try to finalise “corona bonds” as a relief measure following nine EU countries calling for mutualised debt as the continent is hammered by the economic fallout of the virus. Germany and the Netherlands led opposition to the issuing of joint bonds, tempers flared and European Council President Charles Michel managed to get leaders to agree to return to the debate in two weeks.

Take the win, Africa, as you are the biggest loser currently. Africa has recorded too few cases or deaths to feature on the top 10, 20 or 50 countries with the highest number of Covid-19 cases or deaths. Long may it remain. DM