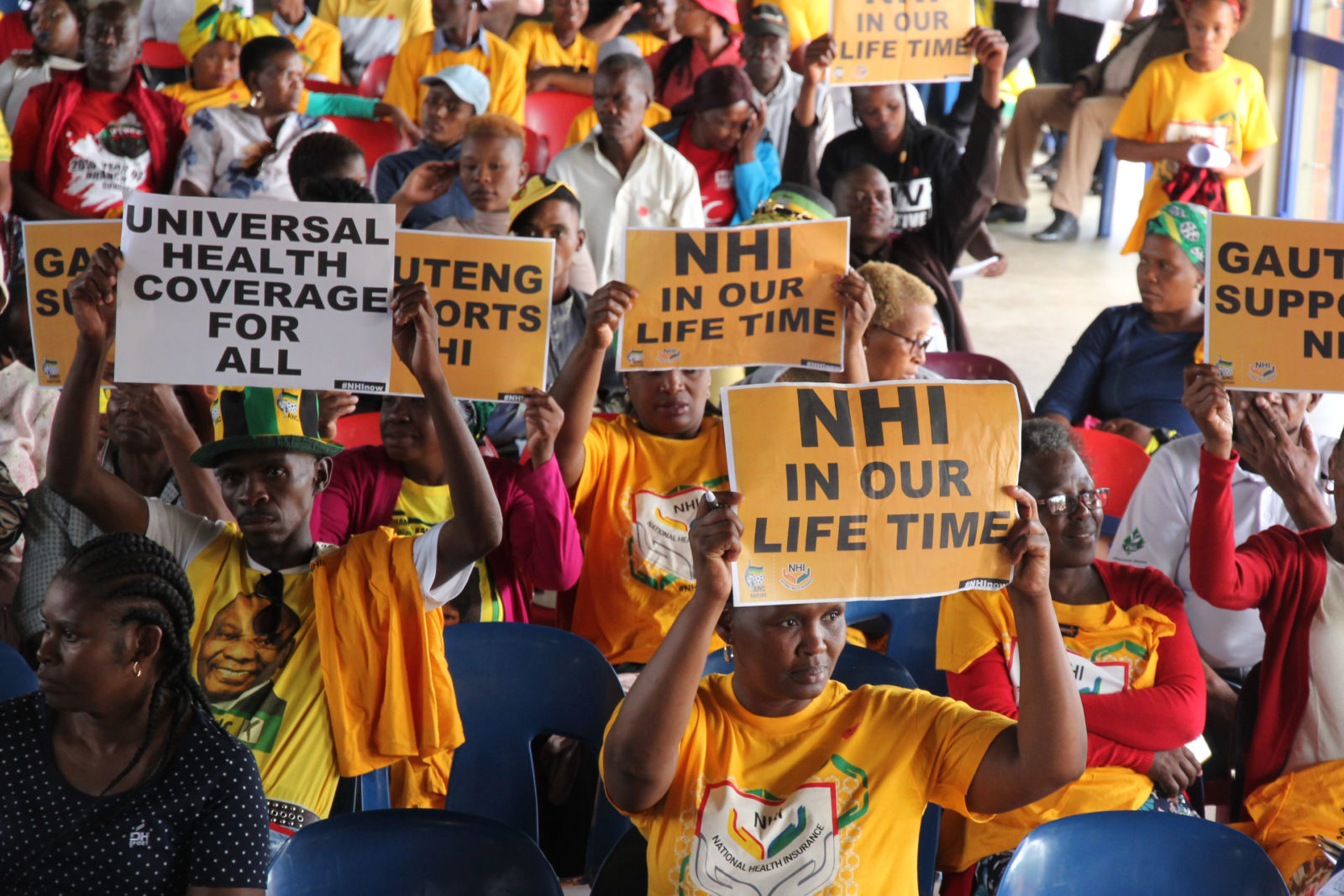 Residents in Kagiso and Soweto express their views on the NHI Bill. (Photo: Rosetta Msimango / Spotlight)

Wittingly or unwittingly, the proposal for National Health Insurance has created two camps: pro-NHI and anti-NHI. But there is much more to improving health and healthcare in South Africa than the NHI.

In 1939, Dr Salvador Allende, then minister of health in Chile, contended that without improved housing, nutrition and employment for the majority, increased healthcare services would do little to reduce mortality and morbidity rates in Chile.

This view has much to offer in thinking about health in South Africa today, which, according to the Indigo Wellness Index figures, is the most unhealthy nation in the world.

Drawing the links between socioeconomics and health, Hoosen Coovadia and co-authors, trace four epidemics and one social problem as key to premature death, and high rates of illness and injury in South Africa. Three of the epidemics are “diseases of poverty”: infectious diseases, maternal death and malnutrition. The fourth is non-communicable diseases (NCDs) like diabetes and hypertension. Violence rooted in toxic masculinity is identified as the social problem contributing to high mortality and morbidity.

While many health analysts and researchers cite the high or quadruple burden of disease in South Africa, few reflect on the historical roots elaborated by Coovadia and co-authors. Even less discuss the socio-economic reforms recommended in the seminal article which was published a decade ago, but has had little impact on the formulation of health policy.

Coovadia et al argue that the “major determinant of disease patterns” in Southern Africa is a structure, or set of relations, that developed over time but is rooted in the migrant labour system, and a history of war and conflict.

War and conflict, largely arising in the colonial and apartheid periods, made for a martial notion of masculinity defined by male superiority, physical strength and respect for hierarchy. Still shaping the socialisation of boys, this form of masculinity has normalised violence in interpersonal relations. Women resisting desires and decisions of men are subject to sexual, and other forms of violence. Similarly, children are subject to violence within the hierarchy of the family as well as neglect fueled by the absence of mothers and fathers migrating for work.

Building on this analysis in my article, I add rural and urban land reform-oriented toward carbon-neutral, labour-intensive food production and processing. This would improve working and living conditions, help solve unemployment, increase real wages, tackle malnutrition and contribute to NCD prevention.

To further address violence, I add emancipatory programmes for and by females, and gender non-conforming individuals to help build self-esteem, deal with the effects of violence and other trauma and increase health literacy.

More broadly, health literacy programmes are crucial for all genders. Without them, improvements in medical care will not be effective, particularly given the context of weak basic education for the majority of the population.

Another aspect vital to improving health in South Africa is adequate valuing and training of female health workers, which I argue elsewhere form the backbone of the health system.

The National Development Plan 2030 envisions some 700,000 more community health workers (CHWs) to implement community-based healthcare. The latest government data available shows that between 1997 and 2011, the total number of healthcare workers in the public sector grew by 60,000 — from 228,248 workers to 284,211 workers — three quarters of which were CHWs. Meanwhile, according to some reports, CHWs are still not paid the national minimum wage stipulated in Budget 2019 and continue to receive only a stipend.

Not only adequate remuneration, but standardised training is urgent for CHWs, along with ongoing training for both CHWs and nurses. I argue such training should be defined through a public, nationwide place-based research effort identifying specific types of healthcare and health education (ie. physical, mental, and likely others), needed in various contexts.

Budget 2020’s under 1% spending increase in health and planned cuts to public servants over the next three years do not bode well for any of the above.

Regarding the NHI, I highlight the purchaser-provider split, a part of the grand plan that is rarely raised by critics, but is arguably its greatest defect.

Studies of numerous countries in Europe since the 1990s show that the purchaser-provider split, or a public healthcare system that buys services from private healthcare providers is costly and inefficient.

In Finland, this model was implemented in municipalities from the 1990s and gave way to the formation of a market for private healthcare provision, and monopolies gained by large firms. In other words, a health system much like the one South Africa already has. Meanwhile, the quality and reach of care in Finland have diminished, contrary to the purported benefits of private healthcare.

Similarly in South Africa, the Health Market Inquiry (HMI) Provisional Report found that though it is “generally believed that the private healthcare sector provides better quality care when compared to the public sector… this is difficult to assess objectively as the SA private market does not have standardised means of measuring and comparing quality of healthcare services or outcomes”. Nevertheless, the costs of private healthcare and private health insurance increase continually, with “stagnant growth in covered lives and a progressively decreasing range and depth of services covered by medical scheme options”.

Despite all this evidence, the NHI has adopted the purchaser-provider split. Ultimately, this means that the high and ever-rising prices spawned by the monopoly structure of South Africa’s healthcare industry revealed in the HMI will become the burden of the public healthcare wallet.

Appalling as supply chain management in public healthcare looks today — replete with widespread patronage and corruption facilitated by the tender system — the NHI will be a yet larger leaking ship.

An alternative to the NHI is fully public, non-profit universal healthcare in which care is both funded and provided by the public system. Differing from the loud noise made by proponents of private healthcare, a 2018 study estimated that 62% of South Africans believe in progressive health financing where all South Africans pay something and lowest income earners pay the least or nothing. This, along with the HMI finding of overpriced private healthcare of questionable quality — suggest that reaching a consensus around fully public, non-profit universal healthcare is neither impossible nor irrational and hence a task for all those concerned about ill health, inequality and effective public spending in South Africa. MC

Salimah Valiani is the author of Rethinking Unequal Exchange – The Global Integration of Nursing Labour Markets (University of Toronto Press, 2012), and several articles and research papers on nurses and the political economy of healthcare. She is also the past economist of the Ontario Nurses’ Association, the largest nurses union in Canada.

Biénne Huisman for Spotlight • 23 hours ago