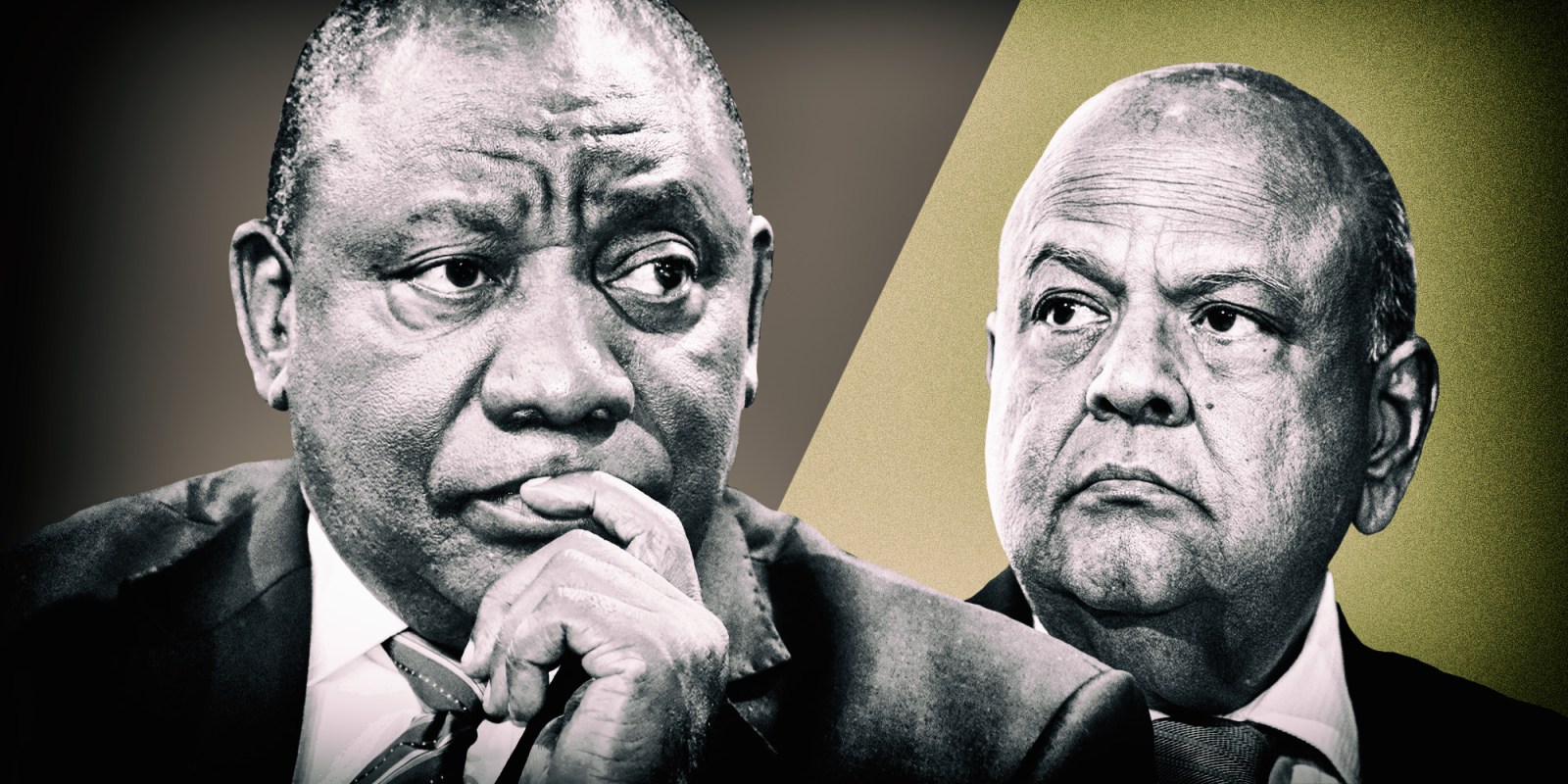 South Africa's current political leadership is widely seen as taking the challenge of the country's debt seriously, though hamstrung in its actions by opposition inside the ANC. In key posts, Cabinet ministers like Gwede Mantashe, Tito Mboweni and Pravin Gordhan are all taking positions at odds with ANC economic policy of the last 10 years.

Spoiler alert: underlying and structural political changes inside and outside of government are pushing the South African state towards better governance. The perilous state of the fiscus is frightening but accelerating that change in direction.

In 2020, South Africa’s governmental debt increases by slightly more than R1-billion a day. Shocking as that figure is, these leaps into indebtedness did not arrive with the administration of President Cyril Ramaphosa. The state is on track to have averaged just short of R1-billion a day between 2015 and 2021.

The result is that while government’s debt to GDP ratio stood at 27% in 2008, twelve years later, ongoing fiscal deficits have raised this figure to an eye-watering 65% and rising. A recent Daily Maverick article by Ntobeko Stampu suggests that South Africa’s risk of default is priced as comparable to that of Paraguay, Guatemala and Jordan. South Africa would prefer to be seen as a peer to Thailand and Malaysia in economic credibility, but this is vividly revealed to be untrue.

The first is that increasing debt levels lead to higher interest rates for government debt. As the debt burden grows, the government needs to offer more compensation to the market to cover the increased risk of default. This causes interest rates to rise across the economy, which means people have less disposable income as they spend more on servicing their debt. In addition, investment reduces as higher returns are needed to be able to repay borrowings.

A second growth-inhibiting channel of high government debt levels is that high state indebtedness is seen as a proxy for poor governance. A fear develops that the government is unable or unwilling to act responsibly, which may expose investors to other governance risks.

A third channel by which heightened debt levels lead to lower economic growth is looming taxation. Barring inflating the currency with ruinous effect to the poor, debt has to be paid off through taxation. High debt levels generate the expectation of future tax increases, thus frightening off investors who expect increased costs to their operations.

It appears that we are already seeing this slow-down effect. In 2019, South Africa’s economy grew at only 0.2%, the slowest since the Great Recession year of 2009. Since 2009, annual GDP growth has been anaemic, averaging 1.4%. Taken together with population growth, GDP per capita declined from a high of $8,007 in 2011 to $6,100 in 2019, leaving South Africans significantly poorer.

How did South Africa get into such a precarious position? The proximate economic explanation is that the government spent more than it earned from 2009 onwards.

Initially, this was a stimulatory response to the financial crisis of that year. It was expected that the borrowing would be repaid when South Africa resumed its pre-financial crisis GDP growth rate of about 4% a year. Carrying a deficit became a structural part of the budget as significant increases in the compensation and size of the civil service were normalised. The only part of the budget that grew faster than the government wage bill was its debt bill. Since 2009, annual debt service costs have grown 5% faster than the economy, and the wage bill 2% faster.

The government has without fail overestimated future growth since 2009. Looking backwards from now, making wrong estimates eight times in a row looks less like bad luck and more like incompetence, which is not reassuring for investors.

Faster growth would have made a visible difference to South Africa’s current position.

If GDP had grown slightly more than it did, South Africa would not be facing a debt crisis. An analysis by the Centre for Development and Enterprise (CDE) shows that if GDP had annually grown by 1% more than it did since 2008, and each percentage point increase had delivered an increase of 0.25% more taxes, then the debt ratio would now be 44% and falling.

Now that South Africa is in a debt crisis, how can it escape its precarious position?

As modelling by CDE shows, economic growth is a large part of how South Africa can improve its negative financial position. The bad news is that this is hard to achieve.

The reasons for slower growth rates since 2009 are multiple, but generally explained by a combination of decreased confidence in governance and the quality of governance under the Zuma administration (glaringly exposed by electricity outages and corruption scandals), higher taxation, harmful political rhetoric, scarcity of skills, maturity of South Africa’s industries and a volatile international economic environment. The aspects that can be impacted by the South African government are slow to change, thus no rapid growth should be expected any time soon.

The consequence is that in the short to medium term, the government needs to accept that economic growth will not be stellar. Thus, government expenditures have to be cut to stabilise dangerous debt levels that further inhibit growth.

Beyond clarity of what needs to be done, there are several structural political changes that bode well for a return to fiscal health.

To begin with, forces are crystallising inside the circle of power towards better governance.

The leadership of the current administration is widely seen as taking the challenge of South Africa’s debt seriously, though hamstrung in its actions by opposition inside the ANC. In key posts, Cabinet ministers are changing the direction of travel. Gwede Mantashe, Tito Mboweni and Pravin Gordhan (respectively, Ministers of Minerals and Energy, Finance, and Public Enterprises) are all taking positions at odds with ANC economic policy of the last 10 years.

Meanwhile, the government’s allies in the trade unions also appear to be recognising the gravity of the debt situation and the need for new approaches. Recently, Cosatu proposed using workers’ pension funds to refinance some of the enormous and ballooning debt of Eskom, the state-owned monopoly electricity firm. Whether it is the right intervention or not, it shows that organised labour is not blind to the bad shape of the economy and the government’s balance sheet. It remains to be seen whether such an insight will have a consistent effect on the unions’ engagement with government.

Outside of government, at least two long-term political changes are simultaneously putting the governing party under pressure to deliver improved governance.

Firstly, the ANC has often explained poor governance outcomes in poverty, unemployment and inequality by referring to the after-effects of the former apartheid regime or a conspiracy of entrenched economic elites against it. Both the long duration of ANC rule and a new left-wing party, the EFF, are making this narrative less convincing to voters.

The ANC has governed for almost a full generation, and the electorate is finding it increasingly hard to believe that the ANC is not at least partly responsible for poor governance outcomes.

Meanwhile, the EFF promises to break the implied sabotaging power of entrenched economic elites in a much more radical way. Their vision has little to do with good governance and more with the destructive revolution practiced by the Chavistas in Venezuela, which beguiled and then ruined the poor. Here the logic is: why vote for the ANC as an EFF-lite, if you can have the real thing by voting for the EFF​?

The only way out for the ANC is to shift towards good governance or risk irrelevance. These change drivers can be seen in electoral results, which show a decline in voting (especially by the young, who did not experience apartheid first-hand) and a defection of ANC voters to the EFF. It is now or never for the ANC. If it does not shift towards delivering good governance, it will become politically extinct.

Secondly, a further political evolution is driving the country towards improved governance.

It is well known that the electoral structure of the country lends itself to rule through coalitions of parties, once the current majority-party system is no longer in place. Declining ANC support is making this more and more visible at a national scale. Coalitions have been in place in the Western Cape and the city governments of Cape Town, Port Elizabeth, Pretoria and Johannesburg.

Coalition arrangements are still fragile but are beginning to bear fruit for the voter. Scrutiny into the inner workings of these governments is becoming possible for voters as competing, but collaborating parties reveal the interests at play in government. As voters and parties become used to this sea change, more accountability will be demanded of politicians, and as a consequence, the pressure for improved governance increases.

The parties most competent and committed to good governance will become obvious to voters and grow in support.

While the current travails of the government and its debt burden are deeply disturbing to the eye, the pressure is revealing an alignment of political forces that supports recovery of both fiscal responsibility and economic growth. DM

Christiaan Endres is a Project Manager at the Konrad-Adenauer-Stiftung office in Cape Town.