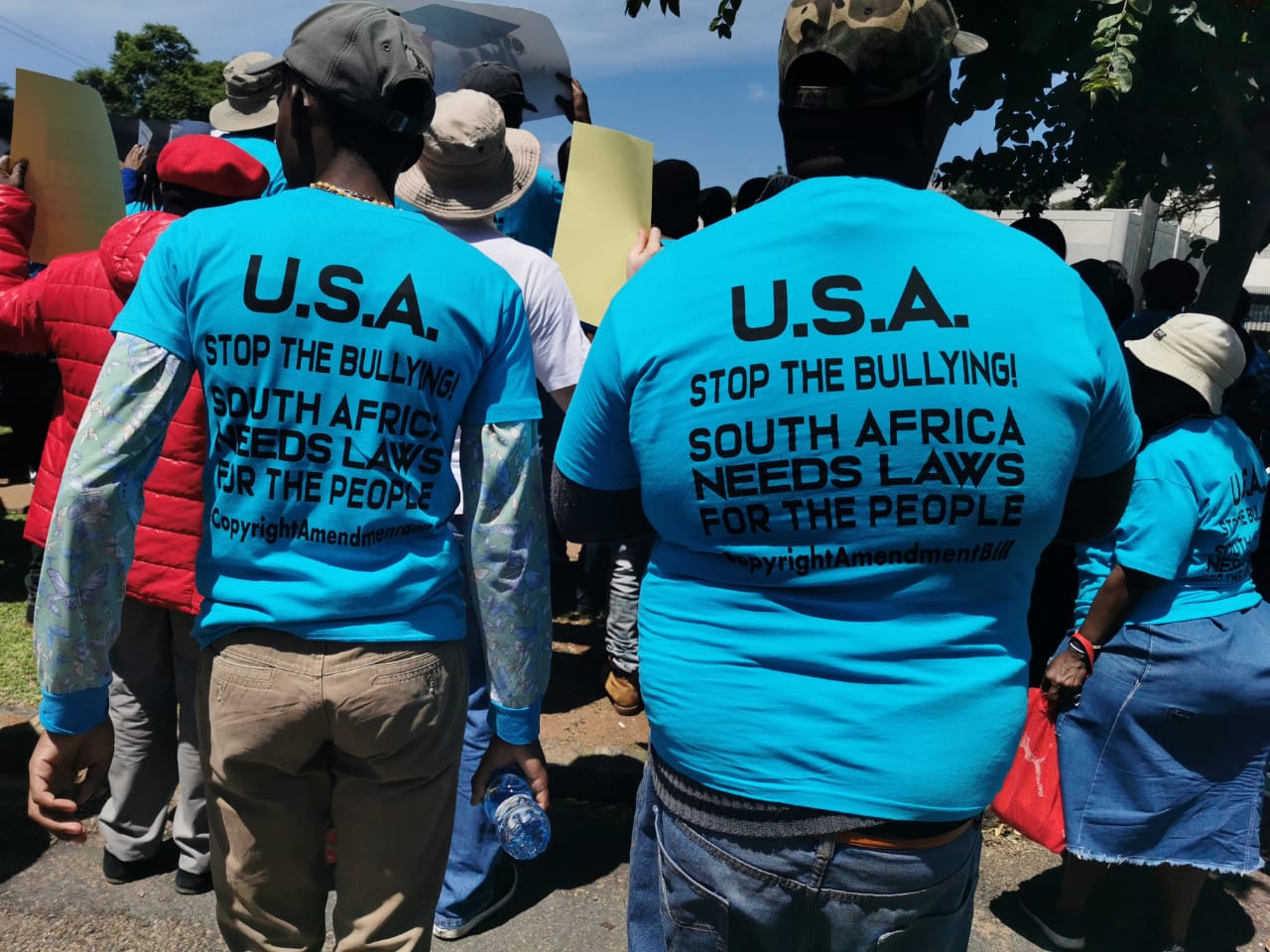 Members of the Treatment Action Campaign joined the protest. Photo by Jack Devnarain

Activists, unionists, and artists staged a picket outside the US embassy in Pretoria yesterday, in protest at the ‘frivolous’ petition by big US entertainment companies who complained about South Africa’s pending copyright laws.

The International Intellectual Property Alliance (IIPA) complained in an 18 April 2019 petition that there was a lack of intellectual property protection and enforcement in South Africa’s pending Performers Protection Amendment Bill and the Copyright Amendment Bill. The IIPA’s complaint led to a review by the US trade representative (USTR) of South Africa’s preferred trade status with the US, under the Generalised System of Preferences.

Established by the Trade Act of 1974, the Generalised System of Preferences (GSP) is the largest and oldest US trade preference programme, which allows duty-free imports from less developed countries.

Speaking from the frontlines of the picket, David Lydall, an organiser with ReCreate South Africa, called the IIPA’s petition a “frivolous complaint” to the USTR.

He said: “The protest action today was organised to hand over our demands to the American embassy… so that they can conclude their review of the GSP in favour of South Africa, because it is harming our economy.”

Sadtu’s head of secretariat, Xolani Fakude, said: “Sadtu joined a number of its social partners today and… we are demanding that the president of South Africa should sign the Copyright Amendment Bill and the Performers Protection Amendment Bill into law.

“The president has had these bills for almost a year now and yet they have not been signed and effected into law, and that is primarily because the USTR has been delaying to conclude the benefits review of the Generalised System of Preferences which are in favour of South Africa, and you’ve got the IIPA which has been lobbying the USTR to sanction South Africa if the Copyright Amendment Bill is signed into law.

“Now, specifically as a union in education, we believe that if the bill is signed into law, it will protect authors and publishers while restraining the excesses of a few publishing companies that exploit markets with unwarranted prices. So, in South Africa you have no more than four publishing companies that are making excessive profits from the learning and teaching support material and they have turned our education into a commodity.”

A memorandum was presented to the US embassy by protesters but it was not formally accepted. The memorandum demanded that the US government conclude the Generalised System of Preferences benefits review in favour of South Africa and “condemn the corrupt lobbying by American corporations through the International Intellectual Property Alliance (IIPA), and their local proxies such as the Coalition for Effective Copyright”.

The Coalition for Effective Copyright has called on President Cyril Ramaphosa to refer the Copyright Amendment Bill back to Parliament for redrafting.

However, international and local organisations have written to the president asking him to make a decision about the Copyright Amendment Bill’s fate and to sign it as a matter of urgency. Blind SA pointed out that he has a constitutional duty to act on the bill, and that if he doesn’t do so by the March 28 anniversary of the passing of the bill by Parliament, then the organisation plans to take him to court.

In terms of Section 79 of the Constitution, Ramaphosa must either sign the Copyright Amendment Bill within a reasonable period, or if there are concerns of a constitutional nature, he can return it to the National Assembly to address those concerns.

When the president signs the bill into law – referred to as assent – relevant regulations will follow.

Meanwhile, the controversial USTR review is seen by some stakeholders as a process that will not be concluded in the near future.

Professor Sean Flynn, the director of the Programme on Information Justice and Intellectual Property at the Washington College of Law in Washington DC, attended the USTR’s public hearing to make his submission in support of the Copyright Amendment Bill.

The USTR review included a call for written submissions as well as a public hearing, which was held in Washington DC on 31 January. Several stakeholders including US businesses, academics and the South African government made in-person submissions.

Flynn believes the USTR review process is not motivated by a sense of urgency.

“The process from here will not be swift and is unlikely to be completed any time soon.

“This programme is designed to justify pressure and influence, not reach quick and decisive conclusions.

“Many countries merely remain on these USTR watch lists of various kinds for many, many years. South Africa will likely be asked to change its laws. But it does not have to,” said Flynn.

The new US ambassador to South Africa, Lana Marks, is of the view that South Africa is not going to lose preferential trade status under the current USTR review.

Forty-two submissions have been lodged with the USTR and written submissions will be accepted until 28 February. Trade and Industry Minister Ebrahim Patel met officials in the US in December last year to discuss the matter and will most likely continue discussions to resolve it.

Unrelated to the USTR review process, South Africa and other selected countries may still be denied GSP benefits in the future. That’s because South Africa was recently included on a US list of developing countries to be graduated out of the definition of a developing country for a standard used in countervailing duty investigations. This reported development has triggered uncertainty in the developing world about US President Donald Trump’s vision for US trade relations should he win a second term. MC