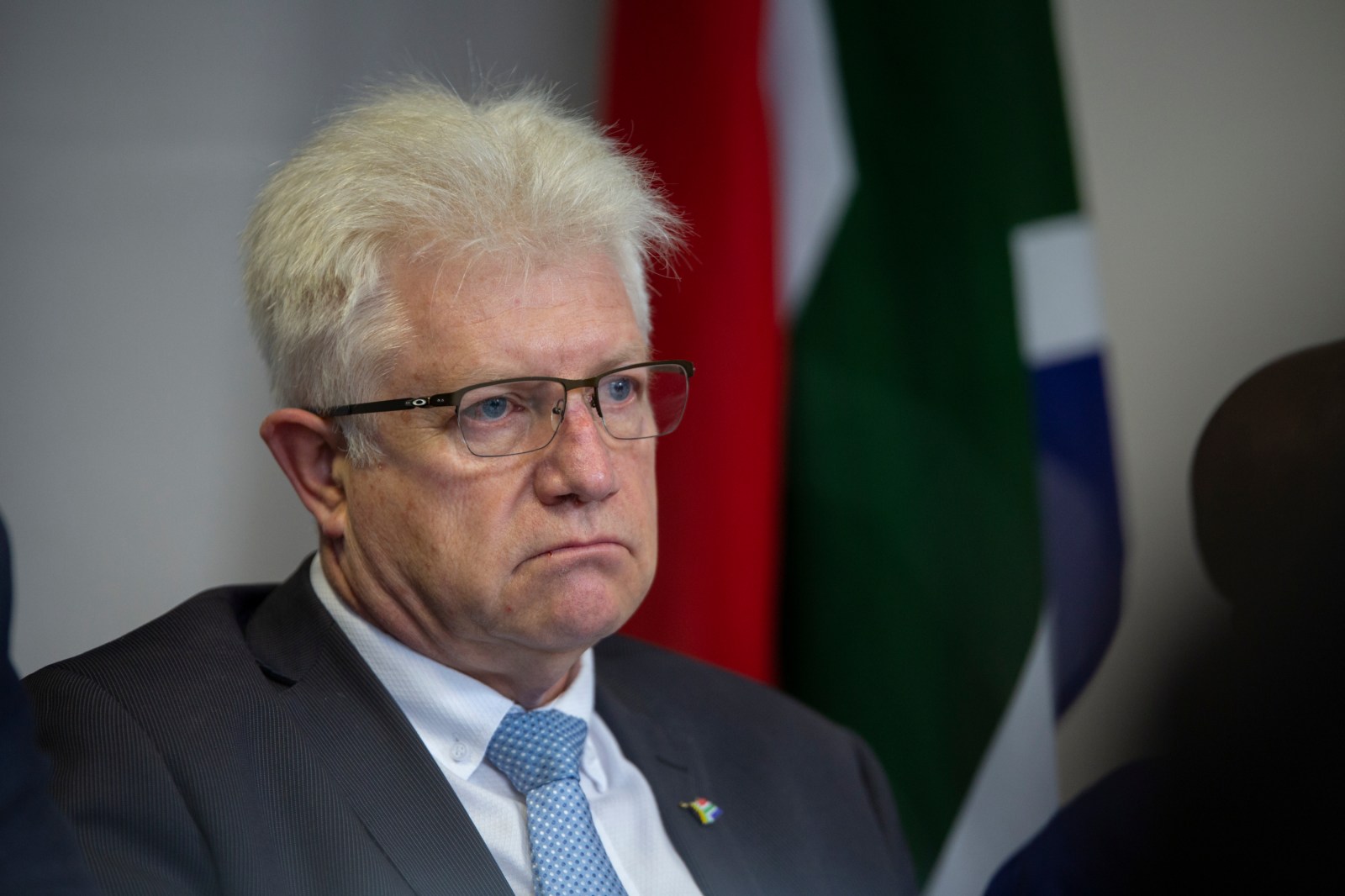 DA's premier candidate for the Western Cape Alan Winde at the DA briefing on the shortcoming of the national South African Police Service in Cape Town, 27 September 2018. Photo: Leila Dougan

Cameron Dugmore, leader of the ANC in the Western Cape legislature, kicked things off, taking aim at Winde’s comments that the occupation of Ahmed Kathrada House and the Cissie Gool House by housing activists Reclaim The City and its supporters was “illegal”.

“The legacy of apartheid spatial planning has left deep scars across our city and province. We were extremely disappointed to hear no concrete plan from the premier to identity and release well-located land and buildings to address the affordable housing crisis in the province,” said Dugmore, who added, “Instead, the premier blames those who occupied Helen Bowden and the Woodstock Hospital immediately after the provincial government and cabinet, of which the premier was a member, decided to sell the Tafelberg site to private interests.”

On transport, Dugmore said, “The solution is not the DA proposal to provincialise rail. It is about working together across all spheres of government… it is only through working together with communities and commuters, Prasa, SAPS and other stakeholders that we will ensure public transport that is safe, reliable and affordable.”

Throughout the debate, opposition parties and the governing DA exchanged verbal blows, ranging from transport to housing, education, corruption, Eskom and even at one point about the controversy within the George municipality.

He added: “The premier says they are committed to spatial integration… but the DA leader in the province only buys the outermost, worst located land for government housing. He refuses to use well-located land that the government already owns.”

But it was African Christian Democratic Party MPL Ferlon Christians who stated clearly, “A provincial police service and Metrorail, yet the premier knows that he does not have the mandate to have a provincial police service… he knows that and yet he makes empty promises to the electorate. He comes with a safety plan that’s gonna cost the taxpayer R1.4-billion… a safety plan that will rot to the end.”

Christians added that the ACDP was working with community structures such as Community Policing Forums (CPFs) and neighbourhood watches that would work alongside metro police and the South African Police Service so crime can be reduced.

“When we came to Mitchells Plain, I heard that there is a fight between the CPFs (community policing forums) and the neighbourhood watches. The CPFs are supported by the ANC and the neighbourhood watches are supported by the DA, so you have problems. If that is true, then these two political parties must shame themselves because a political agenda is driven before the safety of our people.”

In his response, Winde said about the issues between CPFs and neighbourhood watches, “Let’s not politicise it, let’s support it, because they are all volunteers.”

On transport, the premier, who is following the DA-manifesto of provincial rail control, stated: “Who is responsible for Prasa (Passenger Rail Agency of South Africa)?” he said as he pointed to the opposition ANC benches, “because if you can’t, give it to us, so we can make it right”. DM